How To Save a Beauty Pageant: Donald Trump, Steve Harvey and The Memeticization of Miss Universe 2015
Manuel G. Avilés-Santiago / Arizona State University

Be it Miss America or Miss Universe, there is a point at which TV critics and academics intertwine. They both contest that beauty pageants are sexist, outdated formulas built upon clichés that promote highly questionable platforms of women’s empowerment. In an attempt to update pageants, TV networks along with pageant organizers have worked relentlessly to transform these events into a more relevant and attractive format.

From a structural and narrative perspective, pageants have evolved from the traditional formula of a swimsuit-evening-gown-final-question type of event to a more reality-based style of competition. From an audience standpoint, pageants like Miss Universe have opted to capture the Latin American and U.S. Latino/a markets with the incorporation of their symbolic capital into the production, distribution and circulation of the pageant (e.g., Latin American venues, Latino/a celebrities as host/judges, etc.). This is what I refer to as the Latinization of Miss Universe.[1] The process started in 2001 with the celebration of the Miss Universe pageant in Puerto Rico in a prime-time homage to Latinidad that had Ricky Martin as special guest and Miss Puerto Rico winning the pageant. 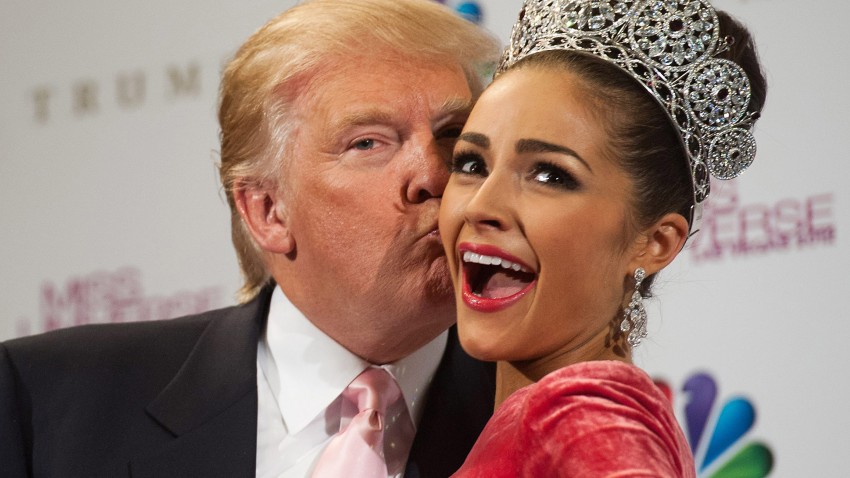 However, this Latinization reached its highest peak in January 2015 when the Miss Universe Organization (MUO) announced a new alliance with the Spanish network Univision. Former pageant owner, Donald Trump, made this unprecedented announcement right after the crowning of Miss Colombia, Paulina Vega, as the new Miss Universe at a pageant that was celebrated in the Latino/a cultural hub of Miami, Florida. With this new merger, Miss Universe cut ties with the NBC-owned Telemundo in order to house the pageant at the number one Spanish-language network in the U.S. As pageant president Paula Shuggart stated, the alliance would “bring unmatched entertainment to the most passionate, loyal audience that Univision offers to one of the fastest growing and important demographic communities in the U.S.” [2]

The Inevitable Overlap of Pageants and Politics

But this Latino love affair ended abruptly when in June 2015, presidential Republican candidate and then-pageant owner Donald Trump said during his presidential announcement that: “When Mexico sends its people, they’re not sending their best… they’re bringing drugs. They’re bringing crime. They’re rapists. And some, I assume, are good people.”[3] The comments became a social media storm not only among Mexicans but also of Latinos of all nationalities. One by one, major sponsors canceled their association with the MUO, which resulted in the biggest blow the pageant ever had. It ended up with Univision backing out of a $6 million contract with Miss Universe and NBC dropping the Miss USA and Miss Universe pageants. Shortly after, the city of Bogotá withdrew the bid to host Miss Universe 2016, and several contestants from Latin America stated their disgust with the comments and threatened not to participate in the upcoming edition of the pageant.

Things changed in October 2015 when WME|IMG bought the pageant from Donald Trump, and, several weeks after the transaction, Fox Network announced that they had acquired the rights to air Miss Universe in December 2015. With Donald Trump out of the picture, the MUO had only two months to plan an event that needed a major public relations plan. However, their approach was to use the same space where the Trump storm started for their own benefit and turn social media into a haven for the pageant.

As I was conducting participant observation and online ethnography during the most recent celebration of Miss Universe in Las Vegas, Nevada, I was able to identify four social media strategies implemented by the MUO:

1. Social Media Ranking and Take-overs
Upon their arrival, the 80 contestants were asked by members of the MUO to share their social media handles. Then, the MUO gave the delegates with the most followers the opportunity to do take-overs for a day of one of the MUO official accounts on Instagram, Facebook, Twitter and/or Snapchat. Some of the contestants selected to do this task were the delegates from Australia, Colombia, Dominican Republic, India, Philippines, Thailand and USA. The contestants would announce their participation on their personal social media before taking over one of the MUO official accounts. All of these contestants (with the exception of Miss India) were semifinalists. 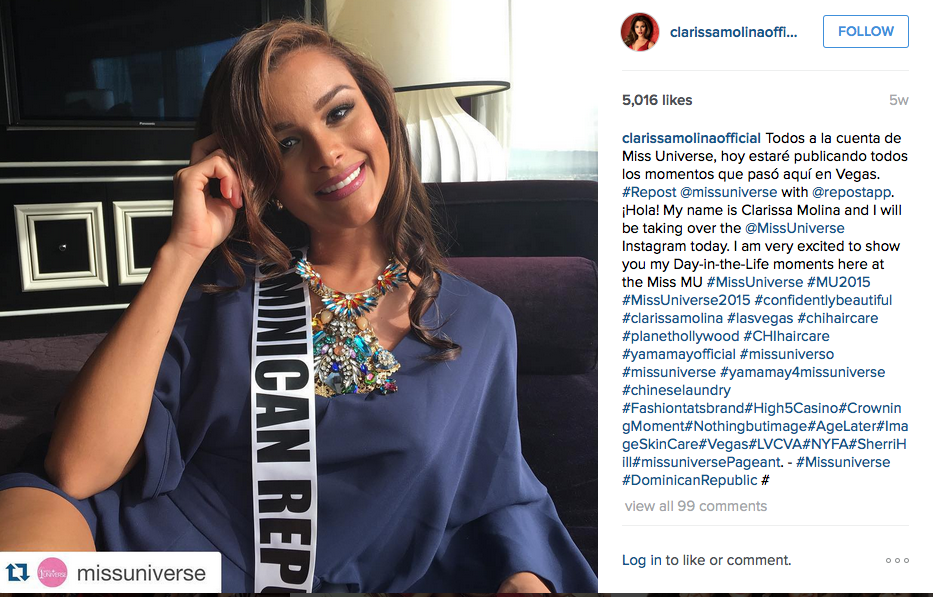 All 80 delegates were asked to act as content producers and curators. They were emphatically encouraged and guided on how to produce videos and pictures and use the #hashtag when uploading pageant material. From the first day, they were encouraged to use #missuniverse, #confidentlybeautiful and to include the major sponsors of the pageant. They were also told to include the tune-in information in both, English and Spanish.[4] In that regard, the contestants became not only independent storytellers, but also a global advertising platform for the pageant.

Online voting is not foreign to beauty pageants. Since the advent of the Internet, Miss Universe has included online voting for special awards like Miss Photogenic. However, this year, the MUO gave special emphasis to online voting. From the beginning of the competition, the delegates were asked to request their followers to stay tuned for an online vote. The first rumor was that the audience would be in charge of selecting one of the semifinalists by popular vote. Then, the dynamic changed to the audience acting as one of the five judges during the live telecast. The online voting system was called the Miss Universe Global Fan Vote, and the scores produced were added to the vote of the celebrity judges Emmitt Smith, Niecy Nash, Olivia Culpo and Perez Hilton [5] .

4. The Possibility of a Viral, Memetic Moment

During the last decade and after the invention of YouTube in 2005, beauty pageants have become a central space for producing so-called YouTube moments. The live element of the pageant leads to situations like the failed attempt to answer the final question formulated to Miss South Carolina Teen USA 2007 and the two-years-in-a-row misstep of Miss USA (2007 and 2008) that lead them to fall on stage.

This year’s Miss Universe needed to become a central scenario for a viral moment. The pageant added the figure of comedian Steve Harvey as a host who peppered the event with funny—often irreverent—comments throughout the competition. Also, there was not only one round of questions, but two. The first one revolved around controversial topics such as gun control, drug trafficking, terrorism, the legalization of marijuana and the U.S. military presence around the world. However, up to the final round of questions, no YouTube moment was produced.

It was not until the crowning moment that probably one of the most memorable YouTube moments in the history of beauty pageants was prompted by Harvey announcing that Miss Colombia was the winner and then realizing he had made a mistake. She was actually the first runner-up, and Miss Philippines should have been crowned. The situation was even more complicated because it confronted two of the biggest factions of beauty pageant audiences: Colombians, who wanted a back-to-back win, and Filipinos, who were looking for their third crown since 1973. In fact, the Philippines produces not only the largest but also the most passionate audiences. For example, the annual video of the live-reaction of Filipino fans during the pageant has become a YouTube sensation generating millions of views.

Something similar happened with Steve Harvey’s incorrect announcement. The video of the live mistake has not only generated millions of views but has also achieved memetic spreadability, which means an “extensive creative user engagement in the form of parody, pastiche, mash-ups or other derivative work.” [6] Social media exploded with images from the event, and thousands of memes, Photoshop jokes and other graphics on Imgur have been circulating for weeks. As never before, Miss Universe achieved occupying a prominent space in traditional forms of media by becoming the hot topic in the news and other variety shows with an unprecedented massive coverage of the event. Everybody knows who the winners of Miss Universe 2015 were. 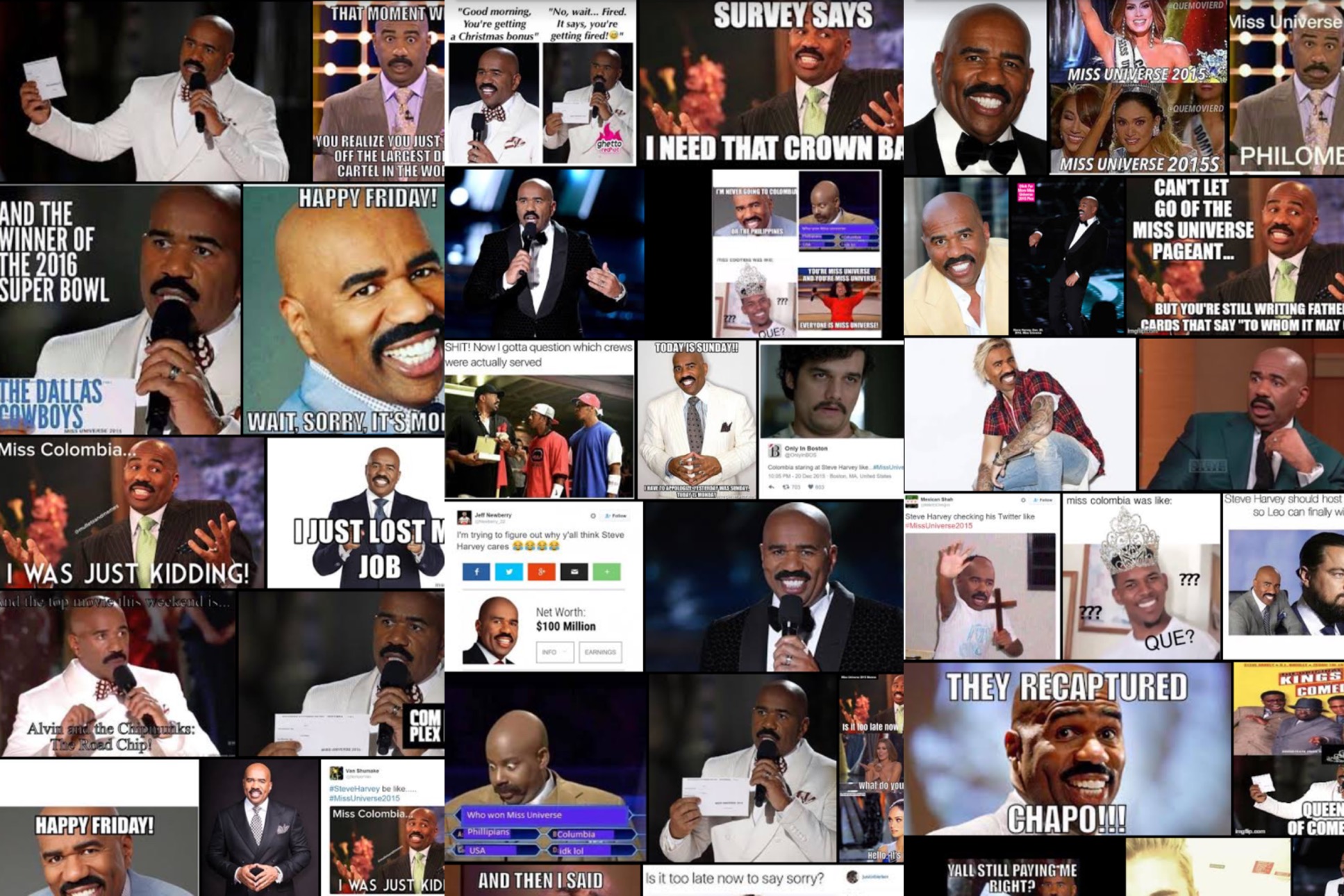 The Memeticization of Steve Harvey

The Miss Universe pageant did not manage to produce more ratings in comparison to the previous edition. Fox’s telecast had 6.2 million viewers and a 1.7 rating among adults 18–49 on Sunday night, which represented 15 percent less in the demo and 18 percent less audience compared to last year. However, #missuniverse became a trending topic, and the pageant is still a topic of conversation almost a month after the event. The social media spreadability of Steve Harvey’s mistake has made the 2015 Miss Universe one of the most memorable and memeticized live events in the history of television. While writing this column, it was confirmed that the MUO invited Steve Harvey to host the 2016 Miss Universe competition, which is expected to take place in the Philippines.[7]