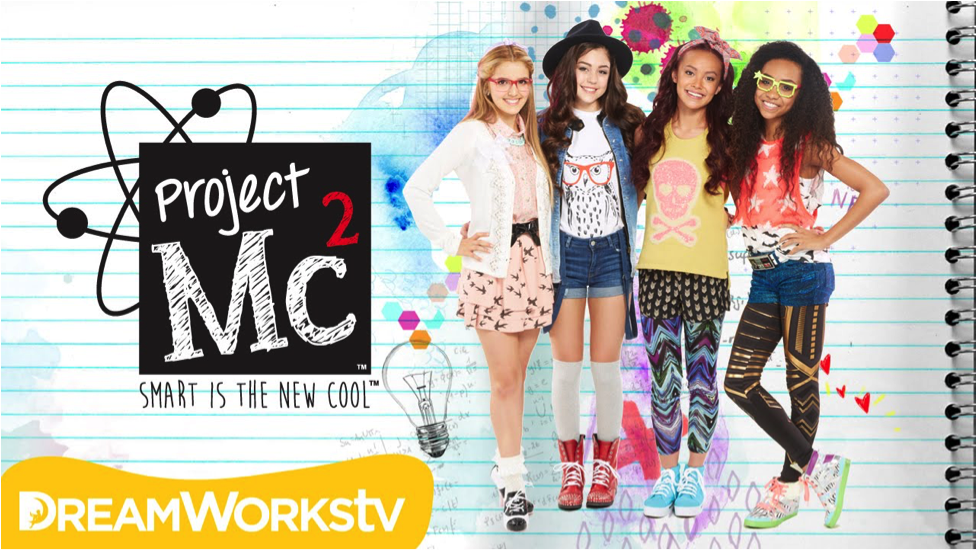 At the 2015 New York City Toy Fair MGA Entertainment, makers of Bratz and Lalaloopsy, introduced its new initiative, Project MC2, which targets girls 6-13 and seeks to get them excited about S.T.E.M. through a branded toy line, app, interactive website, social media campaign and a Netflix series produced in conjunction with DreamWorks’ AwesomenessTV, all launching simultaneously in September 2015. MGA CEO Isaac Larian explained that he was troubled by the low enrollment of women in college engineering programs harkening back to his own undergraduate days when he majored in civil engineering at Cal Tech and had only one female classmate. Larian stated that his hope was that Project MC2 would contribute to a woman becoming the next CEO of Microsoft or Google (though tellingly not MGA). [1]

While Larian’s hopes for Project MC2 are likely genuine (at least in part), the timing of his renewed concerns needs to be understood not just in relation to the ongoing gender gap in S.T.E.M.-based careers, but also in relation to the inroads made by startup companies like GoldieBlox and Roominate in securing very limited shelf space in stores like Toys-R-Us and Wal-Mart, not to mention the crowdfunding success that they, iBesties and Trobo the Storytelling Robot have found, indicating a growing market for toys that challenge gender norms and encourage girls to engage in S.T.E.M. activities. GoldieBlox had over 5500 backers on Kickstarter and in addition to raising $285,000 (exceeding their $150,000 goal in just 4 days), the company received pre-orders north of $1,000,000 when it launched in 2012. It is currently available in more than 6000 retail outlets worldwide. Perhaps most importantly for MGA, GoldieBlox’s latest products are girl engineer and programmer “action figures,” shifting its primary competition from construction-based toy companies like LEGO and Mego Blocks to doll lines like Mattell’s Barbie and MGA’s Bratz. [2] 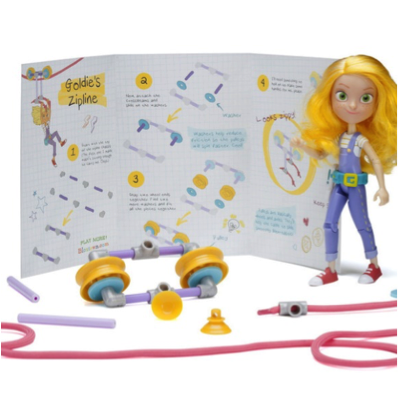 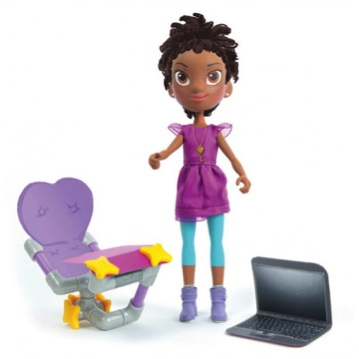 Where S.T.E.M. toys for girls have up until now largely focused on construction sets, companion dolls/action figures like Goldie Blox, Rubie Rails and iBesties are now entering the market.

None of this is to say that Project MC2 isn’t a sincere attempt to capture girl consumers and ingratiate them into the wonders of S.T.E.M. The brand features four teenaged female friends from diverse racial and ethnic backgrounds and with diverse skills who work for a spy organization run by women called Nov8 (pronounced “innovate” but also the date for National S.T.E.M. Day). Though the premise lends itself to action and adventure, the Netflix series and website make clear that these girls use science and engineering to solve cases. The series stresses female friendship and the importance of girls working together and supporting one another. It also depicts the four protagonists as not only comfortable in their own skin but also fashionable and conformist (they are not depicted as outcasts for their interests nor are they made to “stand out” among other girls. They are smart, cool, and accepted).

Project MC2 has also tapped Danica McKellar, former star of The Wonder Years (1988-1993) noted for earning a degree in math and then publishing several books directed at girls about the topic as Nov8’s director, codename The Quail. McKellar bring “authenticity” to the project (all of the other characters are portrayed by actresses with no touted S.T.E.M. skills) and in many ways embodies MGA’s approach to feminizing S.T.E.M. Her bestselling book Math Doesn’t Suck relies on examples like learning how to properly create a shoe shopping budget and using ratios to determine whether or not to be into a guy in order to supposedly make math “relatable” to girls’ experiences. Likewise, Project MC2 positions S.T.E.M. as just another facet of (stereo)typical girlhood (though the Nov8 team is exceptional, the girls are presented as equally concerned with their appearance as with saving the day; as simultaneously capable of mooning over Prince Harry – the dimwitted celebrity they are assigned to protect – as they are the advanced tech that Nov8 uses).

With the Netflix series providing a playable storyline that can be acted out through product acquisition, Project MC2 utilizes immersion and extractability strategies to move consumers across product(ion) sites. The dolls are dressed in the exact same outfits as the characters on the series and come with experiments that kids can perform at home drawn directly from things shown in the series. For example, the Adrienne Attoms doll comes with an erupting volcano experiment that the character performs as part of her initiation into Nov8. Yet, it is telling that most of the “gear” extracted from the series focuses on benign rather than disruptive experimentation. While some of the tools the Nov8 team uses in the series might be difficult to recreate at home without exceeding MGA’s $14.99-$49.99 price-point, it is worth pointing out that Netflix’s Adrienne Attoms also demonstrates how to lift fingerprints using a quarter cup of flour and two dashes of cinnamon while the characters of Bryden Bandweth and Camryn Coyle are able to build a camera pen and a portable police scanner out of spare parts. Their dolls, however, come with experiments that demonstrate how to make a glow stick necklace (worn by Bryden) and how to assemble a mini plastic version of Cam’s customized skateboard. In other words, where the show features characters’ adept at creating surveillance technologies, the “gear” available for purchase focuses on items that are intended to be looked at. In other other words, the Project MC2 brand is geared toward encouraging girls to see S.T.E.M. as a lifestyle amplifier tied to traditional notions of girlhood rather than a way to push back against existing gender scripts. 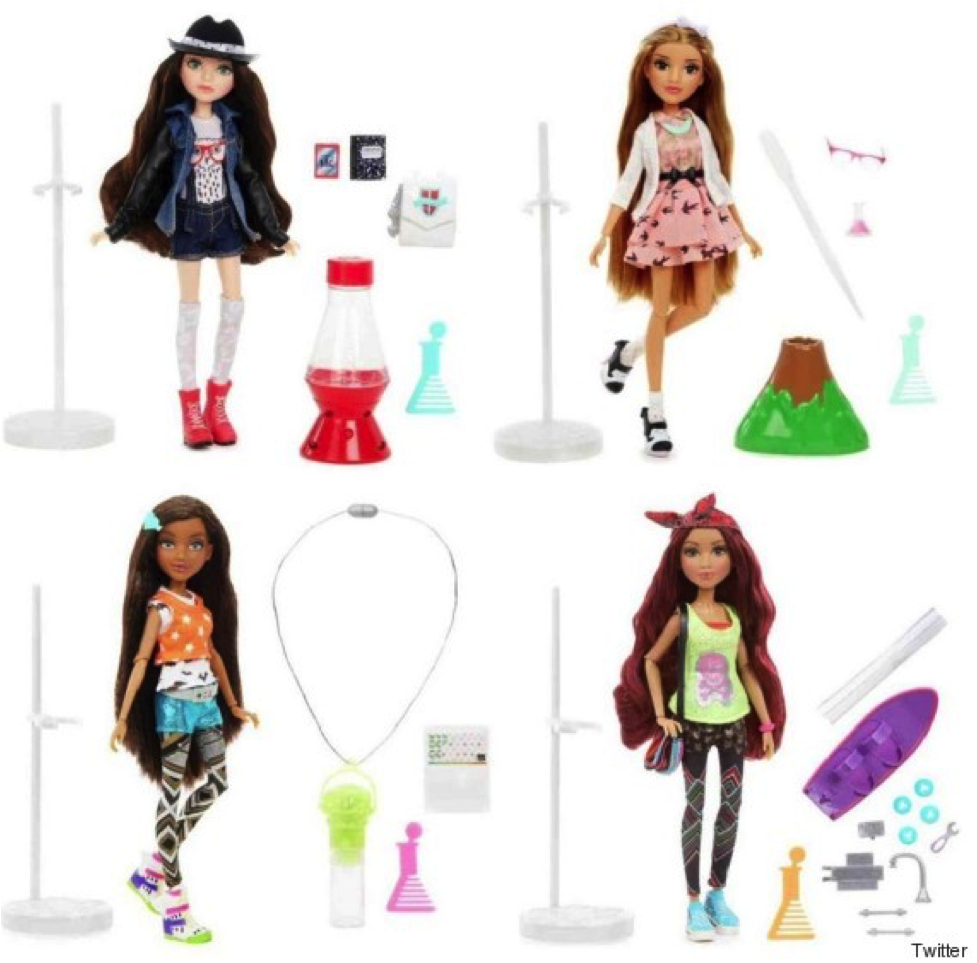 Project MC2 dolls come with experiments and fashions drawn directly from the Netflix series. Note the beaker-shaped combs, which exemplify MGA’s efforts to combine Bratz’s fashion and beauty focus with a new emphasis on smarts. 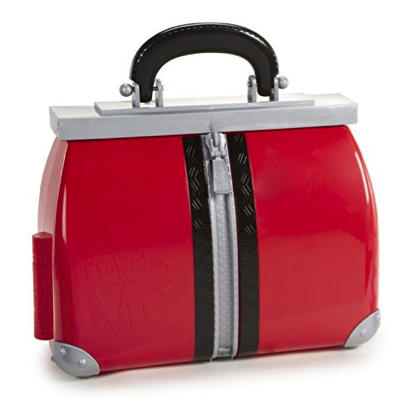 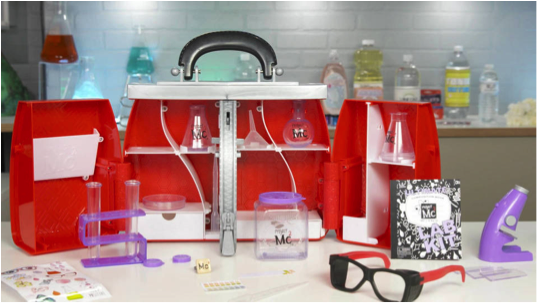 The Project MC2 Ultimate Lab Kit is another accessory used on the Netflix series that is intended to make S.T.E.M. stylish.

AwesomenessTV’s promotional materials for Project MC2 in some ways best reveals MGA’s approach to getting tween girls to invest in S.T.E.M. as a lifestyle brand. Awesomeness produced several short videos where the stars of the series are interviewed by Ashley Adams, host of the web series Foodie Face about topics like how to make homemade acne prevention cream and sunburn masks. These paratexts help bridge the brand’s interests in both science and style by focusing on how household concoctions could be used to keep a girl looking her best.

While this seems a far cry from the series’ “spies save the world with S.T.E.M.” premise, it isn’t really: the characters on Project MC2 are all about celebrating and documenting their awesomeness, regularly breaking out in “go us” chants and constantly uploading selfies to Instagram. While there is nothing wrong with girls expressing excitement about their accomplishments, the characters on Project MC2 verge on narcissistic. Mirroring this, AwesomenessTV also produced a series of unboxing videos featuring each actress squeeing over her doll. The spots focus on their palpable excitement over seeing their faces on the packaging and the ways their outfits have been carefully reconstructed for the dolls. Each girl talks about how the clothes worn by their character both captures their fictional and real personalities. There is nary a mention of whether the actresses have come to appreciate S.T.E.M. through their embodiment of these characters, but it is clear that they have come to appreciate the coolness of their characters’ geek chic looks. Not surprisingly, Larian recently announced MGA’s search for licensing partners to produce a line of Project MC2 inspired clothing and accessories. [3]

Mika Abdulla unboxing her doll. Note the focus on style over science (presented as easy and fun) and the slippages between herself and her character.

Another promotional paratext prepared by AwesomenessTV that drives home the significance of style in making “smart the new cool.”

Selling Project MC2 as a lifestyle brand that uses S.T.E.M. to express one’s individual style might actually entice some tween girls to buy in to the concept as much as the products, but lifestyle brands also typically privilege external expressions of personality over character or skill building tools, which risks promoting S.T.E.M. as cool without making it any more accessible to girls who are otherwise regularly told that they aren’t any good at math or science. Project MC2 offers to give S.T.E.M. a product makeover; I’m just not sure it is intended to actually excite girls about the process of experimentation, either with S.T.E.M. or gender norms. 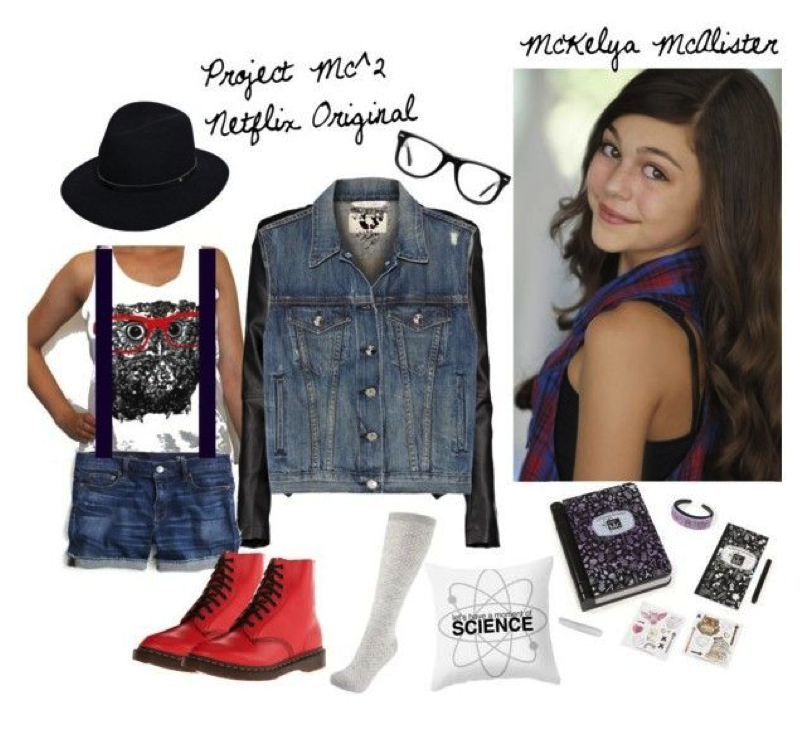 The Project MC2 lifestyle brand focuses on making the S.T.E.M. look trendy for tween girls without much focus on the need for actual S.T.E.M. knowhow.