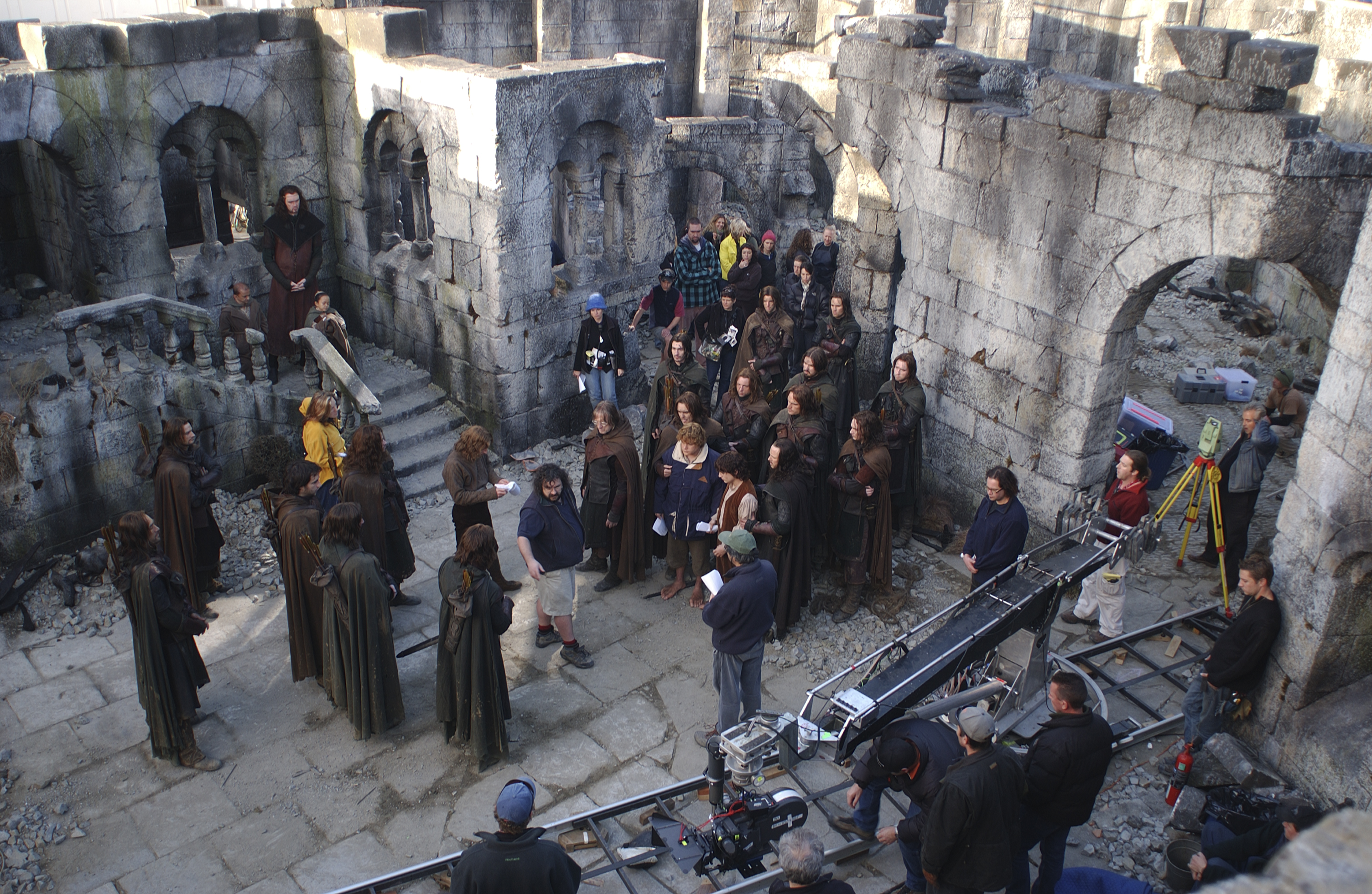 “A love-letter to a fandom I’m not really in anymore”: That’s how Gwenfrankenstien describes her vid, “Long Live,” a Lord of the Rings fan video made from the Return of the King DVD extras, edited to Taylor Swift’s anthem of the same name.

I find Gwenfrankenstien’s description of her vid very evocative. “Long Live” captures the power and the transience of the fan experience, and I’m saying that as someone who is not really a Lord of the Rings fan by any definition. But I’m still moved by this vid every time I watch it. In part, I’m struck by its vision of the journey shared by media producers as they (re)create a fan-loved media text. The Taylor Swift song’s proclamation “long live the magic we made” helps amplify the vids’ vision of the producers and actors of Return of the King coming together, via technology, performance, and creative teamwork to transform a collective imagined fantasy into a filmed reality. The magic, it suggests, is in the lived process of that creation as much as (if not more than) in the final product, and thus cannot be fully contained in the form of a movie or even in DVD extras. “Long Live” celebrates the vision and determination of media producers, and (to me at least) in doing so likens their community experience to that shared by fans. Indeed, I can’t help but see fans not only as the recipient of this video’s love letter, but as represented by proxy in its images of producers, actors, interviews, and award shows.

While I’m not part of the particular fandom represented here, I am part of a different sort of fandom that was also the intended audience for “Long Live,” the vidding fandom, that is, fans of fan-authored remix videos. This video was made for Festivids, an annual fannish vid exchange. Many festivids vidders also participate in Vividcon, an annual convention in which vidders submit premiering and recent videos, and host vid shows and panels on particular subjects of interest to vidders and vid-viewers. I saw “Long Live” for the first time in the “Nearly New” vidshow at Vividcon 2015. I was especially struck by how connected I felt to this video about a fandom I wasn’t in, which I was watching within a fan community that precisely brings together multiple, diverse fandoms, with participants connected together by their love for a particular form rather than a particular source text.

Although the multiplicity of fandom is a core feature of both Festivids and Vividcon, that multiplicity isn’t without its friction points, friction points that emerge from the power and transience of fandom highlighted in Gwenfrankenstien’s vid. The Vividcon vidding community has evolved over the decades across not only the rise and fall of multiple fandoms, but also over multiple interfaces held in tandem, built on prior histories of vidding and fan conventions. Francesca Coppa and Henry Jenkins have written about early years of vidding, the cultures of vidding collectives working with the technology of dual VCRs [1]. They and other scholars have argued that since its origins in the 1980s, through into the era of digital editing, vidding has fostered often-female communities of practice in which fans turn video authors, taking ownership of and speaking back to mainstream media, and in so doing developing alternative aesthetic traditions and perspectives. 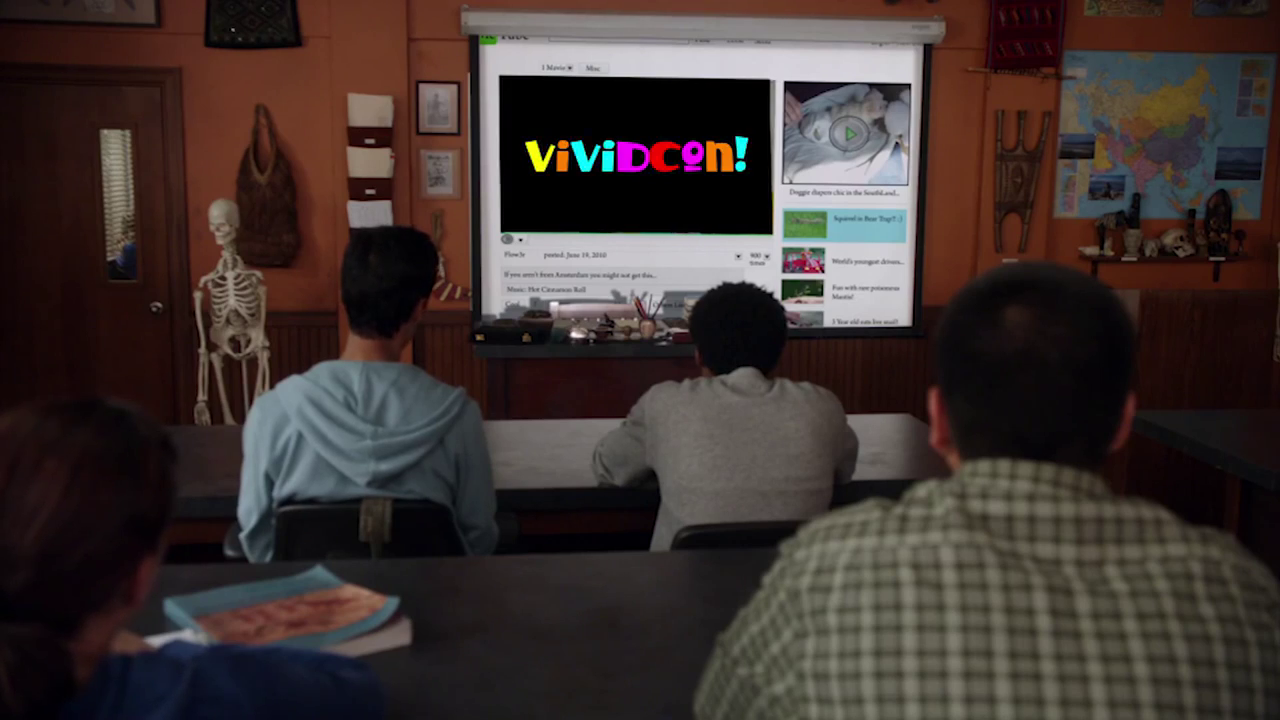 When I began to participate in vidding in 2006, vidders mostly shared their videos in locked communities or behind password protected servers. Even as YouTube grew in popularity and breadth, vidders were very tentative about sharing their work there for fear of copyright takedowns and IP issues. As Francesca Coppa has argued, this tentativeness threated to erase the creative work of the mostly female vidding community while the more often male remix artist were posting their work publicly on YouTube [2].

But at the same time that Vividcon vidders were hesitant to post on YouTube and to share their work publicly, new fan video traditions were evolving on YouTube. There were and are many vidders and fan vidding communities on YouTube that did not necessarily emerge from or align themselves with the traditions of Vividcon and/or VCR vidding. The vids that these “YouTube vidders” (as they are sometimes called) created/create look significantly different from the still dominant aesthetic at Vividcon, one which highlights professional-feeling clean cuts, minimal special effects, music rather than dialogue for audio, and linear, legible narrative or analytic structure [3]. In contrast, many “YouTube vids” layer dialogue as well as image, and incorporate filters and overlays, sometimes/often in abundance.

At Vividcon, congoers have debated the relationship between the Vividcon community and other evolving fan vidding and remix traditions, aesthetics, and interfaces for sharing, in panels like the 2007 “Town Hall on Vidding and Visibility.” At the 2012 Vividcon panel entitled “Forever Reblog: Vid Audiences on Tumblr, Twitter, YouTube, etc.,” we talked about whether vidders should experiment, migrate, and embed these new interfaces and/or the aesthetics evolving on them. The overall tone was open and encouraging, with people giving tips about how to publicize, self brand, and link across interfaces.

Now, in 2015, Vividcon has grown in tremendous ways—most notably its streaming vidshows that have allowed greater access to those unable to attend the conference in person. Its panel and vid show topics continue also to encourage a diversity of approaches, perspectives, and fannish identification. And yet I fear that the vidding community might still be facing its own transience—that it might not live on if it does not enter more fully into conversation with evolving fan video and remix video cultures. Yes, Vividcon has a Tumblr and many vids circulate on Tumblr, and a fair amount of vidders post their work to YouTube as well as to Vimeo. But an us versus them/ours versus theirs mentality still lurks, not shared by all, but it’s there, arguably motivated by an understandable fear of loss—loss of the aesthetics, culture, and values specific to the vidding/Vividcon communities.

For me there was one vid at Vividcon 2015 that stood out, in part because it spoke to these issues and in part because it seemed to me a poignant counterpart to “Long Live”: Millylicious’ 2015 Vividcon premiere, “Landslide.” This Harry Potter vid conjures up the specifics of the passage of time for Harry Potter and its fandom, through the powerful conceit of a Hogwarts point of view (at least that’s how I read it). I find myself especially moved by this video, as I am currently re-engaging with Harry Potter through the eyes/ears of my eight year old daughter and thus am very aware of Harry Potter fandom as something past and present, continued yet fundamentally different from what it was. Harry Potter lives on but its initial fandom movement was specific to place, time, interface, and technology.

And yet I don’t read Milly’s “Landslide” as only about Harry Potter and HP fandom, to me it is about fandom’s evolutions and revolutions and changes more broadly, and now for me at least it is also inextricably about Vividcon specifically, the changing culture there, and the vidding cultures that are growing in other interfaces with other sets of aesthetic norms and expectations. Vividcon vidding and community is not what it was, even as many vidders still hold up strict lines to defend against the more diverse practices of vidding in YouTube, Tumblr, and fan culture(s). I don’t think that VVC and vidding should erase those boundaries from history, but if they/we don’t move forward in more open ways, I fear we may face endings rather than evolution, a practice tied to a moment and its technologies rather than one fluid enough to move into new but related traditions that stand on the backs of old ones.

I believe we must honor the specifics of communities and specific fan practices while acknowledging and embracing the larger cultural creative frameworks that contain diverse practices. Let’s not reify cultural divides in our self-definitions of media fans and fan practices.