February 11, 2014 Michael Newman / University of Wisconsin at Milwaukee One comment 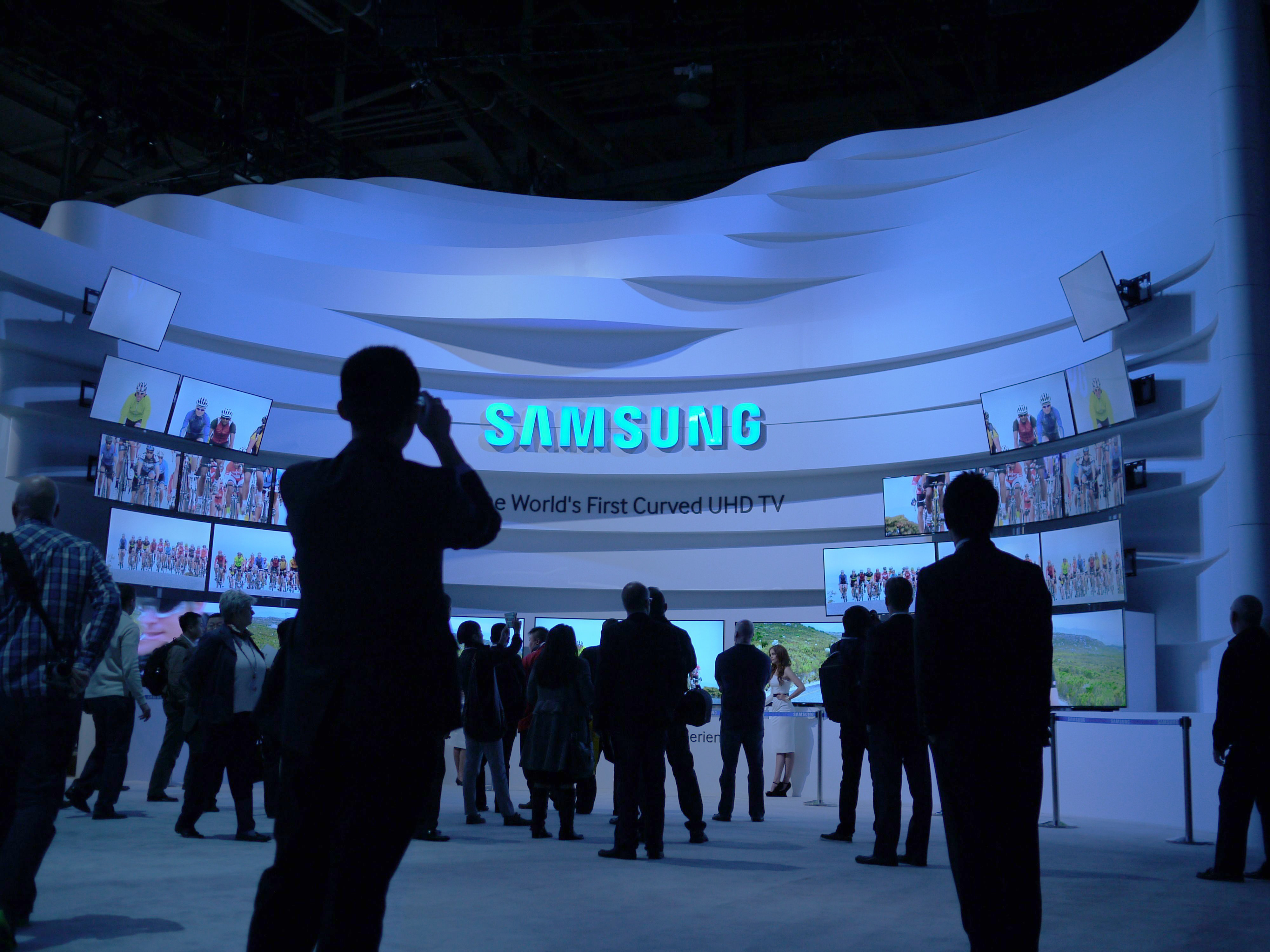 LG’s booth at the 2014 Consumer Electronics Show in Las Vegas is filled with screens of many sizes and appeals. A sales rep in his twenties is going through a 30-second spiel selling a gadget his employer is eager for us to talk about. “What happens,” he explains, “is that it will immerse you in it.” What will do this to me is a 6-inch smartphone. LG’s pitch isn’t size per se, but the novel curved form of this new rectangle, which inclines at either end like the edges of a shallow bowl. Pressed to describe the benefits of a mobile device that isn’t a flat tile like all the others, he leans on his talking point: “the actual feeling of it, the immersive part.”

Immersive, a tech buzzword of the moment, might seem to describe a pleasurable state of absorption, something like the “flow” or being “in the zone” that people often crave. Just as the business of consumer electronics wants to be selling new products all the time, it also likes to have new language to sell them, and immersive speaks to current hopes and fears. Along with it come terms like smart and connected, and novel product categories like wearables have names insiders seem to take pleasure in saying. Like interactive and multimedia, two of yesteryear’s sizzling tech terms, these are power-packed units of a language that speaks through individuals, corporations, and their publicity battalions in support of an ideology of consumerist leisure. The ultimate goal of those displaying immersive (or smart, or whatever) on walls inside CES, repeating it ad nauseam as a talking point in exhibit demos, and hyping it in keynotes, is to sell this year’s wares while making last year’s undesirable. The immersive artifact could be a smartphone, a television, a gaming headset, a hi-res audio player, or a website or app; to be immersed in it might mean to become lost in limitless pleasures of information and entertainment. 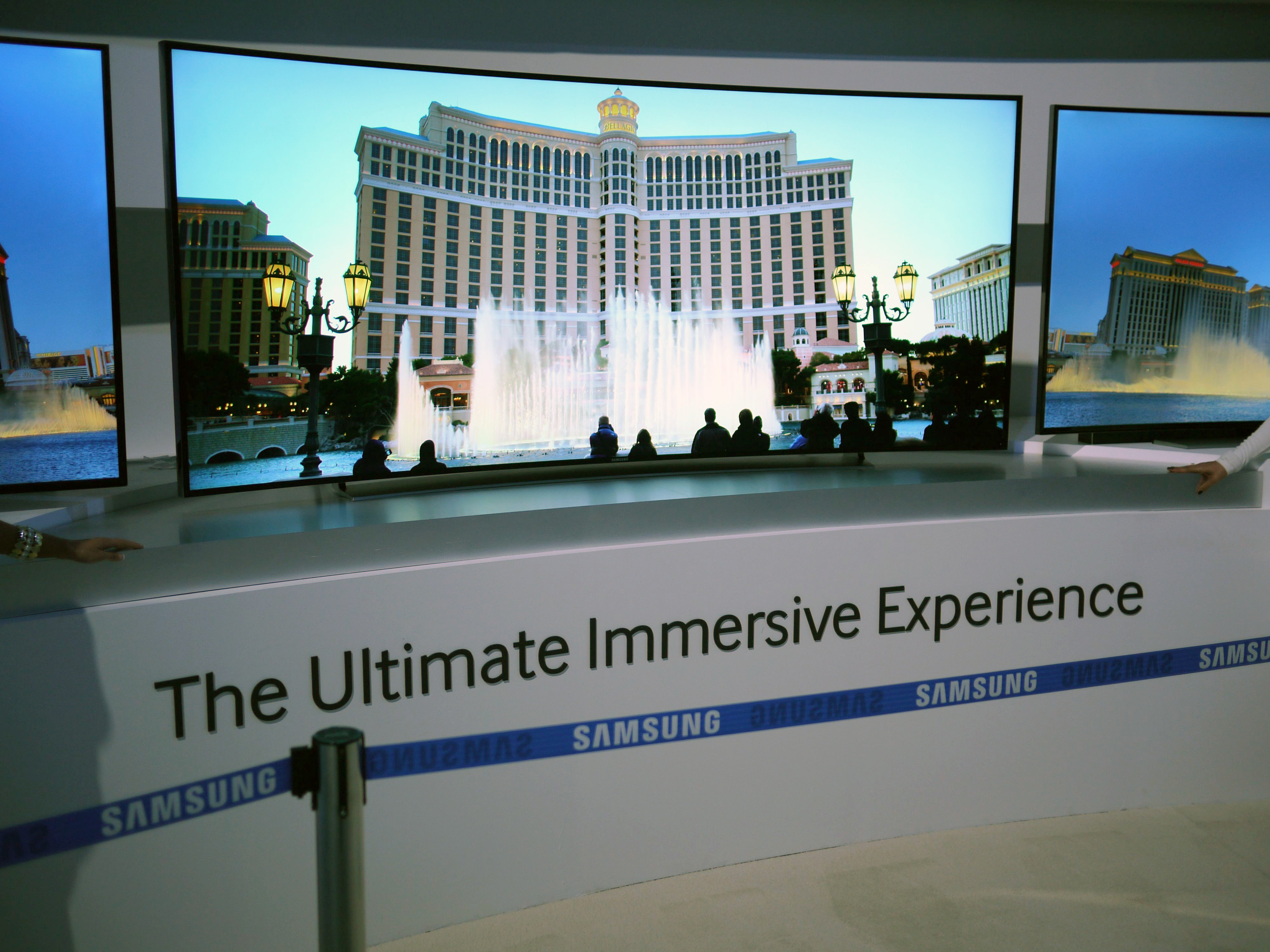 Of the many products described as immersive at this year’s CES, the ones getting the heaviest buzz and craziest crowds were the TVs. Some are curved like the smartphone (and many cinema screens today), but the bigger selling points are their ultra-HD picture resolution in the 4K format (next year maybe they’ll be 8K), their enormous size, and in some instances their OLED screens, which amplify contrast and present true color values. Some are 21×9, which will please cinematographers and aspect ratio connoisseurs. These televisions are so big you supposedly build your house around them. One 85-inch UHD currently for sale fetches $40,000 (cue amusing Amazon reviews).

The 4K format has roughly twice the visual information of the current standard HD resolution of 1080, which is similar to the 2K format of many digital cinema projectors. The pictures look good big. On the TVs I saw, images were very bright, colorful, and crisp. 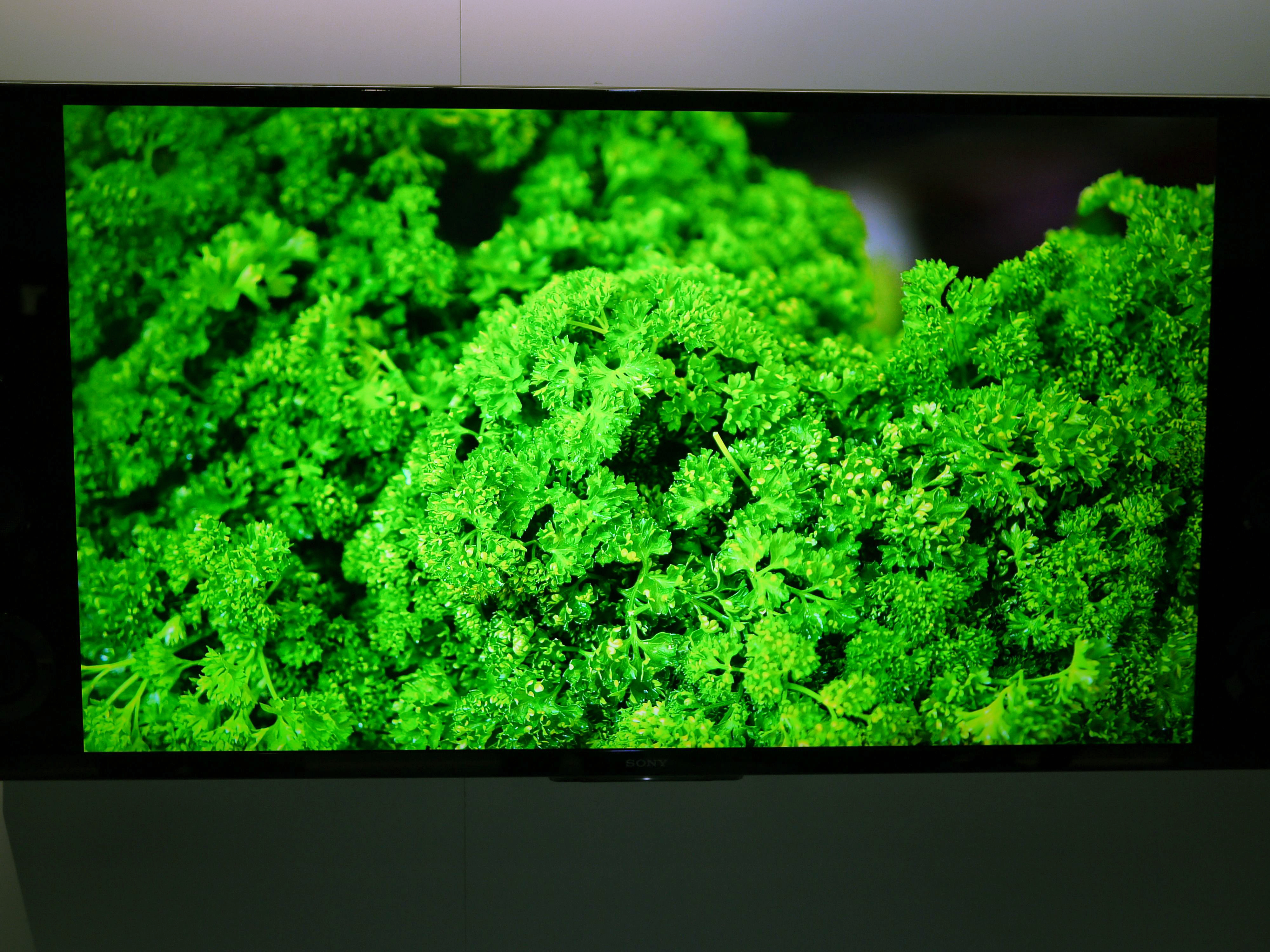 No one said it explicitly, but what I heard in descriptions of these images was that the hyperrealism of UHD is supposed to be transporting and illusionistic. The beholder might mistake the image for reality, and feel that they are present in the representation. Little commercial media has been produced at 4K resolution, and demo imagery was prepared specially for the show. Shots of the Vegas cityscape and natural wonders (even food porn) might prompt thoughts about just how different it would really be to see these sights unmediated. I will admit to having one of those “I’ve never seen that” reactions, though maybe I’m easily impressed, and it was my first time at CES. 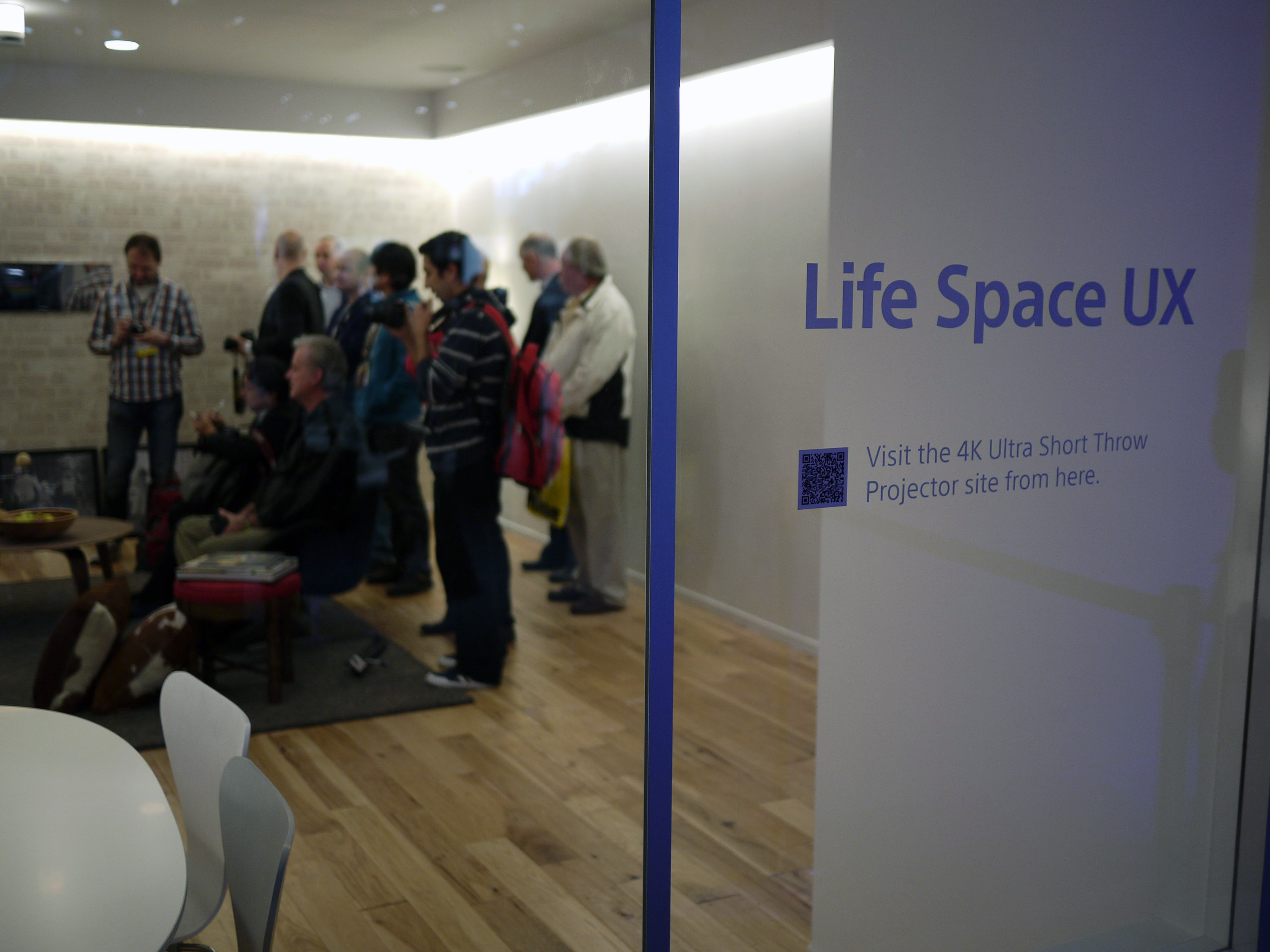 This quality is intensified in Sony’s Ultra Life UX demo, a model apartment with a queue outside in which I waited my turn in the immersive video mockup. The centerpiece is Sony’s short throw 4K projector, which can show an image of up to 147 inches issuing from a console sitting against the very wall on which the picture is displayed. The same room has projectors by the pot lights and pendants throwing UHD images onto a tabletop (which becomes a touch interface computer display) and even above the sofa where the spectator sits. As an image shot on a Paris street is projected on the wall, the starry sky above is represented on the ceiling, and sounds of the location are amplified by the room’s stereo system. 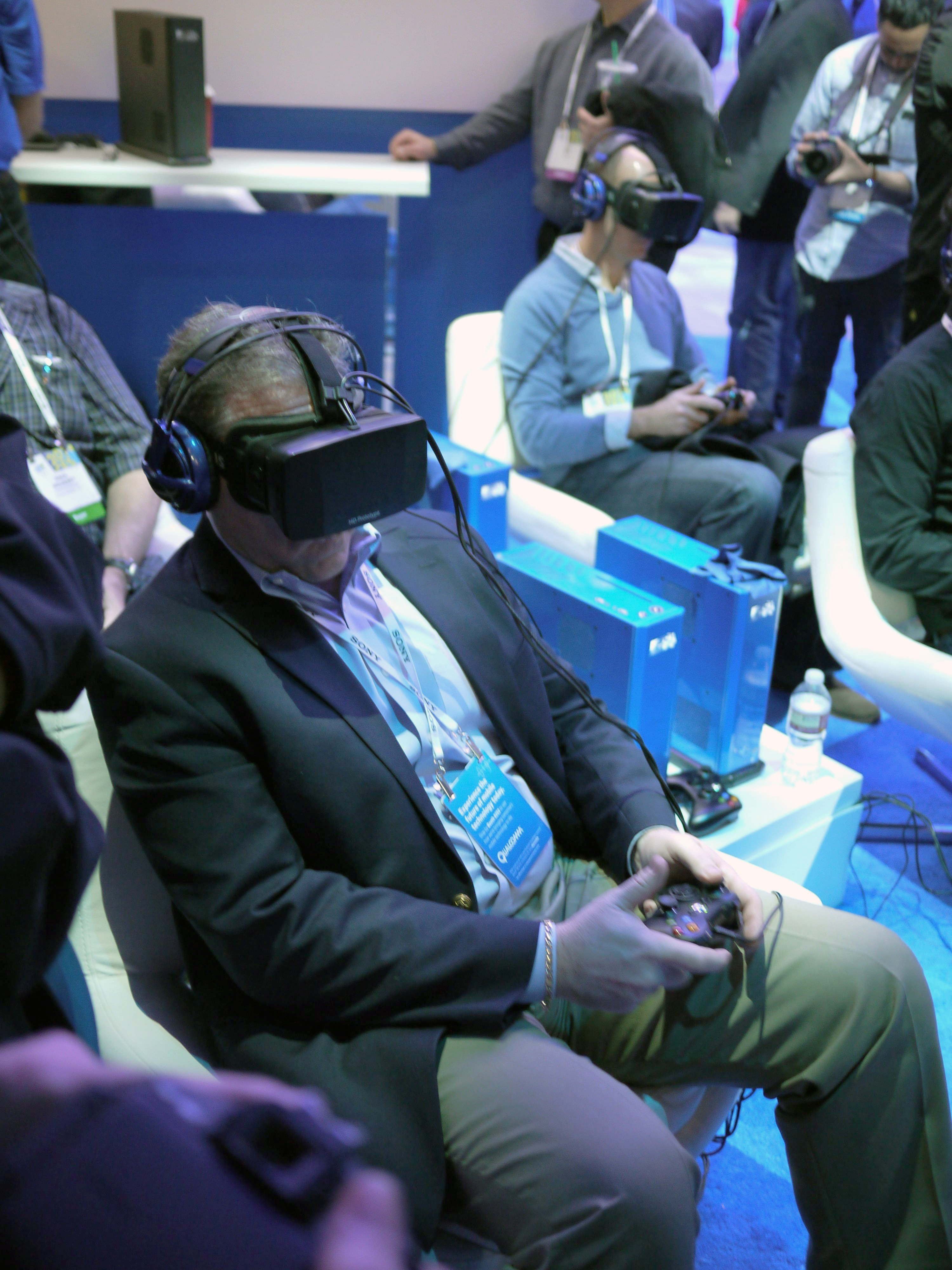 The sense of being enveloped by video is undoubtedly strongest, according to the logic of immersive tech, in gaming that uses the Oculus Rift virtual reality headset in place of the usual screens. I was too impatient to wait in the long line at Intel’s corner of the Convention Center, but I hung around as a booth rep gave a bombastic monologue. Four CES attendees sat playing a fighter pilot game with VR headsets strapped on their faces, and above them Intel’s man addressed a throng a onlookers. After assuring us that only because “Intel is inside” is the product so cool, he continued, gesturing at the players whose bodies were beside us but whose souls were evidently elsewhere: “They are Tom Cruise! How immersive and how real it feels!”

It’s not only the moving image that the tech world thinks of as immersive. The same idea has been used to promote the redesign of the New York Times website, which has replaced page navigation with scrolling and accommodates more multimedia elements with bigger images. The Times would like to engage readers deeply, the better to serve them advertising. The old model of chasing pageviews has been abandoned as new metrics and conceptions of audience value have emerged. The idea of this audience’s behavior is not so different than the video or gaming scenario, though: the individual is arrested by technology and design of media, ushered into a pleasurable state of absorption in representation full of attention and focus. Sometimes tech hype about users and their desired habits of attention becomes confused by its own rhetoric. When Marissa Meyer, addressing a packed theater for her keynote, pitched a Yahoo! news app’s content as both “bite-size” and “immersive,” I wondered how she got from A to B. But the underlying message is consistent: your precious users will never leave you. They will lose themselves in your product and be yours forever.

The owner of a UHD set may find value in being immersed or transported, perhaps even in fooling the eye that a two-dimensional array of pixels is real, though the product is too new to know what social significance if any it will come to have. This type of TV set is being sold as the new hot thing not to satisfy any widespread public clamoring for more vivid and lifelike video, but because of other products’ recent failures. The inability of 3D and “smart” televisions to coax consumers to improve upon 5 or 10 year-old HD sets means that the companies exhibiting at CES need something else to sell, something new to fill the tech press’s pages. Perhaps picture quality will succeed to persuade early adopters unimpressed by stereoscopy and web widgets. Recent trends are not encouraging for sellers of TV sets, and at least for a time they will face the same problem as they did with 3D: insufficient content in the new format. Even if producers shoot in UHD and distributors make it available, streaming jumbo-sized 4K files might not work without the fastest connections. To be very profitable, the electronics trade dreams of mass TV set replacement on a cycle of just a few years, and its current mandate is to set new standards of picture quality that render our 1080 sets obsolete. 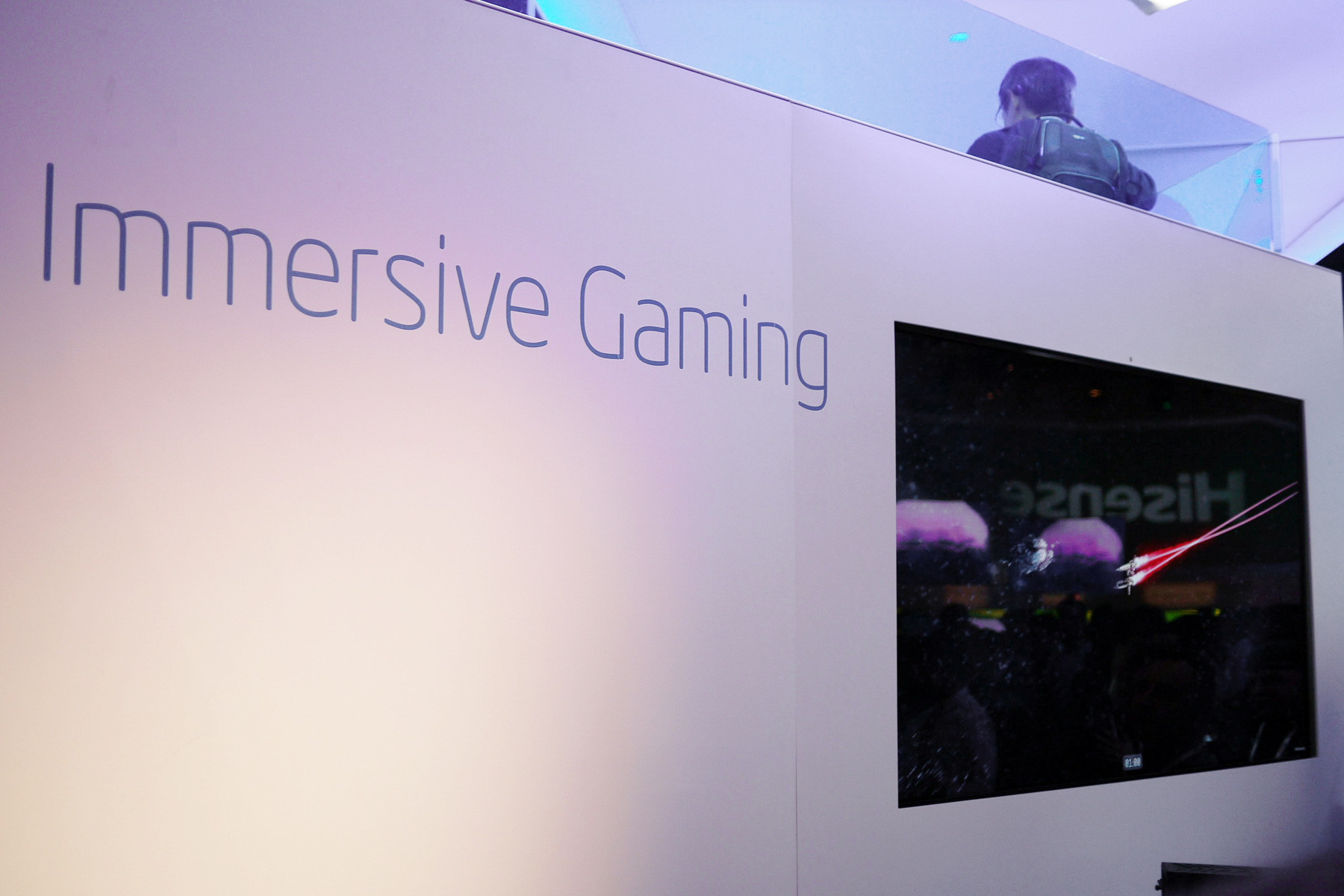 Establishing a more immersive video standard is more likely to be the wish of the tech industry than its customers. While their interests are only partially overlapping, the electronics and media trades alike are eager to command the full, perpetual attention of consumers, and to keep them spending more and more on leisure, even at a time of economic stagnation for all segments of the population except the rich. Many companies want to win viewers back to the living room TV set or the game console from the ubiquitous mobile screens and computer displays used for watching web video, playing games, and texting and tweeting; many others want to keep us hooked on monthly subscription services with high and rising fees. Content companies of all kinds want a large audience dedicated to them, unable to live without their offerings. When we hear of immersive experiences we might think of losing ourselves in the pleasures of watching, or playing, or reading–or scrolling through, or interacting with–media. Maybe technology and design are crucial to such states of immersion. But it will be, first of all, to the mutual benefit of the media and electronics firms if we concede the terms of our pleasure to their ideals of technological sophistication and expectations of audience activity, and subsume our fantasies in theirs.