An Eye for an Eye: Remakes and Repression
Janani Subramanian/University of Southern California 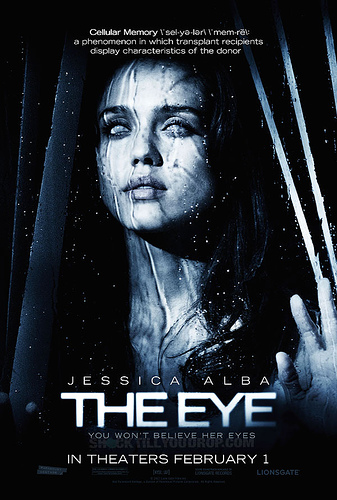 The American remake of The Eye

Two weeks ago, in my Transnational Horror class, we began our “Pan-Asian” section of the course, featuring East Asian films that have been or will be remade by Hollywood. We started with 2001’s The Eye, made by Hong Kong-based brothers Danny & Oxide Pang, which was remade in 2008 by French directors David Moreau and Xavier Palud. I watched the remake before I watched the original, which in and of itself is an interesting occurrence (and one that many of my students experienced with Ringu/The Ring), and I was actually quite surprised by how different the original film was from the remake. The predominant difference was stylistic in nature; the original moves at a different pace than the remake, a fact that points to the influence of the “Asia Extreme” phenomenon in global horror. As Chi-Yun Shin argues, Tartan Video’s “Asia Extreme” distribution title has worked to create an often problematic generic category for Asian horror; the difference between the languid pace of 2001’s The Eye and the more frenetic one of 2008’s version suggests that “Asia Extreme” is a Western-influenced style of horror that has perhaps been foisted upon films that are less visceral than their remakes.1

As Valerie Wee points out in her insightful article about the haunted videos in the Japanese Ringu and American-made The Ring, the stylistic and narrative differences between the two films can be rooted in the different cultural contexts of their production. Wee’s analysis of the two haunted videos of Ringu and The Ring is exceptional because of its close textual analysis of the videos themselves. The video is the main source of the film’s “haunting,” and, as Wee skillfully brings out, the differences between the Japanese and American videos are illustrative of larger cultural, narrative and stylistic contrasts between the two texts as a whole. Wee’s project with the two films not only gave my students a model for productive comparison and contrast across national boundaries, but also encouraged me to think deeper about the differences between 2001’s Eye and 2008’s remake by focusing on one specific narrative element: the revelation of the cornea donor and her traumatic death.2 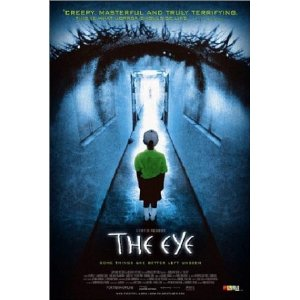 In “The Pan-Asian Outlook of The Eye,” Adam Knee argues that the original Eye’s characterization of two locations – Hong Kong and Thailand – reveal specific regional assumptions about East Asia.3 Mun (Angelica Lee), our heroine, after seeing ghosts through her donated corneas, goes to Thailand to investigate what happened to Ling (Chutcha Rujinanon), her donor, and discovers that Ling suffered from the prejudices of a seemingly rural and close-minded Thai village community. Knee points out that the reference to Thailand not only suggests a link between the present/modern (Hong Kong) and the past (Thailand), but also suggests an alternative connection between the Chinese Mun and the Thai Ling; having Ling “haunt” Mun is evocative of the often-elided labor relationships between East and Southeast Asia, where modern spaces like Hong Kong benefit from “the bodily labors of its Southeast Asian workers – primarily female.”4 Knee goes further to say that this relationship of “structural inequality” can be extended to the production of the film itself, a “transnational” product that borrows heavily from Thai locations and resources.5

Knee’s argument about the link between the two women and the motif of “haunting” is equally effective in the contexts of the 2008 remake – Los Angeles and Mexico – and the relocation of the action leaves the adaptation as troubled and troubling as the original. Our heroine, Sydney Wells (Jessica Alba), also discovers that her new corneas are generating some unexpected and terrifying visions; as she investigates, she finds that her donor, Ana Martinez (Fernanda Romero), a psychic living in Los Llanos, Mexico, was persecuted as a witch for her ability to envision the future.

The movie’s plot proceeds similarly to the original, with Sydney and her psychologist driving to Mexico to solve the mystery, meet Ana’s family, and lay her ghost to rest. Sydney finally discovers through visions that Ana predicted a fire in the ceramics factory that most of the town was employed in; she tried to warn the workers, but to no avail, and is subsequently blamed for the fire itself, tormented by townspeople with shouts of “Bruja!” (witch) until she commits suicide. Once Sydney assures Ana’s ghost that the accident was not her fault, her soul is supposedly able to leave this world in peace and leave Sydney’s new eyes alone. 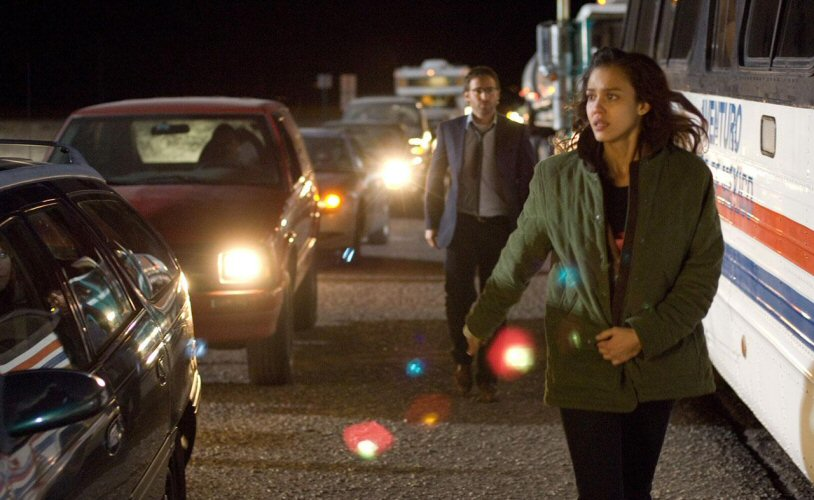 The same associations that Knee makes between the Hong Kong and Thai scenes of (2001) The Eye seem to hold true of the remake’s locations – Mexico, like Thailand, provides the United States with much of the invisible labor that ensures its global dominance. The haunting presence of the monstrous-feminine and the collapse of the past and the present, while perhaps more prevalent in Asian horror, fits into (2008) The Eye’s regionalization of Mexico’s alleged rural, folk and Catholic mysticism and the United States’ secular modernity. But, as Knee also says of the original film, “the subsequent merging of the two women points to still more profound structural oppositions that cannot be readily resolved.”6 Similarly, the alignment of Sydney and Ana suggests more connections than the film’s narrative can handle, specifically the problematic link of a rural Mexican female laborer and an upper middle-class violinist living in Los Angeles, the idea of haunting as a metaphor for border crossing, or even the unexplored allusion to organ trafficking between the United States and Mexico. 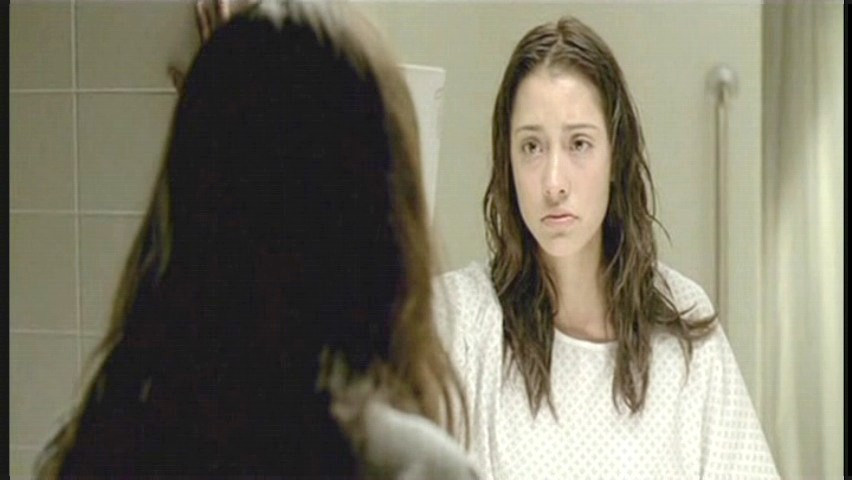 Sydney looks in the mirror and sees Ana

The choice of Jessica Alba to play Sydney complicates matters even further, as there is no mention made of Alba’s ethnicity within the film, although her sister (Parker Posey) is white. Alba’s ethnic ambiguity perhaps capitalizes on the popularity of mixed-race actors in Hollywood, but in this case it proves convenient in linking Sydney Wells with Ana Martinez.7 Both films feature a “mirror scene” where the female protagonist misrecognizes her ghostly counterpart as her own reflection; as the camera switches back and forth between Sydney and Ana-in-the-mirror, it is impossible to imagine recreating the same scene with a white(r) actress. I would argue that the connection between Sydney and Ana represents a variation on the labor divide that Knee highlights between the Hong Kong film industry and Thai labor, suggesting the equally problematic elision of racial and ethnic identities that occurs on and behind mainstream Hollywood screens.

Horror scholars often argue that horror films depend on a return of the repressed, and Knee reads the 2001 film’s twist ending as an example of this return – the film’s unmanaged contradictions literally blow up in the faces of its characters. In a slightly different vein, 2008’s twist – also a massive explosion that blinds our protagonist once more – takes place on the U.S.-Mexico border, as Sydney and her psychologist drive back to Los Angeles. If the original film’s explosion signifies a warning of sorts about “the labor and sacrifices of various socially marginalized or disempowered people,” 2008’s version functions more as a way of putting a violent yet final cap on the discussion of border crossing.8 Whether going from blindness to sight, science to mysticism, or the United States to Mexico, the film’s re-blinding of its heroine and return to Los Angeles suggests that crossing literal and figurative borders is unwise – the ghosts of exploited labor relations and Hollywood’s whiteness are perhaps still too terrifying to confront.

Image Credits:
1. The American remake of The Eye
2. 2001 The Eye Poster
3. Sydney at the Mexican-American border
4. Sydney looks in the mirror and sees Ana