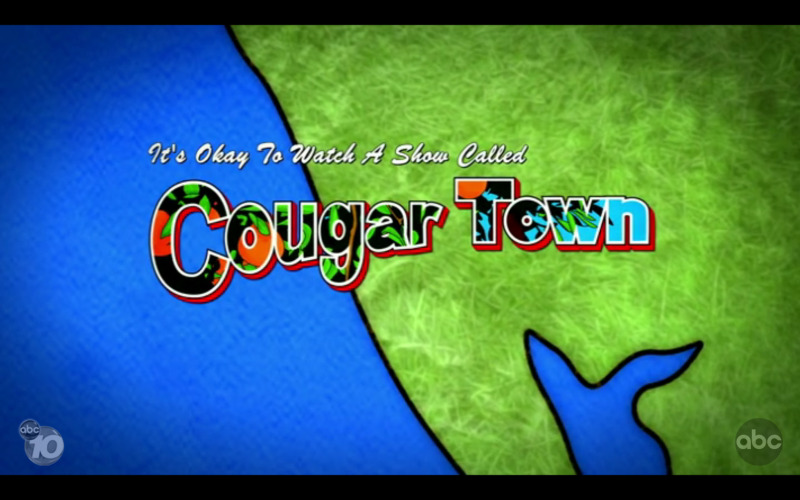 Throughout the second season of Cougar Town, the sitcom’s opening credits have winkingly acknowledged its vexed title with weekly modifications to its opening credits, remarking: “Titles Are Hard” or “Not What The Show Is” or, my personal favorite, “It’s Okay To Watch A Show Called…” For some reason, the very premise of a show about middle-aged women who date younger men has caused mass suspicion. I’m even a bit hesitant to admit I watch the show or to recommend it, because whenever I do, people seem to respond with judgment and disbelief. And, you know what? Many of my friends are 40-ish women, a number single and dealing with the frustrations of dating, some involved with younger men. So why all the haters? Why should there be such distain for a show about dating and friendship among women in their 40s? (I, for one, still love Sex and the City, though the similarities between the two shows are superficial.) The show was initially marketed as a tacky sex comedy set on Florida’s gulf coast, though it was always more about self-deprecation and repartée among a circle of friends. Even if the show was about cougars, what’s wrong with that? 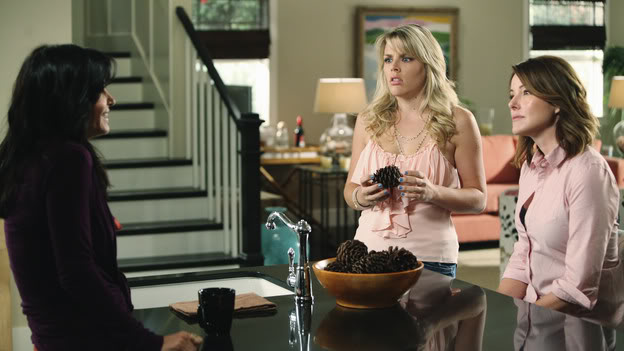 A Circle of Friends

I had heard that the show “got better” when it transitioned away from being about cougars, so I watched the first season finale on Hulu upon a friend’s nudging. The recent seasons of Project Runway and Mad Men had ended, leaving holes in my life, and I figured I had nothing to loose. I was pleasantly and immediately surprised and promoted the new episodes to DVR status. After becoming hooked on the second season, I decided to Netflix the first season to see how bad it was at the beginning. To my surprise, I was enamored by the pilot before the first fade-out for commercial break: the series opens with recent divorcée Jules (Courtney Cox) flashing herself in a mirror, examining places where her skin stays slack after she pinches it, and the spots of flab that jiggle. Cut to Jules and her younger friend and employee Laurie (a game Busy Philipps) playing a game of “son or boyfriend?” while looking around at intergenerational couples. The show is immediately on the side of the older woman, and it’s one of those rare sitcoms that’s actually smarter and better-written than one would expect. The series begins with performances and pacing that are a bit punchier, then it transitions to a slightly more snappy quality. Still, some of the best material was there at the start. 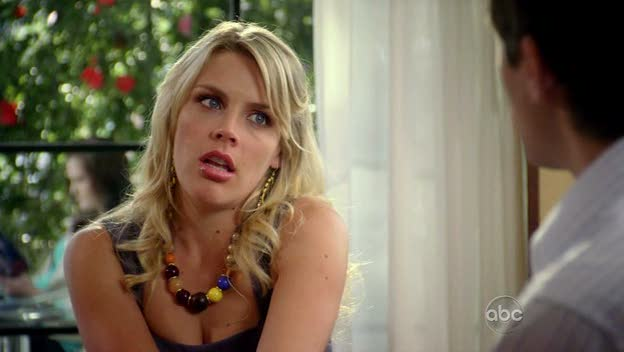 From the start, Cougar Town has been in the shadow of its hugely popular ABC lead-in, Modern Family. Whereas Modern Family purports to represent a range of domestic structures, Cougar Town strikes me as far more porous in its definitions of family. There are various traditional types of relationships–spouses, exes, parents, sons, boyfriends, girlfriends, friends, bosses, employees, and neighbors—but here kinship has less to do with nuclear families than with communities. Affection and intimacy are expressed through jokey insults based upon deeply knowing each other’s flaws. In the pilot, after coaxing from Lori, the usually wound-up Jules goes out for a drink at a hip young club. Laurie suggests, “Say something judgmental about me. That always loosens you up.” Jules responds, “You can’t wear fake nails on just one hand. You look like a crazy whore.” Laurie explains her logic, “I only had four left, and this is my smoking hand,” as she makes a smoking gesture while modeling her manicure. Philipps’ delivery is priceless.

To my great pleasure, the show’s new parents primarily avoid their baby rather than privilege it or structure their lives around it. In the fourth episode, Ellie (Christa Miller), Jules’ bitchy and botoxed best friend and neighbor confesses, “I hate my baby. … We have completely different tastes in food, music, and books. And I just know when he gets older he’s going to do something to drive me crazy like marry a poor person.” Later in the season (in “Wake Up Time”), two women compare their daddy issues over morning coffee: Sara (guest star Sheryl Crow) explains, “My dad left when I was a kid. I’m kind of messed up sexually.” Ellie flippantly responds, “I had crappy father, too, but I didn’t go slutty. I just died inside.” Such throwaway lines not only offer character development but suggest a critique of nuclear families. Beyond the dialogue, the show regularly undermines the primacy of couples through visual jokes as well: intimate moments are often presented in two-shot or in shot/reverse-shot before a cut to a belated wide shot reveals that other characters are in the space and rupturing the private romantic or confessional conversations. Somehow, this gag never gets old to me. 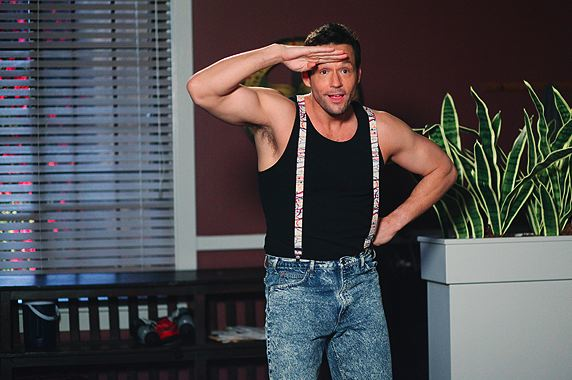 As in series co-creator Bill Lawrence’s Scrubs, the show also plays with the quirks of straight masculinity and homosocial love between guy friends, particularly Ellie’s whipped but well-endowed husband Andy (Ian Gomez) and his mancrush on Jules’ cracker ex-husband Bobby (a bit too broadly played by Brian Van Holt). In “Letting You Go,” Jules’ romantic foil Grayson (Josh Hopkins) reveals that he has late-night jam sessions dancing to Enya’s “Orinoco Flow” in his old acid-wash jeans; in “Little Girl Blues” (second season), three 40-something male friends rally to soothe Jules’ 19-year-old son Travis’s (Dan Byrd) sexual performance anxieties by explaining the various ways that they, themselves, worry about being bad in bed.

The show’s transitional episode, “Turn This Car Around,” comes late in the first season and is themed around the challenges of mid-life change and the need to come to terms with the life one has. Grayson realizes he’s bored with bedding girls half his age, and Bobby adopts a dog to pre-empt his loneliness when his son goes off to college. The cul-de-sac crew assembles to watch American Idol with wine, and Jules, filling the glasses so full of wine that she has to slurp the top off, comments, “You know, they say you can get four glasses of wine out of one bottle, but I only get like one and a half.” In the episode’s central arc, Jules decides to stop drinking for a month, which nearly ruins all of her relationships, and her loved ones gather to stage an intervention to get her to start drinking again. Ellie states, “Nothing could ever make me stop loving you, except you not drinking. Twelve steps, schmelve steps. Alcohol makes people fun.” When Jules falls off the wagon, she remarks, “You what sucks about getting older? You still have all the same dreams that things are going to be different, you know, in a year, ten years, twenty, whatever. But deep down inside, you know those dreams aren’t gonna come true. I just get out of bed every day and I just say, ‘This is it. I am who I am.’” Not quite reaching for profundity, the show nonetheless hits middle-aged settling on the head with candor and a sense of humor. 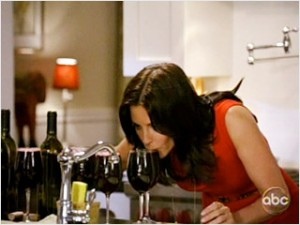 Rather than what Whitney Houston once proclaimed “the greatest love of all” (self-acceptance), perhaps all the characters’ first love is red wine. They drink and talk about drinking all the time, and they take great pleasure in their middle-aged bourgie indulgence. At one point they even explore “morning drinking” after tasting the dregs of the prior night’s winefest. They embrace their lives as lushes, bantering as they binge drink. In the first season finale, Jules discovers an online report that moderate drinking can not only be healthy but can also help maintain lower weights for women. Jules announces, “Drinking keeps women skinny!” Laurie exclaims, “Ohmygod!” Ellie assesses, “This is bigger than curing cancer.” If I’m totally honest, one of the most pleasurable habits I’ve picked as a singleton in my 30s is drinking cheap shiraz while watching TV—an indulgence that developed during the second season of Grey’s Anatomy. Now one of my drinking companions is Cougar Town.