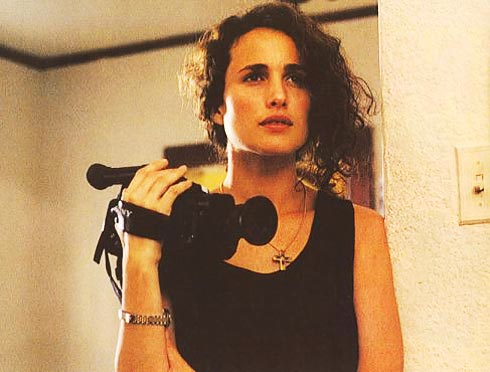 Ann (Andie MacDowell) with a video camera in sex, lies, and videotape

In summer 1989, sex, lies, and videotape won the Palme d’Or at Cannes and was released theatrically to acclaim and profitability. I was 13 at the time, and I couldn’t wait to see it. I would have to wait, for its video release when I was 14. But I was fascinated. The hype around sex, lies, and videotape suggested to me, for the first time probably, that there was something to cinema other than Hollywood. But it wasn’t just me: the alluring title, the quality performances, and most of all, its commercial success helped open up the new market for independent films for the next decade. Despite its impact at the time and the lingering influence it has had in reshaping the cinema scene, this twentieth anniversary has gone—as far as I can tell—unremarked.

Of course, there were independent films before sex, lies, and videotape, and there would be abundant mediocrity afterwards; nonetheless, the publicity and commercial success of this single film helped fuel a boom of festivals, art-house multiplexes, cable stations, and video releases that fostered the release and exploitation of independent cinema. sex set the scene for cinematic possibilities. sex also set a template of sorts for Miramax’s early 1990s cinema of quality transgressions: The Grifters, The Cook, the Thief, His Wife and Her Lover, Delicatessen, The Crying Game, Reservoir Dogs, The Piano, Pulp Fiction, Heavenly Creatures and others. It was a brief but stunning run until Miramax turned toward the studio model and joined forces with Disney, and before “independent” cinema became a euphemism for formulaic character studies that had little to do with any kind of alternative culture or actual financial anarchism. sex, by presenting an alternative heterosexuality in which every sexual act and relationship is non-normative may also have also helped the door for the heralded New Queer Cinema (Poison, Paris Is Burning, Swoon, etc) that immediately followed on the festival circuit in 1990-91. 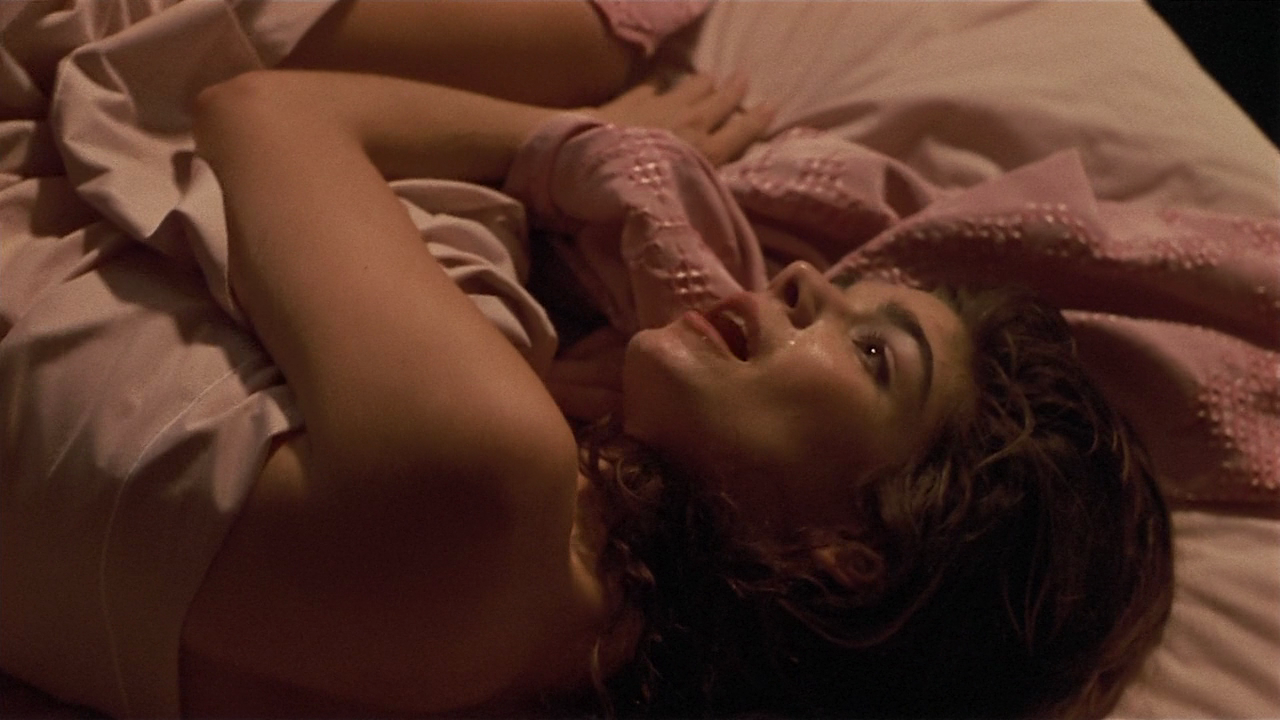 Given the film’s groundbreaking production and distribution history, it’s striking that the film’s narrative and character psychology likewise focus on independence: from sibling obligations, from traditional marriage, from personal baggage. In the film, the protagonist—or antihero, depending on your point of view—Graham (James Spader) doesn’t want to deal with the commitments of a relationship, a house, a job, or, as he puts it, keys. When he comes to visit an old college buddy John (Peter Gallagher) and his wife Ann (Andie MacDowell), he also liberates Ann from her marriage and, one might assume, her need for therapy. Maybe I was too young to question such things, but Graham’s “issues” (he gets off by masturbating videotaped interviews that he has conducted with women about their sexual histories) never seemed so strange. When he said that he felt “comparatively healthy,” I kind of agreed. I had more of a moralizing view of adultery, which, in the case of sex, lies in an ongoing liaison between John and Ann’s flippant younger sister Cynthia (Laura San Giacomo). If I have evolved in my response to the film, it’s in my deepening appreciation of San Giacomo and sympathy with Cynthia—though even as a young prude, I always savored her post-orgasmic dismissal, “You can go now.”1 At a key moment midway through the film, the film cuts out and withholds the intimate encounter between Graham and Ann. The film eventually does deliver the goods, when dramatically more essential (a trick of expository withholding and narrative jigsaw puzzling that Soderbergh mastered in his most pleasurable film, Out of Sight), a move that foreshadowing recurring trends in nonlinear narratives ever since. Until then, the audience has to wait for video. Throughout the film, we see the dichotomies of film and video, professional and amateur, promiscuous and celibate, sex acts and sex talk. 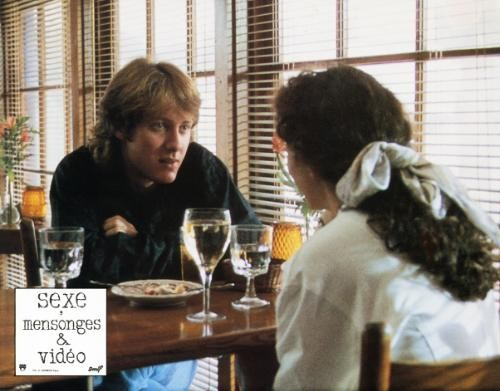 Although the film is about sex, there’s little sex actually in the film. It was marketed as a provocative, erotic comedy but is not, for the most part, particularly sexy. The film, despite the titillating title and common connotative associations between home video and pornography, takes sex seriously as something of incredible complexity: it can be pleasurable or unpleasurable, it can happen with or without intimacy, it can have little or nothing to do with intercourse, and it can mean different things to and with different people. I don’t think it had occurred to my pubescent mind before this film that sex was something that had meaning beyond the simplistic binary of good/sinful. I was lucky enough that my dad gave me the birds-and-bees talk as a child, but I was also taught that sex should only exist within marriage. Certainly, I knew people in movies had affairs, but they were usually either passionate or punished. sex offered a wholly different view of sex, relationships, love, and marriage, than what I had ever seen before—although maybe the fact that the film’s skepticism about coupledom resonated so deeply with my own attitudes suggests that maybe I needed therapy as badly as Ann. I took the film very seriously, as something to study and watch repeatedly; it was only belatedly that I recognized the humor in the film, or much more recently, discovered peers who likewise owned and rewatched the film to the point of memorization. Again, this kind of intense relationship to a text could only exist because of video. 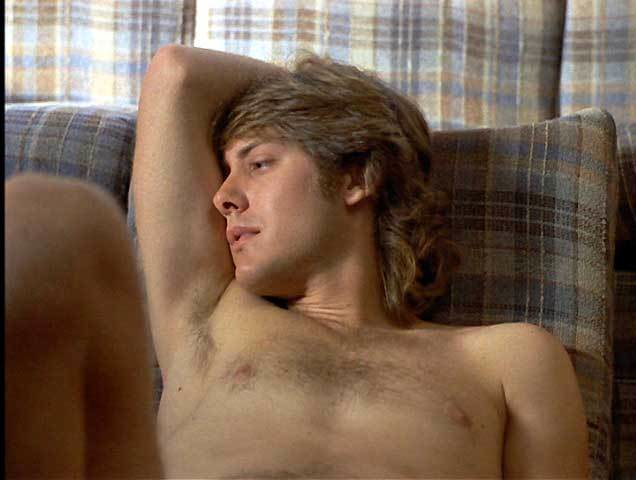 Home video made sex more visible—both by giving filmmakers such as Soderbergh the necessary seed money for independent productions through pre-sold rights and by bringing innovative and/or pornographic works into the privacy of the home entertainment center. And despite the film’s importance as an independent film, it was surely seen far more widely on videotape. The film’s alternative economics and mores were interrelated, bound together by videotape. In the published production diaries (themselves deeply enlightening to me at the time as revealing that films are made with intentional meanings and serendipitous revisions), Soderbergh makes tangential references to The Last Picture Show.2 If that film offered a semi-nostalgic look at awkward adolescent sexual negotiations concurrent with the demise of cinema in the age of television, sex offered a more adult view of sex after some of the mystery had worn off, concurrent with the impact of home video and the ascendance of independent film. 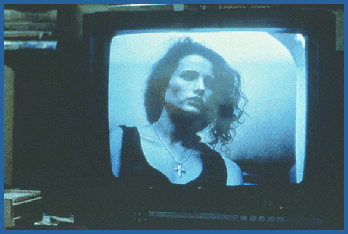 The ugly truth: Ann on tape

In retrospect, it was only too fitting that the movie was all about film’s other: videotape. In the film, home video becomes the site of intimacy—a grainy image full of gray areas, of bruisy black and blues—in stark visual distinction to the slick surface of things shot on film. sex, lies has always seemed to me remarkably truthful in its representation of our conflicted feelings and values about sex. The film is talky yet incisive and compelling, perverted yet intelligent. For me, it was a formative text, one that made me understand both the cinema and sex differently.

1. Ann (Andie MacDowell) with a video camera in sex, lies, and videotape
2. Cynthia (Laura San Giacomo) exhibits her comfort with sex and with herself
3. Talking about sex: Graham (James Spader) and Ann (Andie MacDowell)
4. Graham looks away from a tape when the emotional intimacy gets to be too much
5. The ugly truth: Ann on tape