Inland Empire: The Cinema in Trouble?

You can break through to something else, but if you’re not up for destroying you can’t get there. (Lynch in Figgis 2007: 19) 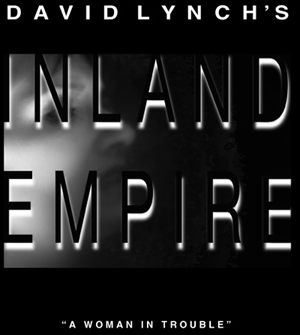 David Lynch has gone digital. His new feature film Inland Empire (2006) is 179 minutes long, filmed without a script; shot with a prosumer DV camera and self-distributed by Lynch (in the US). Inland Empire is currently doing film festivals across Australia. I saw it at the 2007 Sydney International Film Festival, in a sold-out session.

Lynch is consistently: surreal, indulgent, bold, exhilarating and entertaining. Inland Empire is no exception. Also, the film represents a digital ‘catharsis’ for the auteur:

Film is beautiful, but having had this experience I would die if I had to go that slow ever again. It’s not slow in a good way. It’s death, death, death. I can hardly stand thinking about it (Figgis 2007: 19).

What is the impact of ‘the digital’ here? Is Inland Empire a departure from the Lynch oeuvre? Death and the Digital are never far apart: death of a form? (the feature); death of a medium? (celluloid) or death of an activity? (cinema-going). These are common questions today. (For some good answers – see Wheeler Winston Dixon’s excellent Twenty-Five Reasons Why It’s All Over). What I want to say here, is that all this (anticipated) death and destruction can be a good thing. And Inland Empire reveals why. 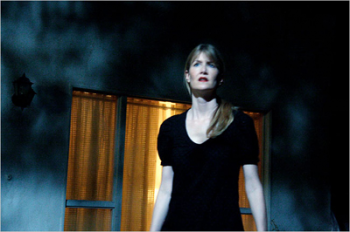 Irony is at play in the simplicity of the tagline for Inland Empire : ‘A Woman in Trouble’. Laura Dern (Nikki Grace) is actually multiple alter –egos. Here, Lynch returns to his favourite theme of (fractured) identity. There are 7 narrative worlds (Clarke 2007):

1. LA actor Nikki Grace (Laura Dern) is married to Piotrek Król (Peter J. Lucas). She is paid an impromptu visit by a (very odd) neighbour (Grace Zabriskie)
2. Nikki wins the role of ‘Susan Blue’ in a film production On High in Blue Tomorrows – a romantic historical melodrama. The Director of the film is Kingsley Stewart (Jeremy Irons). The question of romance with her co-star Devon Burk (Justin Theroux) develops
3. On High in Blue Tomorrows is based on an unfinished ‘cursed’ production 4/7
4. Both productions are adaptations of an old Polish folk story
5. A stranger called ‘Smithy’ visits the set of On High in Blue Tomorrows. His house doubles as a set-piece for the film
6. A gang of (all singing and dancing) Polish prostitutes in Lodz
7. A 1950s sitcom-style family of (giant, vertical) Rabbit: ‘Mum’ is voiced by Naomi Watts

Inland Empire flirts with, but defies, contemporary narrative modes. On the surface it mirrors the complexity of the ‘multi-thread’ (TV) or ‘multi-strand’ (film) model. Steven Johnson, in his book, Everything Bad is Good for You has drawn lots of narrative ‘maps’ and ‘networks’ to represent the complexity of ‘multithreaded’ TV structure (including 24 and The Sopranos) (Johnson 2005). I love these narrative diagrams – and have drawn some Cinematic Diagrams for films. But what about a diagram for Inland Empire ? Forget it. It’s a futile exercise – since Lynch destroys narrative models and expectations with abstraction. (Note: No studio, no script and a prosumer DV camera are a world away from the script architecture of network television).

A great poet might articulate abstractions with words but cinema does it with pictures flowing together in sequences. It’s magical, it goes into the abstract. (Figgis 2007: 18) 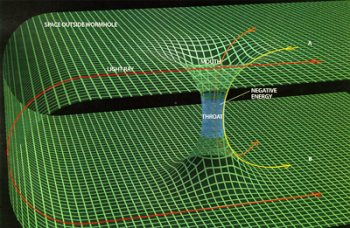 In lieu of any workable narrative diagrams for Inland Empire – one key image I sugggest is that of the Wormhole. In Manohla Dargis’ review of Inland Empire (NY Times) she proposes that the best way to penetrate the film is spatially. I think she is exactly right:

The spaces in “Inland Empire” function as way stations, holding pens, states of minds (Nikki’s, Susan’s, Mr. Lynch’s), site of revelation and negotiation, of violence and intimacy. They are cinematic spaces in which images flower and fester, and stories are born.(Dargis 2006)

Inland Empire functions less as a network of narratives – and more as a network of spaces (connected by those wormholes). In this sense, the film can framed as a revival of spatial montage – that ‘suppressed’ mode of cinema from the early 20th century film avant-garde (Manovich 2001). A clue to this is given, right at the beginning of the film, when two Polish prostitutes (in Lodz?) watch The Rabbits flicker away on their TV screen. No explanation unites these spaces and their precise geography is unclear. (Lynch built the Rabbit set in his backyard with a DV camera rig – and yes there were complaints from the neighbours). The best we can do is by the synopsis for the Rabbits at DavidLynch.com:

In a nameless city, deluged by a continuous rain, three rabbits live with a fearful mystery (DavidLynch.com)

Inland Empire is tableaux in form – revealing Lynch at his most episodic. The Rabbits are just one of multiple tableaux ‘inserted’ into the feature form. This approach to form/structure reworks the MTV style of the 1990s. Specifically, his Rabbits recall the stylised-sitcom of Oliver Stone’s Natural Born Killers (1994). In this light, the form of Inland Empire is an assemblage of ‘clips’. Two of the most memorable are: 1) a gang of Polish prostitutes who dance and lip-synch The Loco-Motion and 2) an LA street scene set to Beck’s Black Tambourine.

Inland Empire as a feature form is stretched (or deformed) to 179 minutes. Here, the feature is exploited as a vessel for various past/present Lynchian worlds absorbed from television, the web and fine art: Twin Peaks; Mulholland Drive; Rabbits; Dumbland and Axxon N. (which exist is various stages of (in)complettion).

On an aesthetic level – should we mourn the loss of the rich cinematography which had Lynch perfected by Mulholland Drive? Perhaps. Partly. But as Lynch says: one needs to be ‘up for destroying’. In Inland Empire we get distorted character portraits (with a cheap fish-eye DV lens); blown-out (overexposed) images and spaces ‘painted’ in high contrast colour and shadow.

David Lynch started as a painter and it is no surprise that his new digital aesthetic (of the moving image) overlaps with his recent experiments in the visual arts. Foundation Cartier hosted a recent exhibition of his eclectic work The Air on Fire. This included a set of digitally (Photoshop) manipulated Victorian erotic photos titled Distorted Nudes. The destruction and (re)assemblage of (body) parts in the nudes bear some proximity to the distorted digital cinematography of Inland Empire. Holly Willis says that “the most compelling DV feature-film experiments work…using DV to push against the confines of an entrenched realism” – and Lynch is definitely at home here (Willis 2005: 22). 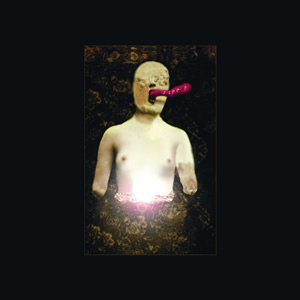 Inland Empire represents a (productive) destruction of the feature film: on narrative, form and aesthetics. As the ‘digital insurgency’ grows stronger in the cinema (as more visionaries ‘go digital’ such as Figgis, Kiarostami, Von Trier and now Lynch) – it seems that the cinema is, indeed, in Trouble. The death of celluloid is close. But the death of the cinema? No way. Digital cinema is proving a catalyst for the re(evaluation) of our one hundred-plus years history of the projected moving image. Inland Empire is a film (aesthetically, if not politically) which recalls another time of ‘trouble’ in the cinema. That of the French New Wave. In 1967 Jean-Luc Godard described Week End as “a film adrift in the cosmos” and “a film found on a scrap heap”. Some forty years later this provides apt description for the weird and wonderful Inland Empire .