by: Mark Andrejevic / University of Iowa

Despite their threats and invective, it’s hard to take the folks at Fox seriously when they badmouth VoteForTheWorst.com, the Website that champions the underdogs on American Idol – not out of pity, but in order to have them to kick around a bit longer. Fox has reportedly slapped the site with cease-and-desist orders and dispatched its spokespeople to call it “hateful” and “mean-spirited,” but as is so often the case with Murdoch-style outrage, this reeks of a certain gleeful hypocrisy – as when the network turned suddenly penitent after Who Wants to Marry a Multi-Millionaire?, and trumpeted its remorse all the way to the bank (www.votefortheworst.com). VoteForTheWorst.com is merely one more self-stoking symptom of American Idol’s daunting success. As the site’s founder put it, Fox needs to lighten up: “All we’re doing is getting people to watch their show…We’re [earning] you money for the sponsors!” (Elfman, 2007).

If it’s not already quietly negotiating a deal to buy the site, Fox should learn from Bravo, which recently purchased the well established, rip-on-your-favorite-show site, TelevisionWithoutPity.com (TWoP for short) (Peterson, 2007). For those who have been following its snarky antics since it changed its name from Mighty Big TV and attracted a loyal following of some 50,000 registered users with lots more visitors and lurkers, the sale might be somewhat bittersweet: the site that gleefully ripped on The Powers That Be (TPTB, in TWoPspeak) has officially been deputized by them (Kapica, 2006). All of which might threaten to take some of the satisfaction out of the snark…or not.

A few years ago, I posted an advertisement on the site (which was strapped for cash at the time, before its deal with Yahoo and its purchase by Bravo) inviting visitors to participate in an online survey. In keeping with the general tenor of the site, I received lots (almost 1,800, within a matter of days) of articulate, thoughtful, and highly self-reflexive answers to questions about how TWoPpers envisioned their role in the media food chain. Despite the interactive hype that has inundated the media environment since the start of the millennium, the people who wrote me were, in keeping with the upbeat cynicism that characterizes all but the most unabashedly fannish forums on the site, quite cautious about making any broad claims regarding audience empowerment or subversive consumption. As one respondent put it, “the producers are such prostitutes to advertisers and whatever other show may be popular that giving advice would be pointless. It is all about the Benjamins.”

This response was typical. Most of those who wrote me took pains to suggest that they didn’t have any illusions about transforming or improving the culture industry. The recurring theme in the responses was that contributors post primarily for one another, and that if producers feel like paying attention, so much the better. Some respondents cautioned against the dangers of TWoPpers believing their own press coverage, which included accounts of show runners scurrying back to their computers to see how the boards were treating their shows. As one respondent put it, “Although the artistic personnel of some shows probably read TWOP, I think the posters on the forums think they have more influence than they probably do. If they write posts for the series creators, they are deluded as to their influence.” 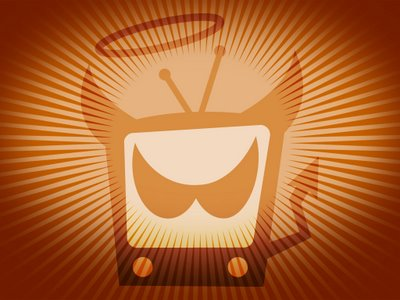 Which is not to say TWoPpers were entirely without hope: the site’s snark is motivated in no small part by disappointment in the persistent inanity and unfulfilled potential of a medium for which contributors and founders alike maintain a perverse affection. As one of the site’s co-founders, Sarah Bunting put it, “We love television, and we want it to be better than it is. Because most of the time — 85 percent of the time — it’s crap” (Vogel, 2006). But improving TV via fan participation is not something they’re counting on: “If TV is watching us, that’s great,” Bunting said, “but it’s not what we set out to do” (Kapica, 2006).

TWoPpers are using a new medium – the Internet – to make an older one more entertaining for themselves and anyone else who wants to tag along or chip in. As one of the respondents to my survey put it, “I would like my TV to be smarter, better written, more intellectually stimulating, and more emotionally engaging. With TWoP, at least my watching of TV can be those things.”

This is the beauty of interactivity from the producers’ perspective: not only does it allow for the spontaneous formation of instant focus groups, but it also allows them to benefit from the free labor of smart people trying to make bad TV more entertaining.

I first noticed this phenomenon when I was spending a fair amount of time in the official chat rooms for the first US version of Big Brother. Despite much hype, the show was often mind-numbingly boring, as were the round-the-clock live Internet video feeds. The chat rooms became, for at least some viewers, the only way to make the show interesting. While watching the cast members’ attempts to entertain themselves in a drab, media-free ranch house on a lot in studio city, online viewers similarly took upon themselves the task of amusing themselves by speculating on plot twists that might make the show more interesting, by sharing information about the various contestants, and by starting online debates.

TWoP has elevated the attempt to make bad TV more entertaining to a popular art form. In the TWoP world, the show is no longer the final product, but rather the raw material to which value is added by the labor – some paid, some free – of recappers and forum contributors. While TWoPpers benefit from the wit and wisdom of their fellow posters and their shared project, so do producers. Not only did roughly one-third of the respondents to my survey indicate that they watched more TV because of TWoP but a similar number indicated that there were shows that they would not have watched without the TWoP recaps.

All of which suggests that it might be worth revisiting the Jenkinsian appropriation of de Certeau’s observation that, “ readers are travelers; they move across lands belonging to someone else, like nomads poaching their way across fields they did not write, despoiling the wealth of Egypt to enjoy it themselves” (as quoted in Jenkins, 1988; 86). The romantic appeal of this formulation is unmistakable: it refigures fans of all stripes as latter day Robin Hoods, bandits, and rebels – pirating the wealth of the Hollywood heavies. In the interactive era, the metaphor breaks down in the transition from fields to texts. As economists might put it, the consumption of crops is rival: if I make off in the night with the wheat you worked all season tending, you’ve been despoiled, stripped of your goods. If however, I devote my lunch hour and down time at work honing my wit on the grindstone of American Idol, my enjoyment only enhances the wealth of Century City.

It turns out that the despoilers aren’t tearing their way across the media landscape like rapacious rebels, but perhaps more like unpaid nomadic laborers, turning the soil and enriching it as they go. Fox needs to wake up and smell the fertilizer that’s being lavished on its fields for free.