This is part two of a two-part column, click here to read part one.

Even if queer politics are not at the forefront of the series (Desperate Housewives), a gay male aesthetic indeed is discernible in the show: Edie Britt, for example, resembles a drag queen with her excessive femininity and femme fatale demeanor, and many of the male characters are drawn along the lines of certain macho stereotypes that one might find in gay porn. But the dialogue of the series is also extremely camp, often to the point of parody. In many exchanges, the women trade lines like drag queens at a beauty contest: for example, Gabrielle asks her husband in the middle of one of their fights: “Why are all rich men such jerks?” Right on cue, he answers: “The same reason all beautiful women are bitches.” Or when Susan asks Edie if she believes in evil, Edie quips back: “of course I believe in evil, I work in real estate.” And when Gabrielle runs out of credit on her teenage boyfriend's credit card and he tells her she better take back the shoes she just bought, she warns him: “Return the shoes? I can't talk to you when you're hysterical.” The camp tone, obviously, enhances the appeal of the show, it leavens the dark themes of murder and infidelity and it livens up the interactions between the women. But, again, it also distracts attention away from any real radical feminist potential and it deflects all possibilities of genuine intimacy between the women. 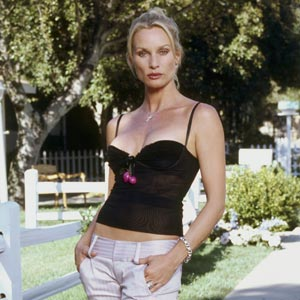 Interestingly, then, especially given its interest in all kinds of so-called sexual perversity from male homosexuality to sado-masochism, there is one topic that the show, despite its supposedly gay agenda, never approaches – namely, lesbianism. Perhaps because the intimate relationships between the housewives are so central to the show's success, and therefore must never even hint at desire between the women, but also because the overt feminism must not ever tip into a devastating critique of heterosexuality itself, the L word is simply never mentioned.

But if the desperate housewives did decide that heterosexuality, like motherhood, domesticity and marriage, was not all it was cracked up to be, then perhaps they would be guest stars on Showtime's breakout hit, the internationally acclaimed The L Word, created by Eileen Chaikin. Like Desperate Housewives, The L Word has had tremendous international success, especially in Western Europe, and like Desperate Housewives, The L Word has spawned numerous viewing parties: enthusiastic lesbian viewers in particular gather to watch every new episode in bars and pubs and at house parties. The L Word has even inspired parody skits including a full-length film titled The D Word (referring in English to “dyke”). In fact, as the parody film implies, The L Word may well have more in common with Desperate Housewives than it does with other queer texts given its commitment to the soap opera format and the appeal that it makes to the broadest possible audience.

While Desperate Housewives lures in male viewers with sexually naughty themes (it is apparently extremely popular in Australia among men), The L Word panders to the male viewer by constantly triangulating romantic and sexual scenes between women with a male viewer, often explicitly a voyeuristic male viewer. In one story line, one of the women's male room mates sets up a web cam to watch what happens in her bedroom; and in another, a bisexual character's boyfriend is present during her interactions with women. In a really memorable scene, a lesbian couple, Tina and Bette, who are trying to get pregnant, pick up a lucky stud who thinks he is walking into the fantasy of his life but quickly realizes that the lovely ladies who have brought him home only want his sperm. This precipitates a ludicrous scene of recriminations in which the stud feels used and delivers one of the more political speeches of the series about sexual integrity! The L Word in Season One, in fact, gave up far too much time to this kind of male rage and in its deliberate bid for the hearts and minds of the 16-25 male viewership, it ignored its own queer spectators. 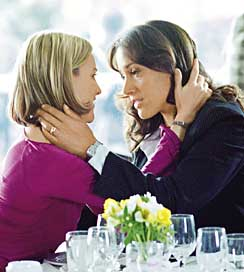 Some queer viewers have also critiqued The L Word for its heterosexualization of the characters. Very few of the women, in other words, actually look like lesbians (within a fairly broad range of expectations for what a “lesbian” might look like), none of them have a masculine appearance, and most of them would not look out of place on Desperate Housewives! In fact, lesbian comedienne, Marga Gomez famously wrote that the predominance of “hot” and feminine women on The L Word is not an aesthetic problem — they look good and are fun to watch — it is more, for her, a question of “dyke feng shui.” As she puts it, “you only see plain dykes in the background when the hotties go to a dance.” In other words, queer audiences want a bit of balance – a hot lady with her plain, butch/androgynous/slightly less feminine but equally hot counter-part. On heterosexual soaps like Desperate Housewives, after all, you get bitches, virgins, ingénues, adulterers, cads, nice guys, sensitive men, assertive women…you get a range of characters, in a range of gender roles, hooking up in a variety of combinations. The L Word, in its rather blatant attempt to give the stereotype of the dowdy dyke a very wide berth, tries to give us one airbrushed and properly feminine look and in the process it underestimates its very sophisticated and, by now, very committed queer fans.

As Desperate Housewives enters a new season, even the most avid fans can see trouble on the horizon. Any show that has several characters in comas at the same time, for example, has clearly run into a few narrative dead ends. And as time passes, the homely voice-overs by the very dead Mary Alice cease to provide a clever frame for the show's multiple mysteries and congeal instead into a rather moralistic, pious and smug soundtrack for the all too familiar parade of soap opera themes that the show will now trot out. And yet, it must be said that the international appeal of shows like Sex and the City, Desperate Housewives and The L Word, obviously, can be chalked up to many factors including intelligent dialogues, interesting story lines made more interesting by totally unlikely scenarios involving murder and betrayal, and much credit can be given to the warm and vigorous acting skills that all the women bring to their roles. At a time when Hollywood has very little use for women of a certain age, perhaps television is where women over 40 go to find roles beyond the bitter mother-in-law, the predatory divorcee or the lonely spinster. You will find all three of these roles in the soap operas too but at least in shows like Desperate Housewives and The L Word, women and queers get to win sometimes, and when they do we shouldn't be surprised to find ourselves in a topsy turvy moral universe where sin lies in playing it safe and virtue comes from daring to be desperate.