My two-year-old son recently developed a strong desire for ice cream. It began with his fascination for the local ice cream truck. Then came the stops at Baskin Robbins. Soon we were making ice cream cones at home regularly, even running to the store on occasion to procure the treat lest a temper tantrum ensue. For the most part, I have happily allowed my son his pleasure, even when he has not eaten every morsel of his dinner. Am I a bad parent? Have I set into motion a lifetime of unhealthy eating habits? Will my choices on matters as trivial as the ice cream seal his fate in life? Of course not, but after watching back-to-back episodes of Honey We're Killing the Kids recently I began to wonder.

Each week on the TLC reality program, a stern nutritionist named Dr. Lisa Hark sets out to demonstrate how “everyday choices can have long-term impacts on children, and offers both the motivation and the know-how to help turn families lives around.” These are technical
lessons, with Dr. Hark focusing on changing the “bad habits” of an actual family in three weeks. They are also hyperbolic: the parents, who are typically chastised for smoking and overeating, are shocked into a household regime change by Hark's accusation they're “killing their kids” by letting them eat too much junk food and play video games instead of exercising. Digitally aged images of the kids at 40 created with “state-of-the-art” technology and “certified assessments based on measurements and statistics” (whatever the hell that means) are profoundly unflattering. As if the sallow skin, stained teeth, heavy jowls, stringy hair and dour facial expressions weren't enough, the photos themselves look like mug shots. No wonder the parents gasp and swiftly agree to cooperate with the Dr.’s “rules, guidelines and techniques” for transforming the children’s future health and lifestyle. Of course, this being a reality show, they are just playing the “role” assigned to them. 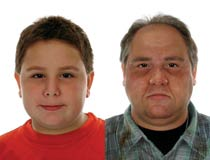 The televised crash course follows the template we know from other TV interventions. The Dr. arrives at the home, observes the family in their natural habitat, locks up all the junk food, introduces the new rules, and then sums them up with a list of easy-to-memorize slogans (e.g. “Sack the Sugar,” “ExerciseTogether”). Cameras capture the initial resentments, mid-episode
slip-ups and eventual mastering of the suggested “healthy” lifestyle. If you've seen one episode, you've seen them all.

This doesn't diminish the importance of the show, which matters less as a unique text than as part of the revitalization of social work through television. In the early part of the 20th century, social workers preached the science of “right living” to working class and immigrant populations in the guise of improving their welfare; eventually, their concerns and techniques
were folded into the programs of the welfare state. Reality TV re-privatizes social work by combating through commerce a whole range of “problems” that have historically fallen under the gaze of welfare offices, including health and nutrition (Honey We're Killing the Kids), hygiene (How Clean is Your House), substance abuse (Intervention), childrearing (Supernanny), juvenile delinquency (Brat Camp), vocational rehabilitation (Starting Over) and domestic relationships (Dr. Phil).

During the progressive era, social workers were part of a class of professional reformers who also fought for policy changes, from child labor laws to the Food and Drug Act. The current wave of TV social work, on the other hand, focuses only with guiding the “choices” of individuals. The programs seek to instill personal responsibility for the “right way” of caring for the self by shaming “other” people on camera and circulating technical expertise that spills into web sites,
workbooks, interactive games and merchandising tie-ins.

While there's no direct link between the diffuse aims of reality TV and the policies of rulers and politicians, there are some similarities of reasoning that are worth considering. Honey We're Killing the Kids, for example, has appeared at a juncture when the state is concerned about the health and fitness of the population but unwilling to do anything about it that would compromise the “hands off” approach to government favored by today's neoliberal regimes. During the 2004 House Government Reform Committee's hearings on “The Supersizing of America,” Marshall Manson of the rightwing Center for Individual Freedom criticized the Center for Science in the Public Interest for pushing “extreme” measures like regulating the food sold in schools and “mandated labeling of restaurants with detailed nutrition information.” Linking the regulation of culinary commerce to the erosion of free choice,
Manson told the committee: “Our democracy is founded on the idea that individuals have basic freedoms. Among these, certainly, is the right to choose what we put on our plates and in our goblets . . . anti-food extremists like CSPI would gladly take away that freedom and mandate
our diet in order to save us from ourselves. It is time for these zealous advocates to understand that it is not the federal government's job to save us from ourselves by making our choices for us.” 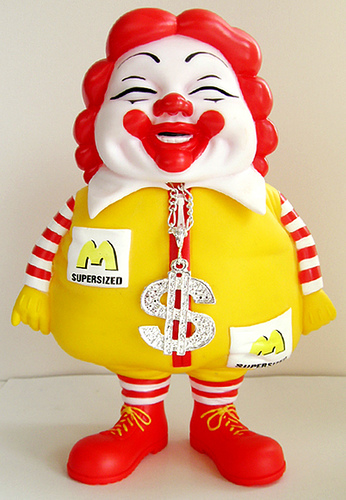 As Manson stated, the only legitimate option for the state within this line of reasoning is to encourage “responsible decision-making” in consumers who are not only “free” to manage their own health but are expected to do so. Toward this end, George W. Bush launched Steps to a Healthier US to encourage “simple improvements in physical activity, diet and behavior” as a means to controlling chronic disease. Of course, this virtually unknown program is no match for the many temptations of the consumer culture and here's where TV comes in.

As Nikolas Rose argues, cultural technologies (such as television) that shape and guide conduct independently of the state become more important as official government recedes into the background. Honey, We're Killing the Kids works as such a technology, attempting to help solve the “crisis” of childhoodobesity by revealing its causes in the bad habits of individuals and issuing a “critical wake-up call for parents.” Promoting personal responsibility via cultural commerce, the show offers an array of resources, including the TV show, the web site and merchandise for “choosing” a healthy lifestyle as a matter of one's freedom. Reformers like Manson have no problem with commercial TV shows taking up this persuasive role, because their authority to govern is sanctioned by the commercial logic of “supply and demand.”

It isn't hard to find fault with Honey, We're Killing the Kids. The snarky attitude, the sensational scare tactics, and stereotyping of lower-middle class families as overweight, chain-smoking couch potatoes are obvious. Like so many nonfiction lifestyle programs on television, it puts the impetus to succeed in health and in life on individuals, and ignores big picture issues like the high cost of organic food, the erosion of funding for food stamps, and the class system that makes fast food a more viable option than the lean proteins, vegetables and whole grains promoted by nutritional experts. The irony of commercial
television preaching nutritional fitness as a solution to national health problems is not lost on those of us who remember Ronald Reagan insisting (in the midst of debates over his cuts to school lunch programs) that ketchup is a vegetable.

The trickier problem with Honey, We're Killing the Kids has to do with the politics of desire. What this program is telling the fictional masses signified by excess flesh, cigarette habits and addiction to television is that their pleasures in food are wrong and must be rehabilitated by experts. Hidden camera footage of resentful children (and sometimes their parents as well) breaking into the forbidden junk food stashes is replayed to condemn those who are unable to control their cravings (though the break-ins can be interpreted as resistance
to this power play). The left, which certainly has its own strand of Puritanism, needs to be cautious about “do good” attempts to regulate people's desires, whether they're for food, sex, culture or whatever.

Honey, We're Killing the Kids links the desire for food to the impending
fear of disease, and promotes the absurd idea that our social, economic and physical fate in life is determined more by the little choices we make than the social structures we inhabit. But like the rest of us, I'll continue to watch anyway.