I Am The One Who Acts: Breaking Down Bryan Cranston’s Breaking Bad Performance
R. Colin Tait / Texas Christian University 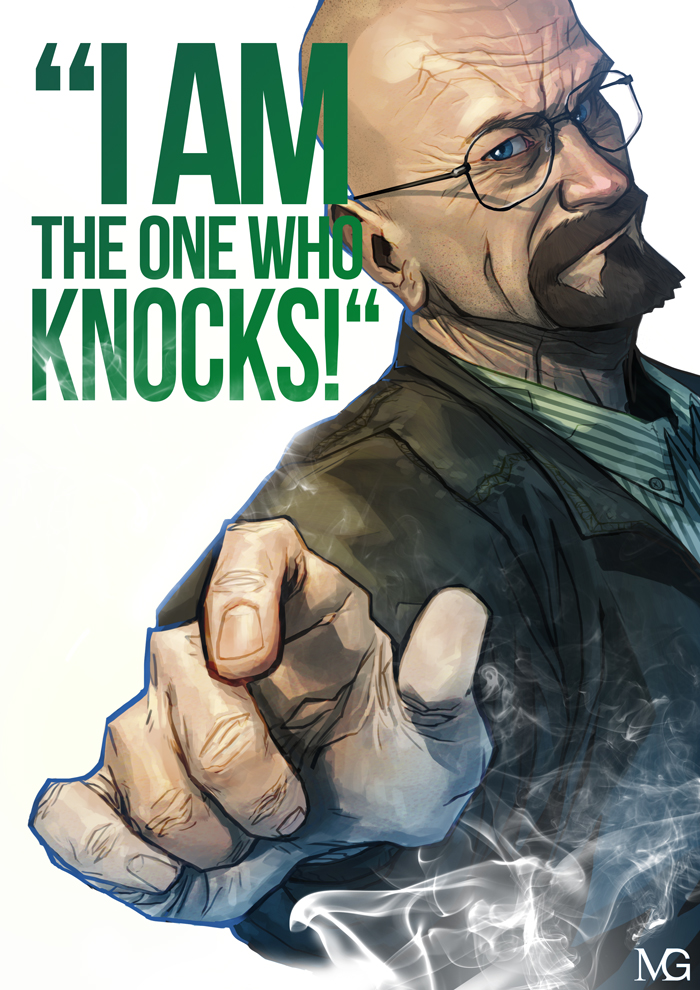 “The worst thing the French ever gave us is the auteur theory,” he said flatly. “It’s a load of horseshit. You don’t make a movie by yourself, you certainly don’t make a TV show by yourself. You invest people in their work. You make people feel comfortable in their jobs; you keep people talking.”
– Vince Gilligan1
Despite Breaking Bad’s series creator and showrunner Vince Gilligan’s protestations to the contrary, orthodoxy surrounding the “showrunner” as the primary author of TV is a discourse rigidly embedded within the discipline — one that sweepingly omits the contributions of many collaborators and actors in particular. This omission is partly due to the lack of scholarship that concretely explains what an actor does within a given show. Since an actor’s labor is ethereal in nature, credit tends to be attributed to other agents, such as writers and directors, or ignored completely.

Acting is not commonly discussed in relation to television. More often than not, television acting, and by proxy, television actors, has been viewed as inferior to film, which is more often associated with prestige. Although TV’s cultural value is on the upswing, perceptions about TV acting is still an under-examined subject, especially in latest era of great television. However, as Torben Grodal reminds us, scholars and critics are drawn to directors, while audiences relate to actors, dissertation writer and their performances.2
So, while TV may now be more cinematic, good acting is still what ultimately fuels the engine.

I offer Bryan Cranston’s universally lauded, multiple Emmy Award-winning performance in Breaking Bad as an intervention to this problem. By characterizing Cranston’s portrayal of Walter White as a “long-form performance text,” and concentrating on what is arguably the series’ most memorable moment – I propose an alternate method to consider television authorship and an actor’s contribution to the series. As Cranston’s five-season-long character arc from the nebbish White to methamphetamine kingpin “Heisenberg” is one of the most pronounced and vivid transformations in television history, I maintain that it can consequently be utilized to read moments of agency and labor that Cranston brought to his role.

Only by considering Cranston as a complementary author to showrunner Vince Gilligan can we understand how he shapes the series, and how actors function within television more generally. The question remains: how do we quantify Cranston’s performance of research papers as Walter White? Without direct access to his script pages, there is little room for such analysis of the actor’s interpretation, not to mention the difficulty of translation from the script page to the screen. Moreover, how is Cranston’s performance shaped by his fellow actors, including multiple Emmy-winning performers Aaron Paul and Anna Gunn.

Inspired by Cynthia Baron and Sharon Marie Carnicke’s analysis of “character interactions” within The Grifters (Steven Frears, 1990) I will analyze Breaking Bad’s most famous monologue3 . Next, I will illustrate the scene’s context in order to account for the shifts within it. I will also position this scene within the rules of classical tragedy, where the protagonist makes a fatal decision that ultimately leads to his downfall. Finally, I will analyze the scene as a performance within a performance, where Walt’s bravado in the scene is actually a sign of his weakness rather than his strength.

The “I Am The One Who Knocks” Scene

The scene, From Season 4 Episode 6 “Cornered”
Adding nuance to the monologue deemed the series best is not an easy task, particularly as the “I am the one who knocks” speech has taken on a life of its own as a robust paratext4 –as seen in Samuel L. Jackson’s reinterpretation of the monologue and its many, many online imitators. .

Samuel L. Jackson’s version of the monologue
Putting this monologue back into context is a necessary step if we are to understand not only how these lines work within the larger scene, but also within the series as a whole. Recontextualizing the lines also means remembering that Walter is not operating from a position of strength at this moment of the series and that these lines are spoken in order to make his wife Skylar submit to his will. 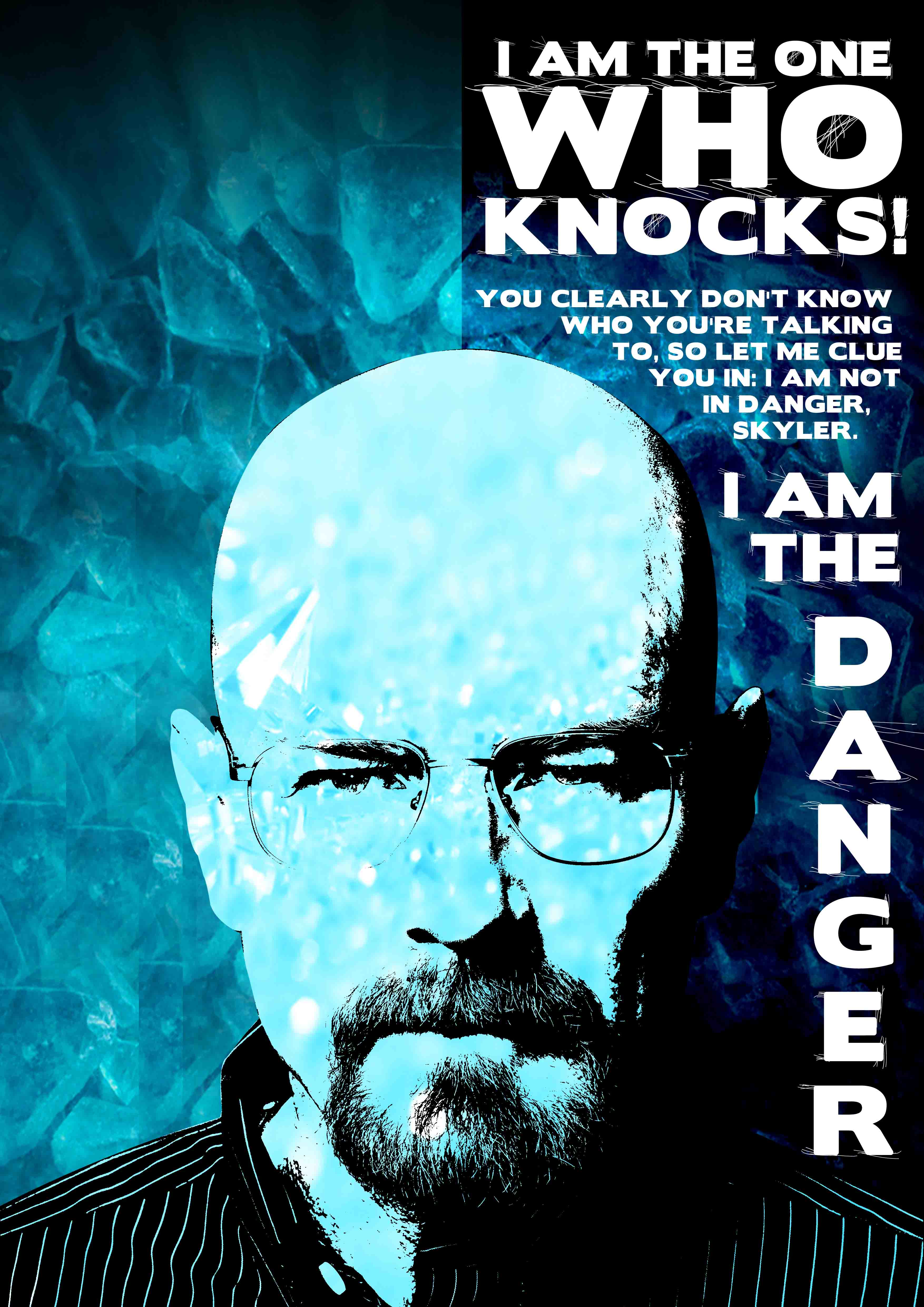 The scene actually begins as Skylar listens to her husband’s message on the answering machine and she believes that she detects fear in his voice. Then, she walks into the bedroom where Walter is nursing his hangover and eventually goads him into talking to her. Conflict here is based on a balance of power, and this power is exchanged within the course of the scene. Walter also begins lying down, pretending to be hung over and then snaps into lucidity with Skylar standing and when they are level to one another (when this clip begins) they are on equal footing and equal volume.

As famed acting guru Stella Adler once pronounced, all “acting is reacting.” One reason that this scene is so memorable is because of the skillful work of Anna Gunn as Skyler White. While Cranston may score the goal in this particular power play it is only because he gets a great assist from his scene partner. So despite this scene being more famous for Cranston’s monologue, it is his scene partner Gunn who anchors the action and has the more difficult role of reacting to Walter’s bravado. 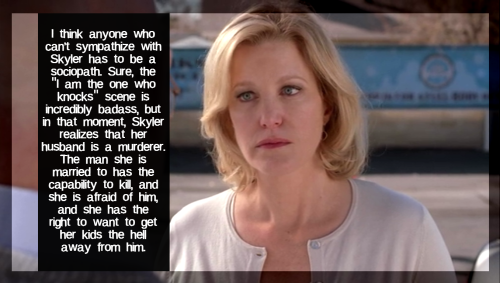 What the meme-ification of this line misses, then, is the opportunity for us to read the scene as it plays out organically. Thus, the first step in understanding how it operates is to remember that it opens and closes on Skylar (Anna Gunn), thus giving her much of the focus. In fact, when put into this context one can easily argue that the scene is, in fact, hers, rather than Walt’s. Watching the scene again, we can see the dynamics of power and conflict within it.

Indeed, as Cranston relates in the following clip, the scene takes place at Walt’s complete transformation into Heisenberg as he reveals his tragic flaw.

Dramatic irony also comes into play here. What the audience knows and Skylar doesn’t is that Walter’s speech is itself an act, very much calculated in order to silence his wife on the subject. So, despite Walter’s protestations to the contrary term papers, what is clear in the scene, is that he is actually in a much more precarious position than he is indicating here — making this a violent performance within a performance.

Moreover, what the scene ultimately reveals is that Walt’s superpower is not his ability to cook crystal meth better than anyone else, but, in fact, it is the power of his performances and his ability to lie convincingly. In other words, he is an actor of the highest order, and much of his empire is built on theatre — the main source of his power.

There is also the question of whose scene this is. Since it begins and ends with Skylar, I would argue that it is actually hers. Again, following Adler, her reactions to Walter’s bravado are crucial to the way the scene plays out. Taken as a whole, we see a classic staging of the transfer of power. It is also a demonstration of extreme violence under the surface and from here, Skylar is basically cowed into submission by Walter’s display. I would also state that what is unsaid is as important as what is being said and the subtextual dimension (what is neither spoken nor heard within the scene, but is clearly going on in Skylar’s silence) speaks more effectively than Walter’s monologue does. Here, the acting is combined with editing to register the contrast between Walter’s madness and Skylar’s growing anxiety.

Within this short piece, I have demonstrated that television acting needs to be taken seriously within the context of television’s commercial and critical resurgence. Only by examining Walter White’s famous monologue in relation to the character it is spoken at, and within the series-long character arcs that Cranston, Brandt and Paul perform in, can we productively come to conclusions  at https://grademiners.com/lab-report about the state of contemporary TV. What I offer here is merely a snapshot of the kinds of methods that could be employed if critics and scholars are to effectively understand some of the overlooked elements that are largely responsible for the current ascension of Television’s “Quality.”