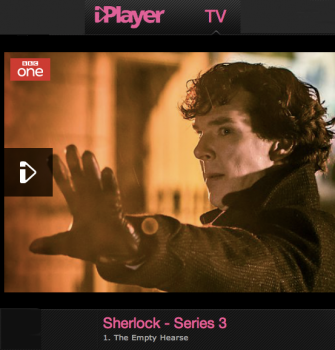 Sherlock on the BBC’s iPlayer

“Perhaps even more directly than questions of production or content, the study of distribution cuts straight to the heart of who has access to culture and on what terms.” – Joshua Braun1

While recent U.S. TV industry retrospectives were right to declare 2013 the year of Netflix, I would nominate for runner-up consideration the increased presence of foreign, especially British, imports on U.S. screens. Netflix played a role in that trend, as the streaming service added Channel 4’s Derek to its offerings. Elsewhere, Hulu tried to distinguish itself with imports like Moone Boy and Misfits, while The Returned, Top of the Lake, Orphan Black, and Broadchurch had cable viewers abuzz. Meanwhile, critical acclaim for more narrowly distributed shows like Borgen (available in the US on the satellite channel Link TV) and Black Mirror (on DirecTV’s Audience Network) left some viewers pleading for help with locating them.

While Critics Touted Black Mirror, Viewers Struggled to Find It

In his tweet, @vogon expressed a desire to stay on the legal side of transnational viewership, but not all are so willing, and it’s getting remarkably easier, technologically and perhaps even morally, to cross that border. 2014 was inaugurated with a prime example via BBC One’s Series 3 premiere of Sherlock on New Year’s Day. The series won’t reach American TV sets until January 19th, when it begins a Sunday night pairing with Downton Abbey on PBS, so no one on American soil, aside from TV critics with screeners, should be able to see Sherlock’s “The Empty Hearse” until then. Yet my Twitter feed revealed numerous Americans tweeting about watching it online.

The BBC Helping An American Not Miss Sherlock

The lure of early access is strong, driven by such aspects as the cultural cachet of seeing something before others, the desire to participate in a global fan community, and the fear of being spoiled (exacerbated in Sherlock’s case by a spectacular Series 2 cliffhanger followed by an inordinately long hiatus). In some cases, such as Doctor Who’s airings on BBC America, these actions may also be motivated by frustration with domestic presentational aspects, with an egregious example offered by the Christmas Day airing of “The Time of the Doctor,” wherein a commercial break interrupted the introduction of Peter Capaldi’s new Doctor in the middle of the regeneration process. Most fundamentally, there is the desire to not have to wait when one feels it’s not warranted.

A TV Critic Laments a Delay

Of course, the people whose tweets I have captured here are not the average viewer (and not just because Twitter itself is a niche medium). Most will wait and watch via whatever means outlets that are familiar to them make available, as the success of the shows listed above (and Downton Abbey’s PBS ratings) would prove. But those examples also offer evidence of audiences increasingly wanting to access international content, and a corresponding growth in awareness of “Alternate Methods” becomes inevitable in an age of information sharing.

Kids May Teach Their Parents Piracy

In terms of transnational flows, I assume and hope that we will continue to move in the direction of more, and more timely, legal access, not less. But even as more TV material is becoming available online in the US, it’s often tied to pay TV subscriptions, with inconsistent access based on provider agreements. As an example, ABC’s recent move to reward only some pay TV subscribers with earlier access to time-shifted shows online raises fundamental questions about the public responsibility of those licensed to use the airwaves. In the UK, in contrast, open online access appears to be growing, and in the name of public service, even if there is still a measure self-preservation behind that. Specifically, the BBC recently announced plans to expand availability of shows on its iPlayer service, and this strategy seems to be key to the corporation’s efforts to defend the viability of its license fee funding model in the digital age. It is quite striking, especially in comparison to U.S. examples like HBO Go, how easy it is to access iPlayer content, even from outside the UK. With the assistance of a VPN proxy to convince iPlayer that the user’s computer is in the UK, one needs only to click play, no license fee authentication required. Surprisingly, it is actually legal for Britons themselves who are not paying the license fee to watch time-shifted shows on the iPlayer, as long as they don’t own a television set and watch nothing live.

I have to assume that few non-license fee payers, British or otherwise, linger for more than a few seconds over the moral decision to click “Watch now” on live iPlayer content. Michael Z. Newman has written of how some viewers morally reconcile illegally accessing TV content online, particularly based on a conception that network TV is “free.”2 Such justifications get much more complicated with BBC content, where it’s not corporations but individual people who have helped underwrite the content. But again, a mere button-click does not pose much of a obstacle to make you think about those consequences. I can’t imagine the BBC will be this lax about online access forever, but as someone who researches and teaches British TV, I would happily pay the license fee if given the opportunity to do so. This a commonly expressed sentiment: make content available to viewers legally and conveniently across devices they prefer, and they will access it that way.

But the BBC cannot substantially open up global subscription possibilities without undercutting either its domestic funding logic or BBC Worldwide’s business model. Indeed, the most fundamental bottom line to these transnational flows is how geographically-specific licensing agreements are violated by unfettered online access. I have little reason to watch Doctor Who on BBC America or Sherlock on PBS if I can access those shows directly from iPlayer, especially if I can then use Airplay or Chromecast to throw my laptop screen onto my TV set. And due to such factors as publicity needs and differing scheduling and programming practices for outlets, day-and-date international releases are not always feasible.

To combat piracy, it’s prudent for distributors to make all content more easily accessible legally, yet to do so broadly with transnational content puts into jeopardy global distribution contracts and the substantial economic advantages of controlling content geographically. This issue is as old as broadcasting itself, of course. As Michele Hilmes’ work has explored, national borders have always been essential to broadcast policy and economics yet also challenging to police.3 The very technology of broadcasting – the airwaves, the ether – makes strict geographic definition difficult, and the Dr. Brinkleys and Captain Leonard Plugges of history show how borders can be effectively transgressed. The modern internet and its “tubes” are less diffuse than the radio airwaves, yet geographic definitions are still difficult to maintain, and individual users have more power than they ever did in the broadcast era, as a simple VPN proxy can trick a geo-fence and enable spectatorial forms of illegal immigration around the entire globe.

Such circumstances are part of larger forces pushing television further along the path toward what Derek Kompare has called the shift “from flow to file,” as we move from strategically scheduled bundles of programs and interstitials on branded outlets to discrete shows “made available directly to individuals in small packages on an ad hoc basis.” 4 Comcast, the BBC, even Netflix all have a substantial stake in maintaining today’s outlet-based infrastructure for tomorrow’s distribution of content, but the grounds on which that control is secured will only shift more as we go forward. Committed audiences willing to dig deeper to consume new content and satisfy individual tastes might increasingly seek out “Alternate Methods,” leaving distributors scrambling to respond, while niche channels may find it lucrative to rely on distinguished imports to define their outlets. Looking forward, I can’t imagine we’ll ever get to a point when anyone will be able to legally access anything from any country as they see fit.5 There is too much at stake for media companies in tightly controlling avenues of distribution around preferred outlets, a fundamental linchpin of the corporate dominance of media industry history. The current era is witnessing only one round of an ongoing fight between content’s gatekeepers and viewers seeking to access that content on their own terms and without borders.