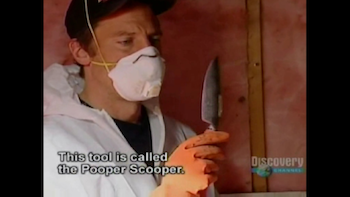 Commercial television, particularly when associated with cable networks and global distribution, is often criticised for presenting us with a sanitised view of the world.  This is particularly true when it comes to American programs which are targeted for their cliché Hollywood happy endings, idyllic families who lead overly materialistic lifestyles.  This political denigration of TV is a complaint about how programs offer us an escape from the harsher, dirtier realities of life.  But if we take the metaphor of dirt more seriously, it’s possible to find some interesting political meanings attached to its use on cable television.  Dirty Jobs with Mike Rowe is a reality-documentary style program about dirty, hazardous, strange or unconventional jobs.  It uses the concept of dirt to address some significant taboos about class within America television culture.

According to the format employees of different occupations offer the host on-the-spot training in their job for a day.  The first series covers a range of professions not usually seen on TV, from blue collar sewer inspector and garbage collectors, to more ‘specialised’ occupations like snake research and chicken sexing.  The program explicitly avoids political discussion of work (such as labour laws, or employment contracts), but Rowe’s political interest in dirt is encapsulated in the intro: ‘I explore the country looking for people who aren’t afraid to get dirty — hard-working men and women who earn an honest living doing the kinds of jobs that make civilized life possible for the rest of us’.  By connecting the ‘fruits’ of a hard-working sewer inspector with the comfort of the home television viewer, the politics of dirt in Dirty Jobs has shown me a side of American TV culture non-Americans rarely see from the outside — working-class America.

Class and the politics of ‘dirt’ 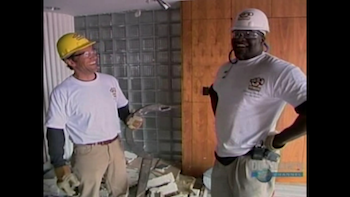 According to the anthropologist Mary Douglas1 , the concept of dirt is central to the way that human societies impose meaning on the world, and thus how we see different classes of people.  Dirt is not necessarily about that which is unclean, but also that which may be morally impure or polluted.  In the early 20th Century, for instance, scientists associated working class people with dirt, discouraging educated citizens from coming into contact with the ‘unwashed masses’.

Though the working people in Dirty Jobs are far from the silent majority of the Victorian era, it’s still true that television reinforces certain taboos about dirt.  Television adverts for detergents, hand washes and toothpastes, for instance, present an impressive visual array of nasty, life-threatening bacteria to worry us.  Scientific discourses can also be found in reality programs like Filth Files (NZ) and How Clean is Your House? (UK), which try to regulate the unruliness of dirt with lab tests, bacterial swabs and clipboard-carrying health inspectors.  Dirty Jobs does not rely upon such scientific authority, but rather celebrates dirt through the real-workaday lives of its guests.

One way in which the program brings American working culture to the fore is by adopting the vernacular language of the people featured on the show.  Guests use their own terms to describe different kinds of equipment, machines and processes which help them to manage dirt.  The most inventive (and humorous) examples deal human excrement, and include ‘the turd burner’ (an incinerating toilet), ‘a turd hurler’ (a septic tank scoop), ‘the pooper scooper’ (a garden trowel for cleaning sewerage) and ‘the mechanical butthole’ (a manure screw press separator).  Even more mundane tools are rebadged, given names like ‘the tooth pick’ (a demolition pry bar), ‘the mucker’ (a coal excavator) and the ‘chucking tool’ (spatula for shelling abalones).  In these examples, the vernacular naming practices help structure our understanding of the work, through the shared culture of the workers themselves.

For me, an interested but distant viewer of American television, Dirty Jobs deviates from many other US export programs in its presentation of ordinary working class people.  For that reason, I’ve always been fascinated by working class American culture – not knowing exactly what it looks like, I’m aware that my own fascination may well be the result of an attraction to the ‘forbidden’.  But this makes sense because in Australia we’ve only really been exposed to ‘clean’-cut, middle-class depictions of American life – from Dallas, The Cosby Show and The Fresh Prince in the eighties; Seinfeld, Frasier and The Nanny et al in the nineties; The OC and Friends, to name a few in the 2000s.  Of course, these soap and drama programs are part of a tradition of American representations of lifestyle glamour and success, rather than the UK tradition which favours ‘social reality’ programs like East Enders and Coronation Street. 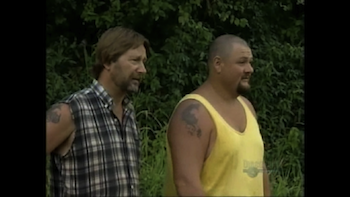 Even though American talk shows, such as Ricky Lake and Jerry Springer, feature working class participants, their source of entertainment are more dramatically staged.   Australian audiences certainly enjoyed Jerry Springer, but I think this depiction of American culture is seen for what it is – a very trashy, but nevertheless enjoyable, kind of burlesque.  Springer is over the top, especially its ironic dealing with poorer – some may say ‘trailer’ – elements of American culture.  Though the ‘trailer trash’ or ‘redneck’ culture may provide quite humorous racial representations of American poverty, it’s difficult to find other images of working class people outside of these comedy/talk show traditions.  In the late 1990s, for instance, Channel Ten aired a US series called the Jeff Foxworthy Show, the first so-called ‘redneck’ sitcom.  Though I cringed through every episode, I also watched for want of seeing a different side of America family life.  The program was soon taken off air, and I haven’t seen anything since which has given me a sense of how working Americans think or act in everyday contexts – be they black, white or white trash.

The ‘Mucky and Ducky’ Philosophy 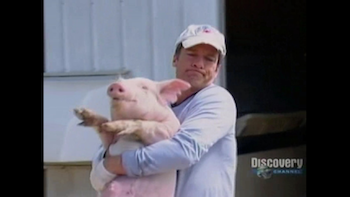 Without going as far as saying that Dirty Jobs is totally revolutionary, I would suggest that it exposes a more vernacular sense of America than many other programs and genres.  Part of the novelty is how ordinary perspectives are not only incorporated into the show, but how they actually guide our understanding of the program’s subject matter.  That is, we understand these dirty jobs through the words and thoughts of the people who perform them.  In the pilot episode Rowe is shown how to fillet a fish, and his mentor for the day, Rene, warns him that ‘you’re going to get really mucky and ducky’.  Rowe’s reply became the famous sound bite in the show’s introduction – ‘did you say “mucky and ducky?”’  In the episode ‘Road-kill cleaner’, ‘Dean’ explains to Rowe about how repulsive he finds his job – ‘there’s times you either have to laugh or throw up, whichever comes first’.  Guests are regular people, but the show makes them into something more for a few minutes – they are experts with their own important knowledge and skills.  The ‘mucky and ducky’ philosophy is not one to be ridiculed or ‘trashed’, but one that shows us a more balanced, diverse picture of American culture.

To view the program’s celebration of ‘dirt’ as a form of working class subversion of middle-class binaries would be to simplify the program’s much more subtle engagement with working America.  That is, though the show engages significantly with working class professionals, it also blurs any plain sense of class distinction with groups of people based upon income.  After all, dirty jobs belong to doctors, animal researchers, naturalists, farmers, horticulturalists, worm farmers, tanners and winemakers too.  When Mike is shown how to ‘noodle’ for catfish, which is a technique for luring fish by trawling the bottom of a lake, he shows us that Dirty Jobs are not necessarily even about work per se.  This activity is not introduced as a paid occupation, but rather a favoured pastime of two local Oklahomans called ‘Don’ and ‘Jerry’.2 They end up catching a number of fish, then fillet, cook and eat them over a few beers later in the day.  Don has a mullet hair-cut and sleeveless shirt, and Jerry wears a bandana and has tattoos.  These are signifiers of working class culture, but their incomes and occupations are not important in this segment.  For Dirty Jobs is about how people are forced to deal with dirt as an everyday substance, and how their vernacular philosophies reflect the uniqueness and inventiveness of working culture in dealing with this very biological, human subject.

And as an Australian consumer of American popular culture, where else would I get to see two Americans fishing for catfish with their bare hands?  As a common element shared by different people, no matter what cultural or class boundaries we use to separate ourselves, dirt is an inevitable part of how we order our lives.  Dirty jobs are traditionally seen as working class occupations.  But an acknowledgment of dirt’s disordering properties can draw attention to some of the social conventions we erect around our working lives, and the values we place upon them.   For the dirt in Dirty Jobs enables us to see different kinds of people, like Don and Jerry, usually not seen on the export line of American television culture.

In a heavily Americanised Anglophonic television world, it’s important to realise that the American programs we see are not always representative of the America we think exists, in America.  Far too often the country is talked about in an abstract sense when we are reminded of its politics in the news media, for instance, and its poor foreign relations record – from places like Panama, Afghanistan, Israel and Iraq.  But in these important political debates, it’s often difficult to get a sense of America beyond the middle-class depictions we see on Oprah, CNN and the late night talk shows.

At least for the sake of the country’s global public relations record, it may be worth celebrating some of these dirtier parts of its television culture.