From “Play to Display”: Parkour as Media-Mimetics, or Nature Reclamation?
Matthew Ferrari / University of Massachusetts – Amherst 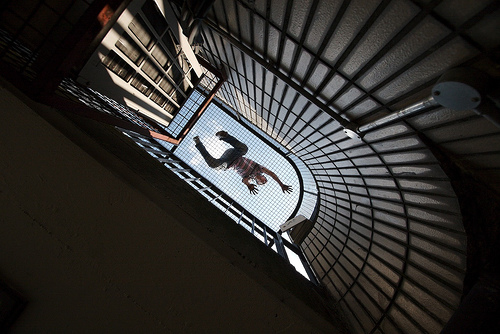 Daniel Ilabaca does a “cat crawl” over mesh.
“In some sense, Parkour has been around as long as man’s need to hunt
and avoid being hunted.” –American Parkour Inc.1
“All the techniques in Parkour are from watching the monkeys.” –David Belle2
“It is more than training, it’s relearning what we’ve lost.” –Sébastien Foucan3

“Fight or flight?” In previous columns I have often emphasized fight, as a matter of topic at least, addressing the mixed martial arts promotional imaginary and a notion of “combat aesthetics.” Here I emphasize flight. Not literally, but to look at internal tensions in the increasingly visible street “sport” Parkour. The tensions are between the enacting of a primitivist rhetoric of origins in Parkour’s philosophy (as indicated in the quotes above), and conversely, what I submit might be considered a mimetic play-form of mass-mediated influences. Instead of considering Parkour’s cultural flow from the margins to the mainstream, what about considering its flow from mainstream to margins back to mainstream again? This is, as David Harvey suggests, the deconstructive maneuver of looking for one “text” inside another. In addition to considering Parkour’s apparent movement from obscurity to mainstream cultural visibility, this is also a remarkable case of an independent-spirited, non-commercially motivated form of “play” moving rapidly into a “display”-based commodity form.4 And lastly, I wish to tie Parkour’s suggestion of a human/animal performance continuum to Avatar’s recent promotional pairing with the NBA playoffs.

For the uninitiated, Parkour, also referred to as Freerunning, is “the art of moving through your environment using only your body and the surroundings to propel yourself. It can include running, jumping, climbing, even crawling, if that is the most suitable movement for the situation.”5 And while Parkour is, in philosophy, not relegated to any particular landscape, it is taken up mostly in urban and suburban landscapes. The reference to a “flight” response, in all of its socio-biological implications, stems from Parkour’s basic philosophy that, more important than the repertoire of movements is the “intention” of getting from one point to another as quickly and efficiently as possible, as if it were a matter of survival. American Parkour claims, “if the intention is to get somewhere using the most effective movements with the least loss of momentum, then it could probably be considered Parkour.”6 Founded by David Belle and Sébastien Foucan in France during the 90’s, Parkour’s philosophy and practical history can be traced further back to Georges Hébert’s “méthode naturelle” used in training the French military, which was at least in part inspired from observing indigenous populations in Africa.7 Again, the ancestral environment of evolutionary psychology is invoked in describing Parkour as “the form of movement that our ancient ancestors may have used to hunt for food, or escape from predators on the plains of Africa. There is certainly an instinctual quality to it. (…) In practicing Parkour, we are reviving and honing that ancient instinct.”8

The flow of Parkour into the mainstream has functioned primarily to reinvigorate realism in action genres, especially that most integral of action film tropes –the chase sequence (most notably seen in Casino Royale, District B-13, and the recently released sequel: District B-13: Ultimatum. Parkour has also appeared in advertisements for Scion cars, the BBC, MTV, Nike, and Canon, to name a few. The documentaries Jump London and Jump Britain were also important factors in putting Parkour on the map. 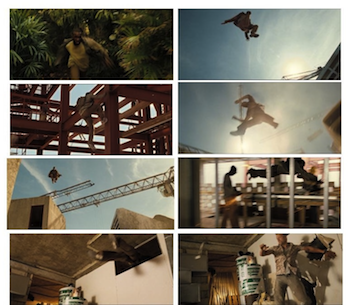 I want to suggest that we look at Parkour as an enactment of sensational kinesthetic tropes prefigured in martial arts and action cinema, video games, and even comic books. As much as it may be appealing to follow the romantic notion of Parkour as human-nature reclamation (reclamation of instinct, animal-like physical prowess, etc.), it is hard to completely ignore the visual/formal affinities between how the practice is documented and the aforementioned spectacular action genres. All the while these romantic “myths of origin” are being purveyed, attention is diverted from the visual evidence suggesting the physical form as an expressive, mimetic play of existing action media tropes, which then complicates (if not contradicts) the conveniently appropriated rhetoric of the human animal and “natural” bodily prowess “reclaimed.” To what extent should we buy into the discourses of this particular version of romantic primitivism? Or, alternatively, take a view of it as an image-fueled imitative behavior extending more immediately from proto-parkourist action stars like Bruce Lee and Jackie Chan –and all of the generically linked visual media unified through similar kinesthetic repertoires of the spectacular action body– than from our legitimate alienation from innate bodily impulses and abilities? 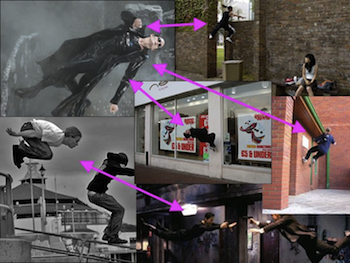 Visual affinities between how Parkour is documented and commercial action media.

Allowing for a measure of both is called for, while the latter explanation is decidedly more cynical, poststructuralist, but also, thus far at least, not undertaken in any scholarly forum. Moreover, the view of Parkour as, in some sense, a media effect of the consumption of spectacular action genres is an important deconstructive avenue for better comprehending how much Parkour subverts the commodity spectacle, and how much it emerges from it. Discussions about Parkour online have casually noted that Jackie Chan was doing Parkour-like action sequences well before it emerged as a street and internet phenomenon (see video compilation). In an age of “wire-fu” and technified, hyper-edited action sequences, Parkour is capable of re-vivifying the chase sequence. But how much does Parkour exist now as a practice to be documented in spectacular ways? How much is this a form of expressive play motivated as much by a desire to record and witness oneself as a sensational action performer? Not to entirely discount the embodied experience and holistic benefits, but it is impossible to ignore the role of a subject’s internalization of spectacular action tropes and the related desires to experience the thrills and fear associated with it. Many of the amateur produced internet videos are constructed as virtual chase sequences, minus framing narrative motivations, other than the sheer thrill of flight. “Dispersion” is a good example of an extended chase sequence that utilizes (albeit spottily) matching-action and other continuity filmmaking techniques (see linked video). So is nature reclamation, or media-mimetics behind this transformation of play into display?

The tension between Parkour as a media-mimetics, versus Parkour as an authentic reclamation of the “natural” (or more precisely, a re-naturalization of human mobility in hybrid synthetic-natural landscapes) also presents, in my mind, another substantial case of the category of the primitive’s persistence as a free-floating signifier culture has trouble doing without. Some suggest that the “primitive” is dead, or at least that it has gone from being an external object (the anthropological primitive, out there in time and space) to part of the (internal) social-psyche of the western subject (and for my critical interests at least, this is a predominantly white, masculine subject).9 On the contrary, I maintain the primitive has only grown more persistent as an operative discourse in commodity culture as a necessary backwards-looking view from which to appreciate the present, in particular advancing states of human-technological extension, and alterity in general.

The continuum between animal and human performance is an aspect of popular primitivism(s) I have taken up in previous columns. Mariana Torgovnik defines at least one sense of primitivism as the “connections between humans/land, humans/animals, humans/minerals, of vital senses of relatedness and interdependence. Primitivism inhabits thinking about origins and pure states (…) and is the utopian desire to go back and recover irreducible features of the psyche, body, land, and community –to re-inhabit core experiences.”10 The status of Parkour as a popular primitivism is also evident in the names local groups of practitioners have given themselves, like “The Tribe,” “Urban Instincts,” “Tribal Movement,” “Street Animal,” “Sky Native,” and also in the titles of amateur produced videos, such as, “Escape,” “Timeless,” and “Dispersion.” 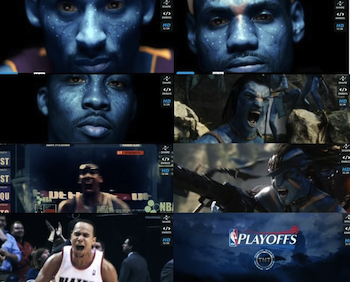 NBA stars as Na’vi, and the paralleling of Avatar and NBA action

The most significant recent example of idealizing animal above human is Avatar’s configuration of the “Na’vi” as animal-like in sensory intelligence (i.e. environmental awareness) and physical prowess. Seventy-five years ago Lovejoy and Boas named this particular sort of primitivism “animalitarianism,” tracing the history of primitivism’s tendency to hold features of the animal as “on the whole more admirable, more normal, or more fortunate than the human species” back to classical times.11 Today animalitarianism, for lack of a better term, is closely linked to environmentalism, as the “beasts” serve as our finest example of a species whose “desires are limited to their ‘natural’ needs and not, like man’s, expansive and insatiable.”12 But for all of Avatar’s positive messages about the Na’vi living in harmony with nature, these signs are easily misappropriated to sell things wholly contradictory to their original ideological impulse. For example, Avatar’s mode of animalitarianism lent itself well to a recent cross-promotion with the NBA. The ad baldly parallels Na’vi physical prowess in the wilds of Pandora with NBA athletes’ spectacular physical exploits. The synergy goes so far as to depict Kobe Bryant, Lebron James, and Dwight Howard as Na’vi, cross-cutting between warrior grimaces and spectacular flights on Pandora and the basketball court –a decidedly problematic racial equation.\

Parkour’s primitivism points to a striving and critique of modern alienation I admire. It represents a spirit of resistance to Eros-killing social obligations and confinements I want to get behind, and then it turns commodity. And while for the sake of critical analysis I have emphasized these tensions by drawing neat discursive boundaries between them, I realize they are not mutually exclusive. Maybe we can acknowledge this sort of grasping at pure states as hopeful, potentially resistant, and motivational rhetoric rather than something fully or authentically attainable, but we need to be alert to their abuses. 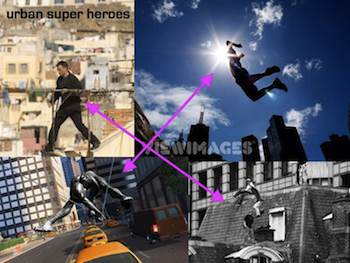 Visual affinities between how Parkour is documented and commercial action media