2010 Census and Grassroots Communities: Composing a Visual Heritage in the Digital Age
Konrad Ng / University of Hawai‘i at Mānoa 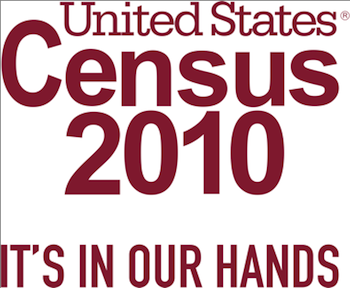 In June 2009, Republican Minnesota Representative Michele Bachman participated in a series of interviews123 outlining her opposition to the 2010 U.S. Census. In spite of the constitutionality of the census, assurances about privacy protections4 and non-partisan public service announcements5 and community-based video testimonials6 explaining the importance of the census in determining representation and funding, Bachman and others78 rejected the census because of concerns over cost, the role of government, the scope of information submitted and how such information would be used. Arguably, one of the most aggressive statements made against the census came from CNN political commentator and RedState.com editor Erick Erickson. In response to the American Community Survey (ACS), the ongoing national survey conducted by the U.S. Census Bureau, Erickson threatened to “[p]ull out my wife’s shotgun and see how that little ACS twerp likes being scared at the door.”9 A similar vein of angry opposition emerged during the recent health care overhaul where, like the census, the case against health care reform cited cost, constitutionality and scope of government power.101112 New York Times columnist Frank Rich, however, offered a different take. He stated that the protest was rooted in a “national existential reordering” and the “inexorable and immutable change in the very identity of America, not just its governance.” He wrote that these are

fears of disenfranchisement among a dwindling and threatened minority in the country no matter what policies were in play. When you hear demonstrators chant the slogan “‘Take our country back!,'” They can’t. Demographics are avatars of a change bigger than any bill contemplated by Obama or Congress. The week before the health care vote, The Times reported that births to Asian, black and Hispanic women accounted for 48 percent of all births in America in the 12 months ending in July 2008. By 2012, the next presidential election year, non-Hispanic white births will be in the minority. The Tea Party movement is virtually all white. The Republicans haven’t had a single African-American in the Senate or the House since 2003 and have had only three in total since 1935. Their anxieties about a rapidly changing America are well-grounded.13

Rich suggests that opposition to health care reform was not about the scope of government or its cost. Rather it was grounded in the portrait that the 2010 Census will reveal: an America that is becoming more Asian, black and Hispanic in composition.1415 Is intense resistance to the census truly about cost and how the government will use information or is it because the census will confirm the inevitability of a profound demographic shift? 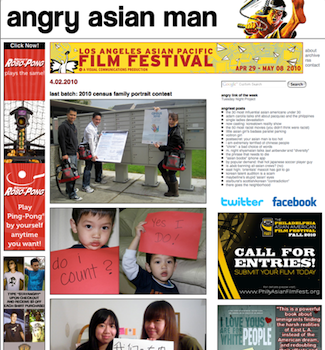 One way to address Rich’s provocative hypothesis is to inflect the trajectory of its inquiry through the notion of precedent. What is lacking in the American imaginary is a robust visual heritage with which to understand the conception of America that the U.S. Census Bureau projects the country will be. If, as New York Times film critics, Manohla Dargis and A.O. Scott contend, images and narratives offered in film and television helped America imagine an African American President before it occurred, then what kind of cultural production may help us imagine the new portrait of America? To quote Dargis and Scott,

[t]he movies of the past half-century hardly prophesy the present moment, but they offer intriguing premonitions, quick-sketch pictures and sometimes richly realized portraitsgrappling with issues of identity and the possibilities of power. They [can help]write the prehistory.16

Allow me to approach this topic by exploring the cultural production of grassroots communities. By “grassroots communities,” I describe two things. First, I mean the activities of groups organized around producing self-representations that strive to be more congruent with lived experience and demographic reality while invoking the possibilities of their transformation. Second, I mean expressions produced in creative media platforms such as YouTube, video games and social media. The key concept is that the digital apparatus of creative media enables communities to participate in forms of grassroots empowerment and self-representation. I not only mean the unprecedented interactivity and reach of digital media but also how grassroots cultural production often embodies a “Do It Yourself” (DIY) aesthetic. Put differently, grassroots cultural expressions tend to have production values that are less polished than the big budget artifice that defines commercial cinema, network television or corporative media. In DIY cultural production, the aesthetic and narrative aim is not visual pleasure or a dramatic arc, rather the focus is ethical in its pursuit of congruity. Let me briefly discuss three examples of Asian American grassroots community engagement that are helping form the visual heritage of a diverse America.

In late March 2010, Blogger Phil Yu of www.angryasianman.com held a 2010 Census photo contest to encourage participation in the census. Yu’s site is known for its aggregation of anything related to Asian America and for its thought provoking commentary on Asian American life.17 For the contest, readers were asked to submit a photo of their family while holding a completed Census form and a sign that stated “I COUNT” or “WE COUNT.” Yu posted submissions on his blog and Facebook page. All the photos shared the same aesthetic: minimally composed self-portraits of Asians, mixed-race Asians and others performing the actions required by Yu. The subjects were men and women of all ages posing in their everyday life. In a very simple way, Yu’s contest helped visualize the emerging portrait of America through the ethic of inclusion and populating the everyday with faces of diversity. 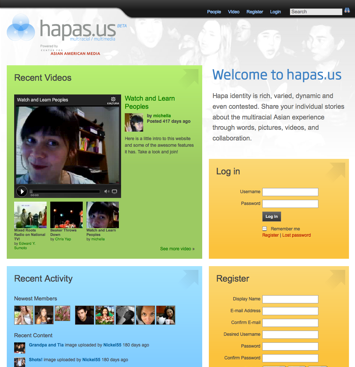 Another interesting example is the recent work by the Center for Asian American Media (CAAM), an independent media arts organization dedicated to producing rich and diverse representations of Asian American life. CAAM created a social networking site for “hapa” identity that is, multiracial Asian identity called hapas.us. While hapas.us is in its beta phase, the aim was to create an open forum to engage the multiracial Asian experience and start an archive for its changing representations. People who join the site can use video, text, photos and audio to present their story and express their concerns. Hapas.us does not seek to define the scope of “hapa” identity, rather its solicitation of multiracial DIY cultural production seeks to represent hapa-ness grounded in the life of its participants. The initiative plays a key role in that the U.S. Census Bureau adopted the multiracial identity as a category in 2000.

A second CAAM initiative is its newly created iPhone application, “Filipino or Not?” The somewhat irreverent game portrays different public figures who may be of Filipino descent. After given clues, players are asked to determine if the person is, indeed, Filipino. Certainly, the game playfully offers a way to question assumptions about race in the media. As the game’s description states, “[o]ften Filipinos in the media are assumed to be ambiguous or of another ethnicity; with this game we want to make visible the contributions of Filipinos in a playful way.” Similar to Phil Yu’s photo exhibition of Asians and the census, “Filipino or Not?” populates the visual map by positing that diversity and ambiguity are already part of the American cultural landscape. 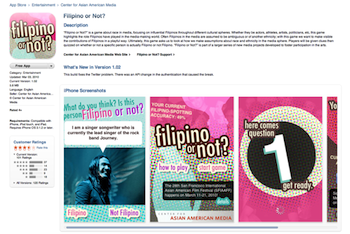 “Filipino or Not?” iPhone app

Let me conclude this column by restating my premise. Regardless of the scope of their reach, I contend that Asian American grassroots communities perform an important service; their cultural production assists in populating the American imaginary. Their use of digital media to articulate an everyday form of self-representation may not be enough to address the current anxieties of demographic change, and it may be idealistic of me to think so, but these creative media expressions do begin the process of envisioning a complex portrait that might become widespread, so that the inevitability of demographic transformation may be easier to accept. While I cannot absolutely confirm the veracity of Frank Rich’s conclusion, my hope is that if some individuals’ angry reactions are indeed based on fear of change, that these grassroots modes of expression about identity will then help us as a nation to more fully embrace the portrait of Our America that emerges from the current census.