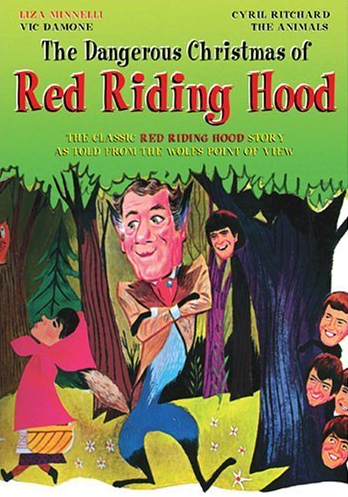 Lone T. Wolf, in his own words

In November 1965, ABC aired The Dangerous Christmas of Red Riding Hood—or Oh Wolf, Poor Wolf, a musical adaptation of “Little Red Riding Hood” tailored to the holiday season.1 Written by Bob Merrill and starring Liza Minnelli, Cyril Ritchard, Vic Damone, and the British band The Animals, the program allowed Ritchard’s wolf character, Lone T. Wolf, to tell his own side of the story. Describing himself as the victim of a “misunderstanding,” Wolf recalls “the Red Riding Hood incident” in direct address from a zoo cage likened to jail, offering ironic commentary on his innocence. “She was a cutie pie,” he recalls, saying, “No wonder the storytellers took her side.” Like Rocky and Bullwinkle’s “Fractured Fairy Tale” version, which relocated the classic Red Riding Hood narrative to a Hollywood boutique called Red’s Riding Hoods, Dangerous Christmas facetiously amplified the role of fashion in the original story. In doing so, it participated in the camp sensibility emerging within U.S. media culture in the mid-1960s. In addition, it affirmed the queer content of popular debates about camp by representing it as an “outsider” sensibility. 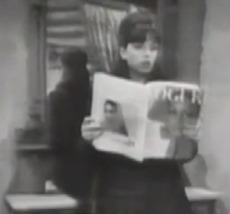 The wolf’s central role in the revision focalized issues of social ostracism and acceptance, themes that sent up popular conventions demonizing miscreant characters through gay codes like effeminacy.2 While a promotional bulletin ABC circulated in anticipation of the show noted that the young Liza Minnelli would “whet…viewers appetites,” it prioritized Cyril Ritchard’s performance. According to the agency advertising the program, this actor exemplified camp. Describing the trademark “Ritchard style, which seesaws form witty elegance to premeditated hamming,” the authors of the press release invoked terminology brought to light by Susan Sontag’s 1964 essay “Notes on Camp,” writing, “If ‘high camp’ ever goes from slang, circa 1965, into Webster’s dictionary, it will undoubtedly be followed by ‘i.e. Cyril Ritchard.’” As this announcement suggests, Ritchard does not play the typical Big Bad Wolf, but a different animal, one the copywriters identify as a “dandy wolf—or a wolf dandy.” Although he ostensibly intends to clear his name, he also dryly recognizes the futility of this endeavor. “Why did I do it?” he says, “I wanted to be noticed.”
[youtube]http://www.youtube.com/watch?v=eKcNtnr-Tvo[/youtube]

This same desire is evident in Liza Minnelli’s Little Red Riding Hood character, known here as Lillian. Picking up on unexplored details in the original story, Lillian editorializes on her love of red and reads fashion magazines. When presented a blue garment for Christmas, Lillian turns it inside out to show the bright red lining. As Lone T. puts it, she is “dressed to the teeth.” Insinuating that Lillian was asking to be eaten based on the “beauteous, exquisite” color of the garment, he asks the audience slyly, “Did you notice she had rather flashy taste?” This dialogue would seem to rehash the earlier version’s judgmental attitude toward sartorial excess, but Lone T.’s dandyism undermines the moral of the classic tale, which Dangerous Christmas characterizes as a conservative warning that women should shy away from flamboyance and refuse to cavort with strange men. Likewise, the program’s emphasis on fashion, trends, and the importance of “being noticed” plays up connections between queer culture and camp’s aesthetic concerns. As the wolf says, “It’s all about style.” 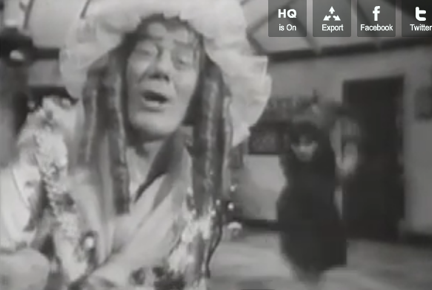 Camp emerged as a fad in the mid-1960s alongside two primary assumptions: that the sensibility was rapidly accruing converts and that its interest in style threatened social norms. In a 1965 New York Times article, for example, writer Thomas Meehan echoed Sontag’s comments on both the queerness of camp and its zeitgeist status, reporting, “In many areas of life, camp taste is becoming dominant over what is today generally accepted as good taste.” 3 He also quoted an “anti-Camp” psychiatrist who called camp “sick and decadent,” claiming camp was “not only extremely childish but also potentially dangerous to society.” Meehan’s article noted that although there were very few camp television productions, small screen phenomena like Soupy Sales’s comedy shows and the music revue Hollywood à Go Go were “in part Camp.” The Dangerous Christmas special was more than “part Camp,” and it actively participated in the debates about camp taking place at the time. 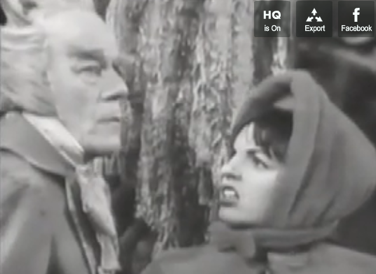 Lillian insults Lone T., who claims to be a “confirmed vegetarian,” by calling him a wolf.

In promoting a formerly suppressed point of view while excavating the erotic overtones of a fairy tale, Dangerous Christmas created an ironic story that aligned sexual deviance, social ostracism, and style from a camp perspective. As a wolf, Lone T. is considered a “miserable misfit” beyond the world of the forest, and he laments his position on society’s margins. From his point of view, Lillian’s fear of wolves is unwarranted, and he attempts to change her perception of his kind, which he figures stems from “malicious gossip.” “She’ll get over her aversion,” he sings, a line to which The Animals respond in unison, “She has cast her last aspersion.” At the same time, Lone T. articulates his position as an outcast through his disdain for the group of “longhair musicians” who play his pack, and who he refers to as “the undesirable element.” Wanting to achieve respectability, he attempts to transcend his outsider status, plotting to rise above “riff raff” like the rock ’n’ rollers with his sophisticated taste. As he explains to Lillian, “Even a country gentleman can be conscious of haute couture.” 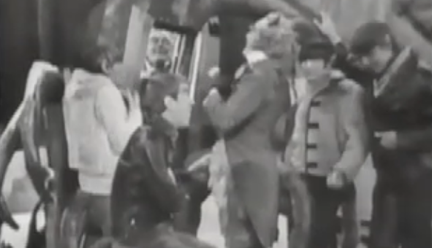 Lone T. Wolf (Cyril Ritchard) primps in a forest mirror, surrounded by the Animals, a “a groovy group” of “longhair musicians”

Through the ironic displacement of conventional masculinity, the updated fairy tale mapped issues around the rise of camp and queer culture onto a quintessentially heteronormative narrative, in which Little Red Riding Hood learns to do as she is told lest she be eaten. Dangerous Christmas emphasized the sexual metaphor of the wolf’s desire, not least through Lone T.’s comic refrain that Lillian “completely misunderstood [his] intentions.” As a “dandy wolf,” however, Ritchard’s threatening qualities are emblematized in his aesthetic sensibility rather than his attitude toward women, which is represented in contrast to the modus operandi of the wolf pack. 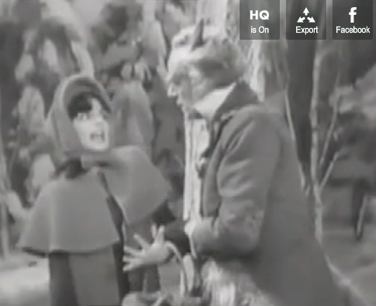 Lillian realizes that the man complimenting her riding hood is really a wolf.

Discussing his plan to become Lillian’s friend first, before devouring her, Lone T. poses the question, “Why should I eat up Red Riding Hood or harm her? / Let her get to know me better / I’m a charmer.” In doing so, he rejects the advice of Eric Burdon, lead singer of The Animals, who tells Lone T. to “just walk up and bite her.” Accusing the group of “thinking with their stomachs,” he calls them “lowbrows.” Saying that such a gauche approach would “set wolfism back twenty years,” he voices a preference for sophistication that is significantly queer. Looking disdainfully at the hungry youngsters, with their bared fangs, he announces, “There are other, more meaningful relationships, you know.” Meanwhile, the band’s musical number, “We’re Gonna Howl Tonight,” expressing a less genteel desire to “swallow the world in one big bite.” In light of the connections Dangerous Christmas drew between style, social alienation, and erotic scripts, Ritchard’s dandy wolf represented a new set of sexual mores. Declaring “a wolf with teeth for gnashing…passé and out of fashion,” the character transcended his outsider status through displaced commentary on camp as a popular trend.4 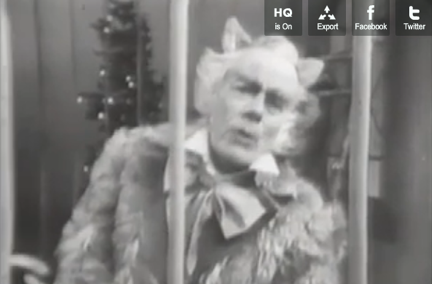 Lone T. reminisces in his cage while the other zoo animals celebrate Christmas.

As Sontag explained, camp presented an “answer to the problem: how to be a dandy in the age of mass culture.” 5 In documenting ephemeral discourse around camp as an outsider sensibility in the mid-1960s and mimicking homophobic rhetoric about its ascent to power, Dangerous Christmas offers insight into the queer practices of the television industry, which predated—and continued to coincide with—the rise of camp to mainstream recognition. Moreover, in demonstrating ABC’s active participation in producing camp pre-Batman, the show’s PR suggests that dandified forms of TV programming existed even before most media consumers received news of queer sensibilities.