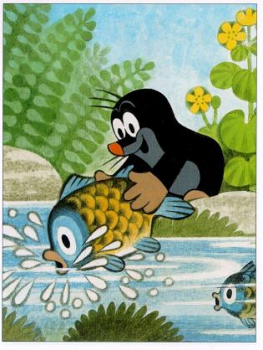 Summer is a time of outdoor fun. Kids are finally released from their ruthless school and after-school schedules, and are free to run, swim, bike and hike all day. For working parents, however, high temperatures also tend to bring high anxiety. In reality, particularly in climates where it is just too darn hot to be outside between 10 and 5, kids are released to the world of Nintendo, Nickelodeon and Disney, where every air-conditioned summer morning is Saturday morning.

At the end of yet another long summer spent in the company of Spongebob and friends, the latest explosive blockbuster superheroes, and ever-proliferating Pokémon, I’ve decided to wear my parental hat over my scholarly hat for this column and compare my children’s television use with what I knew as a child. When it comes to guiding children in the contemporary media environment, searching one’s memories often appears to be not only an inevitable exercise but often the most reliable one. I am acutely aware of the risk of comparing then and now, them and my memory of me. Therefore, I will stop short of drawing any general ethical conclusions. Instead, what follows is largely a shameless indulgence in nostalgia, whose main purpose is to incite curiosity towards an almost-extinct children’s media culture that has barely been known outside of socialist Eastern Europe.

Socialist television of the 1970s was generally boring, censored and propagandistic, apart from some ritual, much-anticipated national variety and talent shows and the occasional US or Western European imports (The Flintstones, Charlie’s Angels, Bugs Bunny) deemed safe enough for the health of socialist citizens. Until the mid-1980s, when satellite and cable began to undermine the monopoly of state broadcasters, most viewers’ choices came down to turning the TV on or off. Children’s programming, however, was largely exempt from overt ideologies, apart from a general educational purpose and aesthetic quality. The latter was guaranteed by the fact that much of regional children’s animation was produced by artists banned from “serious” adult filmmaking. Kids’ TV was all PBS, for all ages. Animated films and television series, many of which were free of dialogue, were also easy to circulated within the bloc and thus constituted a shared transnational cultural register for children growing up in different parts of the Soviet empire.

The array of beloved characters and series is dazzling. I have chosen one of the most popular and enduring shows to highlight some of the features of this lost children’s television era: Krtek. While ethnographic studies of children’s media habits in 1970s-80s communist countries are not available, I have yet to talk to an East European over five who is not familiar with Krtek, the little mole, created by Czech animator Zdenek Miler in 1956, with an uninterrupted production of episodes from 1963 to 2000. The protagonist won himself enormous popularity in most East European countries, as well as Germany, Austria, and China. “Krtek” yields over 800 hits on YouTube; and a simple Google search turns up fan sites in German, Japanese, and most East European languages. Thanks to the regional Minimax network, along with the ancillary marketing of stuffed animals, books, DVDs, posters, toys and T-shirts, one bumps into Krtek virtually everywhere in the region. 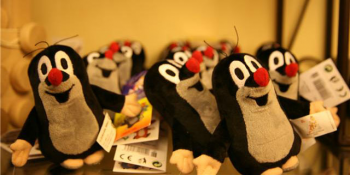 It is hard to imagine a successful animated character on American children’s screens as unspectacular as The Little Mole and his friends, Rabbit and Hedgehog. These cartoons are characteristically economical, in aesthetics and content alike. Zdenek wanted his Krtek tales to cross borders with ease. For this reason, after the first, narrated episode, in subsequent ones he eclipsed dialogue altogether, including only exclamations and other noises. The simple stop-motion, hand-drawn cartoons call for an old-fashioned spectatorial sensibility and evoke a slower, smaller, more contemplative world. The characters’ power does not come from smart talk, physical abilities, frenzied Pixar motion or simple “cuteness.” Rather, one roots for them because of their ability to survive despite the odds. Their little lives in the shadows of greater enemies, such as people and machines, are precarious. But they appreciate the smallest pleasures, taking disappointment with patience and good humor. They are not troubled by oversized ambitions, the perpetual promise of growing big or making it big. Unlike Disney or most other American cartoons, which usually single out a character as the center of identification and afford it the dominant point of view, Krtek is more of a narrative tool to deliver an allegorical message about the community.

In the first and probably most memorable episode, “Jak krtek ke kalhotkám přišel” (“How the Mole Got His Pants”) released in 1956, the Little Mole, setting the horizon of the socialist citizen’s wishes appropriately humble, yearns for overalls with big pockets. The entire forest comes to his aid, each animal lending useful skills that turn flax into fabric, which is then cut and sewn into an attractive pair of overalls. I will never forget how impressed and satisfied I felt to see Krtek parade around in his entirely home-produced clothes. The episode provides a characteristic and, in retrospect, ironic lesson in sustainability, given the zeal with which public opinion and, to some extent, policy in the United States has recently begun to urge a shift to sustainable means of production and consumption, imposing this newly-found wisdom on the newly “wasteful” Third World. 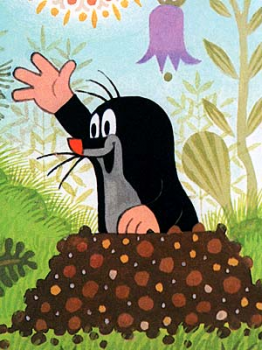 Other episodes are even more openly critical of Stalinist bureaucratic modernity and mass consumerism alike, prefiguring the current global worry about the ecological impact of mass consumerism. The episode Mole in the Dream evokes the dystopia of the loss of electricity. A man survives the winter in his snowed-in house only with the help of the unbreakable endurance and spirit of the Mole and his little friends, the real East Europeans. 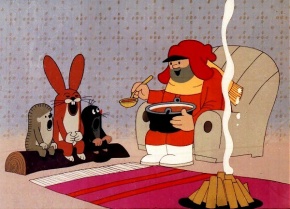 Krtek and his friends

Mole in the City foreshadows environmental disaster: It begins with an army of machines relentlessly leveling the entire forest to make room for a row of soulless, identical housing blocks. All is left is a tree stump, on which Mole, Rabbit and Hedgehog huddle together. The bureaucrats try to compensate for the animals’ loss by assigning them an inflatable forest in an office. The three friends happily settle even for this until they accidentally puncture it. Like the actual people of Eastern Europe, have to make the best of grotesquely inadequate living conditions.

The child-adult viewer of these fairy tales is expected to identify with the displaced and oppressed, small, underground animal’s point of view. Monsters – from bulldozers to bureaucrats — are represented as purely external, alien, imposed. This is different from the point of view constructed by most American post-preschool children’s programming, which actively invite identification with the powerful at the same time as they often evoke a sense of ecological horror and guilt over causing extinction – an ambivalent viewpoint inscribed into American children’s positions within the global economy.

I introduced this rumination as an innocent trip down memory lane. I realize now that it is also a memorial to the Little Mole. As such, it does imply an ethical call to remember the particular children’s culture from which he sprung, which – unlike communist health care – wasn’t so bad after all. While there is clearly no going back, it might even allow us to imagine the possibility of a children’s media economy that is not entirely consumerist and advertisement-driven.