September 20, 2009 Konrad Ng / University of Hawai'i at Mānoa One comment 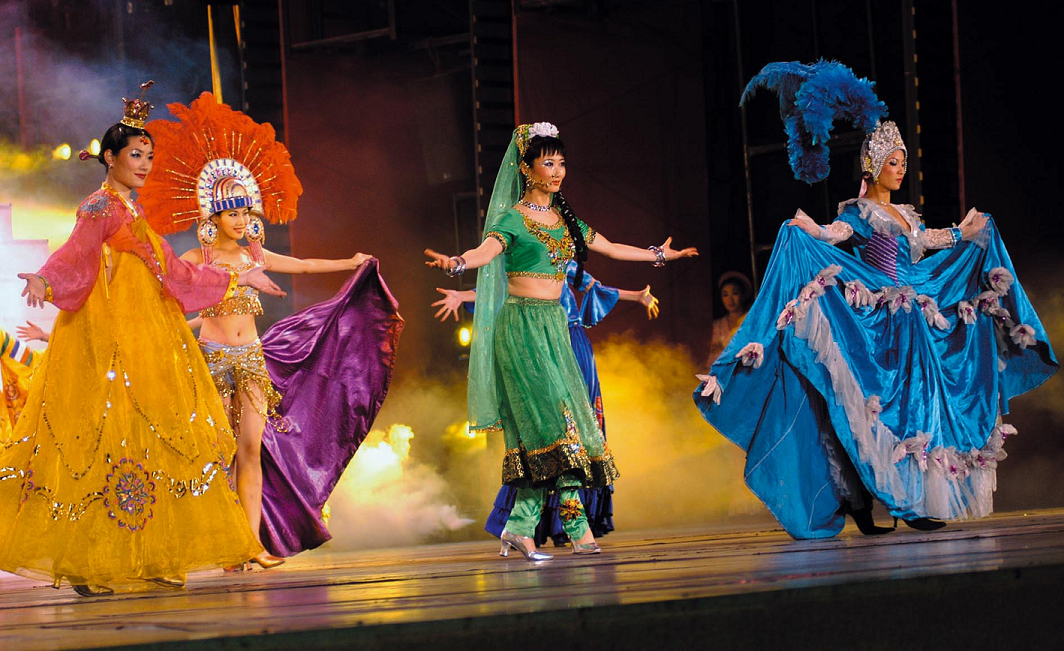 How can one use Asian cinema to help develop Asian studies teaching and learning at American institutions of higher education? What kind of film pedagogy can encourage students to understand and join the increasingly global conversations and communities at American colleges and universities? For the past five summers, I have curated the film series for the East-West Center/University of Hawai‘i Asian Studies Development Program’s (ASDP) annual Institute on Infusing East Asian Studies into the Undergraduate Curriculum. The ASDP is an initiative founded in 1990 to increase American understanding of the Asia-Pacific region through college and university faculty development. The Institute is a three-week multidisciplinary residence program that provides an opportunity for faculty and administrators to develop Asian studies teaching and learning at their respective institutions. Through a series of seminars, field trips and film screenings, the Institute explores Asian studies curriculum through the arts, geography, history, literature, philosophy, political economy, religion and social practices of China and Japan. For my part, I select, screen and discuss three contemporary films that compliment the concepts and themes explored during the Institute. With each passing year, the list of insightful Chinese and Japanese films grows longer, but the pedagogical challenges remain the same: How can one illustrate the relevance of Asian cinema in American classrooms, and how can one use film as a multidisciplinary tool of teaching? 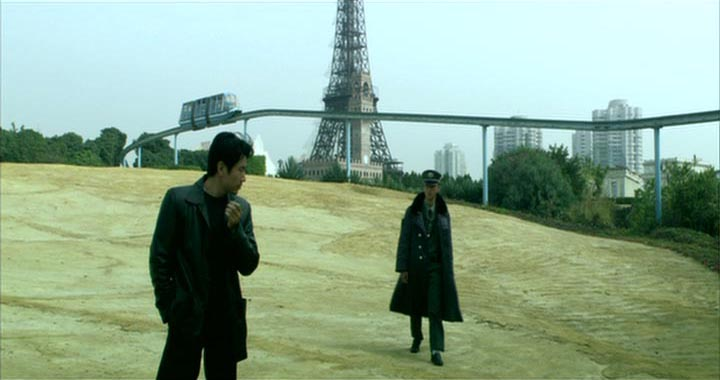 First, selected films for classroom showing must lend themselves to an analysis of the themes and story being represented as well as draw attention to the mechanics of cinematic representation – that is, how the concert of aesthetic elements such as cinematography, editing, mise-en-scène and sound compose the film’s narrative and, in so doing, exercise power over the viewer’s imagination and cinematic experience. The importance of exploring aesthetic dimensions is rooted in insights taken from apparatus theory. Derived from Marxist, semiotic, and psychoanalytic film theories that emerged during the 1970s, the general claim of apparatus theory is that cinema is ideological in the manner in which its narrative and aesthetic forms embody the time, place, industrial practice and set of cultural values from which it emerges. The suggestion that films are ideological in form and content lends itself to the belief that there must exist forms of cinematic storytelling that are ideologically “Asian.”

However, rather than adopt a strict national cinemas approach in which one identifies characteristics of a national culture and details how these traits are expressed in a film, we can learn much from the process of using film to incubate associations between concepts and experience in ways that extend beyond national contexts. That is, a film is rarely experienced as a singular and contained event; cinema resonates with objects, practices, events and trends in political and popular culture. Through the interaction of narrative, style and affectivity, film can craft compelling worlds that resemble, but not directly represent, experiences residing outside of the conceptual categories of the nation-state. Film can capture the experience of marginal or undocumented lives or perspectives of gender and class, subjectivities generally unrecognized through concepts of citizenship or national film discourse. As philosopher Gilles Deleuze states in his work on cinematic philosophy, the instructiveness of film “is not simply a question of film-content: it is cinematic-form…which is capable of revealing…higher determination of thought, choice…[and] link with the world.”1 For Deleuze, the aesthetic properties of media such as cinema, music, art and literature correspond to modes of thinking in how they affectively materialize ideas and experience. As such, the guiding question in using cinema to infuse Asian studies into American undergraduate curriculum is not what makes a film Chinese or Japanese, but what kinds of connections can be made from viewing cinematic representations of Asian life? The hope is that students will be able to encounter, acquire and develop an audiovisual language that can describe phenomena that resist the limits of national descriptions. Here, I find the work of the alternative film culture of China’s so-called 6th Generation filmmakers useful in articulating this pedagogical stance. 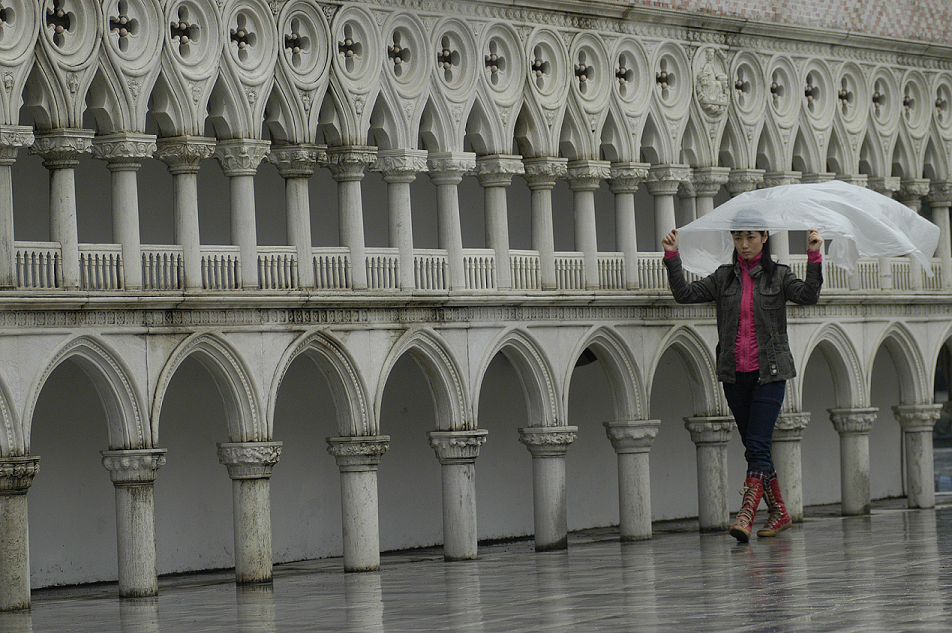 The 6th Generation filmmakers are also known as the “Urban” or “Underground” generation of because of their unsanctioned mode of production, focus on urban displacement and the contemporaneity of their films. The 6th Generation filmmakers produce gritty documentary-like films about human dislocation that provide minjian de jiyi (“unofficial memories”) of people who exist in the shadow of government drives toward reform and modernization. Few other filmmakers have come to characterize this alternative film culture or captured the dispiriting dimension of contemporary Chinese life as forcefully as Jia Zhangke. Jia’s films are known for their lingering long-takes, on-location shooting, non-professional actors, thick local dialects, ambient sound and non sequitur animated sequences to compose a dystopian Chinese imaginary. His films feature despondent characters cognizant of the ironies that inhabit their languid lives, but rather than seek change, these characters tend to be content with videos, television, music, film, bars and karaoke. Jia’s vernacular cinema is a world populated by marginal characters defined by popular culture and caught in parables without epiphany or closure. His works prompt viewers to draw associations between the story, cinematic apparatus and a viewer’s life experience. One Jia film that stands out is The World (2004). 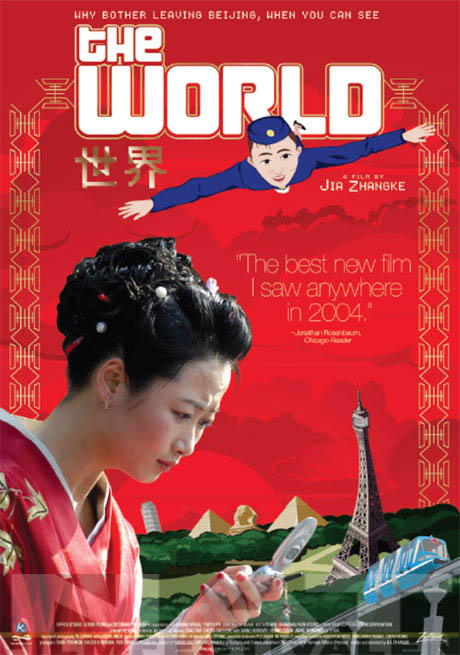 Poster for The World

The World follows the lives of young men and woman who have come from China’s rural communities to live and work at Beijing’s real-life World Park, a Las Vegas-Disney simulacra of world cultures and monuments. The film’s characters – dancers and security guards – come to the burgeoning tourist attraction in search of work and stardom only to find that World Park life falls short of its promises. Indeed, they are stuck in a place and time where the park’s slogan, “See the world without leaving Beijing!”, reveals a cruel irony about their world. Jia stages the action such that the melodrama of their lives is perpetually overshadowed by the lavish, cross-cultural performances (world cultures performed by Chinese characters) and miniatures of world icons such as the Taj Mahal, the Eiffel Tower, the Great Pyramid and the World Trade Center. Each member of the film’s ensemble cast lacks a sustained narrative arc and the film avoids privileging the story of any particular character. Characters appear and disappear from the story without any strong narrative sense of cause and effect. Throughout The World, Jia employs natural lighting, long takes, long shots, overlapping dialogue and World Park sounds to ask viewers to consider the film’s feelings of isolation, confusion and malaise. The World uses the artificial terrain of World Park to craft a reality that may be global in appearance, but is haunted by feelings of alienation and “Disneyfication”. By highlighting the impoverished lives behind the spectacle of globalization, The World presents Chinese modernity as an ambiguous achievement. 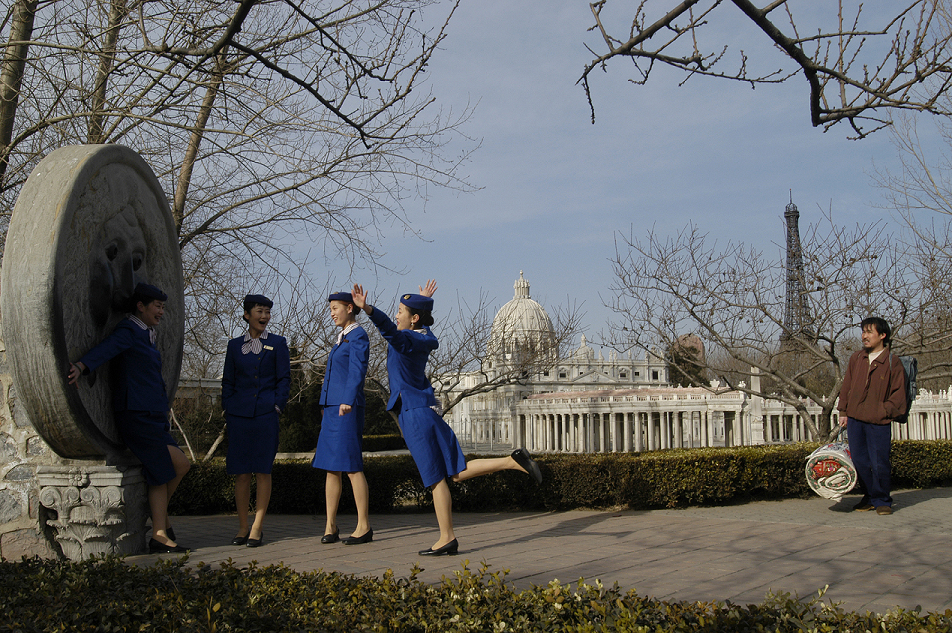 For many higher education faculty and administrators, a film’s story is the only way to gauge its educational value. The popular experience of film is heavily influenced by Hollywood cinema and its emphasis on continuity editing, seamless narratives, credible performances and tying films to their country of origin. However, I contend that a film’s educational value is linked to studying the interaction between form and content so that we can treat films as ideological works. The idea is to ask viewers to draw associations between what they see and their life experience. This pedagogical stance is one way to use cinema as a multidisciplinary tool to infuse Asian studies teaching and learning in higher education. Films by filmmakers like Jia Zhangke can show how film can be more than a vehicle of entertainment. A film like The World uses the cinematic medium to ask viewers to consider the notion that dislocation is taking place between an increasingly global world and its myriad representations. The hope of this trajectory of thinking is for students to visualize this: “the Asian experience is my experience and my experience is the Asian experience.”