“Honey, Look What I Found in the Special Features!”
Mary Celeste Kearney / University of Texas – Austin

“‘Honey, Look What I Found in the Special Features!’ or When Mad Men Pitches Women’s Lib”
Mary Celeste Kearney / University of Texas – Austin 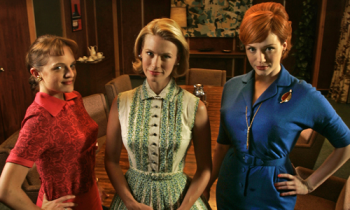 Released this past July, Mad Men’s season two DVD set gives viewers the option of watching three special features that provide some of the historical backdrop for the 1960s-based series. One is titled Birth of an Independent Woman. If you haven’t seen it yet, then you might be thinking (as I did) that this piece focuses on the character of Peggy, or Betty, or Joan.

Well, in some ways, you’re correct: Each of these characters becomes increasingly agential over season two, and Birth of an Independent Woman includes clips of their development. Nevertheless, this special feature is about much, much more than that.

The first half of Birth of an Independent Woman, “The Problem,” takes viewers back to 1950s’ America and women’s frustrations with the suburban housewife ideal, which the media industries popularized after World War II in order to free up jobs for returning veterans. 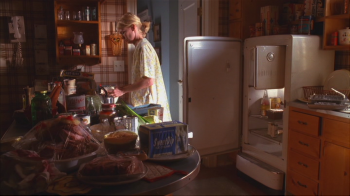 Tracing the rekindling of feminist sentiment during the 1960s, the film’s second segment, “Independence,” examines women’s marginalization in the New Left and the civil rights movement, while also exploring the social and cultural transformations that contributed to women’s increased agency and public presence during the latter half of the twentieth century.1 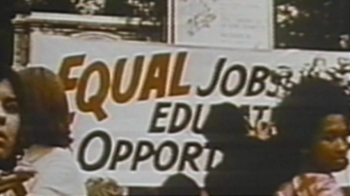 Although this history is well known to anyone who participated in or has studied the women’s liberation movement, the material presented in Birth of an Independent Woman is not part of popular knowledge about the postwar era. It’s fascinating, therefore, to consider this documentary’s possible effects on public understanding of both gender oppression and feminist activism. After all, this film is now available to all those who rent, purchase, or borrow Mad Men’s season two DVD set, a figure which will likely reach a few million globally.

If you’re as intrigued by this phenomenon as I am, then you either know something about DVDs’ typical special features, or are familiar with the dire straits of feminist documentary distribution today. In the first place, the supplemental material on DVDs for narrative TV series is usually comprised of deleted scenes, interviews with producers and cast members, or “behind the scenes” production footage. Documentaries about political movements are rarely included. Indeed, Birth of an Independent Woman may be the first.

Secondly, despite the increased popularity and commercial success of documentaries since Michael Moore’s Fahrenheit 9/11 (2004), feminist documentaries have not played much of a role in this recent trend, as their filmmakers must surmount enormous obstacles in order to get their work seen by more than a few hundred people. (Zana Briski and Ross Kauffman’s Born into Brothels [2004] is one of the very few contemporary feminist documentaries to get wide-spread theatrical distribution, though its $3.5 million in U.S. receipts is paltry compared to Fahrenheit’s $119 million.) 2

This is all to say that Birth of an Independent Woman is an extreme rarity in today’s medialand, and its inclusion in a popular television show’s DVD release upends conventional notions of not only commercial TV entertainment, but also feminist documentary. Moreover, it raises provocative questions about women’s power as mainstream media producers as well as the state of feminism among industry professionals.

According to Gilkey, the idea for Birth of an Independent Woman came from Matt Weiner, Mad Men’s creator and executive producer, who has encouraged her to develop supplemental DVD material that matches the series in terms of production quality and a focus on social issues.3 Nevertheless, Birth of an Independent Woman is clearly a Gilkey not Weiner creation, and that is largely due to the considerable agency she has as Mad Men’s DVD Content Producer. A role created by the Criterion Collection when it began to include supplemental features on its laser discs, the DVD content producer is much like a one-person crew. In addition to writing, directing, and producing DVD features, they are the primary researchers for their projects and often supervise editing also.

Gilkey, who has worked on Dr. Phil and The Tyra Banks Show, seems in an especially lucrative position today, for not only is she producing DVD content for one of the most popular U.S. television series, she is working for a show runner and production house that are paving the way for her future success in media production. Indeed, when Gilkey’s last employer laid her off in the midst of her work on Mad Men’s season two DVD, Weiner insisted that she continue as the series’ DVD Content Producer, and Lionsgate concurred. This situation allowed Gilkey to bring her Mad Men work within her own company, The Journey Film Group, which recently produced Cargo: Innocence Lost, a documentary about sex trafficking.

While Gilkey’s success as a DVD content producer says much about the potential for women’s agency in the television industry today, also intriguing is the prospect that feminist content will reach more viewers as a result of DVD special features. Indeed, the distribution of Birth of an Independent Woman may very well signal a new moment in feminist filmmaking, particularly distribution. For as feminist producer Wendy Quinn argues, “Distribution is one of the paramount factors in changing attitudes and ideas. Distribution determines who sees media, who gets to think about it, talk about it.”4 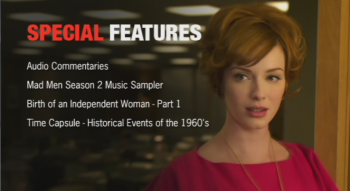 Although feminist documentaries have always served a smaller, specialized audience, with the decline of women’s film festivals since the 1980s, that audience has become even smaller. In fact, college classrooms are the primary location for feminist screenings today, and only one U.S. feminist film distributor, Women Make Movies, remains operative. As a result, feminist documentarians have increasingly looked for alternative ways to get their work seen by larger audiences. While the Web’s potential in this regard remains to be tapped, television has become a particularly desirable site, since the broadcast medium can increase by tens of thousands the average theatrical audience for a feminist film. Nevertheless, female documentarians, especially those who are feminist, have been unable to compete with the field’s male superstars, particularly Ken Burns, the first filmmaker to come to mind when “TV” and “documentary” are mentioned in the same breath.

Thus, Birth of an Independent Woman suggests new avenues for the distribution of feminist film. As a result of its inclusion in a DVD set for an extremely popular television series, this documentary about women’s lib is bound to be seen by thousands, if not millions, more viewers than if it had been distributed via the traditional channels of feminist cinema. Indeed, over 190,000 copies of Mad Men’s season two DVD set were purchased in the U.S. in the first five weeks of its release.5

Yet, it is the type of viewers who might watch Birth of an Independent Woman that is perhaps the most intriguing aspect of its mainstream distribution. Surely, not everyone who has access to Mad Men’s season two DVD set will watch its special features. And many will likely be put off by the phrase “independent woman.” At the same time, however, it is possible that many viewers who would never step foot in a women’s studies class or a feminist film festival will sit down to watch this documentary about the rise of the women’s liberation movement. And when they do, hopefully they will respond to Birth of an Independent Woman in the same way that Gilkey’s primarily male crew members did while they were making it, with surprise that they know so little about the gender politics of that period and with concern that sexism continues to limit the opportunities of most girls and women today.