The growing relationship between the Smithsonian Institution and the media has been almost impossible to ignore, especially as the many buses advertising Night at the Museum 2: Battle of the Smithsonian made their way throughout cities around the world earlier this year. While some may be disappointed that the ads are not for a reunion tour of The Village People, they might be interested to learn that the Smithsonian has, for the first time, participated in a full-length, feature film reflecting its namesake and featuring its museums. The film, a sequel to Twentieth Century Fox’s 2006 Night at the Museum, opened at number one at the box office over Memorial Day weekend with $70 million in ticket sales and has facilitated an array of synergistic cross-promotions.1 Examples include screenings of the movie in the IMAX theatres on site, content in Smithsonian magazine, a themed exhibit in the Smithsonian Castle, merchandise sales, and a video game, not to mention the inevitable increase in traffic to the museum complex for movie-related events. The resulting spectacle foreshadows more big media/Smithsonian ventures to come, but what of the Smithsonian’s commitment to public education as a mostly federally funded institution?2

Unfortunately, recent collaborations with media conglomerates have meant secret contracts, limitations for independent filmmakers and public television by extension, and the privileging of customers paying for media products. By entering into partnerships with big media, the Smithsonian has compromised its reputation and its mission, “the increase and diffusion of knowledge among men.”3

The official trailer for Night at the Museum 2: Battle of the Smithsonian

While “news” of the blockbuster hit has created quite a buzz, the Smithsonian Institution has actually been an important resource to filmmakers for a very long time, especially those creating public television programming. The institution has been invaluable for PBS and WGBH series such as Smithsonian World, American Experience, and NOVA as well as highly acclaimed documentaries by filmmakers such as Ken Burns.4 However, despite the long and fruitful partnership with public television, agreements over the past several years with for-profit media entities like Showtime Networks and Harper Collins have set the Smithsonian Institution on a new course from public interest to profit generation.

The adoption of a competitive market model at the institution was entrenched with the creation of the for-profit branch, Smithsonian Business Ventures (SBV) in 1998. SBV entered into an exclusive, secret, and controversial contract with CBS subsidiary Showtime Networks in 2006, creating Smithsonian Networks and the Smithsonian Channel. The contract stipulated limitations on the number of film and television projects permitted at the institution. Media products including more than “incidental” use of Smithsonian resources were to be curtailed in order to limit competition with the Smithsonian Channel.

It is now obvious from Night at the Museum 2, that certain kinds of film projects are welcomed, namely those producing great economic success and capable of reproducing the institution’s brand in mainstream media. Another exclusive deal, which laid the groundwork for the Showtime contract, limited distribution of Smithsonian branded books to the publisher Harper Collins. The details of both the Harper Collins and Showtime contracts were withheld from the public in order to protect “proprietary” information. It is likely that future contracts with media conglomerates will not be publically vetted, if this precedent continues.

In 2006, activists wrote letters requesting details of the Smithsonian/Showtime secret contract under the Freedom of Information Act to no avail.5 They were especially concerned with the more than “incidental” use clause. There was no clear formula for measuring such a thing, and the institution was not required to explain the criteria by which it approved or rejected film projects using its resources. Even more sinister sounding were rumors that Smithsonian Networks would have “right of first refusal” for media exceeding “incidental” use, an unprecedented practice that would pressure filmmakers to pitch their projects to Smithsonian Networks rather than alternative outlets like public television.6

The details of the contract that did emerge were galling. The Smithsonian had leased its brand to Showtime and promised to reduce competition with the new Smithsonian Channel for 10% of the take. Moreover, the audience was extremely limited.7 Full Smithsonian Channel programs are only available via iTunes, DVD, on demand, and through limited cable and satellite offerings, which can be quite costly. Distributors of the channel like DIRECTV boast that their offerings reach a “higher quality” audience, and as Joseph Turow (2006) explains, such language is generally a euphemism for high socioeconomic position or spending among customers.8

In response to the public outcry and secretive Smithsonian/Showtime arrangement, Congress cut the Smithsonian’s proposed 2007 budget by $20 million and launched an investigation by the Government Accountability Office.9 On May, 25 2006, former Smithsonian Secretary Lawrence Small, an ex-Fannie Mae executive, and several executives from SBV were called before a Congressional Oversight Hearing to testify about the secret contract. But, even Congress, like the crusading Washington Post and vocal media activists, could not penetrate the ironclad discourse of “competition.” Members of the Congressional committee were allowed to see the contract a mere two days before the hearing only after swearing to keep its “proprietary” contents secret. Years later, the federally funded investigation into the contract continues.10 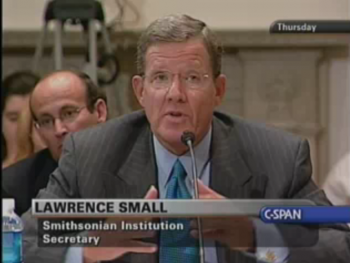 A 2006 hearing into the Smithsonian’s contract details. Full video can be found here.

The effects of the secret contract and the competitive model it entrenches are already evident, and made particularly salient by the for-profit and for-public depictions of American Indian characters now emanating from the Smithsonian Institution. In Night at the Museum 2, the character Sacajawea, a stoic mannequin come to life, has a romance with President Theodore Roosevelt, and partners with General George Armstrong Custer, both of whom were known for their beliefs in expansionism and white superiority over “savage” American Indians.11 The a-historical depictions of the iconographic characters is not surprising given Hollywood’s track record but stands in awful tension with the efforts of the Smithsonian’s own National Museum of the American Indian (NMAI) to dispel such misleading representations.12 As a point of comparison, the NMAI partnered with WGBH and PBS to create “We Shall Remain,” a much more thoughtful and historically-rooted “American Experience” series on American Indian people successfully airing this year. Each of the episodes in the series included consultation and collaboration with American Indian people/experts and several were also directed and written by Native filmmakers such as Chris Eyre (Cheyenne/Arapaho) and Dustinn Craig (White Mountain Apache/Navajo). In addition to the educational content and supplemental materials designed for use by teachers, filmmakers appeared at international film festivals and participated in talks with the public.

Although the comparison between a Hollywood film and a public television documentary might not be entirely fair, it emphasizes a major difference in orientation. The pedagogic mission demonstrated through the “We Shall Remain” project parallels that of the Smithsonian’s original charge to the “increase and diffusion of knowledge”; limiting access and audiences does not. Although some of the anxieties about access have been assuaged for the Smithsonian’s longtime partners at PBS and WGBH, the future is uncertain for independent filmmakers with less clout. As filmmaker Ken Burns and Margaret Drain, Vice President for National Programming, WGBH Public Television suggest, ambiguity about a filmmaker’s rights may lead to their avoidance of the institution and therefore less pluralistic interpretations of the collections.13 Conversely, for big filmmakers like Shawn Levy, Director/Producer of Night at the Museum 2, the proverbial path has been cleared. His ease comes with the status of being “one of the most commercially successful film directors of the past decade” as the Night at the Museum 2 website boasts.

In light of the recent change in orientation at the institution and the profit-generating lead of SBV, it is not surprising that Night at the Museum 2 would be the kind of project with which the Smithsonian would partner. The groundwork for such conditions has certainly been laid as members of Congress pointed out in the 2006 oversight hearing. However, while media oligopolies stand to benefit from the Smithsonian’s brand and control of its resources, they have no formal obligation outside of profit generation.

Appropriately, at one point in Night at the Museum 2, a pile of collections objects stolen from the institution by a nefarious villain indicates the disrespect the character has for the Smithsonian and its legacy. Perhaps this is an appropriate metaphor for the relationship media oligopolies have cultivated with the Smithsonian, creating unprecedented opportunities to pilfer the public trust. For big media, an institutional reputation forged over more than 150 years is just another trinket in its “pile of loot.” 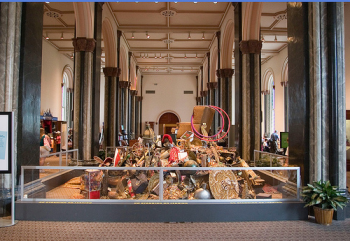 The author would like to thank Margaret Drain at WGBH in Boston and filmmaker Ken Burns for agreeing to participate in interviews with her. Additionally, she would like to thank Carl Malamud with the Center for American Progress, who pointed her to the valuable resources available through http://public.resource.org/si.edu/index.html.