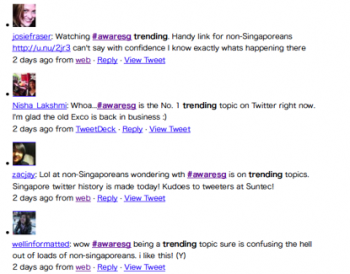 Twitterers around the world certainly sat down and shut up in bewilderment as #awaresg become one of the top trends in Twitter, surpassing even tenacious tweets about the rampant H1N1 flu virus and Hugh Jackman’s latest film, X-Men Origins: Wolverine. While most of the world was fast asleep, Singapore Twitterers were in a frenzy over local women’s organization AWARE (Association of Women for Action and Research) and their extra-ordinary general meeting (EGM) that took place in the afternoon of 2 May 2009. The meeting was instigated by what the Economist called a “bloodless coup”, staged by self-proclaimed “feminist mentor” Thio Su Mien and a group of conservative Christian women during AWARE’s annual general meeting in late March. This move was against AWARE’s alleged pro-gay agenda, supported by sex-education lessons conducted by the organization.

Interestingly enough, this turn of events prompted the old executive committee, along with 150 AWARE members to mobilize the masses via the internet, setting up not only a central website, but also and a Facebook group in order to rally women (and men, of course) to take part in the EGM. These online platforms presented pertinent information in a concise and timely manner. A Twitter account, awaresg, and trending tag #awaresg was set up simultaneously.

Contrast this to the near closed-door policy the newly elected executive committee (the “New Guard”) had with regards to media use. A press statement was only released a week after their entry into office and interviews were sparse and often criticized.1 The ousted executive committee (the “Old Guard”) instead embraced any form of media willing to promote their cause.

Twitter, a social micro-blogging site, serves as a platform for users to propagate ideas, and demonstrate social bond dynamics2, combining both social networking and blogging at the same time. The 140 character limit forces uses to summarize their posts into bite-sized pieces before disseminating these tweets to fellow Twitterers who follow their feed. Twitter’s constant-contact form of media proved to be a hit with Singaporeans, with at least 150 Singaporeans tweeting about the AWARE EGM in and out of the premises.

This was one of many firsts for Singapore’s online activists; while local activists have long lauded the use of social networking sites (SNSes) and tools like Twitter in pushing for political action3 amongst Singaporeans, it was perhaps the New Guard’s restriction of traditional media – print and television heavyweights – that forced Singapore netizens to turn to live-feeds from online commentary sites and Twitter. How then, did Twitter help establish AWARE create such a huge cyber-presence on the day of the EGM itself? This essay hopes to examine the impact Twitter had on the AWARE saga, using screen-captures from TwitterSearch and personal archiving of my tweets during the event, to show how Singaporean twitterers could not simply “shut up and sit down” about the EGM.

Firstly, local online commentary sites such as wayangparty.com and The Singapore Enquirer could not hold up against the heavy inflow of visitors accessing their sites – loading times were inordinately slow. Hence, most users were channelled into using Twitter as the other alternative real-time source. At 3:42pm (Singapore Time), I tweeted “Was trying to follow the #awaresg EGM with wayangparty.com/?p=8732 but man, not real time enough!”, which was responded to within seconds.

From a strictly personal point of view, my late entry into the #awaresg proved to be a harrowing one. Despite knowing that I could keep up with the constant stream of updates via Twitter Search, I had to refresh the page every ten seconds in order to read the latest updates. It was only until I read a tweet which highly encouraged fellow Twitterers to use Twitterfall or TweetGrid, in order to keep up with the inordinate amount of tweets streaming in within seconds. The difference was astounding. While RSS feeds required one to refresh the page in order for latest tweets to be displayed, Twitterfall in particular visually demonstrated the rate these tweets were coming in as they ‘fell’ into place. In contrast to Facebook groups and other online forums, Twitter enabled Twitterers who were interested in #awaresg to know that there were others out there who were equally engaged in the situation at the same time. The sense of immediacy was of utmost importance in establishing a sense of belonging – which hence provoked greater and more daring responses as the EGM progressed.

3:53pm, I re-tweet yet again: “RT @patlaw has the rest of the sentence: Constance Singam speaks: Where were you when women were battered and raped?”;
3:57pm : “RT @mizhalle: malay muslim woman says, “i don’t have confidence you can represent my views” #awaresg”;

It is especially important to take note of the Twitter jargon at work here. Not only do acronyms such as “RT” (re-tweeting), and identifiers such as tagging the tweet with “#awaresg” create a series of linkages across the Twittersphere, it acknowledges the existence and contribution of other Twitterers and their tweets. This multi-way communication can then be considered as a syncretisation of liminal identities and spaces. Twitterers at the event start the ball rolling with their constant updates, while Twitterers at home move the ball even further by re-posting the notifications and their responses to these notifications; building a process of creation and re-creation through interpersonal communication. This snowballing of #awaresg tagged tweets made non-Singaporeans sit up and take notice.

The EGM then, can be considered to be an example of how cyberspace’s liminality of symbolic fronts, space and place has taken over. It is notable that from the tweets tagged #awaresg, only one Twitterer visibly voiced his opinions against the happenings at the EGM – this was of course, immediately pounced upon by the vast majority who were in support of the EGM’s proceedings and the interloper was subsequently silenced. #awaresg thus, had become a common platform where Twitterers in support of the Old Guard stood their ground.

As the EGM went well past it’s designated ending time of 4pm, both the crowds at the venue and online grew rowdy. Authority was sought, at times desperately, from every possible sense, with Thio chiding the EGM attendees to “show respect to your elders”. There was no doubt that this caused a huge ruckus on site, but also online: “16:05 RT @gniliep: Thio Su Mein just said “You have no respect for the elders.” Referring to herself. #awaresg” – which spawned not only flak but also fashion. Granted that traditional media was not allowed in, and that attendees would not have been able to upload their recordings of the event till much later, Twitter presented the lightning-fast reactions of the attendees and twitterers. It is likely that incidents such as committee member Sally Ang’s outburst to “shut up and sit down!” would have been underplayed or perhaps even ignored in mainstream media if twitterers present did not reproduce the offending line, “clambering to reiterate what their friends posted.”

These ironic, and humorous maxims spread like wild-fire on the #awaresg trend, inciting Twitterer bionic__creative to create t-shirts in response to the incidents – again blurring the lines between producer and consumer. In fact, #awaresg’s prominence on the web garnered it air-time in local news programs, implicitly suggesting the reach Twitter had in disseminating timely and important information to Singaporeans. Indeed, Twitter bridged the gap where physical co-presence was determined to be impractical, rather than improbable – the outpour of tweets could not have been heard over the crowd at the EGM itself. While the same drowning out effect was present online, it was less obvious, and physically seeing one’s tweet appear on screen created the illusion that one had contributed to the EGM. This collapse of space and time thus created a liminal space for activists to move and stand up against the New Guard’s actions.

Similarly, the tweets on #awaresg had shown significant intermingling between political and pop culture phenomenon: Thio was deemed “Darth Thio” (16:04 So anyway, Darth Thio is talking about how she built the Death Star. I mean, how all-powerful she is. :\ #awaresg) for example.

If anything, the activity on Twitter via #awaresg served to solidify and perhaps even add to the growing opposition against the New Guard, which culminated in an online lynch mob of sorts on the day of the EGM itself. So, does Twitter democratize the process of social activism in Singapore? Given that in 65% of Singaporeans aged 15-49 use the Internet daily4, the demographics do suggest that a large majority of Singaporeans had access to Twitter. We can assume that a wide variety of Singaporeans from all age groups and ethnic backgrounds had access to the microblogging site and did take part in the EGM online and offline.

Alicia Tan Min Qi is currently a student at the National University of Singapore’s University Scholars Programme, where she studies English Literature and Japanese Studies.