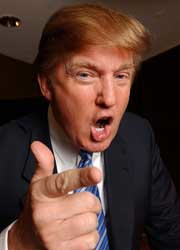 Donald Trump on The Apprentice

Together with my colleague Dr. Raymond Boyle, I have recently begun working on a two-year project researching representations of business and entrepreneurship on British television and, given the current economic climate, it seems very timely. With the fifth series of The Apprentice back on British screens (and The Celebrity Apprentice showing in the US), questions have been raised about the appropriateness of the show and its slogan ‘You’re Fired!’ during a period in which large numbers of people are struggling to keep their jobs in the real world.1 Even more problematic is the type of culture it celebrates; the cutthroat, ruthlessly competitive, ‘Winner Takes It All’ mentality that sees the BBC trailer for the series drawing on the Abba song of the same name and which has led journalist Polly Toynbee to suggest that it was exactly this type of behaviour ‘that got us into this mess in the first place’.2 Yet, the first episode of Series Five attracted record viewing figures (8.1 million viewers tuned in, securing a third of the available audience) and the rhetoric surrounding the series has focused on how it aims to reflect the credit crunch by freezing its production budget and going back to business basics. This means that rather than travelling abroad for one episode, to the exotic climes of France or Morocco, the candidates’ skills will instead be put to the test in the seaside town of Margate where they will be charged with reinvigorating the town as an attractive holiday destination.

It will be interesting to see whether this current wave of public opinion will result in a sea change in the types of representations of businesspeople and entrepreneurs found on our TV screens. After all, as recently as the 1980s, British attitudes to wealth creation and big business were mostly negative, and businessmen (as they did tend to invariably be men) were depicted primarily in drama and comedy programming as either suspect and untrustworthy or mere figures of fun.3 While British examples of this include Arthur Daley in Minder and Del Boy from Only Fools and Horses, one of the most globally recognisable from this era is, of course, J.R. Ewing from the American prime-time soap Dallas, suggesting that American attitudes were similar. Indeed, in a study by Lichter et al. analysing the portrayal of American culture in prime-time television from the 1950s to the 1980s, the authors’ found that businessmen were ‘three times more likely to be criminals than [ ] members of other occupations’ and that their crimes tended to be ‘either violent or sleazy’.4 With the dawn of the 1990s however, public attitudes to business, entrepreneurship, and wealth creation began to change, as did their respective representations on television. Although there is no room to discuss this in detail here, advances in communications technology and the dotcom boom led to a sense that anyone could start their own business (even if this was not always acted upon) and the emergence of social and creative entrepreneurship meant that ethics and profits were no longer regarded as being mutually exclusive. While news and current affairs has always engaged with the world of business, entertainment-driven television also began to understand the benefits of this area. Providing risk, jeopardy, and, more crucially, stories that viewers could relate to about the everyday decisions and pressures involved in running a business, the rise of the business entertainment format soon took hold. 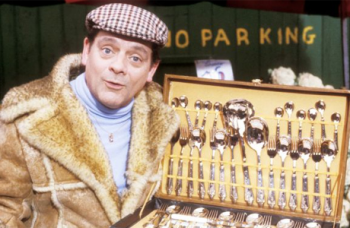 In Britain at least, this can be traced to the successful series of programmes produced in the early 1990s by Robert Thirkell at the BBC Business Unit. Troubleshooter, Trouble at the Top, Blood on the Carpet, and Back to the Floor each took a particular focus on businesses and the people who run them. While the latter (in which bosses returned to the shop floor to experience the problems besetting their workers first hand) drew on the docu-soap aesthetic that was popular at the time, it was perhaps the first of these, Troubleshooter, that has been of most influence within the industry, as shows such as Ramsay’s Kitchen Nightmares and Mary Queen of Shops follow the format of sending an expert (from the restaurant and retail trades respectively) into failing or underperforming businesses with the aim of turning them around. Yet, the business entertainment format has also diversified to quite an extent in the last decade or so. Not only has lifestyle programming been merged with business, in the manner of Property Ladder, but numerous programmes about entrepreneurship have also arisen, including Risking it All, Make Me a Million, and The Secret Millionaire. Two of the most original formats to have been developed are The Apprentice and Dragons’ Den, with the former introducing a competitive game element to the interview process and the latter involving pitching to a panel of ‘dragons’ for capital investment. 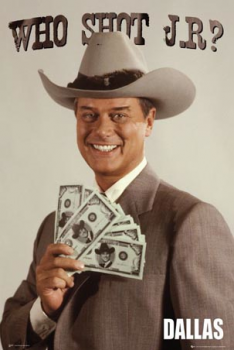 The villainous J.R. Ewing in Dallas

It remains to be seen how The Apprentice will fare in this economic climate, as although the backbiting and rampant individualism of the contestants appears to be out of step with the times, the show can also be considered primarily in entertainment terms, in which viewers are encouraged to laugh at the constant ineptitude on display (there is also perhaps a cathartic element to this in that the series reflects the kinds of inadequacies exhibited by the city bankers who Toynbee blames for getting us to where we are today and who have since, in some instances, experienced the words ‘You’re Fired!’ first hand). The focus on helping small businesses in Dragons’ Den on the other hand, is in keeping with the notion that it is innovative entrepreneurs who will help lead us out of the economic crisis. With the show’s production team descending on a support exhibition for start-up companies in Glasgow in the hope of finding potential entrepreneurs seeking investment, Ceri Rogers from New Start Scotland highlights how ‘75% of Scottish new starts have been refused funding from the banks over the past 12 months so investors like the Dragons are crucial in helping SMEs struggling to survive the economic downturn’.5 While the rhetoric surrounding the series emphasises the fact that the Den may be one of the few places left to go for funding, the logistics are that of the thousands seen at the regional auditions, only a small minority will make it onto the show and even less will secure the investment they require. Nevertheless, Dragons’ Den has the chance to offer a more positive spin on its engagement with the recession than its counterpart The Apprentice.

I want to end by briefly noting that a new area of business programming seems set to flourish in the current climate and it is that which revolves around philanthropy. Only a few short months ago in an article for Flow, I questioned the impact that the Channel 4 series The Secret Millionaire could have on society due to its focus on the eponymous millionaires rather than the ordinary people carrying out admirable work within their communities or living in poverty. While I still think the show is problematic, the latest series to be broadcast on British television appears to have come at just the right time. With news reports focusing on protestors smashing the windows of Sir Fred Goodwin’s house, due to the former Chief Executive of the Royal Bank of Scotland’s refusal to part with any of his £16 million pension (despite presiding over the bank’s collapse),6 the sight of wealthy individuals giving something back in The Secret Millionaire provides a welcome antidote to the narratives of greed dominating the press. Perhaps the last word then should go to the multi-millionaire businessman and former boss of Rover, Kevin Morley, who described the prospect of giving away a quarter of a million pounds on the show as ‘the most exciting day of my life so far’.

1. Donald Trump on The Apprentice
2. Del Boy embarks on another money-making scheme in Only Fools and Horses
3. The villainous J.R. Ewing in Dallas
4. Front Page Image