“Weekend Update” and the tradition of new journalism 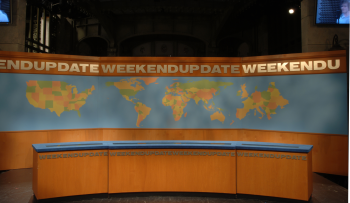 This tendency of the media not only to fail to reckon with the new realities of American society, but actually to further distort them is a major problem for an American trying to comprehend his [sic] ‘global village.’ In fact, the need to break through the media-created corporate fiction is one of the major motivations and themes of new journalistic works.1

We need to look no further than Tina Fey’s impersonation of Sarah Palin in the 2008 Presidential campaign to begin to understand the importance of Saturday Night Live (SNL) to American political culture. In the second half of NBC’s life, SNL has become one of the network’s most recognizable shows. Its contribution is especially evident when we trace out the influence of the news parody segment, “Weekend Update,” which has been skewering newscasters, political figures, and media culture generally for almost 35 years.2 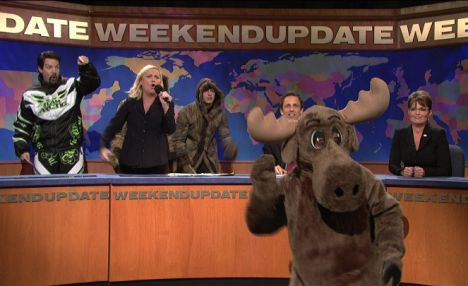 “Weekend Update,” like much of SNL, saw itself as a show talking back to the media, as “television’s antidote to television, to all the bad things–corrupt, artificial, plastic, facile–that TV entertainment had become.”3 The show sought this influence in a period of heavily publicized official corruption: it’s not a coincidence that the segment, which Chevy Chase hosted on SNL’s first show, debuted on the heels of Nixon’s resignation over Watergate and Johnson’s lies about Vietnam. These abuses of power led not only to widespread disappointment with Washington politics and politicians, but to a kind of skepticism about journalism and questions about its capacity to check political power. Hellman’s observation above reads as a pretty good paraphrase of the frustration expressed about the Bush administration by people from across the political spectrum during the post-9/11 years. What’s most surprising is that he was writing in 1981. The underlying question, then and now, was fundamental one about democratic practice and the press: how was it that the “fourth estate” had failed to expose the lies and corruption of another presidential administration?

Using a model practically invented by SNL, today’s news parodists respond to new anxieties about the failure of the media to check and balance the government.
In the past ten years, direct descendants of “Weekend Update” have gained increasing visibility and influence in American public culture, and taken “fake news” to new, if sometimes awkward places.4 In an apparent effort to appeal to younger viewers last year, CNN debuted its parody, Not Just Another Cable News Show, and around the same time, the normally stuffy and erudite Huffington Post launched an Internet news comedy site, “23/6,” which scored a viral video hit during the 2008 presidential campaign. Not all news parodists have met with success, especially when they were created by mainstream, dominant news channels: Fox News tried and failed with The 1/2 hour News Hour, and CNN’s D. L. Hughley Breaks the News lasted just a few months. The success stories tend to come from more humble origins: The Onion, whose response to 9/11 drew critical praise, is a veteran in fake news that has grown its offerings (from print to online and television) and expanded its business operation nationally in recent years. On cable, the E! Network’s quirky The Soup, in its 14th year, continues to cultivate a steady following by poking fun at celebrity news, talk shows, and reality TV. It’s worth noting that the critical and commercial successes in the genre are on cable, most obviously, Comedy Central, home of The Daily Show with Jon Stewart and The Colbert Report.

Just because everyone is doing it does not make the news parody revolutionary. What’s happened since Chevy Chase’s first “Weekend Update” segment in 1975, though, is bigger than the quantity of shows. While critics have denounced Stewart and other comics for using an “inferior” form of commentary, little has been said about the news parody’s power to make paying attention to politics something desirable and worthwhile. The appeal of news parody is not just in its cultivation of a hip, ironic “detachment;” it is that it can make politics, and caring about politics, cool.5 In this sense, it’s more like the news than we think. In fact, mainstream news shows and the parody shows use comedy in strategically similar ways.

This helps explain why ABC’s Sunday morning political talk show, This Week With George Stephanopoulos, would borrow monologues from nightly comedy shows–including Weekend Update, Stewart and Colbert–in a segment called “The Sunday Funnies.” While the title of the segment suggests that ABC is putting the comedians in their place, its use demonstrates that Stephanopoulos “gets it” and affirms the cultural cache of comedy. This “discursive integration” of news, comic, and political discourse is also apparent in The Daily Show, where the host is continually alternating between personas, from a scolding parent and voice of reason (especially in his dustups with CNN’s Crossfire and CNBC’s Mad Money), to an inquisitive student, and back to mocking, partisan, and detached.6 After the opening segments of the show, for example, Stewart interviews a guest, who is sometimes a movie star promoting a film, but very often an elected official, writer, or an expert in an area of politics. During the Bush years, an eager Stewart could often be seen leaning over his desk toward his guests during these interviews, positively aching for some kind of insight into the problems of the world. When this guest is a presidential candidate, and Jon Stewart is asking about global climate policy, he is engaged in a traditional form of talk show journalism. As Geoffrey Baym has pointed out, the discourse of news, politics, entertainment, and marketing have become almost inseparable, and this is not necessarily a bad thing.7 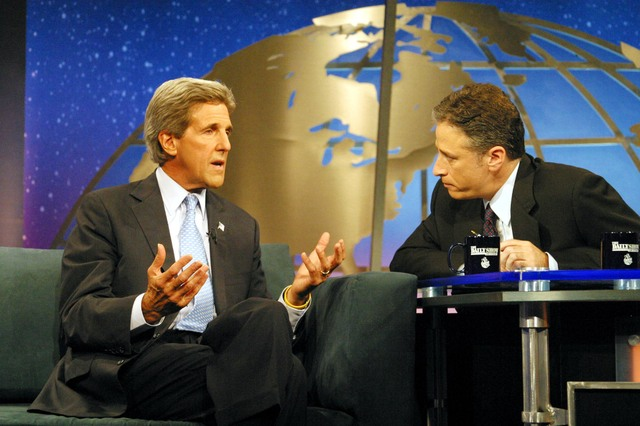 Stewart with Senator John Kerry during the 2004 Presidential campaign.

If the Watergate scandal proved that mainstream journalists were powerful and relevant, it also showed how dependent citizens are on a strong and powerful media. Television reports from Vietnam proved that Presidents could easily fool the mainstream media. That Watergate investigations or TV footage unearthed scandalous behavior only stoked more skepticism–if in this case the media “missed it,” than how much malfeasance was going undetected? Such questions created the need for a “new” journalism:

A who, what, where, when, why style of reporting could not begin to capture the anger of a black power movement or the euphoria of a Woodstock. At best it could give the external shape of such events, and even in this effort it did not possess the immediacy of television.8

The “new journalists” worked more self-consciously when they reported, employing literary devices and placing themselves in the “scenes” they wrote about. In other words, they invited attention to the act of creation of the news as they reported it, eschewing objectivity as an ideal and changing how journalism was done from the inside. They worked to “get between” us and the news in productive, if sometimes idealistic, ways. In the same way, today’s news parodists are valuable for their capacity to equip audiences “to read through and filter through, political information as it is presented” (104) and provide us an avenue of participation in a variety of public spheres. It is to this tradition, that Stewart, Colbert, and the others owe a debt of gratitude to Saturday Night Live, and to “Weekend Update.”