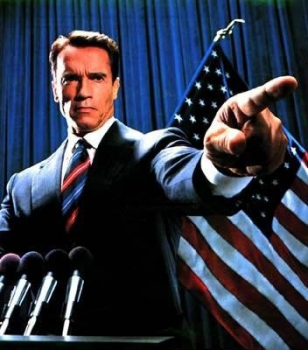 “Listen, and understand. That terminator is out there. It can’t be bargained with. It can’t be reasoned with. It doesn’t feel pity, or remorse, or fear. And it absolutely will not stop, ever, until you are dead.”

In September of 2006, California’s Governor, Arnold Schwarzenegger, signed into law a bill that promises to effectively put an end to Public Access Television as we know it. The bill (AB 2987), known as the Digital Infrastructure and Video Competition Act of 2006 (DIVCA) was the first of now several state laws across the U.S. that removes local authority with regard to negotiating cable franchise agreements, giving this authority to the state. In the case of California, franchising agreements with video service providers would fall to the Public Utilities Commission. In Indiana, the state in which I currently live, both the state House and Senate passed bills (HB 1279 and SB 245, respectively) in 2006 that follow the example set by California. Nearly 20 other states have similar legislation on the books or in progress.

Put very simply, these measures are responses to pressures from telecom companies like AT&T and Verizon who want to compete with cable operators for customers but who balk at the idea of negotiating thousands of local franchise agreements. Having states regulate video delivery systems and grant franchises would, the argument goes, streamline the franchising process, increase local competition, and (theoretically) bring prices down for consumers. It’s a classic market perspective.

An important part of local franchise agreements has typically included a provision for local public access channels, otherwise known as PEGs (Public, Education, and Government), to be included in basic cable packages. These channels are most often funded either through fees paid to the city or county which then in turn subsidize a non-profit organization to house equipment and facilities and to administer production, or by the cable operator providing these facilities, training, and equipment directly to the general public.

The potential loss of these stations raises a number of obvious (and oft-stated) concerns. The most common complaint leveled against these kinds of contractions in local authority is that they threaten the very foundation upon which a democratic polity is built: diverse and competing voices hashing it out in the pubic sphere for the common good. And from this perspective it’s all too easy to see MSOs and Telecom corporations as Terminators: hulking monsters lurking in the shadows, single-mindedly pursuing the ultimate eradication of anything resembling the public sphere – remorseless, fearless, immortal. 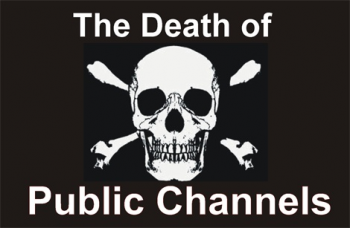 The End Is Here?

But state-level legislation has not simply usurped all local authority with regard to video delivery franchises. In fact, DIVCA contains a stipulation that local communities are still entitled to a 1% PEG fee from local providers on top of a franchise fee (the percentage is based on the annual gross revenue of the franchise). These fees are designed explicitly to safeguard the existence of pubic access programming.

So why did 11 public access stations in L.A. go dark? Two reasons, one physical, one fiscal.

First, the law relieves the cable franchises from supplying the physical studio facilities (including playback), equipment, and training to the local community: the backbone of public access. And so communities that relied on companies like Time Warner to actually supply and administer their public access facility, including playback, were left without that access as soon as it was legal for the company to shutter the facilities. The channel space itself still there, of course, but now it could be used by Time Warner for its own purposes until a reasonable claim could be made on the sustained use of that channel space (a common definition of “sustained” in this case is typically eight hours of programming each day).

A prime example of the new approach to public access can be found in my current hometown of Terre Haute, Indiana where Time Warner offers a “community access” channel that is programmed each day with a combination of advertisements for Time Warner digital services and paid programming. My own attempts to find out how a community member could access the channel have been funneled (tellingly) through the ad sales department, and my calls have thus far been left unanswered. The answer, though, is clear I think: there is no public access at Time Warner in Terre Haute without a third party organization to program and offer playback services; and Terre Haute has no such organization.

Bloomington, Indiana however, does: CATS (Community Access Television Services) which is housed in the Monroe County Public Library, and funded through a combination of local PEG and franchise fees, funds from the library itself, and underwriting grants from local businesses. And this points to the second reason that Public Access stations could go dark. While the new state franchising laws do require that PEG channels remain available on the video delivery system, in the case of California, the law creates a division between capital expenses for Public Access, which video systems are required to pay (and which pays for equipment and facilities), and the more substantial operating expenses (payroll, rent, etc), which these franchises are no longer required to pay. Without these crucial operating funds, organizations like CATS could easily find themselves hopelessly miniaturized, marginalized right off the delivery system. 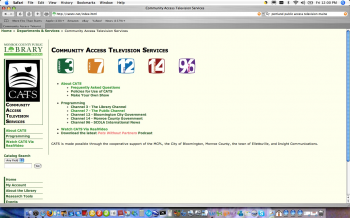 As media educators, activists, practitioners, and just plain concerned citizens, we need to focus our critical attention on the proper target. Time Warner, Comcast, AT&T, and all the other MSOs are indeed interested in terminating public access. And they are gathering up the legal strength to do it. But we can’t possibly be surprised about this. Their objective is transparent: access to the millions of dollars that could be generated for their bottom line were they to get control of this channel space. They are easy targets, but perhaps the wrong targets.

And so I offer a proposal for media educators and students to aid in the regeneration of public access television:

1. Pressure city councils (people whom we can actually access) to push back against legal loopholes that hamstring Public Access operations, and to use franchise and PEG fees for their intended purposes. 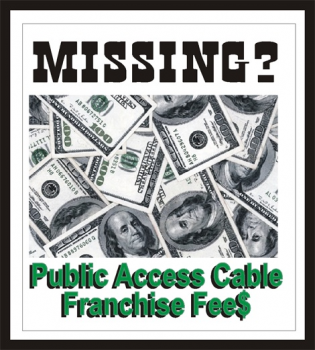 Show Me The Money!

2. Work with community organizers to strengthen and/or establish non-profit organizations to oversee public access stations that can be sustained through regular programming.

3. Encourage high schools and universities to produce quality, innovative programming for these channels. 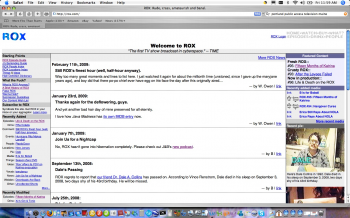 4. Train more students in video production and encourage these students to offer their services to these pubic access organizations in terms of training community members in production.

5. Extend “media literacy” education to include a more rigorous engagement with media regulation as a key component of the political economy of the media.

With an eye trained on the real targets of media reform with regard to public access, and a sustained and organized commitment to a project that most agree is worth the effort, public access television can be reconnected.

We’ll be back.
Image Credits:
1. The Governator
2. The End Is Here?