In this first installment of my contributions to Flow, I will discuss the US left-wing popularity of Arundhati Roy in relation to issues of Easterness, Westernness, and digital mediation. But allow me to confess that I feel virtually (pun intended) incapable to say anything substantial on the issue of ‘East’ and ‘West.’ Being an alleged Westerner in the alleged East for the past six years, I feel increasingly unclear about what these terms mean today. In my first weeks in Singapore, I told a Chinese friend that I thought Singapore looked Western on the surface, but seemed quite Eastern underneath. ‘Really?’ said my friend, ‘I think it looks Eastern, but is deep down actually very Western!’ My confusion has grown ever since. This confusion may tell us something about the state of digital media, globalization, and terms like ‘East’ and ‘West.’

So in light of the confused relationship between East, West, and their mediation, I want to ask a few probing questions, and suggest a preliminary interpretation. I will next discuss this interpretation in relation to a popular video of Roy on the Internet. What is the contemporary relationship between ‘East’ and ‘West,’ and how does this difference figure in the techno-logical moment under networked globalization? What dominant imagination grounds this form of mediated interaction? And how do the mediations between these categories possibly suggest a variety of border-crossings that are symptomatic of neo-liberal globalization? In short, I seek to address the ways in which the discourses and technologies of (crossing) borders, in their cultural but also in their material specificity, may reproduce or even aggravate contemporary modes of gendered, raced, and classed in- and exclusion under globalization. In line with pundits like Jean Baudrillard and Paul Virilio, I hold that such new modes of in- and exclusion today function for what I in my own work call ‘speed-elitism.’ Speed-elitism is the reproduction of the dominant discourses and technologies of acceleration, which often express themselves in a worship of emancipation, making connections, heightened mobility, and crossing borders. Under speed-elitism, the utopian emphasis on the transparent mediation through technologies of instantaneity gives rise to the fantasy of the East being the West’s radical other, as well as the fantasy of transparent dialogue between East and West. This would mean that ‘East’ and ‘West’ have become relative differences of each other under globalization: the East figures as a hallucination of radical otherness for the West. Let me illustrate this with an apparent East-West digital mesh-up: the left-wing anti-globalist video We on Arundhati Roy’s famous “Come September” speech. This video was made by an anonymous US group, and was spread free of charge through the Internet in 2007. It gathered huge popularity amongst Western left-wingers online and offline.

This video tells us a whole lot. Firstly, the whole Roy hype among left-wing Americans is actually fascinating as a phenomenon in itself. This is not to say that I do not agree with her argument, but much of what she says is common knowledge for many left-wingers outside the US. And even though I recognize that it takes courage to say some of the things she says in the US, some of her rhetoric is rather simplistic. There is for instance her crude pitching of the evil state and multinationals versus the innocent public and citizens, or her blatant romanticization of anti-globalism. Her rhetoric is in that sense very populist: a narrative of anti-statism and personal independence that is very typical of American dominant imaginary, on the left as well as on the right. There is also another element that makes her particularly interesting in terms of a Western imagination of authentic resistance: her Indianness and femininity play an important role in her popularity. After all, the left-wing West has for a long time idealized the Indian other ‘speaking truth to power,’ and I think still has in the figure of Roy. A sort of ‘hyperbolical admiration’ that is the mirror image of ‘ethnocentric scorn,’ as Jacques Derrida lucidly remarked in Of Grammatology. In a way then, Roy in her speeches cleverly performs the ‘East’ speaking truth to the ‘West.’ 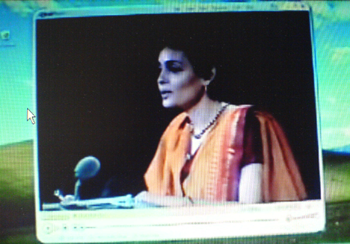 Secondly, the actual aesthetics of the video are much more interesting than the content of Roy’s speech; or, to put it differently, the enunciation of Roy as an ‘Easterner’ parallels the rhetorical strategy of the video – that is, to blame the US state and multinationals for contemporary oppressions. I am not saying that the video is wrong to do this. But one could read this video as marking the mutual enmeshment of new media technologies and war technologies – there are many self-reflexive moments in the video that point to this. Note for instance how Roy is represented in a screenshot of RealPlayer, and how these shots are juxtaposed with smart bomb- and TV war reporter-imagery. The speedy trance-like digital background music is an excellent choice in this respect: it implies that there is a connection between the pace of digital music, the speed of digital media, and the war for oil. So despite the content of the video blaming the hunger for expensive private transport and right-wing capitalism for poverty and the war on oil, it suggests on its formal level that it is digital media and their left-wing appropriation themselves – like the production and dissemination of this video – that are implicated in current wars and disenfranchisement. The alarming thing about the video is then not how wicked the right is, but that this video is indeed about ‘we’ or ‘us’  (and not simply about our governments or corporations). Our left-wing narratives and tools of resistance have themselves under speed-elitism become complicit in precisely the rhetoric and technologies of war and imperialism. This would also mean that the hallucination of Eastern otherness, in the figure of Roy mediated through RealPlayer, is structurally implicated in such imperialism.

No War for Oil

Because of the increasing encapsulation of otherness in speed-elitism, we can expect this logic of the structural implication of East-West difference to return in many varieties of digital interaction ‘between East and West.’ One could think for instance of academic ‘cross-cultural’ collaborations through new communication technologies, like those in the co-called creative industries, and in the Singapore-MIT alliance. The East-West difference today, as much as it functions as relative difference masquerading as radical difference, simply provides an excellent moment for accelerating capital. This difference then effectively no longer makes a difference to speed-elitism; or, as Slavoj Žižek would have it in a particularly witty piece in the Journal of Baudrillard Studies, Eastern art and philosophy have become a supplement to the acceleration of capital. This would also mean that the ideological center has shifted from the West or mere whiteness to a variety of privileged nodes of acceleration. What we see today is then an ostensible ambiguity: East-West border-crossing plays a role in the sustenance of the speed-elite, and as such, identity markers of ‘East’ or ‘West’ do no longer run parallel to markers of poverty or wealth within the speed-elite. We can see this new logic clearly in Singapore and India. At the same time however, these identity markers still play a major role for the lower and ‘slower’ classes, as the negative fallout of acceleration works along the ‘old’ axes of Eurocentrism. Hence, I guess, my growing confusion: in the era of hyper-mediation, concepts like East and West are extremely meaningful qua consumption, but increasingly meaningless qua the availability of alternative discourses vis-à-vis the right.

Might the recent left-wing exaltation of a ‘black’ Obama winning the US elections over ‘white’ right-winger McCain be subject to a similar logic? To be continued in my next installment…