May 22, 2008 Dante Atkins / Founder, UnitedHollywood.com 6 comments
It’s Not 1988 Anymore: The WGA Strike, the Internet and Media Decentralization
(Dante Atkins is a communications professional in Los Angeles.) 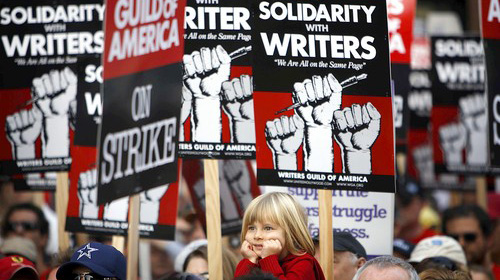 It’s amazing what a difference 19 years can make.

The last time the WGA had its writers on the picket lines–way back in 1988–Ronald Reagan was President, Die Hard was in theaters, and a Finnish college student was writing a program called Internet Relay Chat. At that point in time, I had just reached the ripe old age of six, so I was spending much more of my time watching Who Framed Roger Rabbit than I was paying attention to the seemingly interminable writers’ strike. It was only 19 years later–when I was hired by the WGA to help develop a blog that would become known as UnitedHollywood.com and assist with online media strategy–that I found out just how much the Guild’s writers had gotten the shaft 19 years prior.

The media landscape is far different today than it was 19 years ago. In the late 1980s, at what was essentially the dawn of the Internet era, major media companies not only dominated the flow of information; they were essentially the only game in town. Public relations wars could essentially be won with full-page advertisements in The New York Times, and that’s exactly how the AMPTP forced the WGA into settling for a contract that paid the guild a ridiculously low percentage of residuals from home video sales. As the writers prepared to strike in the fall of 2007, there were many fears that it would happen again.

When I walked into the WGA West headquarters for the first time a week before the latest strike was called, I was already hearing multiple complaints from strike captains about negative publicity from both traditional media sources like The Los Angeles Times, as well as more specialized trade publications such as Variety. In a situation like the WGA strike where an entire region of the country stands to lose a substantial amount of money and where ordinary people stand to lose the entertainment that gets them through the day, the onus is on the strikers to prove that they are being treated unfairly and that a strike is their only recourse. 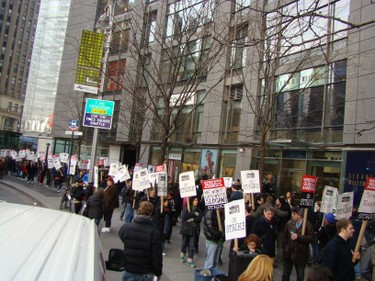 Clearly, when going up against General Electric, NewsCorp, and their allies in the AMPTP, trying to win a message war by outspending the opposition isn’t going to work. This forced the WGA to rely on new ways of getting its message out to its target audience: the people who love to watch the shows that guild members write. It was definitely true that traditional media readership was declining while the popularity of new media sources was increasing dramatically, but would that trend be strong enough to win a message war against some of the best-funded sources on the planet? The WGA strike would provide a perfect test case; we just had to implement a battle-plan.

At the strike captain meeting, we formed a communications committee headed by myself and some of the more-senior strike captains. We organized four separate subcommittees that reported directly to the communications committee: rapid response; messaging; video; and blog. The messaging committee was charged with developing talking points to counter the AMPTP’s claims; the rapid response group searched for any negative publicity and was responsible for countering it with editorials or letters to the editor; the video crew created clever YouTube videos to illustrate the talking points in a more entertaining fashion; and the blog group developed an outlet for it all—a website that took the name UnitedHollywood.com.

The name UnitedHollywood.com may have seemed like an odd choice for a website devoted to protecting the interests of the WGA, but in truth, the name fit right in with one of the principal messages the WGA captains were trying to communicate: that the fate of the WGA in these negotiations over Internet royalties would set the bar for negotiations with other Hollywood unions like the DGA and IATSE. Indeed, there is no way the strike would have any chance at succeeding without solidarity from other unions, especially the Teamsters.

In the new age of the 24-hour digital media where people are increasingly interested in getting their news straight from the source without having to wait for tomorrow’s paper, the UnitedHollywood site proved to be a compelling resource: updated several times a day at all hours by leading strike captains and prominent show writers with the latest news, thoughts, photos, anecdotes action items and especially videos (the “Why We Fight” introduction video received over 500,000 views on YouTube), UnitedHollywood quickly amassed a loyal following during the initial weeks of the strike, reaching a total of up to 50,000 hits a day or more, according to the site’s SiteMeter statistics. There was always something new: a rumor about the status of the latest negotiations; a series of YouTube videos featuring the latest celebrities who were standing with the WGA; and essays written by the writers of the most popular shows on television. The site became a combined education, advocacy and entertainment site that presented information from the WGA’s perspective.

But the site was not just effective at getting out the message that the WGA wanted its audience to hear; it was also very nimble at quickly responding to the latest developments in the messaging war. When the AMPTP insisted that the WGA writers averaged $100,000 a year and were being greedy in asking for more, UnitedHollywood was right there to counteract that claim. When the AMPTP insisted that writers were asking for an untenable doubling of DVD residuals, UnitedHollywood immediately brought out a counter-message: we get four cents on a $20 DVD, and we’re asking for 8. The same held true for Internet residuals.

The AMPTP, by contrast, had no such Internet presence–as demonstrated by their own website, amptp.org. The result was that the WGA and their allies dominated the proliferating world of Internet news. As a consequence, anyone looking for news about the WGA strike online who may have been neutral about who was to blame for the strike got nearly exclusively the WGA side of the story. The consequences of this were clear. According to a Nielsen survey about the strike, TV viewers supported the writers by a whopping 77% to 9%, with 14% neutral.

Does the WGA’s success with new media imply that such a model could work for other advocacy groups and labor disputes? It is certainly true that having some of the most talented and creative people in the world pushing the message and designing videos doesn’t hurt, especially in combination with a climate already hostile to large corporations. But what is clear is this: it doesn’t matter how deep either side’s pockets are; in a message war, ignore the Internet at your own peril.

Image Credits:
1. Solidarity with the WGA was not a given at the outset of the strike
2. WGA writers picket the Time Warner Center in New York City
3. UnitedHollywood.com’s banner