(Jennie is a screenwriter and producer working in Los Angeles, Daniel is a Doctoral Student at USC. They wrote this piece together from Jennie’s perspective.) 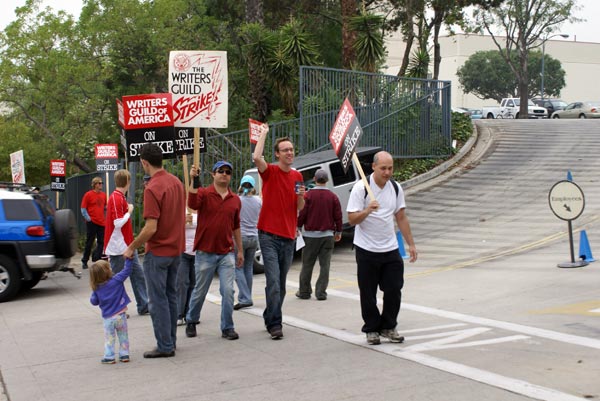 Screenwriting can be a lonely profession. Television writers spend time in tumultuous writers’ rooms, while feature film writers tend to work alone or in pairs, working from home most of the time, occasionally typing away in cafes or diners when the need for human contact becomes acute. Life for a striking screenwriter, however, is quite different.

No longer sedentary and secluded, the striking screenwriter is expected to spend a great deal of time pacing, chanting, and talking with other screenwriters. Someone estimated that we were slowly covering four miles per day; someone else figured two. An enterprising screenwriter wore a pedometer, but our pace was not sufficient to measure the distance accurately. When writers weren’t complaining about their sore feet, the focus was on the food. Forget Jay Leno’s donuts — on our line at Prospect Studios the cast of Grey’s Anatomy purchased entire coffee carts and stacks of pizza for weary picketers, overzealous agent’s assistants drove east of La Brea to pass out scones, and neighborhood supporters dropped off pies, cookies, and assorted goodies. So much for the health benefits of walking four hours each day. 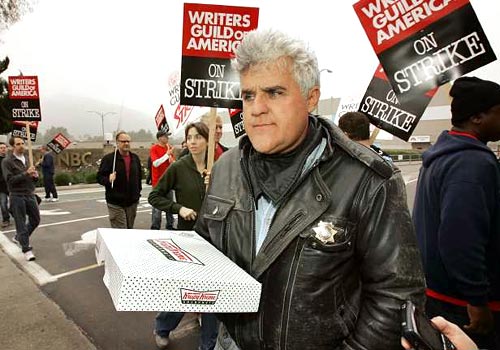 Of course, with all the chanting there was barely time to eat. My personal favorite — “We write. You wrong.”— was penned on our line by Oscar-nominated screenwriter Dan Futterman. In between all the chanting and munching, wary screenwriters got to know each other. It was easy to make conversation: instead of “how are you?” our greeting was “so what do you write?” The answer was simple: “film” or “television.” If two writers hit it off they might talk about credits, actors or producers they both knew, agents. More often than not, people talked about preschool — where their kids went, when they applied, what types of snacks the schools served. There were always a few writer couples – some picketed together, some apart. People brought their dogs. Some new friendships were made — some new couples were made — but mostly the line became our own kind of town hall meeting for writers to talk about writing and striking. 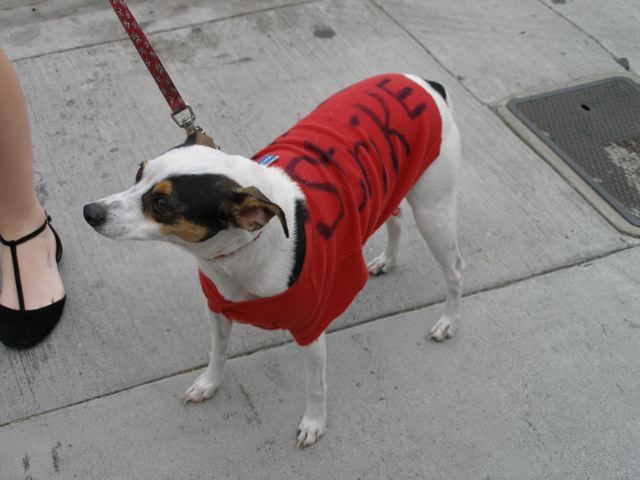 No animals were harmed in the walking of this picket line

To support my guild, I signed up to become a Contract Captain — a person who helps to organize and communicate with the ranks of writers. In charge of a group of feature writers living in the neighborhoods near my home, I had the task of informing a group of strangers that they were expected to wake up in the morning and show up every day at a scheduled time in order to walk around in circles for hours at a time. My team list arrived just a day before we started picketing. I spent hours making calls — most were wrong numbers. Of those who answered some had questions; some grumbled; some immediately agreed to come out to the line and see what it was all about; some decided to come only because they were intrigued by the idea of meeting other writers. Everyone was pleased to be picketing within walking distance of their home. On the line my team grew — I picked up writers who never got a captain, hadn’t heard from their captains, or who hadn’t heard enough. By the end I had an array of film and television writers on my “team,” some recalcitrant, some eager, most in between. We were loosely organized, with people taking shifts as they could around child care and other contingencies, most striving to fulfill their weekly guild obligation. The writers picketed the way they worked, changing location at whim. I would receive a couple of emails each morning – “I’m going to Paramount today,” or “I’m heading to Fox to see a friend.” Even with all of the comings and goings, across part-time writers and successful veterans, we were decidedly coming together, a conglomeration of personalities and ideas up against a unified corporate front.

While the picket lines became the public face of the strike, a great of deal of information-sharing went on in places both less and more visible. A couple of screenwriters, envious of the obvious connections amongst television writers, took it upon themselves to organize weekly drinks for feature writers. Organized by geography, all one had to do was show up at a bar and have the chance to rub elbows with the likes of James L. Brooks, Nancy Meyers or Mike White. Informal meetings at screenwriters’ homes were also organized so that writers could air their concerns directly to WGA board members. Here the discussions focused on strike tactics, rumors, how much money people were losing. When Larry Karaszewski learned that I had joined the guild just days before the strike, he let me know the same happened to him in 1988. Judging by his house, things turned out just fine. These gatherings served as outlets for the diversity of opinions held by a disparate constituency, all the while connecting writers who would normally have no contact with one another and consequently building a sense of community.

More official still were the captain’s meetings, where the guild’s negotiating team spoke directly of their progress. Even in this format, the tone and agenda was set as much by the writers as by the leadership or staff. One of the most telling moments came during a question and answer session in which we were asked to keep things short. A writer went on a rant instead. No one thought this tirade was an appropriate use of our time, but when he was summarily shut down, all anyone could talk about was how they should have showed him more courtesy and let him finish. The writers had a deep respect for individual voices, even if that meant damaging the projection of a united front.


“Not the Daily Show” presents “Winter of our Dissed Content”

The greatest variety of writers’ voices were heard on the Internet. The nature of the guild, and its thousands of writers, is that people will do what it takes to make their voices heard. Prominent writers appeared on NPR — both for and against the strike. John Wells disseminated emails detailing his thoughts. John August and Craig Mazin kept up-to-the minute blog discussions. United Hollywood (a collection of guild members) was formed to counter obvious falsities and biases of mainstream sources. Massive discussions were generated – betweens writers, fans, below-the-line crew, anyone with a keyboard. Mini-editorials, YouTube videos, alternative news pieces (most notably Nikke Finke’s insider Deadline Hollywood Daily blog) appeared. Unlike the AMPTP, which made its decisions behind closed doors and then paraded their sound bites through the very mainstream media they owned, the WGA membership clamored with a cacophony of voices across a variety of Internet sources. One-way communication was broken — no longer controlled by the media or the guild, but taken on by the membership.

No one was happy that we were on strike and most writers spent the majority of their time complaining, but if you talk to them now many will say that they kind of miss it. The strike may well have served the conglomerates’ purposes in giving them cover to cut costs and wrangle out of deals, but it served writers’ interests beyond any specific deal points. Months of walking, chatting, eating, and arguing brought us together, connecting people who are usually solitary. We weren’t necessarily calling the shots (most of us were simply walking in circles) but there was a sense it was our strike, and despite our differences we were all in it together.

Image Credits:
1. Some of Jennie and Daniel’s friends on strike in front of Prospect Studios
2. Jay Leno brings Krispy Kreme donuts to striking writers
3. No animals were harmed in the walking of this picket line