Becoming the Other: Multiculturalism in Joss Whedon’s Angel

Cult television series like Joss Whedon’s Angel offer veiled social commentary, depicting everyday issues as otherworldly threats. Free from the constraints of verisimilitude, the genre of the fantastic undermines the boundaries and categories structuring understanding, disguising and dramatising social conflict within a discourse of heroism and villainy. In Angel, in particular, the traditional opposition of good and evil is eroded by locating both in the same entity, the eponymous vampire with a soul played by David Boreanaz. Whedon’s cult status suggests that the characters and conflicts represented in his work tap into widespread concerns and warrant critical scrutiny. Examining how ideological messages about race, culture and power are communicated through the interplay of heroism and villainy, I argue Angel can be interpreted as a critique of xenophobia, the fear of foreigners. Through identification with characters and the challenges that they face, viewers engage with conflicts underlying an era marked by multiculturalism and globalization. 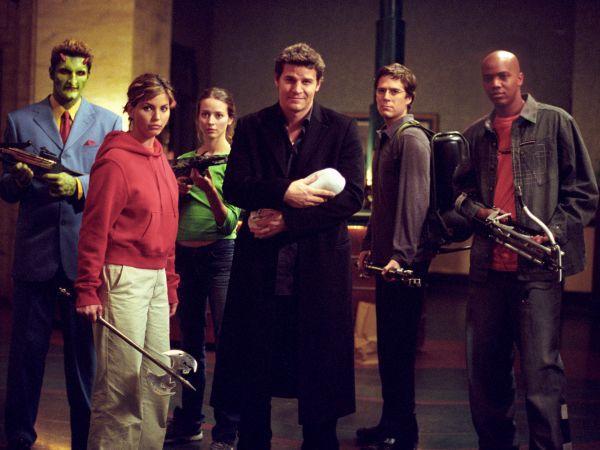 The multiethnic, multidimensional cast of Angel

The character Angel debuted in season one of Buffy as the legendary vampire Angelus whose reign of terror ended when he was cursed with a soul and, with it, a moral conscience. After leaving Sunnydale and his doomed relationship with Buffy, Angel moved to Los Angeles and established a detective agency to help the helpless.

Whereas the fictitious town of Sunnydale was situated on the Hellmouth and Buffy’s task was to protect her home from savage ‘aliens’ spilling over the border, Angel is set in an actual city located near the Mexican border. Residents of the real Los Angeles are contending with patterns of immigration altering the cultural composition of California, which is inundated with illegal immigrants. Despite providing cheap labor, immigrants are viewed with such hostility by many citizens and officials that it is not unreasonable to draw parallels with the demon population in Angel.1 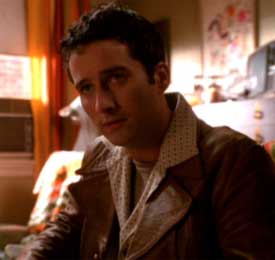 Jon Stratton has suggested that in early seasons, the “overwhelming whiteness” of the cast of Buffy was “a product of generalized white anxiety about the numerical loss of white dominance across the United States and, in particular, in California.”2 The way in which Whedon’s series deal with the influx of unwelcome foreigners can be read as a response to the intrusion of foreign cultures via immigration and globalization. Indeed, these series are products of a time when many Americans struggle with the sense that those beyond their borders are hostile and that their nation and identity must be defended. By 2003, the final season of Buffy had responded to changes in the socio-political climate and begun to embrace globalized multiculturalism: the slayer formed an alliance with multi-ethnic ‘slayerettes’ recruited from around the globe. On many levels Angel’s task involved learning to live with the demons that Buffy initially sought to slay. Contrary to what might be expected of a program that confronts the demonization of immigrants, Angel does not vilify the ‘ethnic other.’

Typically, villainy is projected onto individuals marked by signifiers of difference such as foreign accents, distorted features, dark skin, or strange customs. As the hero works to contain the threat posed by the villainous ‘other’, the narrative may project a fear of foreigners onto the villain. Hence not just evil actions are vilified, but entire communities and cultures. Angel consistently counteracts xenophobia, suggesting we all harbor aspects of the demon and the outsider as well as the potential for heroism. 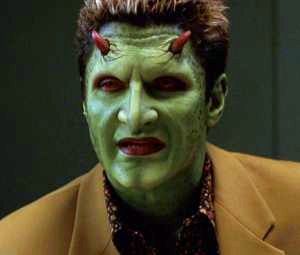 Lorne, pacifist and manager of the karaoke bar “Caritas.”

One way Angel undermines negative stereotypes is by casting persons of color in positive central roles.3 Lorne, the green Empath demon and Charles Gunn, the African American character, are the most obvious representatives of ethnic diversity, but they are far from token inclusions. Whedon confronts stigma and stereotyping in a variety of ways. Stigma can be understood as a label or mark that both signifies and creates hierarchical, oppressive social divisions. Often a physical or cultural difference accrues negative meanings and fears about purity, deviance, and the unknown, perpetuating socio-economic disadvantage and discrimination. Angel not only features a hero who is part demon, but an entire community of sympathetic, ethnically diverse characters bearing attributes usually coded as villainous. Additionally, a number of demon characters, such as Doyle and Lorne, personify honour and integrity. Doyle champions racial diversity by protecting demons of mixed descent (part human, like himself) from fascist soldier demons who attempt genocide to ensure a pure bloodline. In the season one episode “Hero,” Doyle thwarts the persecution of the ‘ethnic other,’ and sacrifices his life to save demon-human refugees.

By the end of the series virtually all the characters are at least part demon. Angel, Connor and Spike are part vampire, Cordelia is rendered part demon to cope with her skull-splitting visions, Fred becomes the indigo coloured Illyria, and Gunn gets a mystical brain upgrade, literally internalising the enemy by transforming into a corporate lawyer. In each instance hybridization is represented as empowering. The only fully human character is Wesley who, as an Englishman, is already a foreigner. Through such characterization, Angel embraces a sense that the citizens of the fictitious L.A. (like the real society it represents) must come to terms with racial mixing and cultural change. As Diana Fuss writes, “The practice of cross-identification, specifically with the struggle of oppressed social groups, becomes an urgent political imperative whenever the dominant ideology invokes a discourse of natural boundaries to categorize, regulate and patrol social identities.”4 The pleasure viewers derive from “cross-identification” via character engagement helps win consent for the program’s political message. The role of arch-enemy is ultimately displaced onto the corporate villain Wolfram and Hart and its anonymous Senior Partners. 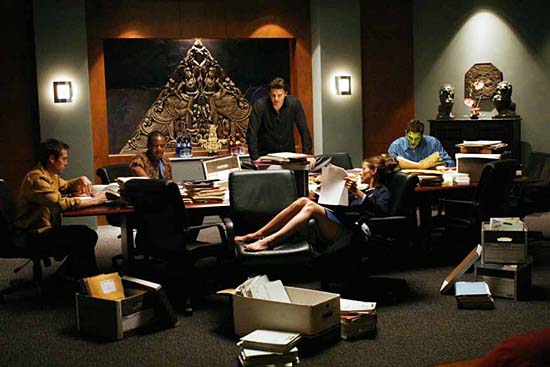 The office of Angel Investigations.

Angel questions what constitutes real villainy and offers us a hero who undermines the binary opposition of self and other, responds to changing demographics and power relations, and negotiates social and ideological conflicts. Destined to remain caught in the struggle between heroism and villainy, we leave Angel in the last episode once more bravely facing impossible odds after incurring the wrath of the Senior Partners. Angel raises his sword to slay a dragon unleashed by Wolfram and Hart, and the final credits roll.

Throughout Whedon’s work the interplay of heroism and villainy helps to structure the sphere of moral concern, delineating insiders from outsiders, and articulating socio-political concerns. While the series have ended, their legacy lives on within online fan communities, television re-runs, and DVD box sets. The issues Whedon’s series confront retain cultural currency, and continue to provide a heuristic through which viewers can engage with contemporary events.