Not Yo’ Momma’s Cyborg: Transformers Meet More Than Your Eye

Marketing campaigns, meant to enmesh our lives in cycles of desire and incompleteness are compelling experiential screenic devices/entities. They invite tactility through displays of a representation (often) of another corpo-imaginaria consuming a product or using a device in such a way as to trigger our automated response to facial gesture and locomotion styles. The advertisement references the kinesiosphere in order to situate itself as part of our everyday. Though we like to think that we have become immune to these 30 second stories, in fact, they are woven into our movement vocabulary, and often add new gestures to the palettes, sets, and drop down windows.

When the campaign evolves into hundreds of sequential 30 second spots strung together with CGI animation, tweening the breaks in choreography less a fissure erupt through the sutures, our body awareness, i.e. our corpo-reality necessarily materializes as character in the story. We become cybernectic through the manipulation of our gestures; they play back in front of us on the screen, made all the more sensorial by special effects displacing, replacing, and enticing an environment of interaction.

Considering the environment of interaction as a type of social sphere, even when projected or pixelated, gestures emerge as vital components of pre-conceptualized socialization; one driven by a physiological imperative to mobilize the human systems in space and across space, against gravity, but not much else. Our systemic misunderstandings of tone, inflection and bodily movement create the need for story, yet the foot treads marked by habitual action embed stories in the series of interlocking gestures themselves. The kinesiosphere is a way to think about the myriad subtle exchanges we have with other bodies of the external sort. Obviously we share air and water systems, but we share systems of kinemes that are organized into discreet sets across cultures and change as the body itself ages; and now, across mechanics, objects and species.

To talk of CGI animation is in many ways to speak of ILM, Industrial Light and Magic. The developer of most of the code used to digitally enhance action sequences, matte transitions, conduct/create digital animation, ILM has developed a fleet of well-trained and highly skilled animation supervisors responsible for shifting our sense of the possible. In this article, I want to explore not ILM, but the translation/transmorgificaiton of gender and race as dis-created and re-imagined through the Animation Supervisor and the gestures which he chooses to deploy and animate.

The first thing he would tell us, is that much of it is not his choice.

Working in tight formation with an army of production assistants and marketing assistants, master minds like Scott Benza (Star Wars Episode III, Harry Potter & The Sorcerer’s Stone, Pirates of the Caribbean: Dead Man’s Chest, Transformers), have to create a knowable unknown universe exciting enough to sell the product, and surprising enough to leverage as a brand vehicle. Perhaps this article is secretly about branding: gesture, race & gender.

Transformers (2007) is a rip roaring good time. I was struck by how little I groaned, or anyone else in the audience for that matter, at the blatant product placement, and the omnipresence of the Army and DOD. I actually enjoyed the awkward love interest, the greasy chic dream getting a little time, lubricated by the bond of a guy and his ride. Then I realized, duh, this is not odd: it is not that we have become immune to branding, or that we are too wrapped up in a “good story” to notice all the GM vehicles and Pepsico Products, branding has achieved its first sought after goal. We are coursing through an experiential market place like fish in water. The brand is our home. It is our mirror. It is our choreographer. The brand is the story. Without the brand, there is just simulation.

Branding has become our method of ordering, of differentiation of self from group, groups from other groups, us from them, you from me in a way that does not feel so alienating or repulsive. Dancing with the brand, living its dream, provides for cross-species interaction, not to mention death-defying females, wussy boys getting the girl and black men surviving through to the end credits. In Transformers, the brand is absolutely the story. The kinesiosphere of the cyborg as arrived, thanks to decades of Hasbro magic. 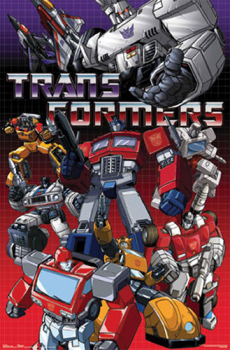 Hasbro has been around in our homes it seems like forever if you were born after 1952 when their smash hit, Mr. Potato Head®, first hit the shelves. I personally can sing the Transformers© cartoon theme song, which made me treasure every word of Donna Haraway’s “Cyborg Manifesto” when I finally grew up and went to grad school. TRANSFORMERS! ROBOTS IN DISGUISE. TRANSFORMERS! MORE THAN MEETS THE EYE! Lego® on steroids, or a redux of Hasbro’s (in)famous GI Joe® action figure, the Transformer® toy was awesome and battle ready and totally for boys. Totally for pre-soldiers. I always hated the Easy Bake oven. Why couldn’t it transform. BAKING OVEN! ROBOT IN DISGUISE! BAKING OVEN! PIE GETS IN YOUR EYES! But I digress, or head towards the point.

Hasbro, or the Hassenfeld Brothers have been branding playtime for a long time, conquering comic books and Saturday mornings alike in extremely gendered specific ways. That they have leveraged this brand with General Motors and the US Army, into a CGI-driven action film should come as no surprise. Those of us called Gen X-ers when we came out of college into coffee shops and slackerdom (which includes fan boy Scott Benza), are more succintly described as “The Hasbro Nation.” Jammed into predetermined slots of gender reality, our gestures emmanate as much from our diurnal investigations of the humans in our household as they do the animated characters on our screens. And yes, we are also the Atari Nation.

Wait! We are the Tie-In Nation! Yeah, that feels about right.

But branding did not get it right until the 21st century. Now there are parents who don’t remember not being branded. 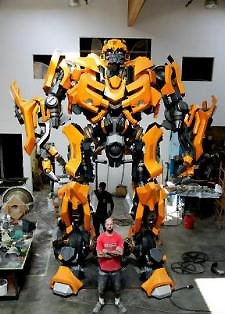 The use of larger-than life models and CGI animation in the film brings together the childhood fantasy of having the toys actually talk and do their thing for you, without you “animating” them. However, since they are brought to life, they must move in ways that we can recognize as humanoid, less they be too strange to enjoy/emulate. The gestures employed by the robots, we are told through the narration, were culled from the World Wide Web, so in effect, they are mirroring “us,” aping us, for more “effective” communication.

And yet, they are just stereotypes.

Would an alien super culture select that about us? Rhetorical, but as a vehicle for a major toy company, car company, and military regime, this film must trade in base-line gestural patterns in order to maximize audience size and leverage all of the product tie-ins. Gestural sets in this film are very subtle since the animated objects are humanoid/android. We do not have to wonder too much at the distraction of a dancing fairy tale character or cooking rat. Coupled with the color and make of the cars, the viewer is given all of the clues that they need to “race” a robot. 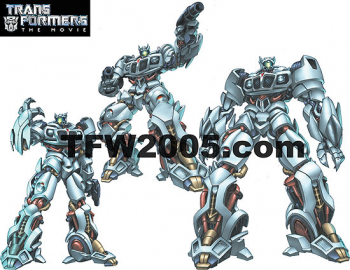 Specs for the Jazz® action figure from blogspot.com 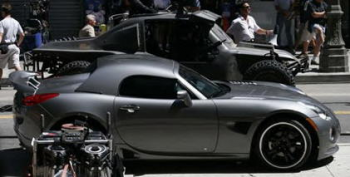 “Jazz”® as Pontiac Solstice® from blogspot.com

No hoopty, Jazz® is a modified Pontiac Solstice®, but he’s still a “real niggah” as evidenced by his seemingly uncontrollable urge to dance in the face of danger and “break verbs” in a way that reveals his complete inability to properly use Ebonics. The truly mechanized gesture, one that is itself a character in the film, is the transformation from vehicle to upright robot. What type of drop down screening happens in that transition? Does the direction in which the robot flips in order to become bipedal indicate whether it will be friendly or fire? Geek that I am, I have to imagine that the John Frazier and the guys who devoted themselves to building the physical robot for Bumble Bee® thought about these things as they conversed with the animator, Jeff Man about how to tween the rotations and foley in the clicks and whirs of gears shifting into organ-like stasis.

Both characters are voiced as male, as are all the robots. The female is located in the generator/interpretator, immobile, potent, creatrix and destroyer. Ah, and silent. What then, is the difference between the cyborg and the robot? Where is the cyborg on screen? Honestly, the soldiers, the hormonally challenged boy, the car-thieving girl, the code-breaking hot blonde and her fat funky guru are the cyborgs. Even more so, every audience member who’s ever sang that theme song in their pajamas bear the brand of the cybernetic.

4. Specs for the Jazz® action figure from blogspot.com

5. “Jazz”® as Pontiac Solstice® from blogspot.com