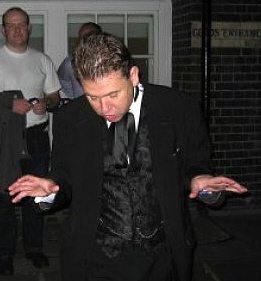 With roots in the nineteenth century, spritualism has long been a feature of the European and US landscape, bridging intimate experiences of loss and public spectacle. The sorts of personal connection and intimacies exploited by spiritualism seem in some ways quite at odds with the constitution of television as a mass medium. And yet the marked success of paranormal programming in recent years suggests a broad compatibility between the intensity of personal recognition (a lost loved one; distant family members trying to communicate, albeit for no apparent reason) and the experience of watching TV. In fact, although TV exploits interest in the paranormal and spirituality in a number of ways, the staging of personalised connection with a formerly known individual is relatively rare. Rather, it is the spectacle of communicating with the dead, whether as religious affirmation or source of ghost story shocks that predominates.

Paranormal programming has thrived on various niche channels, with Living TV's Most Haunted by far the most popular and high profile UK example to date. The team explore a series of supposedly haunted locations by day and night. Regular and guest mediums are brought in (supposedly with no foreknowledge of the location) and narrate their sense of the past and haunting presence of these locations. Titles and Yvette Fielding's voiceover provide us with historical information about the settings, enabling the audience to judge whether the mediums are getting “hits” or “misses” in their reading of their surroundings (and thus effectively placing us in a comparable position to the audience members at spiritualist meetings or live mediumship). Like Crossing Over with John Edward (Sci Fi Channel, 2000-2004), Most Haunted has been hit by accusations of fakery.1 Even so, it remains a consistent ratings success with the main series supplemented by live specials and behind the scenes extras. Medium Derek Acorah (star of series 1-6) may have been “exposed” in British newspaper The Mirror,2 but his celebrity has not noticeably waned (his post-Most Haunted endeavour, Derek Acorah's Ghost Towns, has completed a second series).

Both Acorah and Edward are celebrity mediums, charismatic figures whose persona forms a significant part of their performance. Celebrity features as an attraction in other paranormal shows too such as I'm Famous and Frightened (Living, 2004-5), a “Big Brother” variant featuring a cast of minor celebrities locked in a spooky location, facing challenges and eviction, or Dead Famous (Living, 2004–) in which “sceptic” presenter Gail Porter and “psychic” Chris Fleming search various locations for contact with deceased stage and screen celebrities.

What is perhaps most striking about Most Haunted is the show's effective presentation of the paranormal as entertainment, engaging in but also rendering redundant (at least partially) the opposition of sceptic and believer that structures much media coverage of the paranormal. This is not to say that the program is not premised on belief in the paranormal: it clearly is, despite the presence of a parapsychologist figure intent on scrutinising the team's observations and experiences. Yet as entertainment Most Haunted requires no such belief. At a formal level the show exploits horror and documentary/reality TV conventions, from the close, infrared photography and skilful editing (including multiple repetition of key moments) to the soundtrack with its atmospheric music and ambient sound, and, crucially, the performance of the cast, notably the screams of presenter and executive producer Yvette Fielding and the “possessions” experienced by Acorah (and occasionally other cast members). Even the positions of “sceptic” and “believer” are generically familiar, notably enacted in the hugely successful 1990s series The X-Files (Fox, 1993-2002).

Most Haunted functions as a hybrid mystery/reality entertainment, deploying spooky camerawork and shock effects in sensationalist style. While the show's legitimacy is certainly a question (the Mirror expose suggested that producer/presenters Fielding and Karl Beattie faked responses, noises and even pushed other crew members to evoke fear/interest), Most Haunted is unfettered by the accusations of poor taste (centred on the attempt to exploit the personal grief of audience members) that critics levelled at John Edward's show.3 The night time “vigils” and “investigations” offer the pleasure of fear and the spectacle of “possession” at several removes; repeated images of fearful faces peering in the dark, the sound of bleeps signalling the jumpiness of Fielding et al (“what the **** was that?” she cries with regularity) are all now familiar markers of mystery. 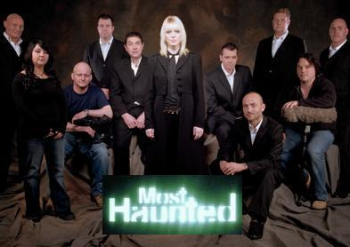 Cast of Most Haunted


Television's paranormal programming crosses a variety of genres, encompassing documentary, reality, talk-shows, travel and crime formats as well as the more immediately receptive generic sites of mystery and science-fiction. That Most Haunted has played on the Travel Channel in the US indicates how effectively it employs its historic and atmospheric locations, for instance. Other paranormal shows link the sort of ghoulish fascination with crime evident in Most Haunted (murder is a particular focus, unsurprisingly) with procedural variants
of crime TV. Hence the New Zealand production Sensing Murder (2006) in which psychics and private investigators work on unsolved crimes.

We can note a further generic connection between the paranormal and crime in highly produced US dramas such as Tru Calling (Fox, 2003-4), Medium (NBC, 2005–) and Ghost Whisperer (CBS, 2005–). These last all centre on strong female leads who speak to the dead (the CBS series Joan of Arcadia [2003-5] has its youthful protagonist speak to God). Indeed I'm tempted to speculate that paranormal programming is founded on the female audience (scheduling, sponsorship and casting underline the centrality of the female demographic), but this seems
altogether too reductive. Gender is certainly an issue however, with a number of paranormal shows both targeting women and exploiting longstanding associations between femininity and spirituality (a series like Charmed [WB, 1998-2006] does this in a very different way, as several feminist critics have noted4).

The young women of Medium or Ghost Whisperer define themselves in traditionally feminine terms of their relationship to others (mother, wife) and as participants within a male-oriented setting or genre (crime TV). Such strategies are reminiscent of many other female-oriented crime/investigative fictions such as Close to Home, discussed recently in Flow5. In contrast to the male celebrity mediums of reality TV (Edward, Acorah), these dramas emphasise the connected ordinariness of women as mediums or as acutely (uncannily) intuitive figures. The “tabloid knowledge”6 which suggests a particular connection between women and the paranormal is comically explicit in the shortlived Canadian show The Girly Ghosthunters (2004) in which the team's spiritualist/program making “skills” (“spirit summoner Nicole, photographer Corrie, spirit communicator Dana and history aficionado Jen”) and teenage laughter compete for dominance. The show's website invokes Buffy and Scooby Doo (a show which still manages to scare my kids senseless), describing the series as “a campy, entertaining romp on a genre that often portrays girls as weak and scared.”7 In this context, Yvette Fielding's contradictory command (as executive producer and confrontational presenter of Most Haunted) and hysteria (perpetually and comically terrified at the slightest sound on location) seems as telling as the shows (highly lucrative) unexplained phenomena.

2. Cast of Most Haunted