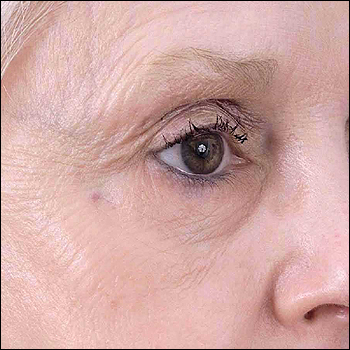 I’m feeling my age these days. My toddler’s been wrestling with a cold for weeks, setting off a seemingly endless cycle of sick boy, sick dad, sick mom, as we tag team viruses with the 20+ other wee ones in our preschool set. And the semester’s just kicked in, amping daily life up to full-frantic pace, with seminar prep, admission cycles, budget planning (a perk of life as division chair), and another turn on the committees-of-the-week ride. And then there’s the email. Always the email. Ironically, I’m teaching a grad course this spring on fashion, beauty, and media culture. Can’t say I’m feeling all that expert on such topics right now. I’m lucky to shower these days.

So, I have to confess that the chance to ‘look ten years younger’ in ten days has its appeal. That’s the promise hawked by one of the seemingly countless ‘makeover’ shows dotting the televisual landscape today, the appropriately-titled 10 Years Younger on TLC. Avoiding the nip + tuck techniques of The Swan or other surgically-enhanced shows, this kinder, gentler series promises a non-invasive path to a renewed and youthful self.

But, just as I’m getting lured in, ready to submit my own application online, something (besides standing in mid L.A. in a big glass box while passing strangers guess my age) gives me pause. I already work a lot, with my job bleeding into domestic space via email, phone line, and fax. Even my TV watching is pretty much always tied to work, particularly this past fall while I was serving as a juror for the AFI television awards. While life in the university has probably always made separating work and play difficult, the technological landscape of post-fordism makes the blur feel complete. I’m going to resist the TV’s siren call to add working on myself to the equation and instead ponder why transformation has become such a powerful media lure today.

Of course, the promise of transformation via the commodity is not strictly a 21st century phenomenon. Media culture has been tightly tied to beauty culture since the birth of advertising, and it’s hard to think the history of Hollywood without recognizing the role the silver screen played in perpetuating precise ideas of glamour and fashion. Certainly, the proliferation of screens across the late 20th century – from televisions to computers to new mobile devices – participates in and extends these legacies and logics. 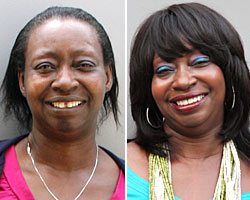 Vanessa before and after on 10 Years Younger

But today’s makeovers are different too, and these differences matter. As Heather Hendershot recently noted in an article for Flow, today’s promises of transformation frequently penetrate the body, sculpting flesh and figuring it as increasingly mutable, changeable, and porous. The ‘transformations’ featured on shows ranging from Extreme Makeover to Plastic Surgery Beverly Hills (and on their attendant websites) highlight malleability to a new degree. Sure, specific products – from Botox to DaVinci veneers – are featured and made familiar. But this is about more than just selling procedures and pharmaceuticals.

Bodies become one with the bitstream, as easily morphed as a Photoshop file. Beauty is no longer a surface phenomenon, with the exterior reworked to match a ‘beautiful’ interior through a careful consumption of products. The inside and outside now collapse and blur, all up for reconfiguring and all requiring hard work. Thus the focus on many of these series on process itself; while the ‘reveal’ is still important, the shows narrate the labor involved in transformation in a manner quite different from earlier makeover tales. The ‘before’ and ‘after’ are still key, but the in-between expands.

New technologies of vision help underwrite the collapse of inside and out, making visible the interior of the body in new ways, but such a collapse is not just the effect of new representations on the surface of our screens. Rather, the very forms of electronic culture (and, especially, of digital culture) help naturalize this process, shifting our understandings of what constitutes the self and working in tight feedback loops with shifting modes of economic production and emergent media ecologies.

Various theorists and economists have noted a shift in the workings of capital, beginning in the 1960s and accelerating through the past several decades, a shift marked by a turn from factory production models toward an information economy. Western economies have moved toward flexible patterns of production, economies of scope (small batch production of a wide variety of products), service and knowledge industries in which computerization figures as a major development, and a new priority on consumption that targets highly differentiated niche markets.

A key factor in this shift to post-fordism is the emergence of data processing in which workers and machines are figured as equal relays in electronic circuits of information. Computers, moreover, contribute to a temporal and spatial decentralization of work that involves the overflow of labor beyond the eight-hour day or the confines of the office. There’s a space-time compression in which the boundaries between labor and leisure, work and home, bleed together. The internet in many ways crystallizes this shift, making it manifest, as work follows us home and shopping follows us to work.

The recent explosion in transformation TV situates television firmly within electronic culture, narrating recombination across our very bodies and homes, underwriting a continuum that runs from the extreme surgery shows to the seemingly tamer worlds of What Not To Wear and Trading Spaces. Electronic forms are complexly situated within the workings of capital. Thus, the bleed between product and information, between work and leisure, between old and new bodies can be seen as skilling us for the new modes of living demanded by post-fordist economies, modes that require a new relationship to our very corporeal selves.

2. Two images of same woman: Vanessa’s before and after on 10 Years Younger