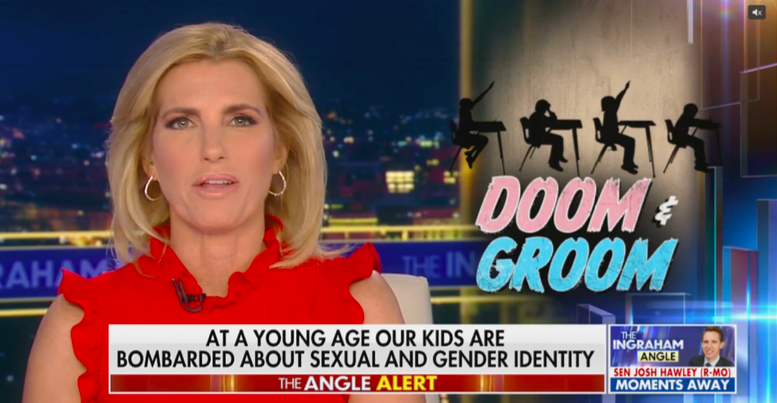 As a media studies scholar, I have been closely examining issues of trans visibility and trans representation for over a decade. I vividly recall TIME magazine’s declaration of a “transgender tipping point” in 2014, which supposedly ushered in a civil breakthrough, and a new sense of belonging and inclusion for trans folks into the larger American fabric. However, this increased visibility, as I explored at length in my first book project Terrorizing Gender (2019), has also been accompanied by a conservative backlash, which has subjected trans communities, especially those of color, to increased violence, discrimination, and harm.

Fast forward to 2022 and trans people in the United States have been experiencing unprecedented political efforts to restrict their rights and participation in public life. This year alone, over 150 bills have been introduced across the country with the aim of restricting trans people’s – especially trans youth’s – ability to play sports, use bathrooms, and/or receive gender- affirming health care. Currently, 18 states have successfully enacted such anti-trans legislation (for the latest numbers and legislative tracking see Freedom for All Americans).

So how did we get from the celebratory “trans tipping point” to here? In a larger project I am currently working on, I interrogate the role that right-wing and white-nationalist media have been playing in fueling anti-trans animus, specifically through spreading deliberate misinformation about trans people and fear-mongering on their various platforms. An illustrative example of this was the intense media scrutiny surrounding the success of Lia Thomas, a University of Pennsylvania college swimmer who became the first trans athlete to win a NCAA Division I national championship title in the 500-yard freestyle in March 2022. 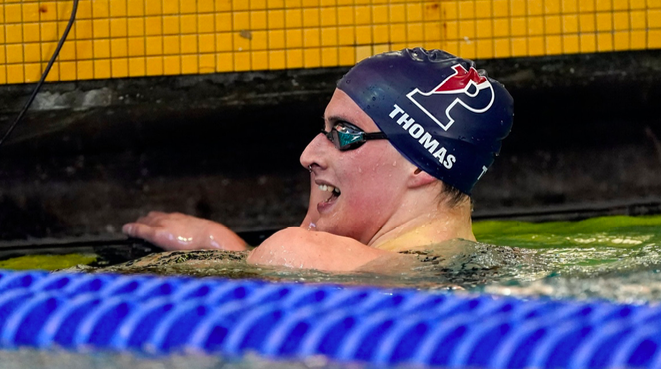 Various right-wing to far-right, pro-Trumpian publications, such as Newsmax, Breitbart, and The Federalist, all of which are known for controversial reporting, the spread of conspiracy theories, and attacks on what they deem “biased liberal media,” began paying attention to Thomas’ performance in swim meets leading up to the championship. Articles in The Federalist, for example, consistently, deadnamed and misgendered Thomas and alleged that she was part of a broader campaign by an unnamed “trans lobby” which wants to “subjugate women and girls” by erasing them: “We are supposed to pretend that a hulking man is a woman, and that it is a sign of moral progress when he [sic] beats female athletes in the pool and exposes his penis and testicles to them in the locker room” (Blake, 2022). Blake here invokes and taps into longstanding stereotypes that associate LGBTQ+ communities with sexual predation and pedophilia and specifically frame trans women as fraudulent tricksters who are “really men” and just “masquerade” as women in order to “infiltrate” and “prey on” cis women’s and girls’ spaces. This ad below from the conservative Child Protection League deployed similar fear tactics back in 2014. 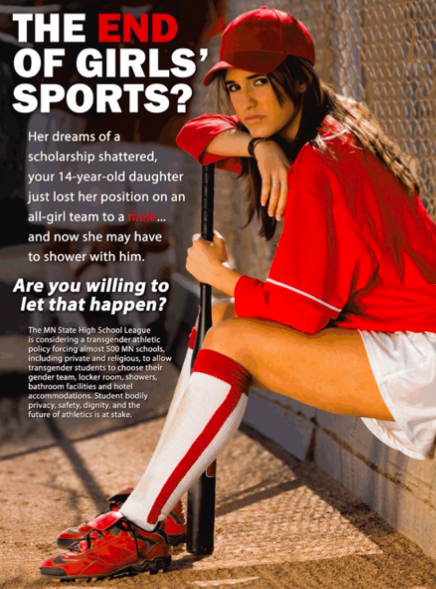 Between March 16 and April 6, 2022, conservative cable news channel Fox News aired a staggering 170 segments discussing trans people (Paterson, 2022). This three-week period included Thomas’ winning the NCAA championship title and Florida Gov. Ron DeSantis’ signing of a “Parental Rights Education” bill, commonly dubbed the “Don’t Say Gay” bill, which prohibits classroom discussion of sexual orientation or gender identity in the state’s primary schools. In a powerful display of agenda setting theory (McCombs & Shaw, 1972), Fox News anchors, hosts, and guests repeatedly deadnamed, spread misinformation, and fear-mongered about trans people, especially by promoting grooming claims, which – falsely – allege that LGBTQ+ adults are sexualizing and “recruiting” children into queer- and transness. For example, in a segment on her show titled “Doom & Groom,” host Laura Ingraham claimed that students were subject to “sexual influence paddling” in schools and Tucker Carlson similarly asserted on his top-rated show that “most of them have been led to where they are by adult predators.” Appearing as a guest on The Ingraham Angle to discuss Thomas, right-wing political commentator and author, Matthew Walsh, specifically blamed “the left” for waging war on “women’s privacy and safety – their very identities are being appropriated.”

From these rightwing media platforms, this inflammatory rhetoric has since also surfaced in various statehouses as legislators have been introducing and debating various anti-trans bills. Pennsylvania State Rep. Barbara Gleim (2022), co-sponsoring one of these bills in her state in March 2022, for example, exclaimed: “women lose out on having a fair playing field when forced to compete against biological men … just look at Lia Thomas, a biological male who competed on the UPenn men’s swim team for three years before switching to the women’s team and smashing women’s records.” This statement firmly asserts a gender binary between “women” and “biological males” and assumes that “male biological sex” is the decisive, superior factor for determining athletic capabilities. This view, however, ignores other factors influencing athletic performance, such as biogenetic variations, nutrition, or access to training facilitates, and basic medical transitioning processes (see Karkazis & Jordan-Young, 2019; Fischer & McClearen, 2020). In a transphobic political campaign ad vying for her state’s senate seat, Missouri Congresswoman Vicky Hartzler (R), further violently deadnamed and denied the legitimacy of Thomas’ trans identity: “Meet William Thomas [sic], ranked No. 462 in men’s swimming. Meet Lia Thomas, ranked No. 1 in women’s swimming. Only one problem — it’s the same person.” She further asserted, “women’s sports are for women, not men pretending to be women” (cited in Allison, 2022).

Despite these repeated claims by rightwing media and some legislators, not a single case is known where a male athlete pretended to be a woman in order to compete in the women’s category to “steal victories” (Pieper, 2016). In their arguments, legislators and proponents of these bills also tend to ignore or conflate important competitive distinctions between elite, professional sports and youth scholastic or intramural leagues. Trans people and more specifically trans athletes comprise a very small number of the general population – exact data does not exist, one estimate suggests only 0.44% high school athletes are transgender and only about 33 trans athletes have competed at the college level in the U.S. in the past decade. No trans athlete at the high school or collegiate level has single-handedly dominated an entire sport. Thomas, for example, did not win every single race during her final year and only placed fifth and eighth in the 200 and 100 freestyle championship races. The claim that trans women’s inclusion in women’s sports allegedly threatens women’s sports as a whole, thus, does not hold and is unsubstantiated. 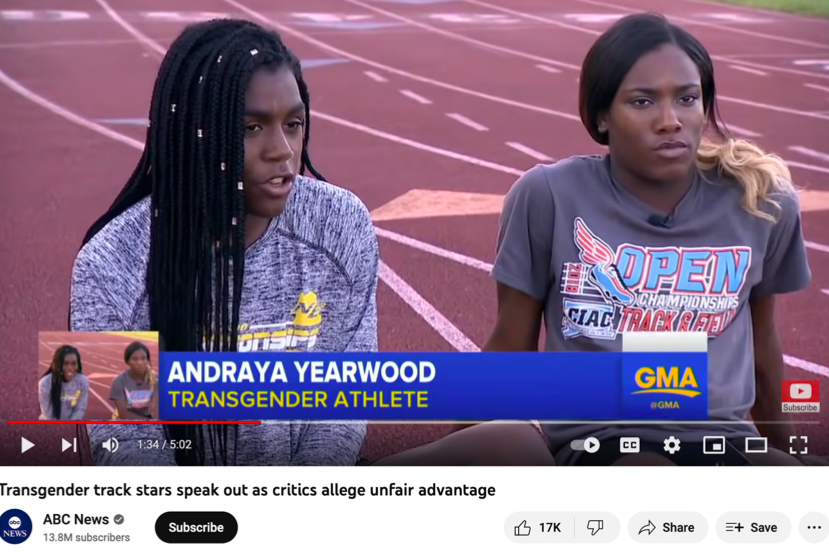 These sensationalizing and dehumanizing views have also traveled into mainstream media spaces. Representatives of the conservative Christian advocacy group, Alliance Defending Freedom (ADF), which has been labelled an anti-LGBTQ hate-group by the Southern Poverty Law Center and has been a key policy driver behind current attacks on trans rights, are frequently quoted in mainstream publications, such as ESPN and NPR. The latter, for example, quotes ADF legal counsel Christiana Holcomb at length – “It only takes one biological male competing in women’s sports to take the state championship title [ ] It only takes three to knock women off the podium altogether” (Block, 2021) – without asking her to provide evidence and context for this claim. In my interviews with journalists who are covering anti-trans legislation and who are working at leading sports and news publications, several commented on being specifically asked to include not just “the other side” but the most extreme version thereof. Kai* (pseudonym) who works for the news division of one of the original major broadcasting companies, for example, noted:

I’ll write a story, it will center a lot of the perspectives of experts, medical doctors, researchers … and so I always find that even when I include people like that, for some reason, even though [this] approach is considered very middle of the road, my editor will be like “this, isn’t the other side. We need people who use phrases like ‘biological women,’ and that talk about people’s quote ‘inherent advantages,’ regardless of whether that person is a medical doctor.” And so I definitely find that I am pushed almost every time I write a story about trans people to include, not just the other side, but the most extreme voices of the other side; which I think is sometimes really unfortunate because I don’t think that accurately represents what the issue actually looks like. (interviewed by author, March 29, 2022)

As I seek to illustrate in my larger project, this attachment to journalistic neutrality and commitments to “both-sideism” that many mainstream news organizations are beholden to de facto function within our current socio-political climate to give a platform to, uplift, and mainstream far-right anti-trans sentiments, hatred, and bigotry. Such extreme positions and views are thereby purportedly equal to scientific and factual evidence. As Kai further observes: “Too often when it comes to issues related to trans people, the media – instead of giving the voices of people who are affected – wants to give the voices of everyone who has the strongest opinion on the matter” (interviewed by author, March 29, 2022). 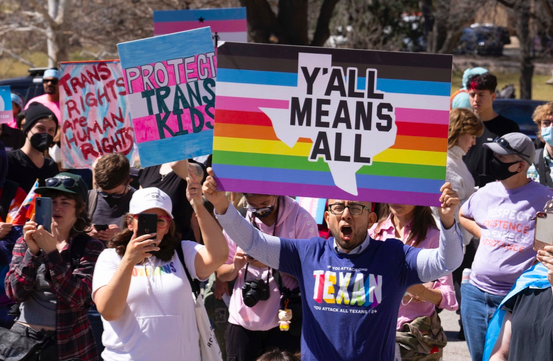 Reflecting on her graduation from UPenn and the end of her collegiate swimming career, Lia Thomas recently expressed in an interview: “The biggest misconception, I think, is the reason I transitioned. People will say, ‘Oh, she just transitioned so she would have an advantage, so she could win.’ I transitioned to be happy, to be true to myself” (cited in Barnes, 2022). Much of the hateful rhetoric referenced above never considers trans people’s very humanity. It is also noteworthy that unlike with marriage equality efforts in the mid 2010s, large segments of the liberal left and progressive spectrum as well as major corporations have remained notably silent about the current onslaught of anti-trans legislation. Similarly, the lack of allyship and advocacy from within the mainstream LGBTQ movement reflects a longer history of assimilatory LGB(T) politics which fail those community members who are most marginalized and vulnerable, in this case trans youth (Fischer forthcoming). It is therefore crucial to trace and analyze how anti-trans rhetoric initially deployed by anti-LGBTQ Christian conservative actors in fringe right-wing media spaces is becoming increasingly part of the political and cultural mainstream. In so doing, we can debunk misinformation, fear-mongering, and, in turn, mobilize support for protecting the lives and rights of trans folks, especially trans youth.