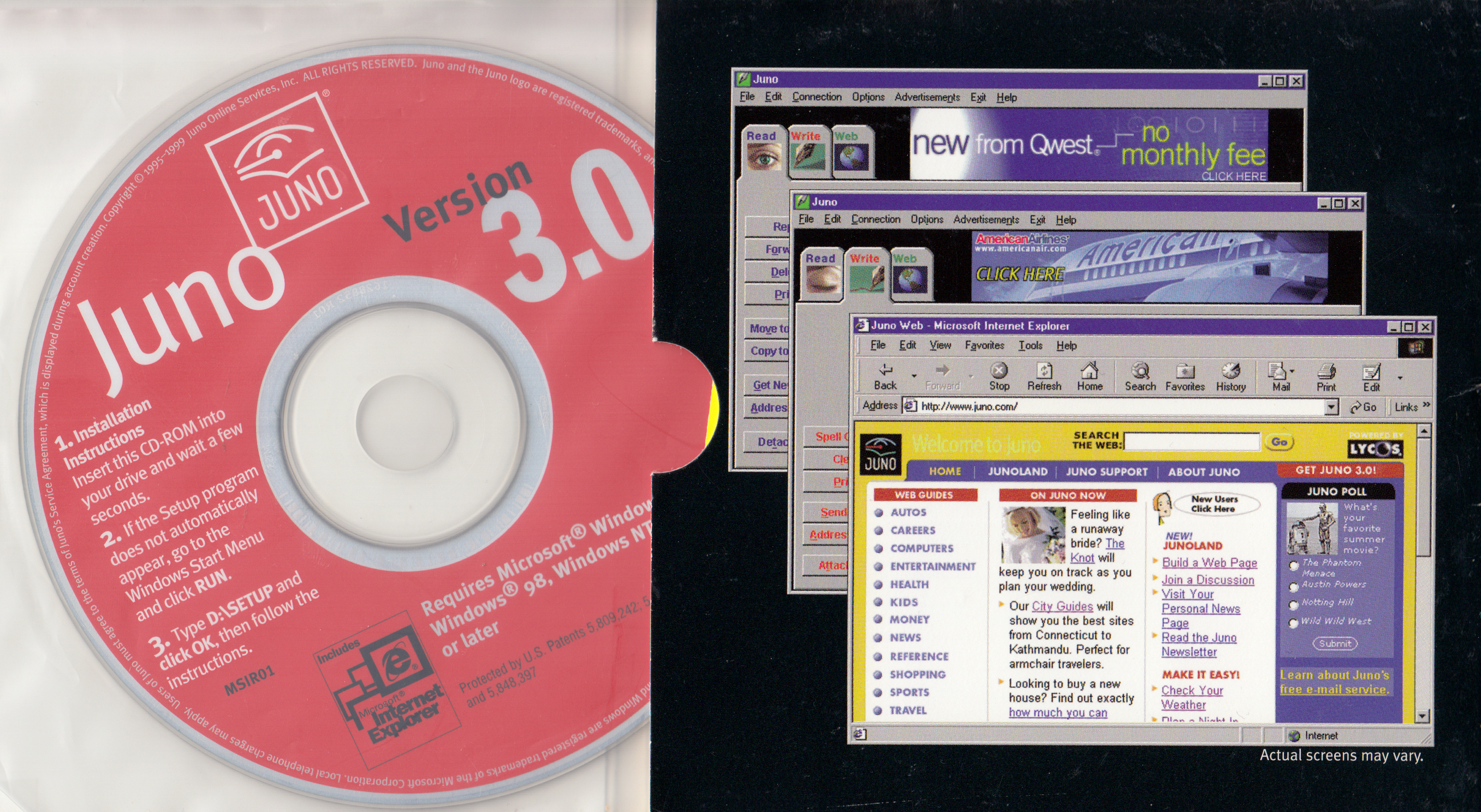 From sponsored search engine results to targeted posts on social media, advertising is inescapable on today’s internet. But in the early days of the commercial internet, it was not obvious that advertising would find a home in the online world.

When we think about the commercial internet of the 1990s, it is tempting to imagine a blinking banner ad on the early Web. But this image doesn’t reflect the everyday habits of early users. At the outset of the dot-com boom, most people were not sitting at their computers to surf the Web. They were there to read and write email.

Email is the bedrock of computer-mediated communication—“the glue that holds the Matrix together.”[1] To understand the commercialization of the internet and how it might have gone differently, we must examine how email did (and did not) adapt to the internet changing around it. 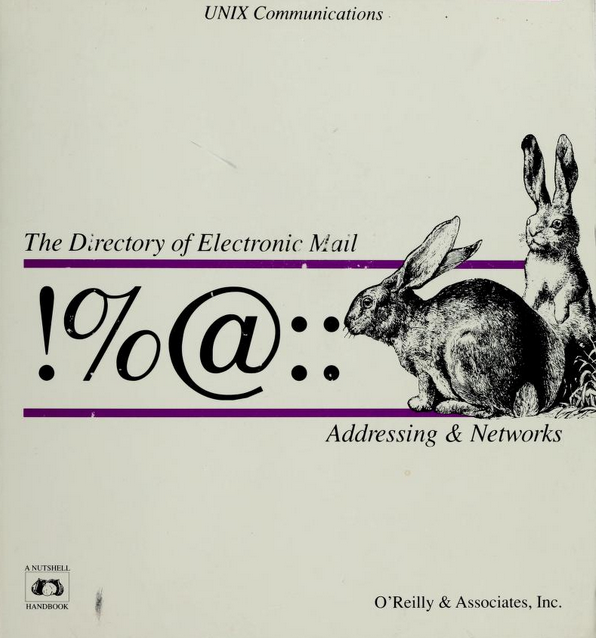 Historically, email addresses were tied to organizations. As users traded messages from one network to another, domain names like earthlink.net, virginia.edu, and f6.n105.z1.fidonet.org revealed information about their institutional affiliations and geographic locations.

The trouble with this addressing scheme was that social relationships frequently outlast organizational affiliations. If someone changed jobs, schools, or internet service providers, they lost their identity in the world of email. There was no forwarding service to notify correspondents that they had moved. Mail either bounced back with an error or it vanished into an electronic void. As email became an increasingly vital medium of communication, this lack of portability became unsustainable.

Juno was founded in 1996 with the goal of providing a standalone email service for the commercial internet. Company PR compared the existing email paradigm to “renting” a mailbox and promised an inbox independent of employers or ISPs. Further, they claimed to provide this service at no cost to the consumer. The pitch was straightforward: “You need email. But you don’t need to pay for it.”

To cover expenses and (eventually) turn a profit, Juno planned to place advertisements on the screens of their subscribers. The founders compared Juno’s business model to network television. “You don’t have to pay CBS to watch the nightly news, or NBC to watch Seinfeld,” they wrote on the company FAQ, “We believe this is the way it should be with email as well.”

Juno was not an archetypal dot-com. While other internet firms were renting lofts in the San Francisco Bay Area, Juno was created by Wall Street quants with an office in New York City. David E. Shaw, CEO of Juno’s parent company, was an vocal supporter of Juno as well as a member of the President’s Council of Advisors on Science and Technology—a connection proudly noted on the Juno website. In statements to the press, Shaw echoed a vision of the internet as an ad-supported mass medium, touting Juno as “a first step toward the goal of providing universal access.”

But the creators of Juno planned to offer a superior form of advertising to broadcast television. On the internet, they argued, advertising would be “more palatable” to consumers and “more valuable” to advertisers than on a broadcast medium because the messages could be tailored to the interests of individual subscribers. They were not yet building the sort of mass surveillance that would emerge on later email services. Rather, Juno relied on a brief survey sent to new subscribers to populate their database. According to a reviewer at the Washington Post, the survey asked for demographic information along with general preferences regarding hobbies, travel, and consumer electronics.

Juno correctly anticipated concerns about privacy among potential users. They were adamant about not scanning the content of subscriber email and maintained that all “targeting” was done using information gathered from the survey. Yet, critics bristled at being asked to fill out the questionnaire. A review published in Newsweek argued that Juno collected “far more personal information” on its survey than any other internet service [2]. Meanwhile, Juno maintained that they kept all individual responses confidential and shared only aggregate statistics with advertisers. (Of course, their terms of service were less forthright about the company’s obligation to user privacy.)

Juno was not the only company experimenting with ad-supported email in 1996. Hotmail debuted its own sponsored mail service on July 4—Independence Day in the United States. Yahoo! and Lycos followed soon after. What made Juno different from these “webmail” services was that Juno did not require access to the internet or the World Wide Web. In the tech press, Juno representatives argued that webmail could only be considered “free” if you discounted the cost of getting online in the first place.

To provide a truly “free” service, Juno operated independently of the Web. Instead of opening a browser, subscribers launched Juno’s proprietary software. The program presented users with a standard set of email functions organized into two panels: “Read” and “Write.” An interactive advertisement occupied the top-right corner of the window. The program ran primarily offline. The only time that it connected to the Juno servers was to send or receive new messages. During these brief exchanges, the software displayed a pop-up ad on the user’s screen and downloaded new banner images in the background. These images were stored on the user’s hard drive to be displayed offline.

Juno thrived in early months of the dot-com boom. In its first two years, Juno claimed 4.5 million new users. By the end of 1997, however, it was clear that the Web was becoming the primary platform for new online services. And Juno was outside of the Web.

In the summer of 1998, Juno began to pivot away from advertising as its sole source of revenue. First, they announced a paid “premium” service that included access to the Web. Then, they announced plans for an IPO. In 1999, Juno found itself jostling with several other “free” ISPs including WorldSpy and AltaVista. The bursting of the dot-com bubble forced nearly every competitor to shut down. Finally, in mid-2001, Juno merged with NetZero, marking an end to a five year experiment in ad-sponsored email.

This micro case study offers an unusual lens through which to observe the internet in a period of uncertainty and change. In 1996, it was not clear that advertising would become the default source of revenue for the consumer internet.[3] No one could say for sure what technologies would become commonplace, who could access them, or how they would be funded. The creators of Juno took a gamble on how this new medium was likely to develop. They saw email as an unglamorous motor of the information economy and believed that advertising could lower the barriers to access. This vision of the future was encoded into Juno’s technical architecture and woven through its business plan. Eventually, though, Juno was forced to adapt to the conditions of a different internet. They bet on the wrong horse.

But the purpose of revisiting a “dead” platform like Juno isn’t to flog its creators for failing to predict the market [4]. Rather, by taking the history of Juno on its own terms, we can set aside the internet that we currently have and imagine an internet that might-have-been.