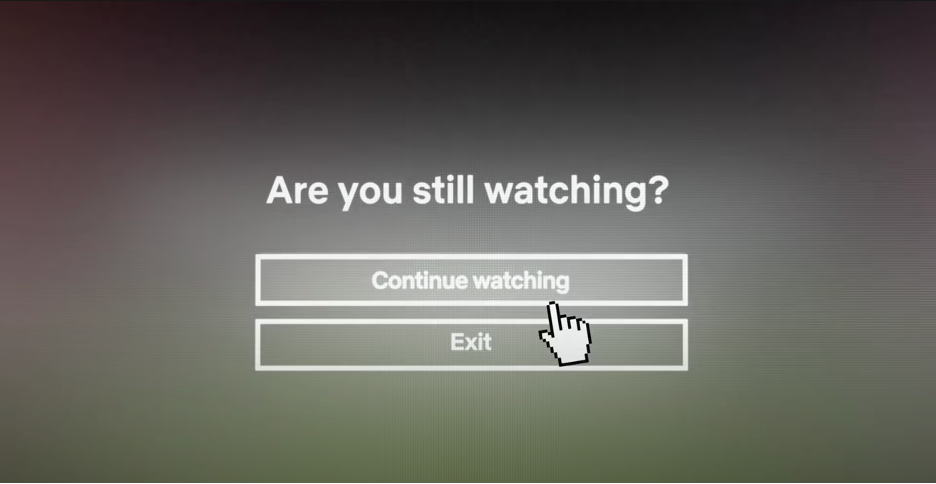 In October 2020, Netflix announced their test rollout of the option to turn off the “Are You Still Watching?” notification, an aspect of the Netflix viewing experience that is often described as a nuisance (Decider 2020). Although the phrase in question references being interrupted in one’s viewing, what has codified it as specific to Netflix is the experience leading up to its appearance on the screen: mainly, uninterrupted binge-watching. In the summer of 2021, Netflix consolidated at least two different branded YouTube accounts to create Still Watching Netflix, an account for paratextual content, primarily centering around Netflix Originals content. Born out of a reference to an aspect of Netflix’s interface usage, the Still Watching Netflix moniker seemingly intends to provide the ability to continue a kind of infinite scroll of Netflix content in order to never truly stop watching Netflix. This YouTube channel thusly provides a useful insight into the branding functions of Netflix’s social media strategies, specifically in understanding how this account communicates larger business goals, constructs Netflix’s rhythms of reception and temporality, and strives to achieve the streamer’s desired brand ubiquity.

Although the exact date of origin of the channel is unknown (as it replaced the former Netflix UK & Ireland account established in 2014 rather than launching with a new account), Still Watching came out with a three-minute launch video on September 1, 2021, with the description: “Still Watching Netflix is the channel that takes you deeper into the films and shows you love…We’re here to continue the conversation. Are you still watching Netflix?” Setting up the video is the aforementioned “Are You Still Watching?” alert on the Netflix screen, and once the unseen user clicks “Continue Watching,” the viewer is transported into a world of paratextual content.

Paratexts, as used by Jonathan Gray in television studies, refer to the content and materials surrounding a central piece of content. The key component in understanding the function of Still Watching is analyzing its content holistically, rather than by individual video. The various kinds of paratexts that make up this channel all operate as promotional material for the streamer overall, rather than just the content itself. While this fiscal year for Netflix has taken a toll on the overall brand (though recent Q2 numbers beat out what was forecasted earlier in terms of subscriber loss), the online presence of Netflix maintains an image of a streamer that houses successful and appealing content, and perhaps more importantly, a streamer whose content and brand occupy a considerable amount of online conversation. Utilizing formats designed to showcase the wide array of Netflix content, as well as online events such as Netflix Geeked Week to remind audiences that this flow of content will continue as more series and films come out on Netflix, Still Watching Netflix presents the exact version of the brand that the streamer desires to communicate with its digital audience, subscribers or otherwise.

Streaming scholarship discusses the difference between portals and platforms when discussing Internet distribution in order to address the shifting industry logics and technological practices (Lotz 2017). Streaming services such as Netflix are portals, meaning that they have content with very little user participation. Platforms, such as social media sites like YouTube, Tumblr, Twitter, etc., are driven by user participation whether creating or reacting to content (Lobato 2019). This distinction is crucial when analyzing Still Watching Netflix, because it is part of a larger strategy from Netflix to create more channels of engagement surrounding the Netflix brand outside of its central portal, which ultimately adjusts Netflix’s digital rhythms of reception.

Notions of rhythms of reception of media pre-date discourses surrounding streaming portals and media across platforms. In her 1983 visitation on Raymond Williams’ concept of flow, Tania Modleski breaks down the rhythms of reception of soap operas and other daytime programming (Modleski 1983). Stressing the participatory nature of daytime programming, Modleski looks to the blurring of fantasy and reality in both the perception of this programming but also the subsequent viewing experience. As other scholars update Modleski’s framework to account for digital viewing of media (Rustad 2018), the presence of Netflix across different media platforms instigates a need to address a decentralized understanding of what the Netflix viewing experience entails.

Still Watching, though designed to ultimately direct the viewer back to Netflix’s central portal, indicates an intentional blurring of what is Netflix and what is not Netflix in order to create a larger Netflix ecosystem. The content featured on the account is also a kind of reality blurring, in terms of featuring paratextual content which prolongs the experience of being within the Netflix ecosystem. When in the blurred reality of the Netflix ecosystem, the temporality within is driven by users’ social behaviors, but also by specific strategies utilized by Netflix themselves.

Midnight Mass (Netflix, 2021) Spoiler Warning, which dropped the day the series dropped on the service, indicating both preferred audience behaviors and the urgency surrounding the need to finish the series.

In his 2011 article on televisual temporality, Paul Booth argues that a “moment of spectacle” can in turn create a sort of temporality among a participatory audience, and that affect-driven narrative complexity can be played with in order to intentionally create this audience-driven sense of temporality (5). Still Watching Netflix is a way in which Netflix can attempt to conceptualize and construct a temporal audience. Netflix’s selection of content to be featured on Still Watching does offer promotional value, but this curation also serves as an indicator of which pieces of media Netflix is choosing to promote as successful to those interacting with its digital brand. Considering Netflix’s reticence to disclose specific audience metrics through a third party and an increasingly fragmented media landscape, the ways in which this channel provides the perception of what Netflix’s audience is watching at any given time are actually very important to acknowledge when discussing discourses surrounding this channel.

In terms of the preferred temporality of this audience’s watching behaviors, Still Watching also presents itself as part of a natural progression of Netflix’s binge model. As asked in the description for the initial promotional video, the notion of “still watching Netflix” extends more to the users’ continued interaction with the Netflix brand, rather than literally still watching within the central Netflix portal. Providing a seemingly endless flow of content indicates a currently firm brand position on continuing Netflix’s binge model across the larger Netflix ecosystem.

Still Watching Netflix, though not as popular as Netflix’s presence on other social media sites, provides room to explore different avenues of Netflix’s online presence. An important aspect not covered in this column is the ways in which this channel showcases and co-opts existing fan labor, and how the channel subsequently signals acceptable fan behaviors. Ultimately, Still Watching Netflix is a case study of how Netflix continues to try and use the digital space surrounding the confines of Netflix’s central portal boundaries and provides valuable insight into the business strategies defining these decisions.