The persistence of the soul: the afterlife in postsecular television
Helen Wheatley / University of Warwick 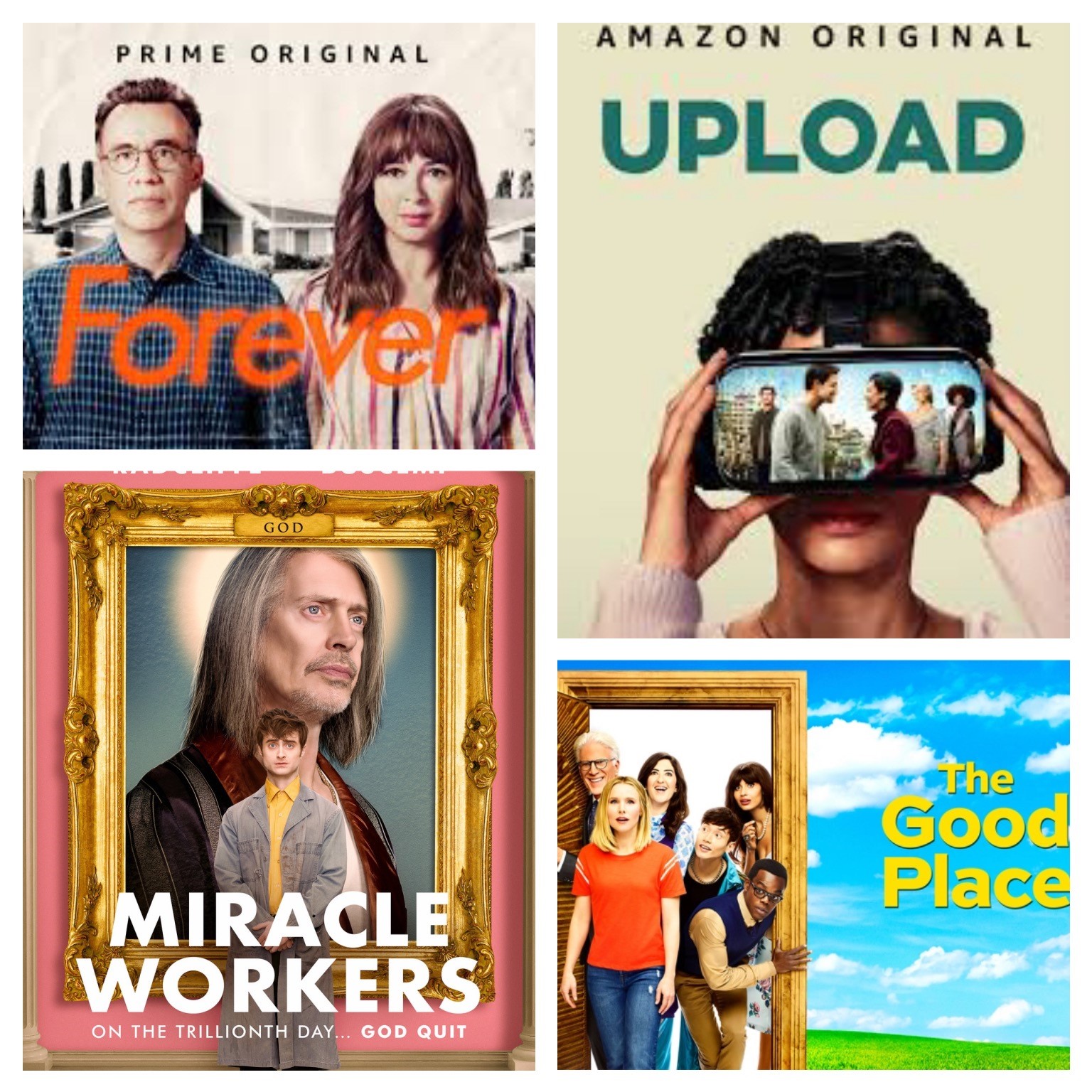 What happens to us when we die?

A recent cycle of televisual afterlives, programmes such as The Good Place (NBC, 2016-2020), Forever (Amazon Prime, 2018), Miracle Workers (TBS, 2019-) and Upload (Amazon Prime, 2020-), have creatively imagined the answer to this question. US television fiction has drawn on a multiplicity of religious and secular sources to create complex afterlife worlds which invite their audiences to consider how best to live, as well as what happens when we die. These are deeply American visions of life after death which reveal much about the socio-historical context in which they were made. They are also afterlives of the digital future, and explore how our understandings of life, death and the concept of the soul are shifting right now. My forthcoming monograph, Television/Death (Edinburgh University Press, 2023) discusses representations of the afterlife on TV as part of television’s wider ‘working through’ (Newcomb and Hirsch, 1983) of life and death. I give a brief preview of this in this short article.

Greg Garrett, describing the prevalence of narratives of the afterlife more broadly in Western literature and culture, proposes that

Whether one explains the passage of the soul through the prism of religion or logic, death is an irrevocable boundary. On one side we find the living; on the other, passing on either to nothingness or another form of existence. (2015: 30)

How we imagine this ‘other side’ depends, of course, on a whole variety of things: clearly it depends on our religious beliefs (or lack of them), our national identities and the kind of education we have had, but it also depends on the afterlife stories we have seen or heard, how an afterlife or afterlives have been imagined for us. Afterlife stories seek to reassure but also act as cautionary narratives; they help us make sense of the world and seek to ‘assure us that the universe has ultimate meaning and order, even if we may not perceive it around us in our everyday lives’ (ibid.: 192).

There have been a large number of afterlife dramas on US television in the last two decades, not just those listed above, and the number of post-death narratives has increased exponentially in the last five years. In 2020, the journalist Steve Greene noted of this burgeoning genre of programming that ‘Judging by the uptick in the number of shows and movies set in whatever place of existence awaits us when we die, the afterlife is a place of infinite possibility’ (2020). Alongside the programmes in my study in which characters enter another afterlife world, there are also many shows where the dead return to the ‘living world’ in some way. 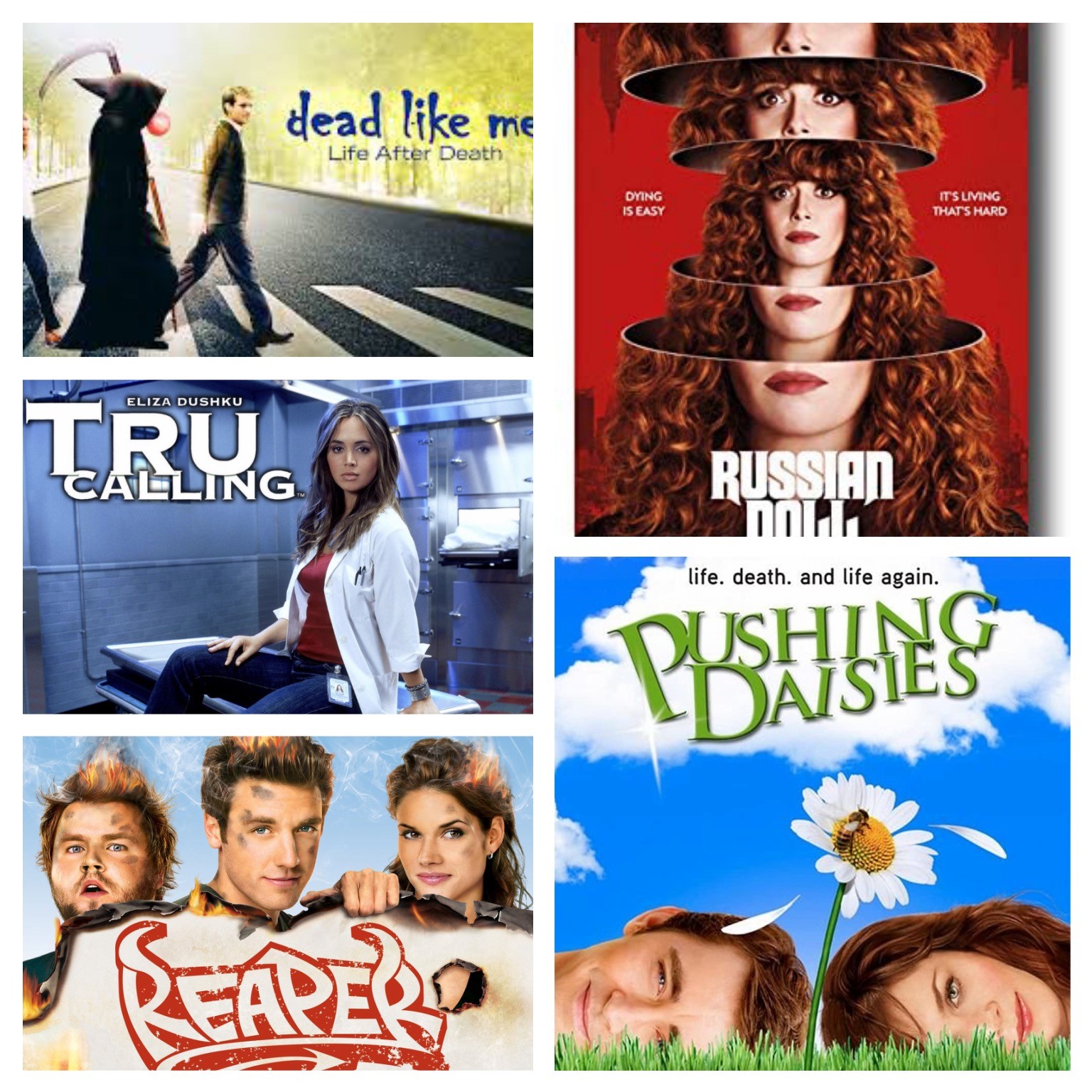 These shows include what Lyons refers to as ‘supernatural deed-oriented procedurals’ (2018: 112) such as Dead Like Me (Showtime, 2003-4), Tru Calling (Fox/SyFy, 2003-5), Pushing Daisies (ABC, 2007-9), and Reaper (The CW, 2007-9), and the ‘mind dependent worlds’ (Deacy, 2012: 67) of Russian Doll (Netflix, 2019-) and Lost (ABC, 2004-2010). There are also many narratives of the returning dead, including ghost/zombie series, which can also be viewed as forming part of the wider post-death canon. However, I am most interested in the imagined post-death worlds of recent televisual afterlives, and what they tell us about the preoccupations of contemporary American society.

Belief in the afterlife, whether a religious belief or not, rests on a belief in the soul: in 1997, a Gallup/Nathan Cummings Foundation/Fetzer Institute Study found that ‘[most] Americans believe they will exist in some form after death’ and that their expectation was that

the experience will be positive; they will be on a journey of some kind; they will experience spiritual growth; and the quality of existence will depend on things done in one’s life and one’s spiritual state at the time of death. (McIlwain, 2005: 12)

This raises the question, then, of the extent to which US TV afterlife narratives might be seen as evidence of the ongoing relevance of Christian, or at least religious, thinking in American television, even in the context of the increasing secularisation of society. It is to this question that we now turn. 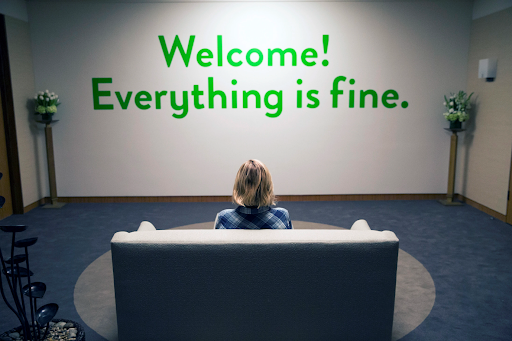 Eleanor Shellstrop waits on the couch outside of Michael’s office in The Good Place.

A woman wakes up to find herself sitting on a sofa in a smart, corporate-looking office. On the wall in front of her in large letters are the words “Welcome! Everything’s fine”. She is soon joined by a well-groomed man in a peacock-patterned bowtie who ushers her into his office to explain that she is dead, her life on earth has ended, and she is now in the next phase of her existence in the universe. Having had the manner of her death explained to her, she asks ‘So who was right? About all of this?’, gesturing around her at her afterlife surroundings. The man sitting opposite her explains ‘Let’s see – Hindus are a little bit right, Muslims a little bit, Jews, Christians, Buddhists, every religion guessed about 5%, except Doug Forcett… a stoner kid who lived in Calgary during the 1970s. One night he got really high on mushrooms and… Doug just launched into this long monologue where he got like 92% correct’.

The opening scene of The Good Place.

In the opening of The Good Place, described above, an exchange between newly-dead Eleanor (Kristen Bell) and Michael (Ted Danson), ‘architect’ of what we believe in the first season to be the titular ‘Good Place’, sets out the basis of the show’s imagined afterlife: that it will be drawn from a variety of religious treatise on the destination for souls after death, as well as, or in fact more so, from more secular imaginings of what happens to us after we die. This bit of dialogue might be seen as a neat encapsulation of the ways in which contemporary afterlife narratives on television work: that they reflect the multiplicity of religious doctrines and practices at play in the US today, whilst holding on to a number of competing or complementary secular world views, rendering these programmes good examples of what we might see as ‘postsecular television’. In their introduction to the postsecular in cultural theory and analysis, James Hodkinson and Silke Horstkotte propose that ‘once stable conceptual distinctions between “religion” and “secularity” are becoming blurred’ in the contemporary moment, leading to the deconstruction of ‘long-held assumptions about the connection between modernity and secularity’ (2020: 318). Drawing on the work of Kristina Stoeckl, Massimo Rosati and Robert Holton, who define a postsecular society as one in which ‘religion remains collectively meaningful without being opposed to secularity, because society itself is plural and Christianity has lost its monopoly on the Western imagination’ (2012: 2), Hodkinson and Horstkotte argue that ‘religious pluralism leads to new and diverse understandings of the secular’ (2020: 319). For them, the ‘postsecular turns into a methodological lens through which an open-ended engagement with the intersections of religion and secularity can begin’ (ibid.: 320).

This turn towards the postsecular prompts us to consider how religious and secular conceptions of the afterlife intermingle, in television fictions and beyond, for as Greg Garrett has acknowledged, ‘Cultural and narrative understandings can… help shape our ideas about these future [post-death] places or states of being; our perceptions of sacred as well as secular matters are always being informed by secular texts as well as holy ones’ (2015: 5). For example, Garrett sees the obsession with angels in contemporary America as stemming as much from the imaginative work of theologians, artists and writers as it does from the books of the Bible (ibid.: 69). Whilst some journalists understood the turn towards afterlife narratives on American television at the start of the twenty first century as a shift, particularly post 9/11, towards a greater ‘religiosity’ and ‘conservatism’ (see Stanley (2003), for example), others have argued that this programming wasn’t finding all of its answers, or its sources for answers, in Christianity or in any other religion. As Hal Hinson acknowledges

The message seems to be that it’s possible to create shows dealing with religious subjects without wrapping them up in miracle-of-the-week platitudes and that metaphysical issues can be addressed artistically in an arena of exploration and discussion rather than one of moral absolutes. (2004)

Whilst the series at the heart of my study do not create what Garrett has called ‘fluffy cloud heaven’ (2015: 7) or a ‘fire and brimstone’ hell, proffering afterlife worlds which are immediately recognisable from previous visualisations of the Christian afterlife, this does not mean that the depiction of the afterlives on offer in these series is wholly secular either. Series creator of The Good Place, Michael Schur, has referred to the series as ‘agnostic’ (McFarland, 2017), and also argues that he made it very clear when pitching the series to NBC that ‘it was not a religious show’ (Egner, 2017). Schur later claimed that he stopped doing research on conceptualisations of the afterlife in world religions because he ‘realized [his series is] about versions of ethical behaviour, not religious salvation… The show isn’t taking a side, the people who are in it are from every country and religion’ (Burton, 2018). For Schur, it appears, the fact that The Good Place isn’t monotheistic and the fact that it focuses on ethical, rather than pious, behaviour to guarantee a spot in ‘the good place’, is what makes this show ‘not religious’. However, if we think of The Good Place as postsecular television, we can see that it both constructs a secular/humanist vision of the afterlife and also borrows quite liberally from a variety of religious stories and doctrines, whether that’s the fact that the series has a ‘good’ and ‘bad’ place in the first place, in line with Christian ideas of heaven and hell, or that the ‘architect’ Michael is named after St Michael the archangel, judger of souls (Egner, 2020), or, indeed, the recourse to Buddhist conceptions of death and rebirth in its final episode, ‘Whenever You’re Ready’ (S4, E13). The messy, complex, and ambiguous incorporation of religious ideas of post-death experience into the secular visions of the afterlives under examination in my study are, therefore, what renders them ‘postsecular’. My forthcoming book therefore proposes that these programmes draw on multiple sources to construct their visions of the afterlife in order to make sense of death and dying for characters in these programmes, and for the television audience.