Failing to Win: Mandatory Failure in Getting Over It
Isabelle Williams / University of California, irvine 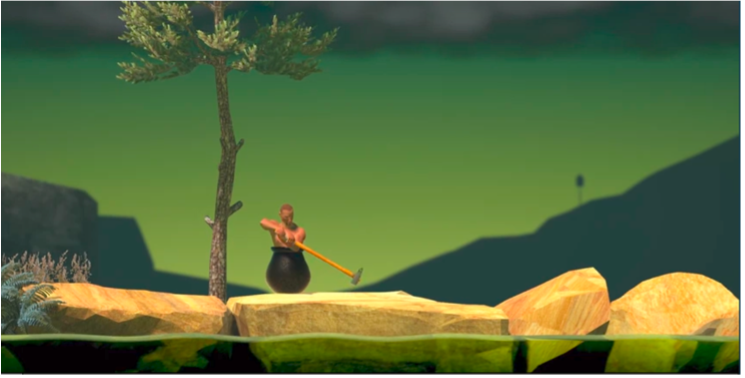 The opening scene of Getting Over It

A black cauldron sits with an axe propped against it. Suddenly, the cauldron begins to shake. Then, a man emerges to his torso and grasps the axe, waiting for the player to begin playing. This opening scene of the video game Getting Over It (2017) by Bennett Foddy presents a seemingly simple objective which is to climb the mountain of various material with a hammer; however, the game is designed explicitly to fail. Failure saturates the space of play from all aspects of the game from the description to actual game play, as well as the narration. I will examine how failure manifests in Getting Over It specifically how failure relates to both the space of play and the body of the playable character.

My examination of failure builds on current theories of failure within game studies field. The most direct theory of failure, referred to as “the simplest theory of failure” by scholar Jesper Juul, is that failure contrasts winning to enhance the experience of winning. In “Fear of Failing? The Many Meanings of Difficulty in Video Games,”Juul locates three distinct types of player failures, (1) Energy punishment, (2) Life punishment, and (3) Setback punishment. Juul also examines attribution theory, a psychological framework, that positions punishment alongside failure. While challenging environments and failure are discussed in terms of game design (Juul; DeKoven; Anderson, Campbell, Steinkuehler) and the various categories of failure in terms of terminology (Aytemiz, Smith), failure is still positioned as the opposite of winning. However, Getting Over It makes failure mandatory for winning.

The mandatory quality of failure is evident from very start of the game, specifically the lack of tutorial. While most games begin with a tutorial that provides guidance, there is no guidance in Getting Over It. In place of a tutorial, the player is forced to figure out the mechanics of the game by trial-and-error style of playing. The lack of tutorial sets up the expectation of failure through play. As the player begins to play, the ever-present risk of falling becomes immediately clear especially as this game has no save points meaning falling means restarting. Here, failure becomes synonymous with the act of falling because it is the falling of the playable character which triggers the game restarting. While the failure is built into the game play, the narration also fixates on failure.

Failure manifests in the narration in two specific ways. First, the narrator, Foddy, speaks directly and often about the task of restarting and failing. For example, during the opening narration as the player is beginning to learn by trial-and-error, Foddy explains the origins of this game as drawing direct inspiration from a B-game called Sexy Hiking (Jazzuo, 2002). Foddy refers to this B-game as a “cultural trash” however, he brings to flush out this seemingly derogatory term by stating “When everything around us is cultural trash, trash becomes the new medium, the lingua franca of the digital age. You can build culture out of trash, but only trash culture: B- games, B- movies, B- music, B-philosophy.” Trash becomes a term of building; however, what is the status of failure? More specifically, why is trash and failure being tied up together? The second way failure manifests in the narration is only place failure is directly mentioned. The first explicit mention of failure is when Foddy quotes Mary Pickford, a silent film star and contemporary of the Charlie Chaplin, stating “This thing that we call ‘failure’ is not the falling down but the staying down – Mary Pickford.” Suddenly, the player is provided with a new definition of failure as the staying down. With this new definition of failure, the game play becomes more treacherous specifically as the mountains of materials become more slippery and the ability to climb is nearly impossible at times. This impossibility always has to do with the limitations of body of the playable character because the playable character is stuck within a cauldron and can only use a hammer to move. Here, the limited movement of the character’s body is the a priori of which the entirety of the failure in the game is possible and necessary. Through the establishment of the movement of the term failure from and tied to the body of the playable character, I am terming this as plasticization of failure. 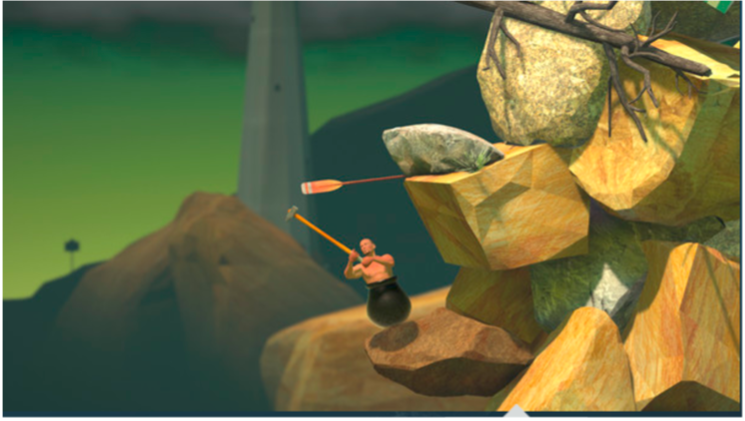 Getting Over It‘s first obstacle

By plasticity, I am specifically thinking of scholar Catherine Malabou’s definition as well as scholar Zakiyyah Jackson’s expansion of plasticity. The primary identifier of plasticity seems to be its transformative ability. Malabou leans into the transformative property of plasticity stating that “plasticity thus appeared to me from the outset as a structure of transformation and destruction of presence and the present” (Malabou 7). In Plasticity at the Dusk of Writing: Dialectic, Destruction, Deconstruction (2009), Catherine Malabou locates plasticity as a term tied up with the conceptualization of the plastic. As Malabou states, “form is plastic” (Malabou 1). With this understanding of form as plastic, Malabou then locates plasticity as “the spontaneous organization of fragments” (Malabou 7). For Malabou, metamorphosis is key to opening the meaning of plasticity as she states, “Open to metamorphosis, including its own metamorphosis, plasticity thus experienced a widening of its meaning so that it refers not to the play of changing form in any particular aspect or any given thought but rather to the metabolism of philosophy, the exchanges arranged between its inside and outside, itself and its other” (Malabou 27). This insistence on transformation and metamorphosis allows Malabou to reposition plasticity so that “…plasticity refers to both a new mode of being of form and a new grasp of this mode of being itself, in other words, a new scheme” (Malabou 57). Moving with and from plasticity as the taking and giving of form, Zakiyyah Jackson offers the understanding of this type of plasticity as antiblack by stating that “Slavery’s technologies were not the denial of humanity but the plasticization of humanity” (Jackson 71). Returning to failure within the game, failure is necessary for the game and to win, one must simultaneously lean into the limitations of plasticization or rather reorient the expectation of the body and what it means to be plastic. 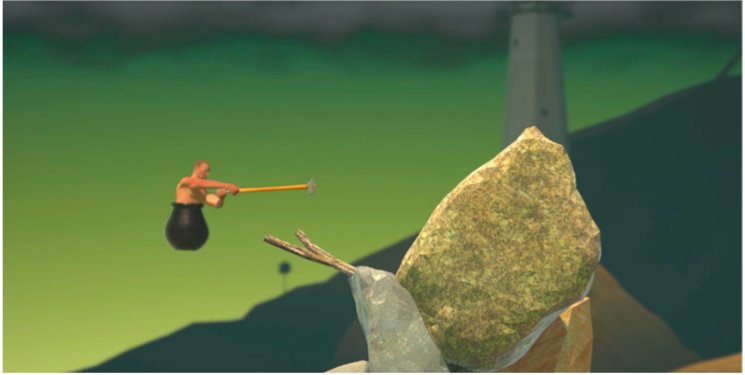 At the top of the mountain in Getting Over It