Shortly after meeting Alex, the grandson of the elderly Russian woman whom she cares for, Olivia, a trans woman and undocumented immigrant from the Philippines, fantasizes about him reading a love letter that his grandfather wrote to his babushka: “I will cover you with love when I next see you, with caresses, with ecstasy.” That night in bed, her hands wander down her slip and into the crease between her thighs as she confesses in her mind, “I crave your hands, their brute hunger, emissaries of carnage, wandering in the moonlight, engulfing me in flames.” She imagines him lying beside her, his hands following her own, covering her mouth.

Later, Alex offers to take Olivia on errands, driving her from the house he and his babushka live in in the Russian ethnic enclave of Brighton Beach, Brooklyn, to the Filipino neighborhood in Woodside, Queens. There, they witness US Immigration and Customs Enforcement (ICE) officers arresting a presumably undocumented immigrant. On their way back, Olivia admits to Alex that she is also undocumented, trusting him with a secret he will later use against her. When they return home, Olivia impulsively kisses Alex before they tumble into bed. Alex kisses Olivia down her body as the camera focuses on her face, moaning in pleasure. 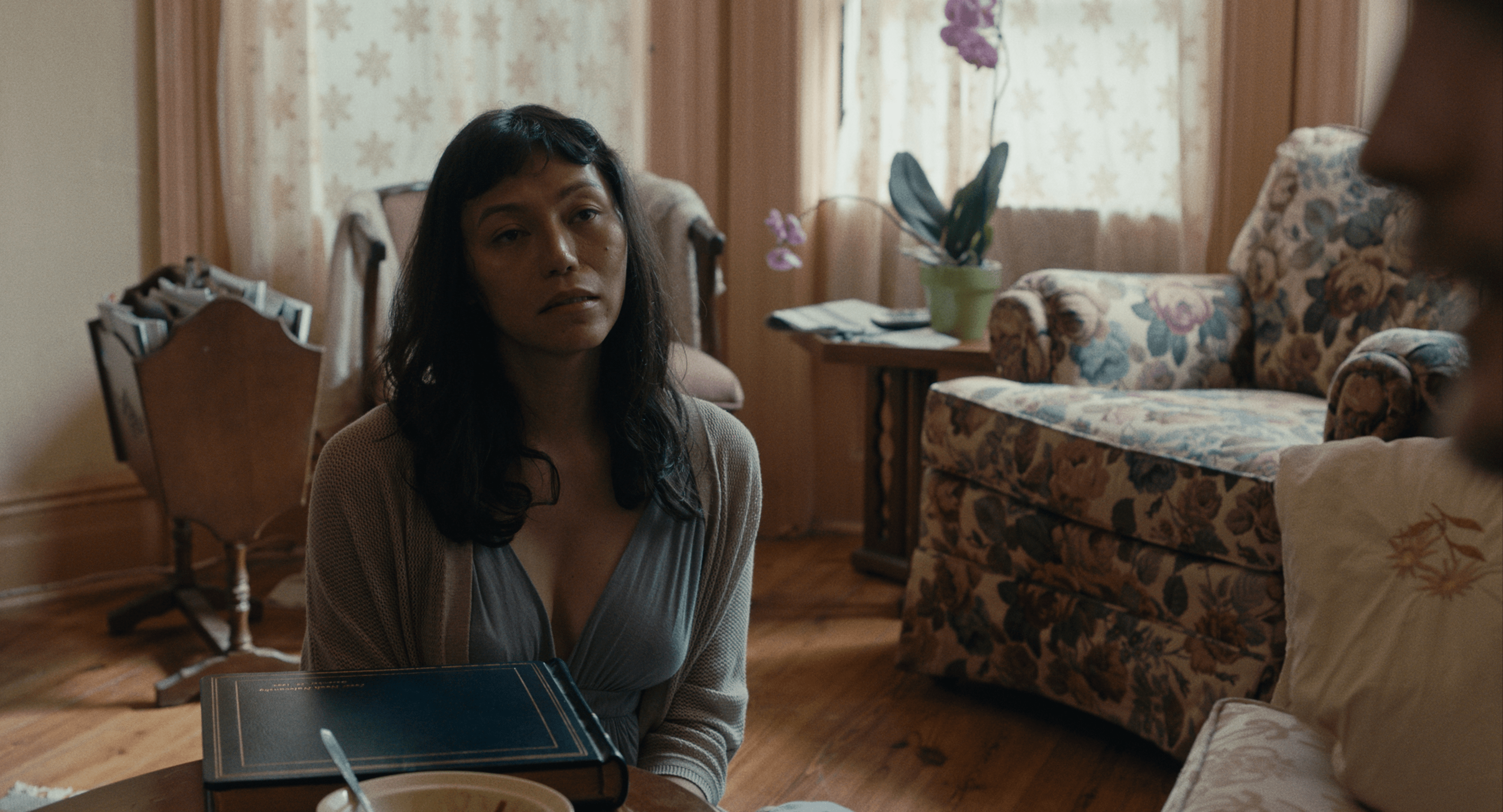 These two scenes, to me, exemplify the central tension in Isabel Sandoval’s breakout film Lingua Franca, which first premiered in 2019 before being acquired by Netflix in 2020, between seeing and being seen. Set at the height of the Trump Administration’s crackdown on undocumented immigrants and trans rights, the film’s narrative explores the tension between Olivia’s desire to be seen and her fear of being watched and exposed as trans and undocumented.

As an Asian American trans femme and a media and communication scholar, I think a lot about what representation means, what it does, and how it functions. In both the Asian American and trans communities, media representation is a troublesome beast; spend any amount of time on Asian American Twitter and you’re bound to run into debates about the importance of #representAsian, or the idea that seeing more and/or better Asian representation in mainstream media will positively impact Asian American communities. In the introduction to their edited volume Trap Door, Tourmaline, Eric A. Stanley, and Johanna Burton similarly write about the “trap” of trans representation, which they describe as “a contradiction in which […] trans people were at once gaining unprecedented representation in the mass media while remaining subject to explicit forms of prejudice and violence.”[1]

As my colleague TJ Billard and I argue in a forthcoming article, the idea of “good” or “positive” and “bad” or “negative” representation has long structured studies of trans media representation (by extension, I would argue that this dichotomy is also common in many other critiques of media representation, including Asian American media).[2] However, as Asian Americanists have argued, even ostensibly positive representations of Asians in mass media ultimately uphold white supremacy by reducing Asians to the model minority, a stereotype that not only essentializes us based on our supposed cultural values of hard work, but was also used to further demonize Black and Latinx Americans (if there’s a model minority, there must also be a problem minority). Frank Chin and Jeffrey Paul Chan use the term racist love to describe this stereotype, citing the detective Charlie Chan as one example.[3] Similarly, positive representations of trans women privilege those who adhere to normative ideas of respectable womanhood, while further marginalizing those who do not conform to gender norms.[4]

While some viewers resist or might even find pleasure in stereotypical representations onscreen,[5] these critiques of media representation often presume that media are produced by the majority for the majority (e.g., white, cisgender, heterosexual, and/or male). This is certainly true of most mainstream media, but we are increasingly seeing minoritized groups taking control of their own self-image. My larger research agenda is concerned with how trans people communicate their experiences to viewers when given the tools to produce their own self-image; how does media representation change when trans people are also behind the camera? Much of my research looks at the social media entertainment industry, particularly YouTube, as a space that allows trans creators to produce their own media, but what about legacy media?

In recent years, TV shows like Pose (FX, 2018-2021) and Veneno (Atresplayer Premium/HBO Max, 2020-) have become smash hits, being rightfully celebrated for their portrayal of trans women who are played by trans actors. I feel immense joy and pride from watching these shows. However, I also can’t help but to feel like both series ultimately seek to translate trans experiences for cis audiences, like I’m being lectured about why trans lives matter. For a mainstream audience, I get it: this is one way to normalize trans identity for people who may have never knowingly interacted with an openly trans person before.

When I watched Linga Franca, on the other hand, I felt—well, seen. I come back to this question of seeing and being seen: who is watching whom? Of course, within the narrative of the film, Olivia carries with her the anxiety of being watched by ICE or by Alex’s cisgender friends who crack jokes about trannies; this overarching sense of being watched reflects the US security state’s policing of undocumented immigrants and increasing surveillance of trans people.[6] And yet, as I described above, Lingua Franca also portrays the pleasure—and the pain—of watching someone else, in the moments that Olivia and Alex share together when Olivia can experience the fleeting joy of being desired. For many trans people of color, our experiences are shaped by how we are seen—like the moments when I wonder whether that catcaller is going to change his tune once he clocks me—and our desire to see ourselves reflected on screen.

After Olivia confides her undocumented status to Alex, he offers to marry her so she can get her green card. One night, after a night of drinking, Alex’s friend raids Olivia’s dresser while she’s in the shower, stealing her money and discovering her passport, which identifies her as trans. Alex takes Olivia’s passport and keeps it in secret, concocting a dubious story about an ICE agent breaking into her room to steal it from her. Later, he invites her out on an overnight trip where he drunkenly admits that he knows that she’s trans. The next morning in their hotel room, she confronts him and asks him to return her passport. Knowing that he’s been found out, Alex apologizes, “I want to make this right. I want to marry you. Isn’t that what you want?” 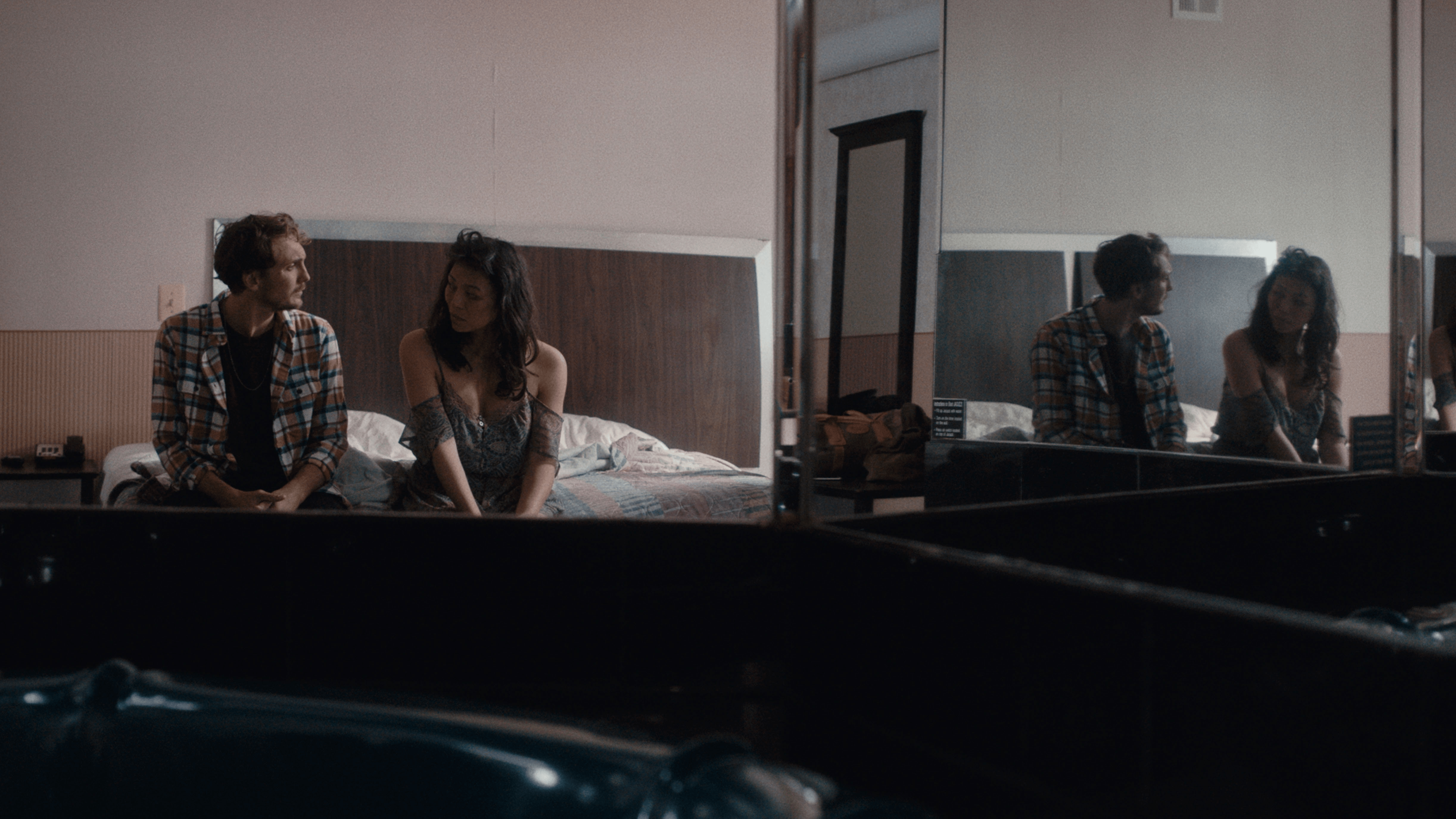 Olivia confronts Alex, asking for her passport back.

The emotional climax of the film, this scene is visually fragmented by its use of mirrors, perhaps a heavy-handed reference to Lacan’s mirror stage. We see Olivia, doubly reflected, sitting up in bed as Alex returns from a smoke. At first, Alex appears only in reflection, making it look like he and Olivia are looking in different directions, underscoring the disconnect between them because of this breach of trust: we look at Alex’s reflection looking at Olivia looking at Alex offscreen. It is here, however, that Olivia sees Alex for who he truly is, sees the danger he has put her in, while Alex hangs onto a fantasy of who Olivia could be, the future they could have together.

No, she decides, this isn’t what she wants. And so she chooses instead to walk away, rather than be indebted to a man who looked at her but couldn’t see her.