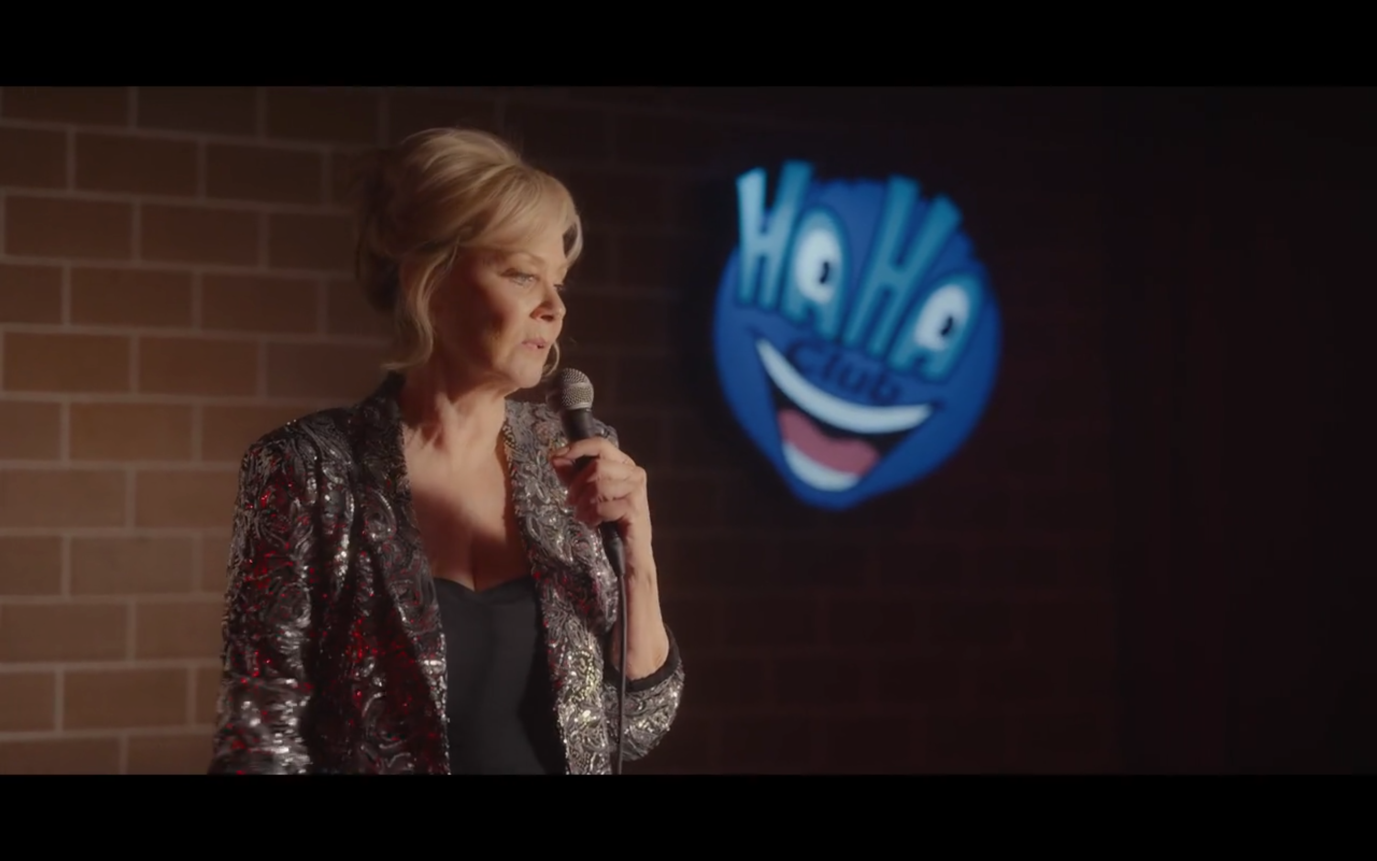 Generation gaps are nothing new. The silent generation struggled with the baby boomers. The baby boomers viewed Gen-Xers with suspicion as did the latter with millennials. Now, it is millennials that complain about Gen-Zers while the Gen-Alphas have a few more blissful years before they face the music. There may be exceptions and subtle variations, but it happens to almost every human in the western world. It usually comes without warning around your mid- to late forties; one day, you simply stop viewing that new (or old but “refreshed”) idea that comes from the young individual in front of you with openness and acceptance and realize that “the good old days” were just that. Good and long past. The gap has just been formed in front of you. What happens when you add gender into the equation?

Well, according to Hacks, the solution is not easy. Hacks, an HBO Max niche sadcom, is not only female-centered – after all, the last decades have seen a great rise in female-driven narratives both in front of and behind the cameras – but dares to frame its two female protagonists in generational terms, a representational rarity. Ava (Hannah Einbinder), a 25-year-old Gen-Zer, is a TV writer, who had a rather lucrative gig that allowed her to buy a house in Los Angeles, only to be fired for a non-PC tweet. Deborah is an established stand-up comedian in her late sixties, has a steady Las Vegas contract, a faithful audience, wealth and a healthy appetite for new business ventures. In the pilot, Ava arrives in Las Vegas for an interview to write jokes for Deborah, a job she is not even remotely interested in, while Deborah has no idea she needs help with her show.

Ava and Deborah’s intergenerational relationship, with all the ups and downs getting to know another human being entails, is at the center of Hacks and this article. Except for their love for writing comedy, Ava and Deborah have almost nothing in common. They dress differently, talk differently; they even have different views on what is funny or not. Their age difference makes them a great “odd couple,” while their gender invites a variety of discussions on feminism, sexuality, antagonism, ageism and friendship, among others.

Patriarchal discourse has successfully placed antagonism between two women highly in the list of “innate” feminine traits. Although both cinema and television have capitalized successfully on this “truth” (i.e. Working Girl [1988], Single White Female [1992] and daytime dramas, respectively), I will not be placing Hacks in this context. Neither will I be using the mother-daughter feminist trope although I understand how such a framework may seem appealing. Here, I’d like to focus on Hacks as a “womance” or a female friendship narrative, applying Karin Hollinger’s work on cinema to television. In her study, Hollinger used female friendship as the dominant structural element of films from various genres to “examine the complex and multidimensional nature” between the narratives and their mainly female viewers, approaching them as “complex products of an intricate process of negotiation” (Hollinger 1998, 6). Using three separate frames from three different episodes, I comment on the semiotically charged mise-en-scène to offer a brief account of the formation of Ava and Deborah’s womance. In the process, I explore if and how these two female characters, separated by more than four decades, can actually become allies and supporters of each other, despite the obstacles their different experiences and desires bring to their interactions with one another.

The two women meet for the first time within a professional context that none of them chose or asked for and there is nothing more telling than the following shot of Ava’s interview at Deborah’s estate, which in turn provides a memorable “meet-cute” for the starring duo. 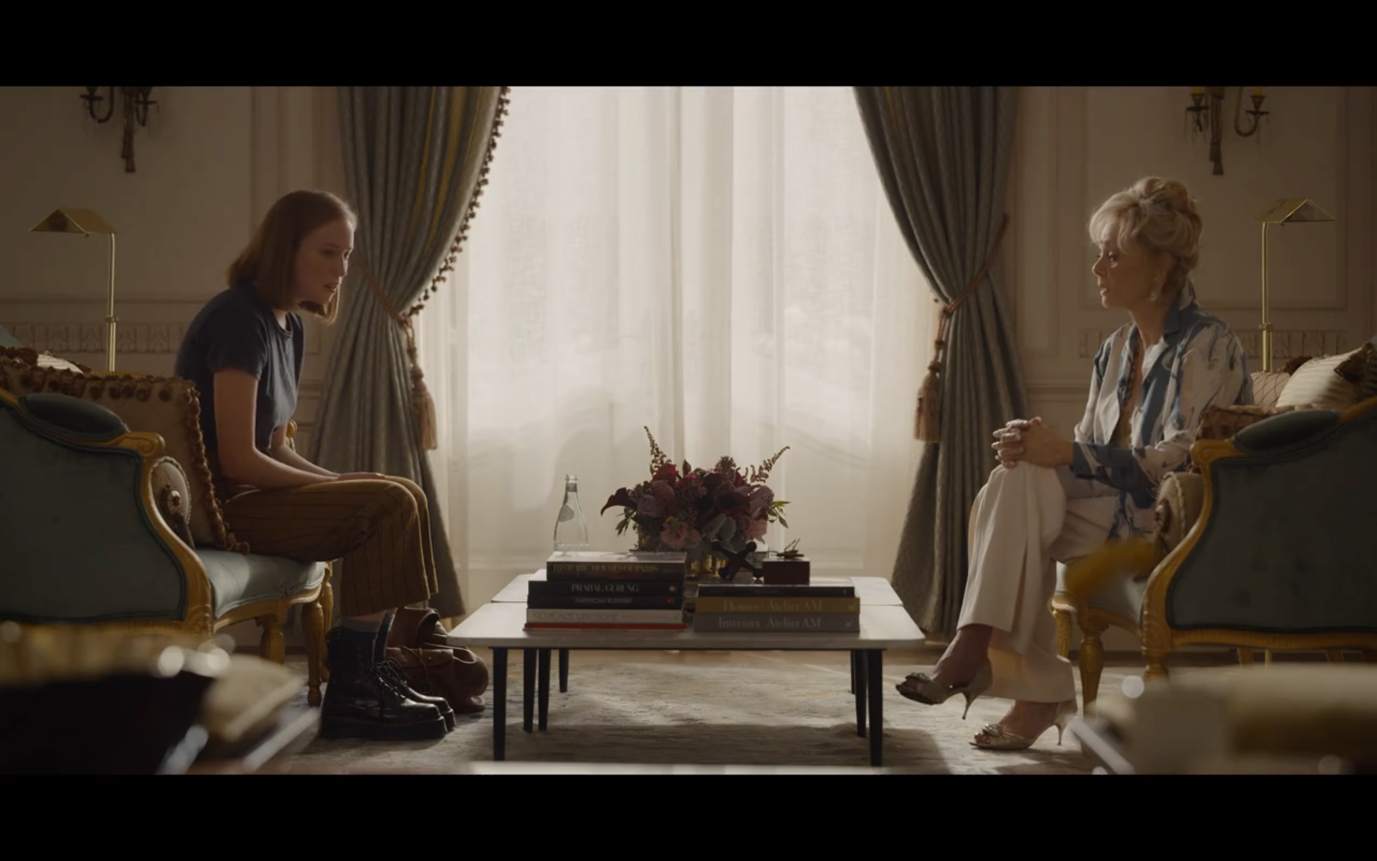 Figure 2: A sitting stand-off between Deborah and Ava (Episode 1)

Although the first season contains rare one-shots of the two female protagonists together, I find that each one is strategically placed and narratively imbued with extra meaning. I call this first one-shot of Ava and Deborah the “establishment shot” of their relationship, the basis of the narrative. Audiovisual texts have the great advantage of polysemy and indeed, the signs one sees in the frame contain more than the simple denotative information. Ava’s and Deborah’s body language and attire are already imbued with several details. Deborah is sitting upright with her legs crossed, she is looking directly at Ava, wearing a classic yet elegant outfit, and her fingers are interlaced connoting emotional control. On the other hand, Ava is looking away, she’s slightly slouching with her hands between her legs, a sign of insecurity and lack of confidence. Meanwhile, her outfit – which Deborah comments sarcastically on – goes against every online list that advises on the “appropriate” attire for interviews.

Although this is an interior shot, it recalls a lot of western duels that take place under the bright sun. While Ava is clearly losing, her generational background as a Gen-Zer, a person who openly speaks their mind and questions authority, leads to a verbal fight between the two women. After several insulting remarks from Deborah, Ava turns to her and says: “The last thing on Earth I want to do is move to the desert to write lame jokes for an old hack!”, while she doesn’t even wait to close the front door before calling Deborah “a fucking bitch”. Deborah’s continuous insults and emotional detachment add to Ava’s rage, along with her professional and personal (we will soon learn) frustration. Nevertheless, she is finally hired by Deborah at the end of the next scene, which we can only hypothesize happens because Deborah recognized some talent in her or even some aspect of herself.

Their initial professional-only relationship uncovers some of their similarities while it allows viewers to glimpse at both character’s emotional burdens and gradual understanding of each other.

In episode 4, we become witness to a kind of a milestone in the two women’s journey, beautifully assisted by the homage the director pays to romcoms of the past. Deborah and Ava are shown in a split screen, reminiscent of the classic When Harry Met Sally (1989) as well as Pillow Talk (1959). This time, however, there is no underlying romantic subtext but that of the beginning of a female friendship. Ava and Deborah’s relationship is evolving as they both learn to enjoy each other’s company as well as learn new things from each other (Deborah had never heard of the DivaCup or wikiFeet while Ava had no idea that Deborah helped many women find success as comedians and she even had the chance to become the first female host of a late-night show decades ago). 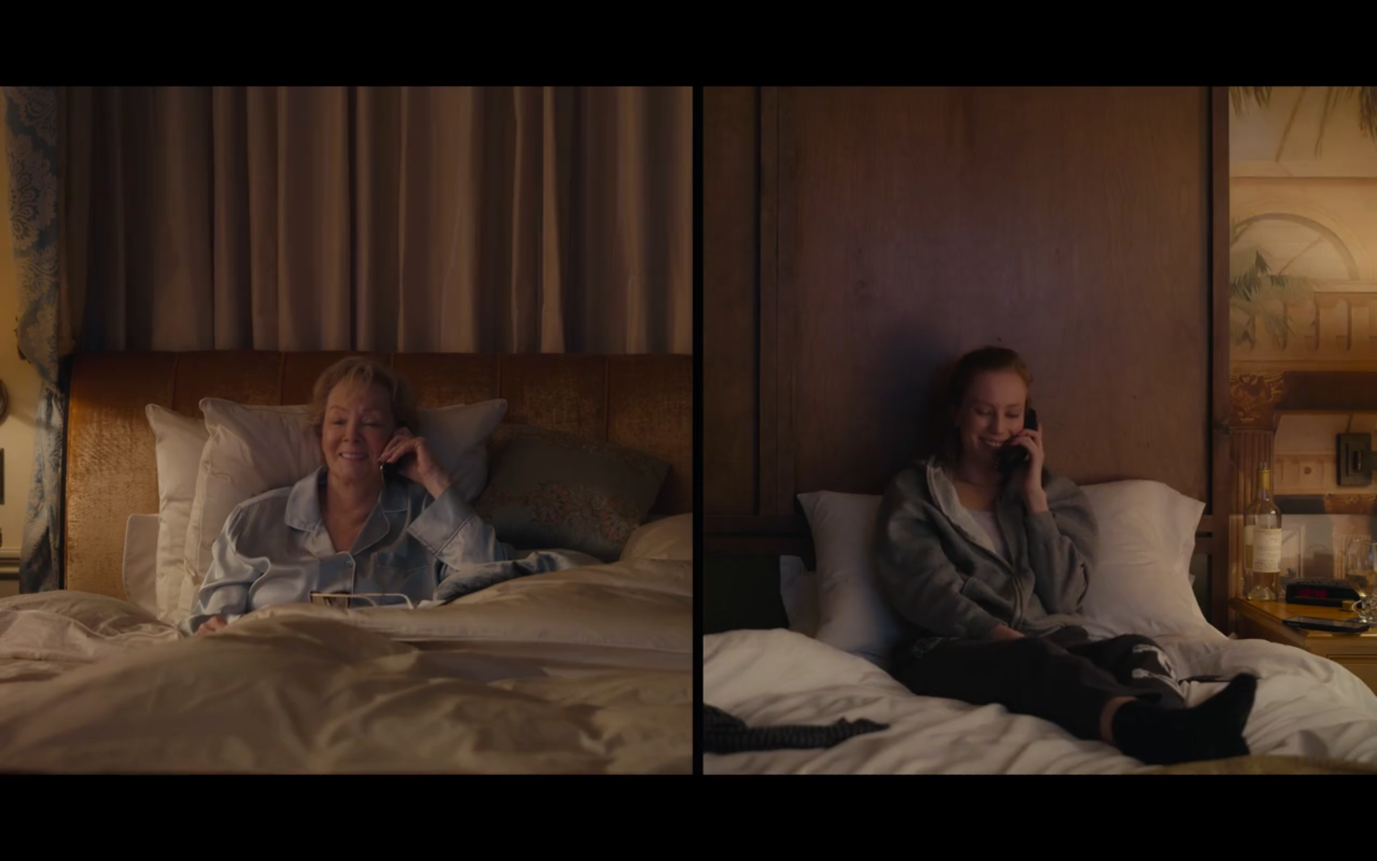 Complications of course soon occur and after yet another fight, the two women stop working together until the finale of the first season. Although Deborah feels betrayed by Ava, she does show up at the funeral of her father, after which the two women open up their hearts to one another in Ava’s old bedroom. 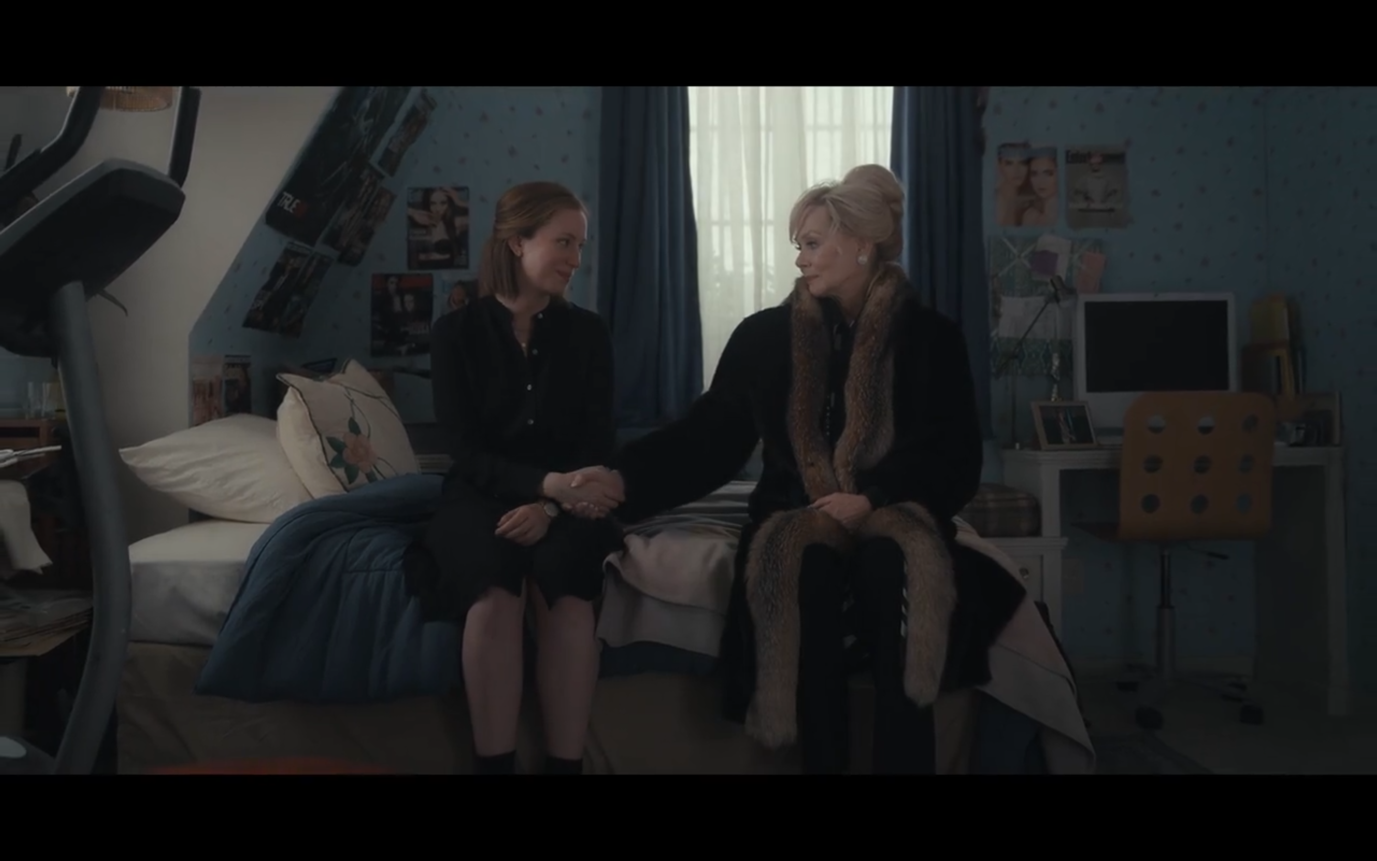 This time, however, there is no split screen, nor are the two women sitting opposite each other. Instead, they sit beside each other, holding hands and looking at each other; their physical closeness echoing their emotional attachment. Ava may have initially been perceived by Deborah as an “entitled millennial,” quickly to be corrected and learn that she is a Gen-Zer, and Deborah may have been perceived by Ava as a has-been who did nothing important and has nothing to offer. However, through its visual power, Hacks’ finale movingly encapsulates that not only is female antagonism an obsolete patriarchal idea but also that intergenerational female friendships can be enriching and inspiring for both sides. And that is how you solve an equation.