In on the Joke: Self-Aware Advertising in Comedy
Kellie Veltri / University of Texas at Austin 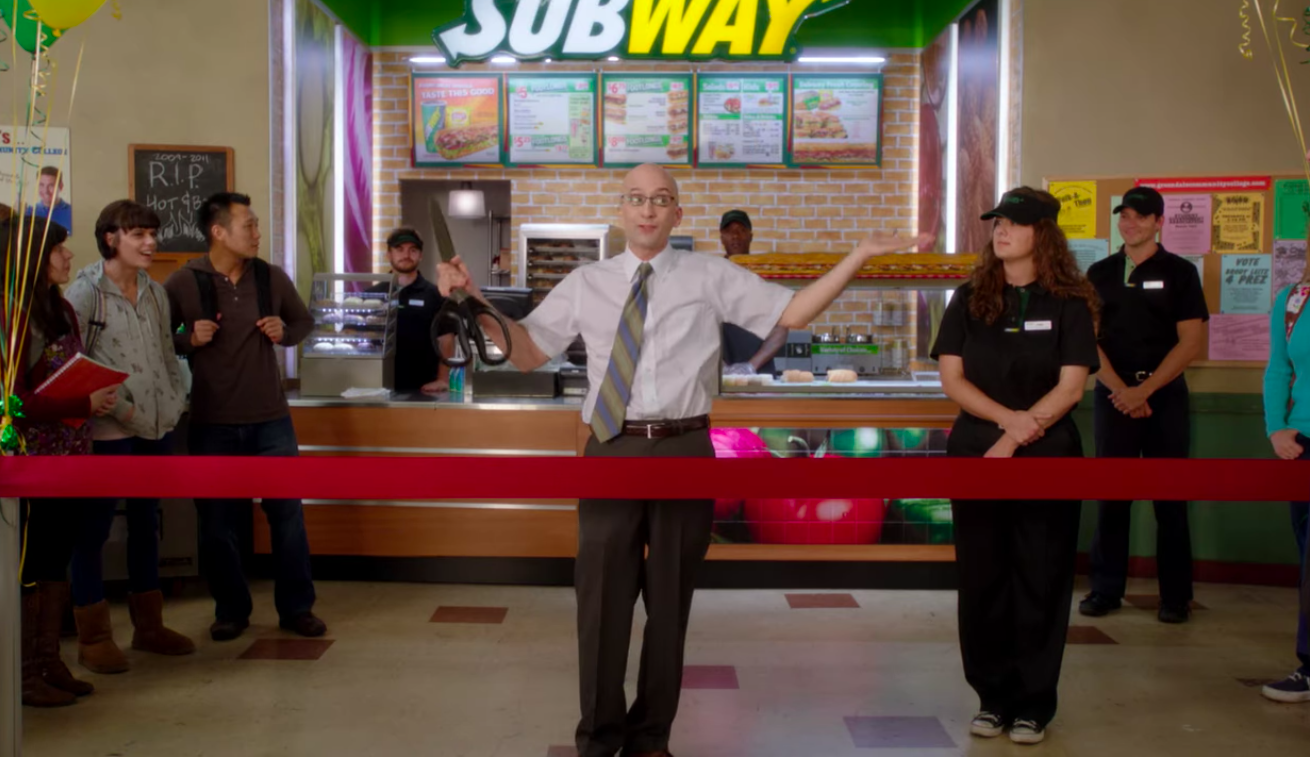 From Texaco Star Theater, to The Walking Dead and its extensive use of Hyundai cars, product integration is as much a part of our media landscape as any classic plot trope. Inserting branded products into television programs helps to cover production costs, and writers often have some degree of freedom to figure out how they are applied to the story. There is a particular phenomenon in some modern sitcoms in which characters reference, in varying degrees of subtlety, that they are selling a product.

Here’s an example. In the season 3 New Girl (Fox, 2011-2018) episode “Prince,” Coach (Damon Wayans Jr.) raves about his Ford Fusion, to which his friends respond, “Shut up! It’s all you’ve been talking about the whole drive and it’s weird.” This stands in stark contrast to the episode “Models” a season earlier, in which Jess (Zooey Deschanel) fumbles her way around a rotating platform at a car show, cartoonishly incapable of walking in heels and operating the vehicle, all while a presenter extolls the features of the latest model of the Fusion.

The men of New Girl discussing the Fusion.

Product integration, which goes a step further than product placement by integrating the product into the dialogue or plot, has been identified as the more worthwhile advertising strategy. Effective integrations, according to Nielsen, combine three elements in order to “motivate, rather than annoy, consumers:” the show and sponsor being a “perfect match,” characters praising the brand, and an ad appearing at the following commercial break. [1] Tony Pace, a chief marketing officer at Subway, told Variety, “The classic product placement model is not where we are. Just having our logo is nice, but it’s not enough. We’d rather have some message communicated.”[2]

We see this reflected in Community (NBC, 2009-14; Yahoo! Screen, 2015), a show both known for pushing boundaries and joining the Subway integration craze in its third season. The sandwich chain takes on a significant role as the new restaurant in Greendale Community College’s cafeteria. Because the school’s bylaws state that any business operating on campus must be student-owned, the company enrolls an employee, legally named “Subway” and referred to as a “corpohumanoid.” (Season 3, Episode 13, “Digital Exploration of Interior Design.”) The character returns as himself in a season 6 Honda-sponsored episode, “Advanced Safety Features,” now a guerilla marketer for the automotive brand. That alone would be enough, but earlier in the episode, when learning about this tactic, Annie Edison (Allison Brie) says, “They can advertise things without you knowing? Is that legal? It sounds like brain-Windexing.”

It can be hard to tell what are references made by writers and what is product integration, and money does not always exchange hands. For example, in the famous 1993 Seinfeld episode “The Junior Mint,” the show’s creators struggled to find a brand that would allow them to use their candy to nearly kill a man. The Tootsie Roll company (which makes Junior Mints) agreed and received major exposure from the show as a result. In 2008, 30 Rock co-showrunner Robert Carlock told Emily Nussbaum that “In our 36 episodes, we’ve done product placement only three times…the vast majority of our references are actually creative decisions with no quid pro quo.” [3]

Tobias and Carl Weathers enjoying, and talking about enjoying, a meal at Burger King.

30 Rock (NBC, 2006-13) also made use of these types of jokes to fund their show. In the show’s fifth episode, NBC executive Jack Donaghy (Alec Baldwin) tells head writer Liz Lemon (Tina Fey) that they need to integrate GE products into her show. As Lemon is protesting compromising the integrity of the program, the show shoehorns in a Snapple ad.

Another example from the show occurs in the Season 2 episode “Somebody to Love.” Lemon says “Well, sure, that Verizon service is just unbeatable. If I saw a phone like that on TV, I would be like, ‘Where is my nearest retailer so I can get one?’” Fey then directly addresses the camera, “Can we have our money now?” [4]

However, these big swings can also have big consequences. The Dana Carvey Show (1996) planned to insert sponsors into the name of the show on a rotating basis, but after millions of angry viewers sent letters to the first sponsor, Taco Bell, in response to a particularly gross Bill Clinton sketch, the show lost most of its sponsorships and was subsequently cancelled a few episodes later. [5]

Due to a relatively small sample size and little research on the subject, there are no clear-cut answers about audience reactions to this phenomenon. Many find it amusing, but does making fun of products help sell them? Perhaps surprisingly to the skeptical viewers among us, audiences as a whole not only tolerate, but often actually like product placement in shows. [6] A 2010 study found that younger consumers reacted the most favorably to television product placement, engaging in additional product-related behaviors after watching television shows, perhaps providing a positive outlook for the next several decades of product integration. [7]

In addition, consumers in their 20s engage reflexively with TV product placement. They are both aware of its application and aware that they are “far from immune to its persuasive force.” In cases where the placement feels authentic and unobtrusive, it adds to the realism of the show and does not diminish the quality. [8]

Subliminal advertising has widely been deemed a failure, so clearly, the more explicit, the better, from the advertiser’s point of view. In that way, these self-aware product plugs may actually be more successful than a passing mention in a typical sitcom script, even if the product itself is the butt of the joke. The series which have employed these techniques tend to be heavily-rewatched cult favorites, further cementing the viewer’s relationship with the product even if they do not get the ad-break commercial afterward to double down.

Even so, this advertising model is far from the norm. Many more traditional-type sitcoms, like Modern Family (ABC, 2009-20), feature a more familiar form of product integration. One of the show’s many references to Toyota takes place when matriarch Claire Dunphy (Julie Bowen) talks to her husband through her car’s Bluetooth speaker. When he references their Valentine’s Day date the night before, she responds, “Remember the salesman told us the Sienna was built with the whole family in mind? Well, the whole family just heard that.” (Season 1, Episode 15, “My Funky Valentine.”)

Readers may notice that the most recent of these examples is still eight years old. Advertisers are constantly a step ahead of the consumer and trends in comedy are constantly evolving, so it is difficult to say what accounts for this. As streaming platforms continue to take precedence and network sitcoms struggle for views, it may no longer be worth the risk for advertisers to allow shows to treat their products as a joke. More research is needed in this area in order to provide more definitive answers, but trends indicate that we may see a move back toward more traditional forms of product integration in network sitcoms. This final example may be the best illustration of this changing tide.

One of the most often referenced examples of self-aware product integration is in Penelope Spheeris’ 1992 movie Wayne’s World. When Wayne (Mike Myers) and Garth (Dana Carvey) are approached by producer Benjamin Kane (Rob Lowe) about putting sponsors on their show, Wayne tells him that he “will not bow down to any sponsor” and that he refuses to sell out, all while speaking directly to camera and prominently displaying brand-name products from Pizza Hut, Doritos, and Pepsi, among others.

However, in 2021, Mike Myers and Dana Carvey are appearing, again, in character, to shill for UberEats in a series of ads that are decidedly not ironic. Somewhere in the past three decades, they stopped being in on the joke and became the butt of it themselves.