THE EUROPEAN SUPER LEAGUE: DISRUPTION IN FOOTBALL AND TELEVISION
KATHRYN HARTZELL / UNIVERSITY OF TEXAS AT AUSTIN 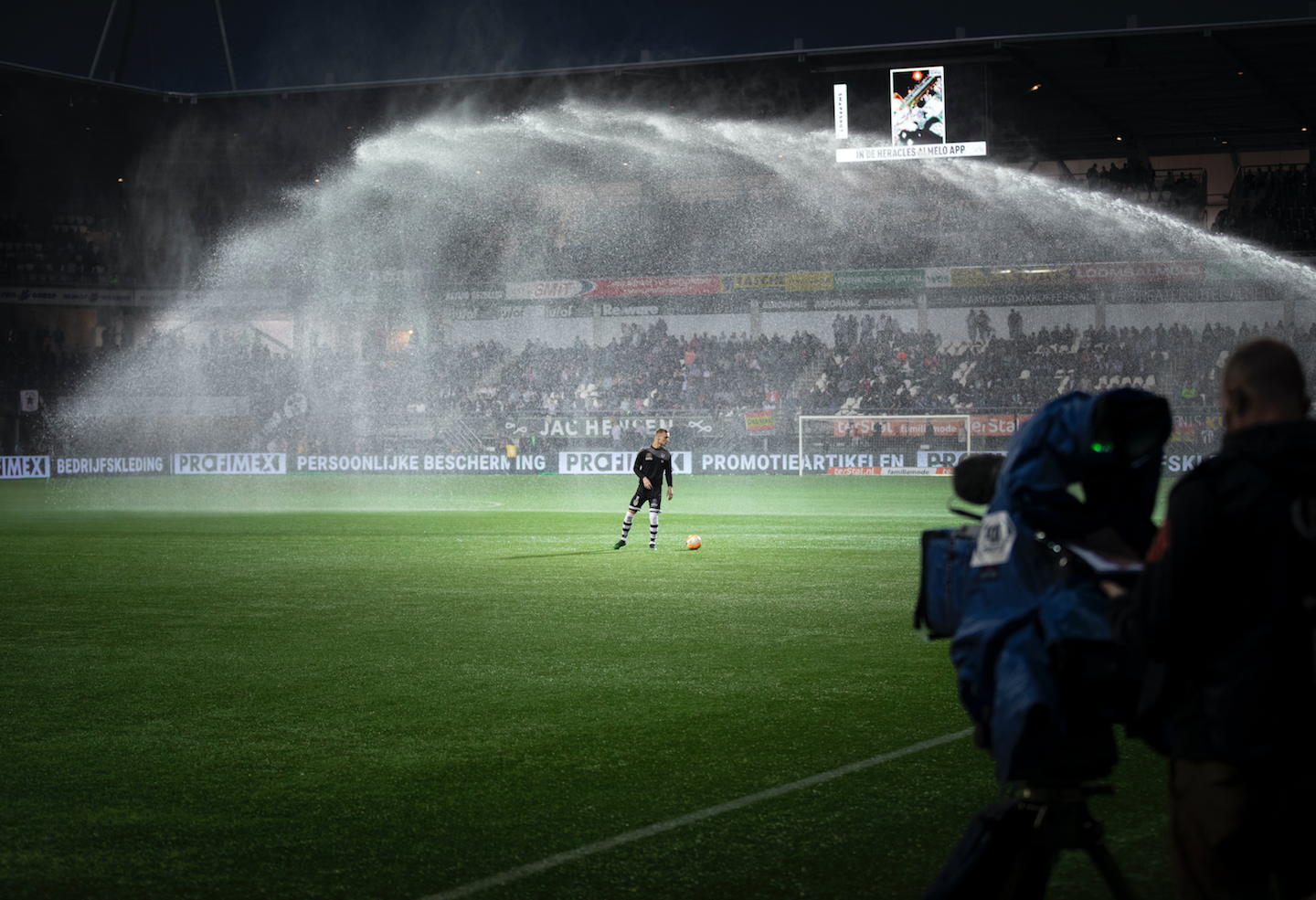 Football player under the lights by Maxim Hopman on Unsplash

In April 2021, twelve of Europe’s richest football clubs created a global uproar by attempting to found the European Super League (ESL). The coup collapsed within two days of the announcement due to near universal condemnation from fans, the media, politicians, players, managers, and even some sponsors. Fans protested in the streets and supporter organizations circulated messages condemning a move they viewed as antithetical to the values of football such a merit, aspiration, and community. Although foreign owners (particularly U.S. owners) received much of the blame, John Ellis makes the point that the ESL was the “logical culmination” of television’s influence on football.[1] European football’s interest in cultivating affluent global audiences and partnering with transnational streaming video on demand (SVOD) services spurred owners to create an even greater television spectacle out of one of the most popular sports in the world.

Chelsea fans celebrate their club’s withdrawal from the ESL

Club owners have been discussing the possibility of a European football league for decades. Increased globalization beginning in the late 1980s across Appadurai’s five scapes, Paul Martin argues, resulted in the “Europeanization” of football.[2] Advances in media technology which allowed matches to be televised simultaneously across territories, international sponsorship and club ownership, increased movement of players, management, and staff across national borders, the growth in transnational football institutions and regulations, and the popularity of the UEFA Champion’s League, helped create a European football identity. European football did not supersede national affiliations, but linked them together. In 1998, a survey by MORI of 1,061 football fans reported 70% were in favor of a European Super League with young fans especially expressing interest in “elite club” matches.[3] Despite this apparent support for a new league, no clubs attempted to break away from the current system until 2021 when COVID-19 and stagnating broadcast revenue inspired twelve wealthy clubs in England, Spain, and Italy to drastically reimagine European football.

The global pandemic and the temporary shuttering of stadiums worldwide exacerbated financial problems which had already been growing in recent years. In short, the richest football clubs in the world were struggling to maintain their balance sheets, with heavy amounts of debt taken on to build new stadiums and sign and pay expensive players. Rather than see these expenditures as exorbitant, club management normalized costs as part of the spectacle of modern football. In the joint statement by the founding ESL clubs circulated on April 18th, the new league described itself as the solution to “sustainability” issues. The key to balancing the books, according to the proposal, was television rights.

Breaking away from the traditional European football pyramid with its high-risk high-reward system of promotion and relegation, the new league planned to adopt a more U.S.-style model. While qualification for the current inter-European club tournament, UEFA’s Champions League, depends on domestic league standing at the end of the season, the founding ESL clubs would participate every year in this closed league, regardless of their performance domestically. Further, the ESL guaranteed the founding clubs a larger portion of revenue from television rights than they currently receive from the Champions League. The “headline fixtures” between globally recognized clubs with celebrity players would allow the ESL to charge broadcast[4] partners higher fees for television rights. The ESL’s founders promised the new league would deliver a premium entertainment compared to the domestic leagues, which are filled with smaller clubs with limited transnational appeal.

In forming the ESL, clubs distinguished between the desires of local fans, who purchase match-day tickets and make up the domestic television audience, and the assumed desires of young global fans, valuing the latter more highly. Dan Roan, a journalist for the BBC, reported that “According to a source, some of those involved in ESL call traditional supporters of clubs ‘legacy fans’ while they are focused instead on the ‘fans of the future’ who want superstar names.” The ESL will give “fans and amateur players a regular flow of headline fixtures that will feed their passion for the game while providing them with engaging role models,” announced Italian club Juventus Chairman and ESL Vice President Andrea Agnelli in the formal press release announcing the league. Real Madrid President and ESL Chairman Florentino Pérez even went as far as to suggest matches might need to be shortened to make the games more interesting.[5]

The ESL project’s attempt to increase the spectacle of football and thereby increase revenues demonstrates the power of television to reshape sports. This relationship, however, is reciprocal: as Victoria Johnson and Garry Whannel demonstrate, sports have always had a dramatic influence on television’s industrial infrastructure, economics, technological developments, and aesthetics.[6][7] Football also played a vital role as television reinvented itself through different distribution technologies, beginning with broadcast and continuing on to satellite and today with SVODs. These changes in technology always resulted in changes to how the sport itself was played. In 1992, the clubs in the top tier of the English football pyramid broke away to form the English Premier League. This new league controlled their television rights with fewer financial commitments to the greater English Football League. Further, upstart satellite channel BSkyB outbid terrestrial broadcaster ITV for the coveted broadcast rights. The move not only helped News Corp make its satellite holdings profitable, but made the Premier League the richest football league in the world.[8] The large increases in funds allowed the Premier League to sign talented footballers from all over the world and television turned them into celebrities with remarkable global appeal.[9] Today, the Premier League earns significantly more revenue than the other European domestic leagues, predominately because of broadcasting,[10] and a 2017 report found international footballers accounted for nearly 70% of Premier League players.

Sky not only carried the Premier League to the UK, but it carried live matches around the world. Rupert Murdoch saw in football a powerful tool that could act as a “battering ram” to enter new markets.[11] Other satellite and cable networks worldwide also began carrying European football in order to distinguish themselves in a competitive market. Deborah Jaramillo describes NBC Sports Network’s acquisition of EPL rights in 2013 as part of its attempt to attract a “quality” audience to its new cable channel.[12] Currently, SVOD services continue the trend of using European football rights to build audiences and add value to their services. In the UK, Amazon’s acquisition of Premier League rights courts the domestic audience as does DAZN’s rights deal for Serie A in Italy. Internationally, NBC announced the shuttering of NBC Sports and plans to move more Premier League games to Peacock. The current owner of the Star Sports brand, Disney, includes Premier League matches on their Disney + Hotstar premium SVOD services in India. The transnational appeal of European football only continues to grow, with international revenue making up a larger proportion of league’s broadcast revenue.

Premier League CEO Richard Masters reported in 2019 that international Premier League rights for the three-year period ending in 2022 were worth $5.3 billion, up from $3.9 billion from the previous cycle.[13] According to Deloitte, the percentage of international rights revenue from Europe is now equaled by the Asian market. Of the geographic regions, Asia and the U.S. are considered the markets most likely to see growth and generate value for clubs.[14] The growing proportion of broadcast income from the global market realigns club’s commercial priorities away from local communities of fans and toward the global fanbase. Further, these areas of growth come at a time when domestic football rights values are stagnating if not depreciating. The Premier League, for example, allowed all current rights holders to roll their deals over beginning in 2022 and offered broadcasters the opportunity to bid for six year contracts in order to ensure stable revenue rather than risking the broadcast fees dropping.[15]

Global interest in Europe’s storied football clubs and fascination with superstar players, along with this slowdown in revenue growth for domestic television rights, fueled the creation of the ESL. However, football fans loudly rejected the Super League and were in fact supported in their protests by the current football broadcast rights holders. Responding to the possible devaluation of their very expensive stake in the current system, Sky Sports, BT Sport, NBC Sports and others allowed their pundits and reporters to stoke fan outrage and dedicated time and space across their television and social media channels to condemnation of the ESL. In the face of the terrible press, two possible television rights partners, DAZN and Amazon both denied their involvement in the project. It is worth wondering, however, what might have happened if the ESL had successfully negotiated television rights in advance of the announcement. With a partner willing to weather the initial wave of bad press and recrimination, the ESL might have gone the same route as the Premier League and become a commercial success (although whether it would have been good for football as a cultural form or for fans and players is another matter).

As transnational media corporations continue to battle in the “streaming wars” for global audiences, the ESL debacle reminds us that some of that battle is being waged within professional sports. At previous moments in television history, sports played a critical role in defining the brands of broadcasters and, later, attracting audiences to pay-tv cable and satellite channels. The ESL, along with the pandemic, revealed the extent to which media drives football clubs’ decision-making. The values of spectacle, superstars, and brands—all of which television coverage fosters—spurred a wild scheme designed to appeal to “fans of the future” who were presumed to be receptive to once again changing the game in order to create a higher quality television product. That the plan failed so dramatically signals the disconnect between how executives and audiences view sports and the ongoing struggle over the commoditization of football.