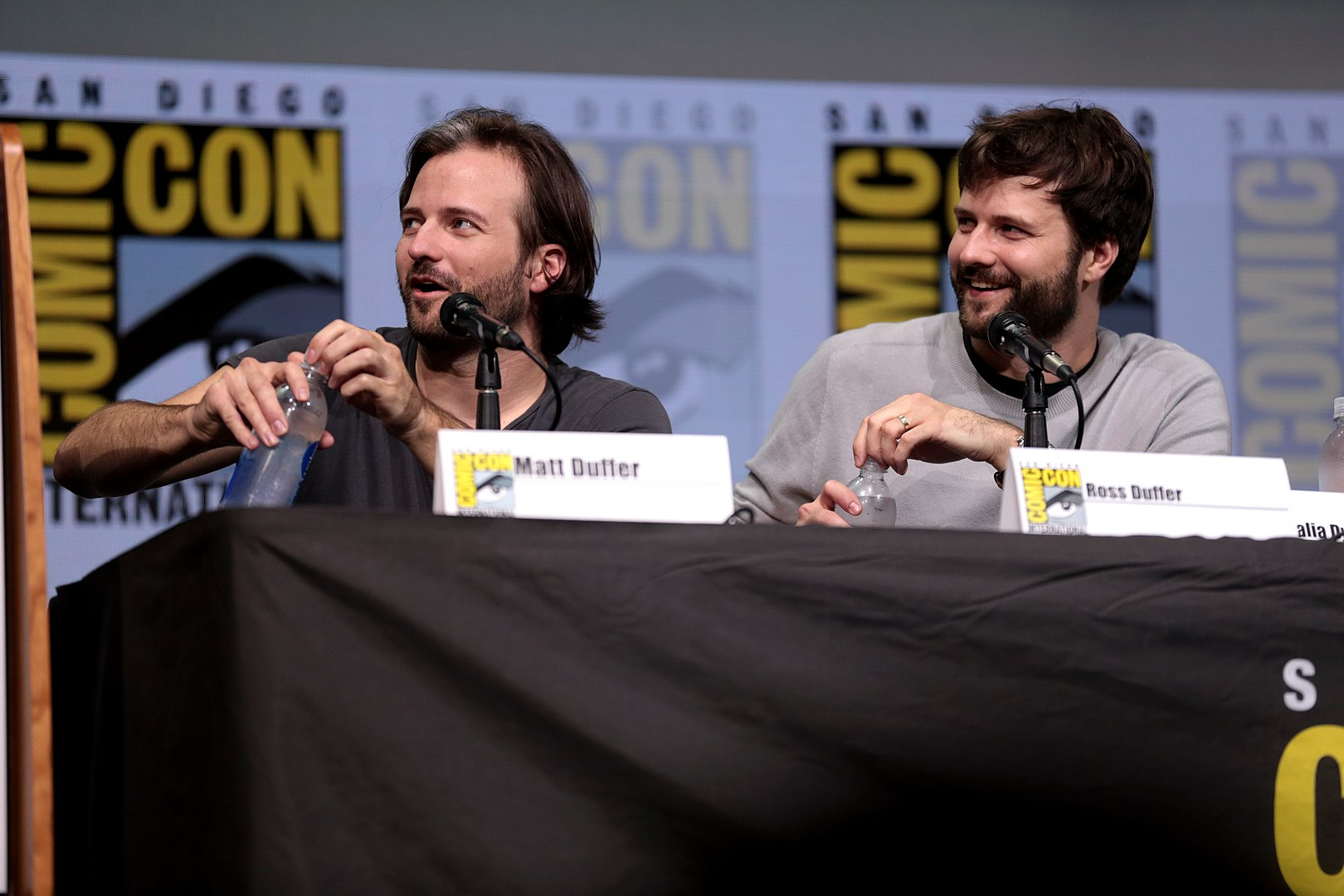 As many have discussed, part of the appeal of Netflix’s hit series Stranger Things (2016–present) is the series’ nostalgic depiction of 1980s small-town America.[1] Whether you enjoy it, are suspicious of it, or merely neutral, it’s impossible to avoid discussion of Stranger Things’ “authentic” nostalgia. However, especially in early reception of the series, there was one major stumbling block to designating the series an “authentically nostalgic” depiction of the 80s. The first season of Stranger Things is set in 1983 — and creators Matt and Ross Duffer, known professionally as the Duffer Brothers, were born in 1984. As one profile of the brothers puts it, “they’re sorta Nineties kids.” How can two “Nineties kids” produce an “authentic” recreation of the 80s? Without the ability to rely on lived experience of the period, the Duffers have positioned themselves as experts instead through their deep knowledge of the media of the era. In other words, they portray themselves as fans.

Increasingly, creators are coming to embody a particular type of authorial role that Suzanne Scott terms the “fanboy auteur.” Such creators are valuable because they are seen as uniquely able to straddle both their identity as fan and their position within the industry: “the fanboy auteur’s perceived ability to speak fans’ ‘language,’ and his liminal positioning (his ability to present himself simultaneously as one of ‘us’ and one of ‘them,’ consumer and producer), is framed as his greatest asset.”[2] Their deep knowledge of a particular franchise is understood as mastery, proving to both industry and audiences that they are a capable authorial figure. For audiences, a fan at the helm of a popular franchise signals a level of expected quality; from the industry’s perspective, someone who “speaks fan” is more likely to win fans’ trust, and thus will be able to guide fan interpretation and engagement through industrially-sanctioned modes.

This description is not meant to suggest that the “fanboy auteur” is an industrial fabrication cynically adopted by creators who aren’t actually fans of the properties they are involved in; as Scott points out, the genuine fandom of fanboy auteurs is what makes them so compelling.[3] However, understanding it as a role with industrial functions does illuminate why creators like the Duffer Brothers might lean on their own fan credentials as a legitimizing strategy, even when their situation doesn’t quite fit the prototypical “fanboy auteur” mode. First, the Duffers aren’t particularly involved in conversations with their fans in the way that Scott’s initial formulation of the role entails. Second, Stranger Things is technically an original work, meaning that there is no one specific text, property, or franchise for the Duffers to proclaim their fandom of. However, as the various case studies in Anastasia Salter and Mel Stanfill’s A Portrait of the Auteur as Fanboy: The Construction of Authorship in Transmedia Franchises[4] attest, the role and strategies of the fanboy auteur are flexible and can be utilized by a variety of fan/author figures.

It is important that the figure is called a fanboy auteur. “Fanboy” carries baggage; even as fan identity is becoming more mainstreamed (at least for certain kinds of fans and modes of fan engagement), the term still carries a somewhat infantilizing and derogatory connotation.[5] However, it remains true that for a variety of cultural and structural reasons, women rarely get to occupy this role, and those who do are often not branded as “fans” nor are their fan(girl) identities celebrated as a guarantee of quality.[6] Further, “fanboy” is associated with particularly gendered forms of fandom and fan activity, which I will return to in connection to the Duffer Brothers below.

While the Duffer Brothers don’t perfectly fit the mould of fanboy auteurs, it’s not a stretch to consider them “auteurs,” given the wealth of coverage around Stranger Things positioning them as the ultimate creative authorities. Even profiles like the “Spotlight” video above, which reveal how deeply collaborative a medium like television is, ultimately serve to reinforce the Duffer Brothers as the supreme authorial figures. And it’s not difficult to think of them as fans when they repeatedly and deliberately represent themselves as such in interviews and profiles.

Reviews of Stranger Things never fail to mention the series’ eighties pop culture referents, and the Duffers similarly love to name their influences in interviews. Especially in press from the first two or three years of the series’ run, the Duffer Brothers repeatedly present themselves as “obsessed” “movie nerds” by listing their favorite films and directors, pointing out specific visual and plot references, and generally displaying the kind of encyclopedic knowledge that characterizes fanboys and fanboy auteurs.

They love eighties media so much, in fact, that they are leery of “ruining” these texts through adaptation. In a 2016 interview, Matt Duffer responds to the question, “Were you guys happier doing homage or would you want to do a straightforward adaptation?” with:

[Adaptation] would make me nervous. I like that it’s our own original story that’s inspired by this stuff, but if we screw it up we’re not screwing up anybody else’s work. […] I would feel really nervous doing something, especially something like one of Stephen King’s classic books that meant a lot to me, because there would be nothing worse than screwing that up.

Disregarding, of course, that this quote follows a story about an early It adaptation pitch (which Warner Brothers rejected, leading some to posit that Stranger Things is a direct result of that rejection), here Matt Duffer positions himself and his brother as fans specifically by professing a belief in the inviolable sanctity of a Stephen King novel or Spielberg film. Almost paradoxically, Stranger Things is legitimated as homage through the Duffers’ assertion of the sanctity of these “original” texts.

However, in practice the distinction between affirmational and transformational practices is rarely so cut-and-dry. Take, for example, this description of how the Duffers pitched Stranger Things to Netflix:

They made a kind of “lookbook” filled with the films they were drawing on. “We took an old Stephen King book cover and had a lot of images from the movies that inspired us,” Ross explains. “We also made a fake trailer, where we took 30-something clips from movies. John Carpenter mashed up with ET was really cool. So that was where we started to figure out the tone of the show.”

Creating a pitch deck using materials from other media is a common practice in the film and television industry, so it’s noteworthy that this was considered special enough to be included in the profile. What sets these pitch materials apart is the fact that they were constructed from the same texts that the Duffers continually proclaim their fandom of. Further, the materials that they combine and juxtapose are not abandoned after this moment, but remain constitutive elements in the creation of their new text. In this sense, their fake trailer is more akin to remix video and transformational fanvidding[8] than to affirmational practices.

Stranger Things itself can also be understood as a kind of transformative work — a remix video that repeats, with just enough difference, the visual and narrative tropes of the corpus of 80s media that the Duffer Brothers admire and want to replicate. In doing so, it becomes not derivative of, but another entry in, the “archive” of American 80s media from which the series extracts, reworks, and recombines elements.[9] This is not to suggest that Stranger Things is worth less due to its borrowing or reworking, nor to diminish the work and creative efforts that go into a series like this. As any fan creator will tell you, transformational works require considerable creative labour. However, this does point us to perennial questions around who is able to successfully adopt a fan creator identity in their pursuit of professionalization, and what practices are considered acceptable by industry and audiences alike.

Enabled by their race and gender, the Duffer Brothers can adopt “fanboy auteur” strategies as part of their professional self-branding, and successfully narrativize their fanboy identities in order to justify their creation of an “authentic” text. The power of the fanboy auteur role is such that the Duffer Brothers can engage in transformational practices more usually associated with fangirls without any loss of legitimacy (and are even celebrated for doing so). By contrast, creators who are not white, heterosexual males generally remain unable to access the legitimacy and power that comes with the fanboy auteur role regardless of the kinds of fan practices they engage in. Further, the “authenticity” of Stranger Things is based on its relationship to a collection of media texts that were themselves produced by creators with a narrow range of identities, and represent a limited experience of the time and place. We need to remain aware, and critical, of who is able to create from positions of power like the “fanboy auteur,” as that determines whose stories get told and retold, whose experiences are centred and recentred, and who continues to be written out.