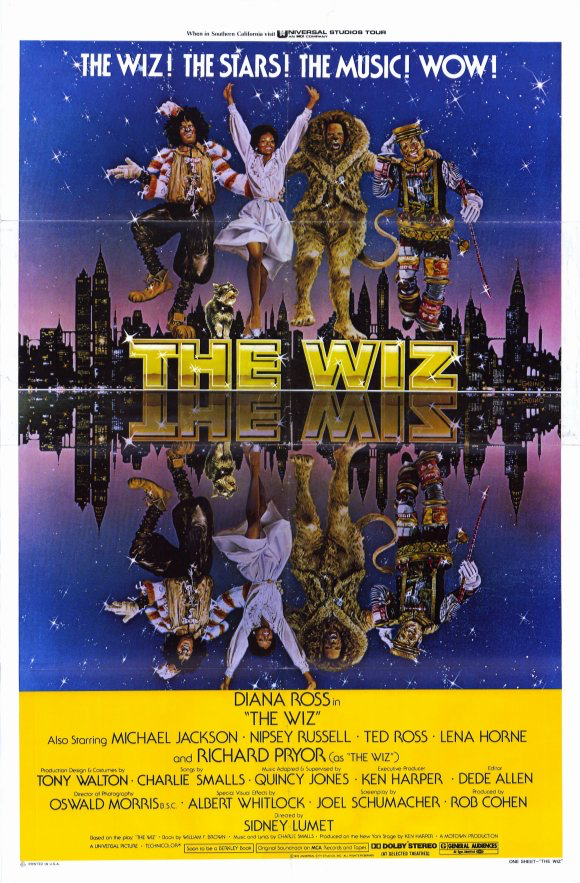 Film poster for The Wiz (1978) featuring the principal cast.

In the late 1970s, producer Ken Harper dreamed of taking his hit Tony Award-winning Broadway musical The Wiz to the big screen, but not as a (relatively) cheaply made Black-cast film like Sounder (1972, dir. Martin Ritt) with a $1.9mm budget, Claudine (1974, dir. John Berry) with a $1.1mm budget, or Norman, is that You? (1976, dir. George Schlatter) with a $1mm budget. On the one hand, while these films are outside the Blaxploitation cycle in terms of the themes they cover, their budgets were in line with the budgets being afforded Blaxploitation fare. Thus, Harper’s wish to produce a screen adaptation of The Wiz with a budget well in excess of $1mm, demonstrates how few resources had historically been committed to Black-cast media. Thus, when Warner Bros. briefly considered producing The Wiz (1978 dir. Sidney Lumet), Warren Lieberfarb, the company’s vice president of marketing, positioned the film’s Black audience as surplus writing in an internal memo, “The preferable route . . . would be to cast the property with known stars in principal roles and cameos. This would dramatically increase audience want-to-see, lower the possibility that it would be perceived as a Black picture and probably improve negotiable terms with exhibitors.” In Lieberfarb’s imagination, (Warner Bros. ultimately let its option to produce the film expire) The Wiz needed to avoid being understood as a film for Black audiences. Thus, Blackness and Black audiences were surplus. 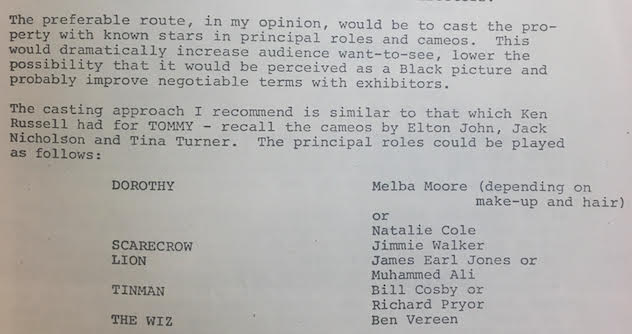 Excerpt from Warner Bros. memo discussing casting for The Wiz (from the Schomburg Center for Research in Black Culture).

Building on Marx’s theorization of surplus value as an economic concept, this short essay theorizes what I am calling surplus Blackness. It cannot be denied that in Marxist thought, surplus value is always considered “good.”  Surplus value is at the heart of capitalism in its extraction of surplus value from labor(ers) and deliverance to capitalists. The culture industries are built on the idea of surplus value: films, television programs, music and video games are all supposed to generate value that exceeds the cost of labor and production. However, I want to use surplus to think through how value is extracted from Blackness. Surplus Blackness hinges on the idea that Black audiences are rarely explicitly courted as anything other than a value-added audience for a project (or set of projects) designed for broader, mainstream (read: white) appeal. I want to suggest here that Blackness is never considered enough on its own. As Herman Gray (2005) details, Black programming, whether films or television series, become part of a media conglomerate’s “overall marketing and branding strategy, a strategy and ideal demographic that in all likelihood does not include Black people as a prime market” (pp. 84). In this short essay, I want to use three examples to demonstrate how surplus Blackness functions within the culture industries: 1) the Fox Network’s 1980s and 1990s engagement with Black audiences, 2) the Black-cast blockbuster Black Panther (2018, dir. Ryan Coogler) and 3) Netflix’s acquisition of “classic” Black-cast sitcoms.

At the dawn of the post-network era, networks increasingly turned to narrowcasting, multicasting and dualcasting as strategies to engage smaller niche audiences, rather than seeking the proverbial “everybody” under the network era model of broadcasting. Kristal Brent Zook (1999) detailed Fox’s strategy to use Black-cast programming to simultaneously draw Black viewers and “hip” white adolescent men whose love of commodified hip hop drew them to series like In Living Color (1990-1994) and whose “coolness” drew them to The Simpsons (1989- present). That white audience became the valuable commodity for Fox when it, in 1994, purchased the broadcast rights to Sunday Night NFL and quickly began dumping its Black-cast programming. Thus, surplus Blackness partly engages and commodifies Blackness in ways that position it as both universal enough for the desired (white) demographic target and specific enough to hail Black viewers. As I detail in my book (2021),when UPN deployed Blackness, the network’s Black-cast sitcoms were segregated onto a single night of programming, thus ensuring the relative whiteness of its other six nights of programming (series like Moesha (1996-2001), the network’s first bonafide hit, was one of the few Black-cast sitcom outliers; and because of its success, it was mostly used to create an audience for white-/multicultural-cast sitcoms like Clueless, ABC, 1996-1997, UPN, 1997-1999).

One of the other components of surplus Blackness is its engagement with Black precarity. The media industries frequently have industrial amnesia with respect to Black-cast successes (particularly big budget projects) but remember Black-cast failures for decades. For a blockbuster film like Black Panther, Black spectators were considered surplus to the target Marvel audience. For example, while undoubtedly some Black folks were watching, the film’s first trailer aired during the NBA Finals. And the announcement of the film’s ticket pre-sale was somewhat similarly announced in a national ad during the College Football Playoff National Championship on January 8, 2018. It cannot be denied that with a $200 million budget (excluding marketing costs), Black Panther could not afford to be catered to a niche Black audience. However, as the first Black superhero film, Black audiences were largely treated as surplus because the media industries relied on what I have elsewhere called must-see Blackness. Must-see Blackness is a mechanism for understanding Black audience’s imperative to consume Black-cast content to stave off the possibility that the Black-cast media content will financially under perform. Must-see Blackness suggests that if Black audiences do not support Black-cast content, then the media industries will disinvest in such content in the future, often for decades to come. For example, after The Wiz’s “failure” in 1978, the next big budget Black-cast film was Coming to America—10 years later (and even Coming to America’s $36mm budget was less than The Wiz’s inflation-adjusted $42.4mm budget).

The third, and final component of surplus Blackness I want to explore here is related to the notion that streaming platforms were supposed to provide additional opportunities to tell Black stories. To be sure, there have been some Black stories being told on these platforms. But I am most struck by Netflix’s acquisition of “classic” Black-cast sitcoms like Moesha, Half & Half and Girlfriends, among others. I do not want to elide that some Black viewers have continued to find pleasure in revisiting these Black-cast sitcoms. However, the acquisition of these series, like Derek Kompare (2006) argues about the acquisition of syndicated content, is far less expensive than producing or partnering to create new content. Shonda Rhimes, with her colorblind approach to casting and writing, attracts a cross-section of viewers including Black women who, as Kristen Warner (2015) argues, fill-in-the-blanks around Rhimes’ Black female characters. However, a series like Half & Half has very little, if any, crossover white audience. So, Rhimes, because she could principally reach white women alongside a surplus Black female audience, could enter a Netflix deal worth $150mm to produce content while shows that specifically appealed to Black audiences and Black nostalgia were acquired for far less—a writer for one of the acquired shows told me they received a check for about $200. Thus, in engaging with Black audiences as surplus, Netflix could acquire pre-existing content cheaply and presumably also gain Black subscribers – or put another way, Netflix invested in a Black past (that harkened back to some of the same logics Fox and UPN used in the 1990s) rather than necessarily a Black televisual future.

Surplus Blackness is what happens in a fundamentally racist world in which Blackness is considered ancillary. When Blackness is devalued in American public life (see George Floyd, Sandra Bland, Breonna Taylor, Patrick Lynn Warren Sr., and countless other Black folks murdered by police with very little, if any, accountability), it stands to reason that that devaluation carries into the culture industries. The cost per thousand to reach Black viewers for commercial networks and channels is far less expensive than reaching similarly situated white viewers. Channels and networks can extract less revenue from television content designed to reach only Black viewers. Although film industries recognize the Pavlovian response Black viewers often have to “being seen,” for big budget fare like Black Panther and The Wiz, Blackness is never enough to justify large budgets (Girls Trip had an estimated $20mm budget). The catch-22 of surplus Blackness is rooted in Black spectatorship’s accountability for/to Black media production. That is, Black media productions, particularly those with high budgets and production values, are used as test cases wherein a failure to exceed financial expectations signals a lack of appetite for Black-cast fare (see: The Wiz and WGN America’s Underground). Put another way, when the culture industries produce a text with Black audiences imagined as secondary consumers, when the text underperforms, the “blame” for its failure is placed on those Black consumers for whom the text was never imagined. The culture industry’s use of surplus Blackness extracts value from Blackness, but never necessarily invests in Blackness.