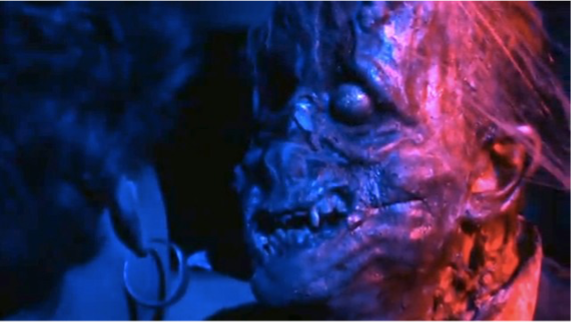 Horror, like many other genres, is well known for its auteurs. If you want zombies, you can turn to George Romero. If you want body horror, then watch some David Cronenberg or Lucio Fulci. When discussing Latinx and Latin American horror the conversation revolves around a few directors. Particularly, one name always comes up first, Guillermo del Toro. In this column, I think through the work of this auteur centering the question: what is the relationship between the U.S. and Latin America when it comes to Latinx horror films?

From Mexico to the World:

Guillermo del Toro was born in Guadalajara Jalisco, Mexico in 1964. He worked as a makeup artist, created a few shorts, and even produced a feature film, Doña Herlinda y su Hijo in 1985. However, he reached the attention of the world, and most importantly U.S. producers, with the release of his feature length movie Cronos (1993). After Cronos, del Toro has gone on to direct a variety of films from different genres and in different languages. His filmography includes the poorly received giant bug movie Mimic (1997) and big budget action movies like Hellboy (2004) and Pacific Rim (2013). Unlike his other films, The Devil’s Backbone (2001) and Pan’s Labyrinth (2006) were filmed in Spain and are in Spanish. Both center the experiences of children, a little boy and little girl respectively, during the Spanish Civil War.

Truth be told, as a fan and an academic, I have an ambivalent relationship with del Toro and his work. As a fan, his work isn’t my go-to horror, I prefer bloodier. As a scholar, I always come back to the question, what makes a director who was born in Mexico and has never directed a movie about Latinxs an icon of Latinx horror? To broaden that question, what are the parameters of Latinx horror films? 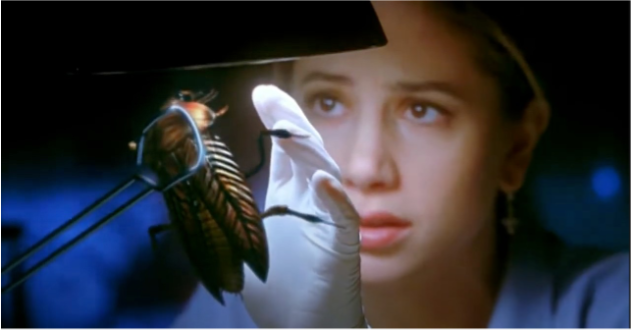 Still from Mimic (1997). Here we see one of the motifs in del Toro’s filmography, bugs.

According to Henry Puente, mainstream Latinx film is constructed based on production, distribution, and reception. He defines Latinx film as a text that has a Latinx or Latin American centered storyline with Latinx and Latin American actors and producers (this could be a writer, director, and/or producer). Further, the producers must be recognizable by the Latinx community.[1] The film should be marketed to a Latinx and/or Latin American audience and must be dubbed or subtitled, if not in Spanish already. Finally, Puente argues that to be defined as such, the product must be labeled as a “Latino film” by the “mainstream or the Latino-oriented media” and acknowledged by “Latino advocacy groups like Nosotros or the National Council of La Raza…in their award ceremon[ies].”[2] As we can see, Puente points to the transnational nature of Latinx film. A genre that consistently travels between Latin American and  the U.S.

Latinx film is connected to numerous industrial histories and limitations. The work of Guillermo del Toro, and Latinx horror films broadly, must be read through a lens that not only addresses these transnational demands of Latinx film but also weaves in the tropes and traditions of the horror genre.

I don’t mean this to be a prescriptive essay that delimits genre. When it comes to Latinx horror we are combining two hard to define and constantly contested categories, Latinx film and horror film. However, I do argue here that the ties between the U.S. and Latin America when it comes to horror must be considered. Latinx horror, as I presented in my previous column, is a transnational and multilingual genre from its inception.

Vampires seem to play an important role in watershed moments of Latinx horror beginning of course with Drácula/Dracula and opening up the 20th century with the release of del Toro’s Cronos. The film begins in 1536 Veracruz, where an alchemist creates a machine, the cronos, which can give people eternal life. In 1937 an earthquake kills the alchemist, but the cronos is lost. Decades later, the cronos is found by Jésus Gris in a guardian angel statue. As he plays with it, the machine pinches Gris, leading to unimaginable events that will change his life.

Unbeknownst to Gris, the cronos is a vampiric machine that keeps you alive but requires you feed on human blood. Further, wealthy and deathly ill businessman Dieter de la Guardia has his nephew and henchman Angel de la Guardia searching for it. A battle ensues between de la Guardia and Gris. In the end, Angel and Dieter die, while Gris decides to sacrifice himself so that his granddaughter Aurora can survive. 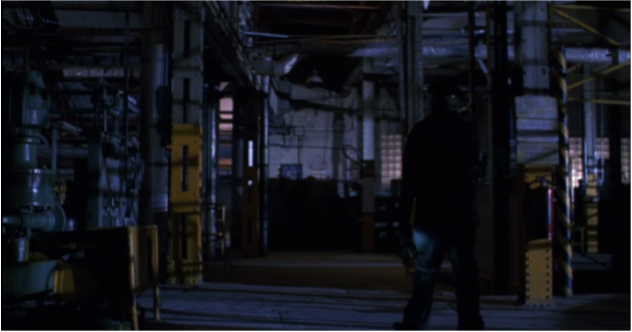 Still from Cronos (1993), where we see De la Guardia’s empty yet guarded factory.

The film is rich in its imagery and story, but rather than doing a textual analysis I would like to spend some time thinking about how this film serves as an example of contemporary transnational Latinx horror films when it comes to themes of free trade and global media productions.

In numerous interviews, del Toro describes how Cronos is set in 1997 to reflect a “non-futuristic NAFTA Mexico.”[3] A Mexico already deeply affected by the parasitic relationship created with the signing and implementation of the North America Free Trade Agreement (NAFTA), which went into effect in 1994, a year after the film was released. The creation of maquiladoras on the border began with the Border Industrialization Program (BIP) in the 1960s. The idea of NAFTA was to open up the borders for products and trade while reducing tariffs between Canada, Mexico and the U.S. However, what ended up happening, as a lot of people predicted, is that there was a parasitic relationship between Mexico and the U.S., where the U.S. benefited from Mexican cheap labor without giving anything back. By the time NAFTA finally went into effect, the maquiladorization of Mexico had already begun affecting numerous agricultural businesses, which were forced to close down when they couldn’t compete with U.S. products that were flooding the Mexican market for cheaper. The maquiladoras along the border served as sirens for unemployed people living in other parts of Mexico, who left their lives behind to work for these new companies. By the late 90s many of the maquiladoras had left the country looking for even cheaper labor. This left many Mexicans without a job, without a home and with very few options. Many turned to the U.S. to find a job. Thus, we see this vampiric relationship play out in the film through Dieter and Angel de la Guardia, foreigners who had empty and decrepit factories in Mexico City, a strange foreshadowing of what was to come on the border.

This neoliberal arrangement, then, reshaped the everyday life of people everywhere in Mexico and in the U.S. Further, it had a direct impact on film production. Del Toro commented in an interview that as a result of NAFTA, Mexican culture suffered, as “we were raided and invaded by media companies and there was nothing to protect us.” So not only did it effect agriculture, but it effected businesses in general, including cultural productions like films.[4] Scholar Ignacio Sánchez Prado writes that post-1988, Mexican cinema was shaped by neoliberalism and experienced four major transformations: the decline of nationalism, the new focus on middle-class audiences, the redefinition of political cinema, and the impact of globalization.[5] Cronos is a film that did not fit the traditional ideas of Mexican cinema, so it did not receive funding from the state. Rather, del Toro used his savings and went into debt to pay for this film.

Cronos, in its production, distribution and text itself, is a transnational product shaped by neoliberalism and Guillermo del Toro’s love for Universal films and horror. 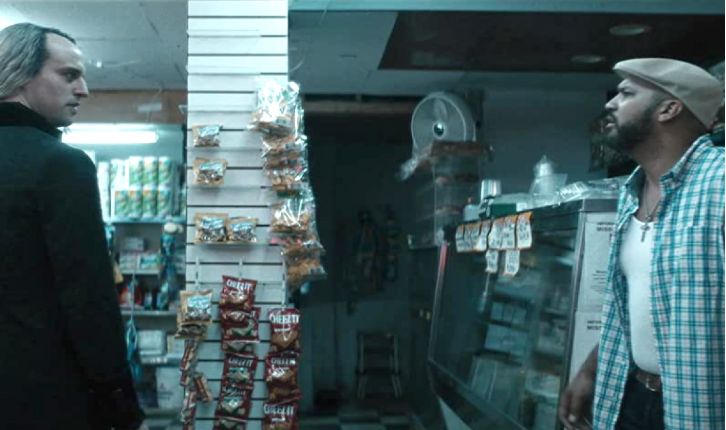 Thus far we have looked at Drácula, a U.S. production in Spanish with a Spanish and Latin American cast made on the cheap and Cronos, a Mexican production in Spanish and English with a Latin American and American cast. Both were influenced by European and U.S. horror and gothic traditions. What do these case studies tell us about Latinx horror films? I would argue that they show the complexities of the genre and the impossibilities of demarcating boundaries around it. The Latinx horror genre is created by multiple players including producers, distributors, directors, and audiences but also shaped by transnational and global forces.

I would like to conclude with one final example, a contemporary vampire tale, the 2020 Netflix film Vampires vs. the Bronx (Osmany Rodriguez). Set in the Bronx, the film follows a group of young friends who struggle to protect their neighborhood from encroaching gentrifiers that are buying out local business. The twist is that the real estate company Murnau Properties, who is pushing out local business owners, is run by literal vampires. It is difficult not to see the thematic similarities between this film and Cronos. Separated by almost two decades and a man-made border, both films use vampires as allegories for the real parasites: corporations. In my next column, I will expand on the way Latinx horror can and is used to name the real monsters that shape and unfortunately destroy the real lives of Latinx and Latin American communities.