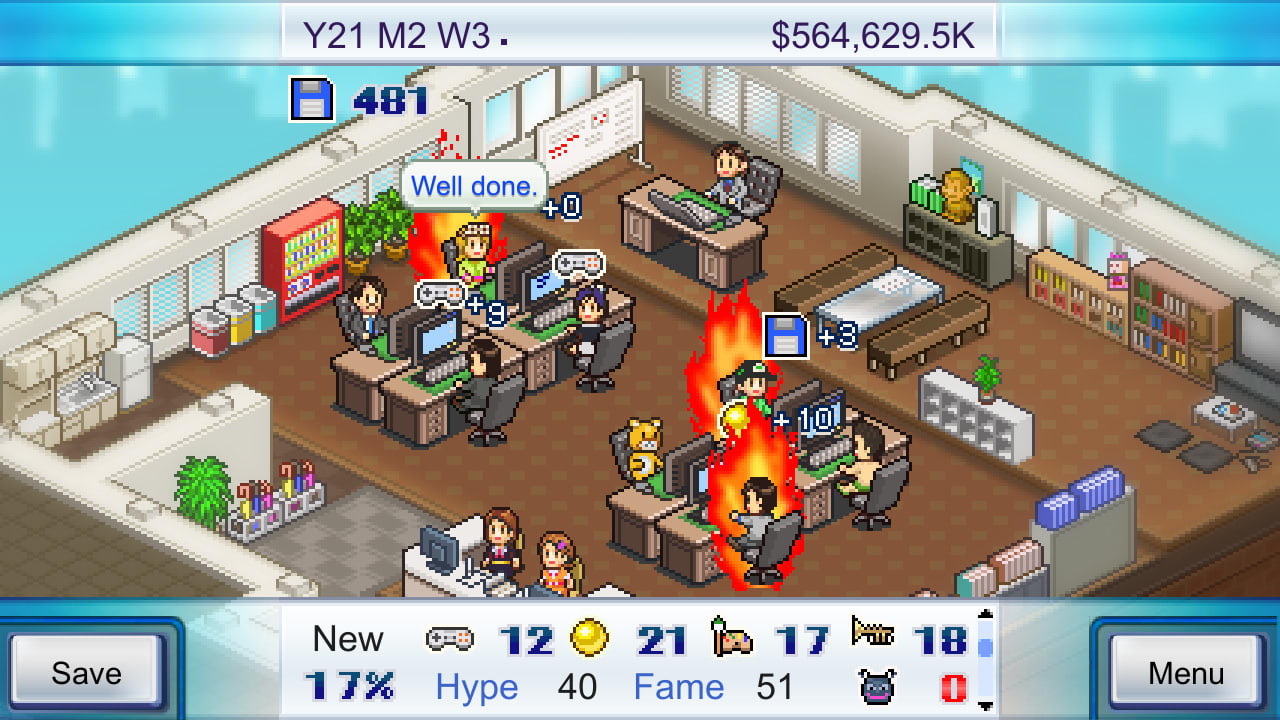 In Kairosoft’s Game Dev Story, developers burst into flames when they’re “on fire” and producing at a high rate, but we like this image to draw attention to the metaphorical flipside of being on fire—burning out. Image via Kairosoft and the Nintendo Switch Store.

If you follow the video game industry, you’ve likely heard about the disastrous launch of CD Projekt Red’s Cyberpunk 2077. Hyped as the game of the decade, Cyberpunk was delayed multiple times, and upon release was so technically unstable that Sony pulled it from the PlayStation store. More significantly for us as video game labor researchers, these issues occurred despite rumors that employees were “crunching”, or working excessive overtime, for more than a year. CDPR’s challenges, and dramatic loss of revenue, suggest that game developers cannot rely on crunch to complete their projects on time; crunch is unsustainable for workers, costly for developers, and may still leave players with a buggy product. But what is the alternative? 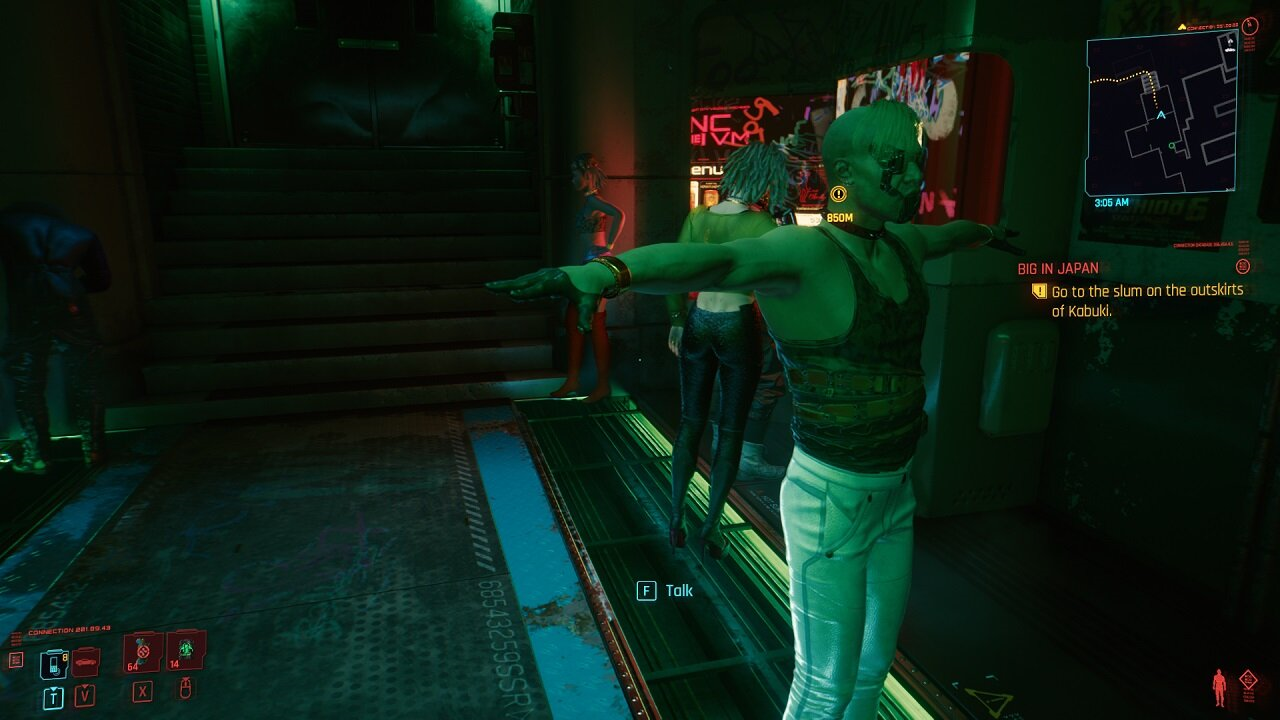 “T-posing”—character models snapping to this default stance—is one of the many bugs Cyberpunk players encounter. Image via Too Much Gaming.

Video game development is complicated; everything from non-disclosure agreements to developer/publisher relationships can interfere with the creation of manageable, sustainable labor practices.[1] Even the language developers use to describe their work can help crunch become taken-for-granted in the industry.[2] Our research reveals, however, that some studios have a historic commitment to crunchless game development and work-life balance.

What strategies do these studios put forth, how effective have they been, and why hasn’t the industry taken up their initiatives more widely? To address these questions, we analyzed articles and talks from Game Developer magazine and the annual Game Developers Conference (GDC). Our exploratory findings suggest that anti-crunch advocates often emerge from the game industry’s margins, where they work on smaller-scale projects for more casual audiences. Because of this, it is possible that their suggestions are not taken seriously by more central, AAA developers, who see their work as fundamentally different.

While the game industry has many quality of life advocates, this article focuses on Hank Howie, the former president of Blue Fang Games, and David Amor, founder and Creative Director at Relentless Software. Both wrote articles for Game Developer on work practices[3] and gave at least one GDC talk on the issue,[4] in addition to speaking about their management decisions in several other interviews. Howie also helped contribute to the International Game Developers Association’s first Quality of Life White Paper in 2004. Amor and Howie are useful examples to investigate as they were highly placed in their respective studios and therefore could institute their own recommendations, evaluate the results, and adjust accordingly. 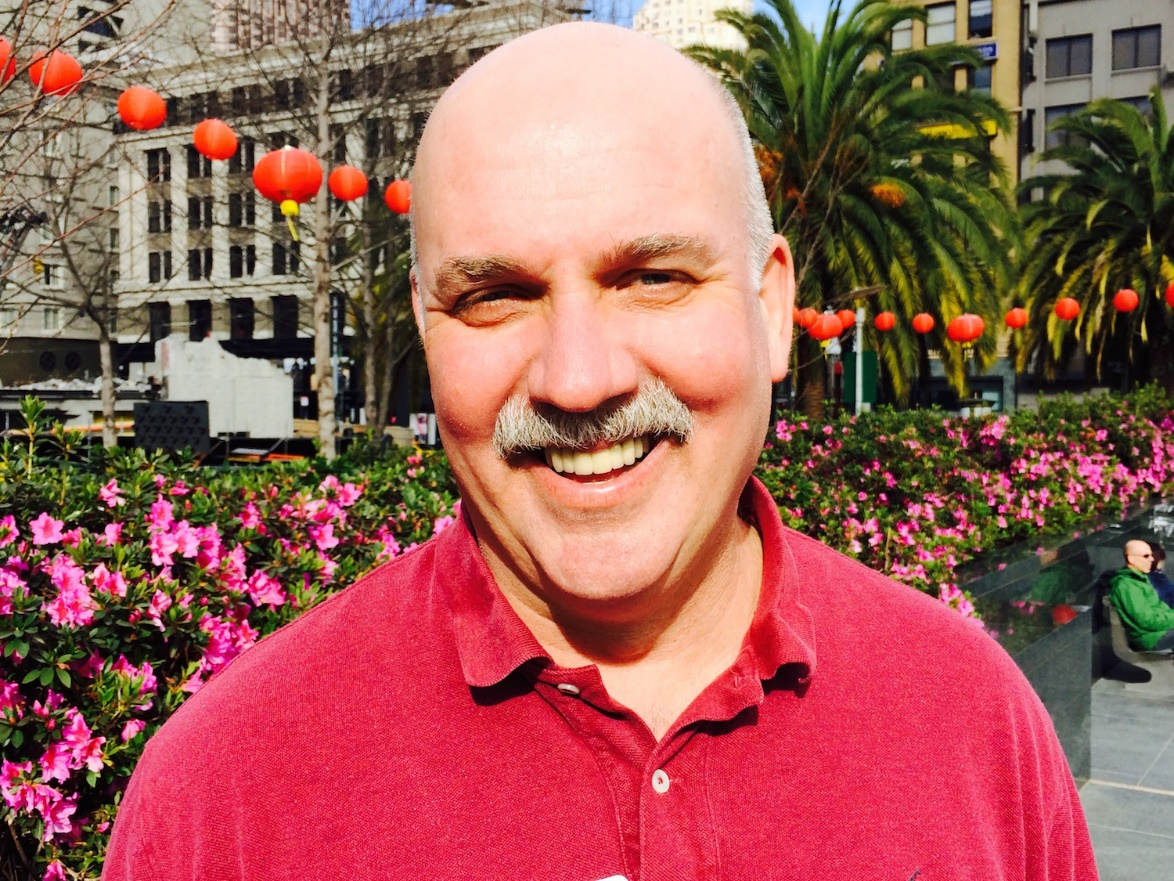 Both Howie and Amor recognized that avoiding crunch had to be a foundation for the development company; otherwise it would be “too easy to backslide into old habits.”[5] Amor was particularly committed to this as he felt crunch had contributed to his former employer’s collapse; he therefore wanted Relentless to be different. Both developers implemented organizational policies to promote work-life balance.

For instance, Blue Fang and Relentless expected employees to come in on time, work regular hours, and stay focused. Amor was stringent about this, requiring “everyone to be [in] at 9 a.m. exactly and expect[ing] work to start at five after. No exceptions.”[6] He also actively sent employees home at 5 p.m. Howie was less insistent on exact hours, but both developers emphasized the benefits of having all employees in at the same time, working in focused, productive ways. Relentless also tried to ensure focus by limiting the use of email, restricting internet access, and even having rules against recreational game play in the office. This was “a controversial policy in a games company,”[7] but Amor argued that guarding employees’ nights and weekends left them plenty of time for gaming outside of work. 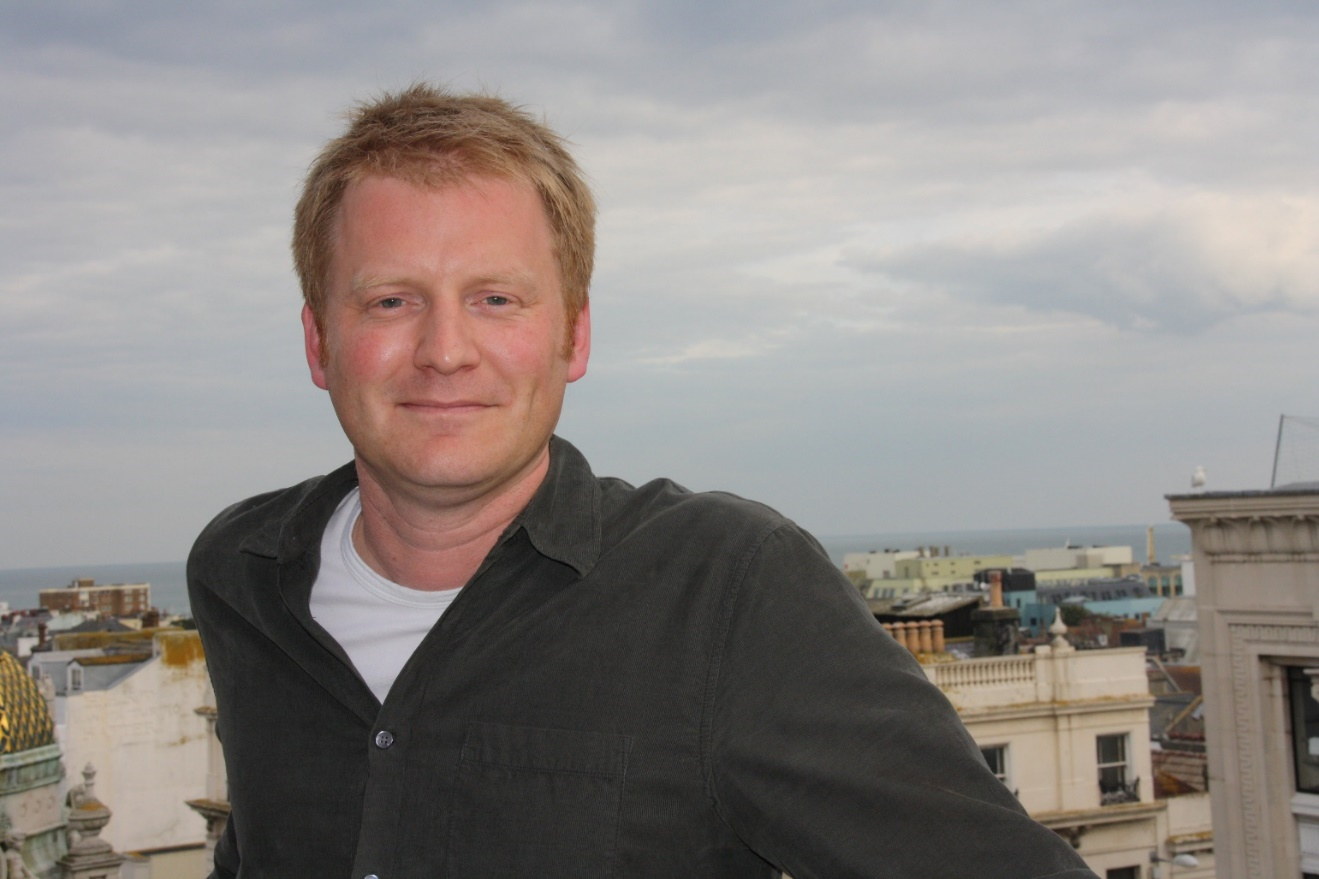 David Amor, pictured in 2011 for a roundtable discussion on the UK game industry. Image via Gamesindustry.biz author Dan Pearson.

The studios also emphasized the importance of project scheduling and maintaining positive relationships with publishers. Both Howie and Amor encouraged their teams to build in a “fudge factor”: a buffer of extra time, as high as 15-25%, that the team could draw on if emergencies happened and schedules slipped. They also insisted on communicating expectations clearly to publishers. Publishers control the budget for any given game development process, and pressure to meet their expectations can lead studios to crunch.[8] Amor and Howie, however, stressed how crunchless production let them deliver games on time, in budget, and to a high level of quality. This earned publishers’ trust and the freedom to schedule effectively.

Finally, Howie recognized that overtime was not the same as “crunch.” He elaborated: “It’s fairly widely recognized that workers can absorb a temporary 15 to 20 percent increase in their workload for short periods of time. We usually schedule one crunch week for each of the early and middle milestones, and two weeks per milestone during the closing stages.”[9] Employees put in approximately 48 hours per week in these crunch periods. In short, Blue Fang attempted to structure overtime to increase productivity without negatively affecting workers.[10]

Both Blue Fang Games and Relentless Software were successful studios. Despite games’ high turnover rate, each company lasted thirteen years, and their closures seem to be related to normal industrial shifts, such as casual games’ move to mobile over consoles, rather than labor issues. Further, the studios shipped numerous products: 20 games for Relentless (including their hit quiz series Buzz!), and 21 games/expansions for Blue Fang, which created the popular Zoo Tycoon series. 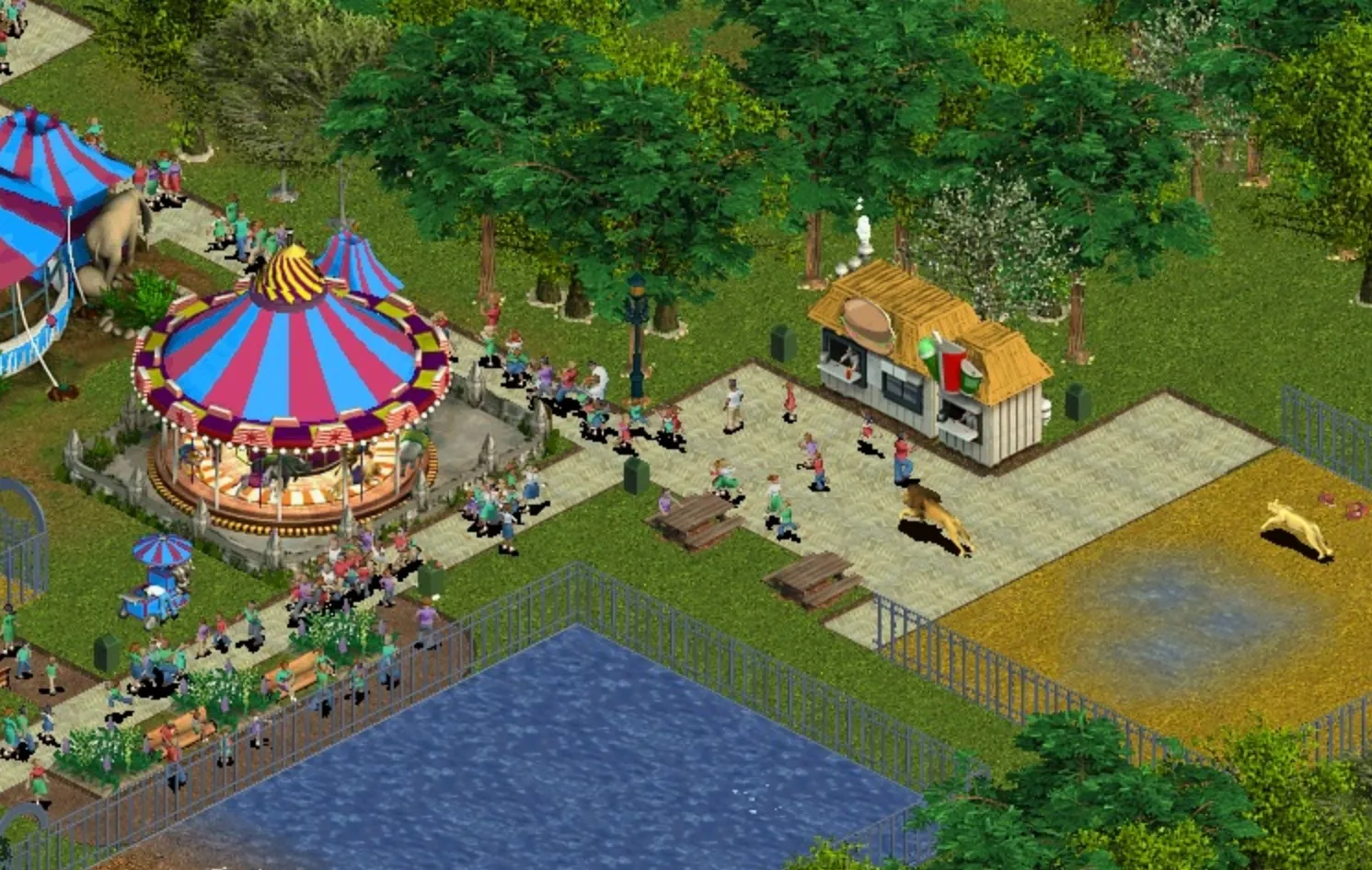 A screenshot from the original Zoo Tycoon (2001). Image via Microsoft and Polygon.

Additionally, Amor and Howie felt they successfully minimized crunch. While our textual analysis methods somewhat require us to take them at their word—as opposed to if we were interviewing them or their former employees—there is evidence that crunch was rare in either studio. Reviews on Glassdoor, where employees rate their workplaces, show that Blue Fang and Relentless largely avoided crunch. Positive comments about Blue Fang also still appear as counterexamples in articles about overtime. Finally, Howie was attentive to moments where his policies failed, as when the team worked 26 days straight on Zoo Tycoon 2. Following this crunch, Howie noted, “I’m more convinced than ever that we never want to be in that position again.”[11] These advocates were open about the challenges they faced in implementing their own recommendations but maintained strong commitments to avoiding crunch.

Even though Howie and Amor implemented useful anti-crunch measures within their companies, their ideas often faced pushback. Amor stated that others viewed Relentless’s policies as “totalitarian”, given their restrictions on working hours, internet access, and recreational gameplay at work. Both presenters also faced criticism during the Q&A sections of their GDC talks, especially around the idea of sending people home when they wanted to work late.[12] While Amor countered that letting people stay late can lead them to justify coming in late the next morning or to resent others they see as working less, this question’s persistence shows how crunch is taken for granted in the industry as an outcome of developer passion. Perhaps most revealingly, audiences quizzed both Amor and Howie about how applicable their policies could be across the industry. Amor was specifically asked how lessons from his company, which made small quiz games for the PlayStation, applied to more “core” development. In this question, we see the influence of a gaming culture that ranks some types of games and developers as more “real” than others. 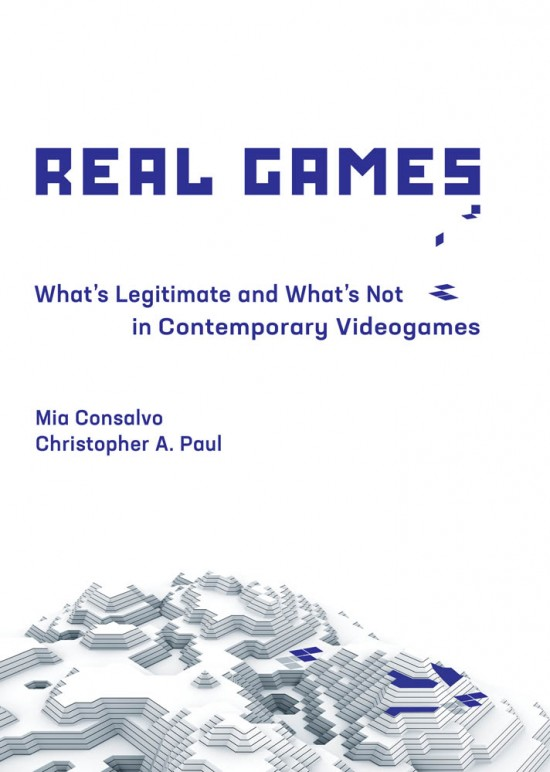 By using the term “real”, we are drawing on the work of Christopher Paul and Mia Consalvo, whose book Real Games performs a rhetorical analysis of game culture, production, and press to reveal gaming’s internal hierarchies. The authors argue that certain types of games—those that come from large studios with strong developer pedigrees or those that meet longstanding expectations for content, length, payment structure, and platform—set the standards for what qualifies as a game. Games that fit these categories are seen as more “real”—i.e. more legitimate and important—than games that don’t.

While Relentless and Blue Fang released many titles, these studios were smaller in scale and lacked AAA pedigrees. Furthermore, products like Buzz! and Zoo Tycoon were produced for mass audiences, including women and young children, and did not meet the standards of “realness” in terms of content, length, and difficulty. Finally, these games were low cost, and later titles were even distributed digitally as social or free-to-play offerings. All of these placed the games, and their producers, towards the margins of gaming hierarchies.

This suggests that while some companies have found strategies to prevent crunch, the perception of these studios as marginal or not “real” can lead core developers to dismiss their findings, questioning how applicable these policies are to larger teams or projects. Indeed, Amor named this as the most common reaction to his recommendations: “Making quiz games isn’t like making real games.”[13] This dismissal likely combines with the industry’s broader challenges—developer passion, the iron triangle, and games’ culture of secrecy—to lock in the existing system.

Unfortunately, crunch has many costs for workers, companies, and players. And recent events show it can even worsen a game’s underlying issues. As AAA development only grows more expensive and complicated, it is essential to develop labor practices that are sustainable, humane, and that produce good games. In this moment, can we ignore the paradigms offered by studios that produce games without crunch? As Amor points out, any game faces 95% of the same challenges, from dealing with technology and publishers to managing employees. Even if AAA does not reflect smaller-scale development exactly, many lessons can likely be extrapolated. The examples of Blue Fang, Relentless, and others suggest that with appropriate professionalization, scheduling, and office policies, the games industry can move away from crunch towards more sustainable, balanced labor practices and quality of life.