This was my WWE Network and Highspots and NJPW World and everything else back in the 90’s… pic.twitter.com/r1PujEB6kl

On August 27, 2018, wrestling fan Roy Lucier of Southern California, posted the above photo of his pro-wrestling VHS tape collection to his Twitter account @roylucier, explaining that this was his “WWE Network and Highspots and NJPW World and everything else back in the 90’s…” Highspots is an online retailer of wrestling merchandise, including DVDs of classic matches, New Japan Pro-Wrestling World (NJPW) is a subscription-based streaming service with live and on-demand Japanese wrestling matches. WWE Network is the subscription-based streaming service of the World Wrestling Entertainment company, and offers both original WWE wrestling matches and reality shows as well as an archive of wrestling content it has bought up from now defunct competitors. Lucier’s Twitter post gets at the role of VHS tapes in the unofficial distribution of televised professional wrestling matches in the 1980s and ‘90s, before online platforms provided access to wrestling TV.

This short essay for Flow is based on research for my book project about the cultural history of the unofficial distribution of radio and television in the twentieth century. It is fitting that I write this for a platform titled after Raymond Williams’ term “flow,” because my research challenges the way that Williams’ concept of flow has structured our understanding of broadcast history. Williams’ framework of broadcasting as “scheduled flow” has been a controlling paradigm for broadcast scholars since its publication in 1974.[1] The Sony Betamax was released one year after Williams outlined his argument that scheduled flow was the defining characteristic of broadcasting. And yet, audiences’ ability to record, circulate and replay broadcast content with home recording technologies has largely been ignored in academic broadcast histories.

Histories of network era television almost exclusively assume that television content was consumed during initial broadcast, and takes on the industrial imagination of the audience as docile adherents to schedule regimes. In contrast, my research demonstrates that moment of broadcast distribution is not an end point in a predetermined encoding/decoding model, but rather, the beginning of a much more nuanced process of media consumption, circulation and ongoing re-production. Here in this post, I use professional wrestling as a case study to demonstrate the significant role that tape trading played in wrestling television circulation, as well as in the formation of pro-wrestling fan communities.

The history of tape trading wrestling is indicative of professional wrestling’s distinct relationship with television in the United States. As an athletic endeavor, wrestling dates back to the Greek empire and was considered a serious and legitimate sport in the U.S. when was popularized by soldiers in Civil War training camps.[2] However, as wrestling became a prevalent sport during the gilded age, increased promotion and touring occurred during the same time that carnivals and vaudeville circuits emerged, and wrestling soon became integrated into these other forms of public entertainment. The emphasis on planned out theatrical performances, ongoing feuds and storylines, as well as matches that end with unexpected outcomes are all aspects of professional wrestling that can be traced back to the gilded age. This is also the point in which competing associations were formed and regions divided up among different promoters, a territorialism that defined televised wrestling until Ted Turner began airing Georgia Championship Wrestling to the country via satellite on WTCG (later WTBS) in 1976.

Professional wrestling has had an uneven relationship with television, tied to its perceived usefulness to TV producers.[3] Wrestling came to be a popular form of network programming in the late 1940s and early 1950s on both the DuMont network and NBC. Wrestling’s arena setting and mapped out theatricality made it an ideal sport for early television technology. However, NBC executives cancelled the wrestling programming in 1950, despite high ratings and a sponsor, in order to align the network brand with the quality of expensive dramatic anthologies.[4] DuMont would air wrestling until the collapse of the network in 1955. Once wrestling matches ceased to be aired on national television schedules, content shifted dramatically. Regional promoters started using taped studio matches, intercut with interviews, to hype up rivalries and publicize live events at large arenas. Wrestling promoters believed that airing matches held at large venues would decrease ticket revenue. Thus, televised wrestling became a decentralized, regional form of programming that varied not just by professional organization, such as the National Wrestling Association or World Wide Wrestling Federation, but even within these associations, from affiliated promoter to promoter. 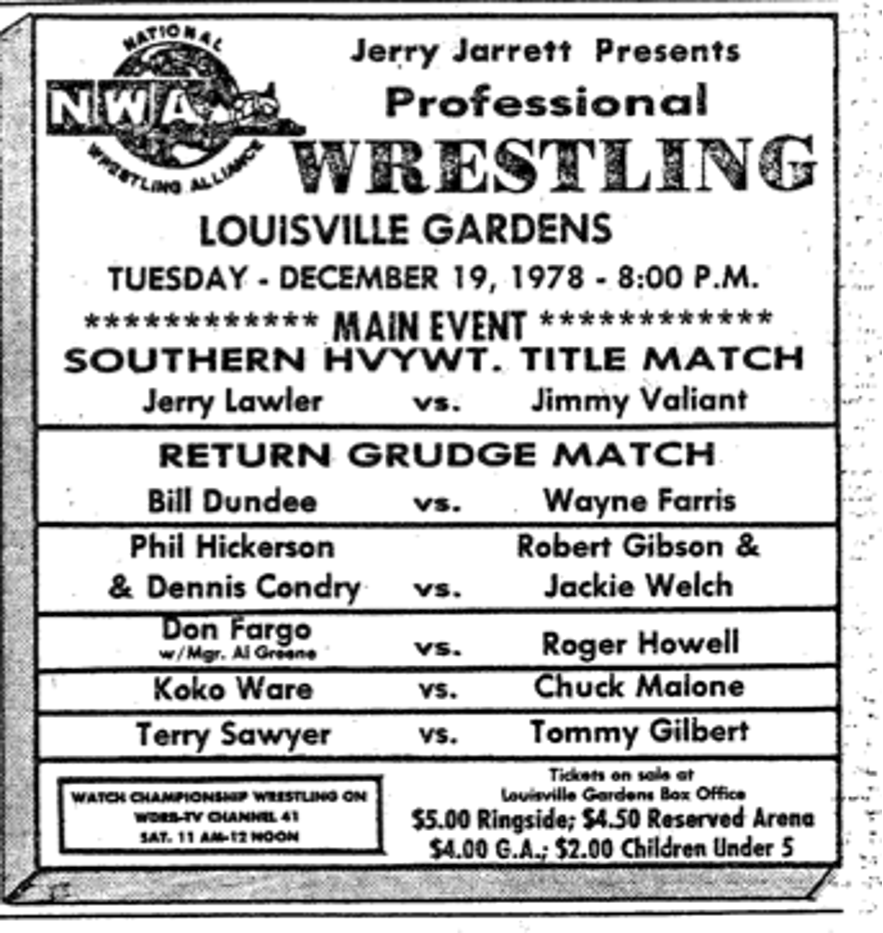 The newspaper ad above for a wrestling match in December 1978 demonstrates both the different players involved in wrestling events, as well as the complimentary role assigned to television during this period to promote attendance at the live event. I found this ad in the Louisville Courier-Journal, the local promoter was former wrestler Jerry Jarrett, he was, at this time, affiliated with the National Wrestling Association (NWA), and thus, we should assume that the wrestlers listed were either contracted with the NWA or had been loaned out by whatever organization they had a contract with. The NWA promotional TV studio matches are listed at the bottom, airing on local channel WDRS-TV Channel 41. Television’s complimentary role is perhaps evident here in the relatively small size of the viewing information.

The fractured and regionalized nature of US wrestling in the late 1950s through to the 1970s hindered fans ability to follow the ongoing narratives and outcomes of wrestling outside their locale, an obstacle exacerbated by the fact that most newspapers did not cover wrestling in their sports section. Wrestling magazines and fan newsletters attempted to bridge this gap by reporting match outcomes to subscriber. However, with the advent of home recording technology that used video tape cassette cartridges like Betamax and VHS, wrestling fans were able to form a network of tape traders who would record, duplicate and share televised studio matches. One of the first newsletters to facilitate this was Wrestling Observer. Today, Wrestling Observer is one of the most respected wrestling news platforms online. Editor Dave Meltzer first began to publish and share his rankings of wrestling matches as part of his tape trading catalog in the late 1970s, and his impetus for Wresting Observer sprang from his tape trading practices. Wrestling Observer, as well as a host of other wrestling fanzines, such as Pro Wrestling Torch  or Canadian Championship Wrestling, came to function as a forum for fans to connect and trade wrestling match tapes with each other, as well as get updates on wrestling matches from around the world, as several participants, such as Meltzer, had contacts in Japan or Mexico, and would trade with other fans to get regional US matches on tape in exchange for international matches. 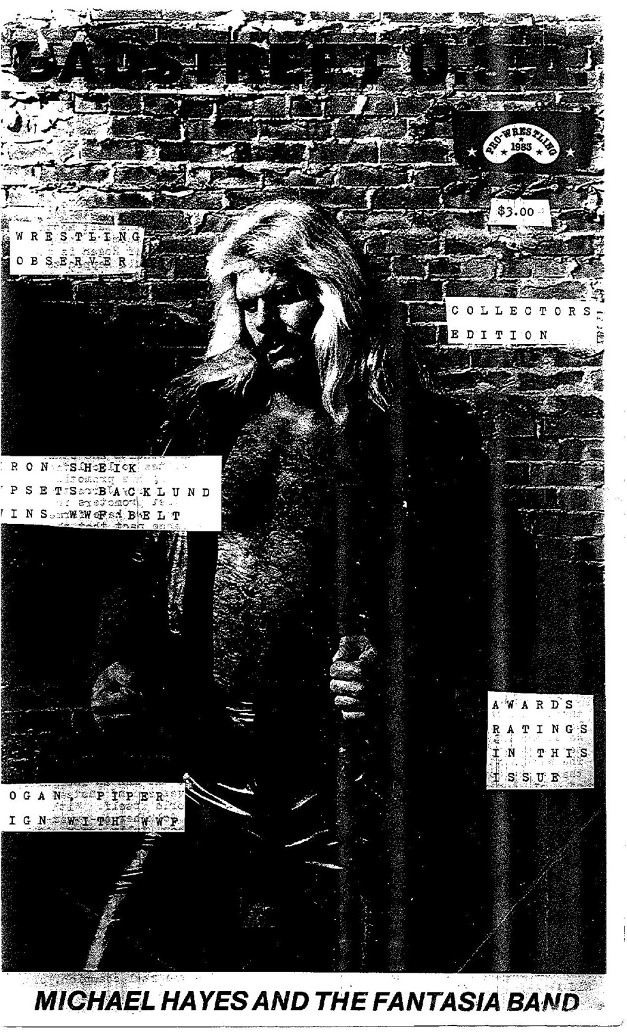 Excavating the history of tape trading professional wrestling demonstrates the ways in which tape trading came to specifically function as a distribution mechanism for televised wrestling beyond the region it was broadcast, especially prior to the rise of the WWF and WCW as national programming in the mid-1980s. Additionally, the materiality of video tape as distribution form is also significant. Fans connected through their network of newsletters, conventions, matches and word-of-mouth, and some of my interviewees shared that they would call each other after matches to report the outcome. While newsletters would publish weekly or bi-weekly result lists for the different associations and regions in the US, Canada, Mexico and Japan, fans still found it important to obtain and view matches so fans could have the sort of knowledge only available to television viewers. These aspects include interview segments, color commentary, visual performance of specific wrestling moves, verbal declarations, announcer commentary and audience engagement. There has long been a general acceptance and understanding within wrestling that outcomes are usually predetermined. Starting in the mid-twentieth century, wrestling organizations in the US came to define themselves with official athletic oversight bodies as sports entertainment, not competition. However, fans still judged and ranked wrestlers based on skill, athleticism, performance and charisma, knowledge best obtained by watching matches. One interviewee I spoke with confessed he did not feel he had enough time to view all the tapes he got, but he felt he needed to see what had happened, even after knowing the results, and would watch the matches using fast forward on his VHS remote. Indeed, many of the debates within wrestling communities rely on accumulated knowledge and historical awareness of wrestling matches, which is why you can still find VHS tapes of wrestling matches from the 1980s and 1990s on eBay or at specific collectors’ websites, like this one. This gets at the ways in which tape trading facilitated fan performance of knowledge and ability to legitimate their arguments and position about wrestling in debates within the fandom. The fact that tape trading now coexists with content posted on YouTube and available through subscriptions to digital platforms like the WWE Network speaks to the perceived value of historical play-by-play knowledge, and the perceived pleasure of watching and rewatching wrestling matches where the outcome is already known. In this sense, the history of tape trading wrestling TV also illuminates how audiences actually engaged with and formed affective relationships with televised wrestling and other fans in their everyday lives.