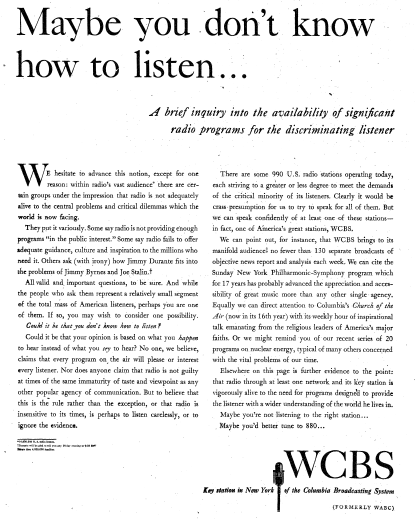 On November 3, 1946, WCBS—the flagship radio station of the Columbia Broadcasting System—ran a full-page advertisement with “Maybe you don’t know how to listen…” splashed across the top in an eye-catchingly large font. Almost 74 years later, as I was skimming through the pages of The New York Times for another research project, the advertisement again caught an unsuspecting reader’s attention. A full-page, wordy advertisement for a radio station that conveys a sentiment of “it’s not us, it’s you” was more than enough to pique my curiosity of what possibly could have made WCBS run such an ad.

The advertisement starts with the acknowledgment of recent, unspecified criticisms concerning radio’s inability to provide programming that “offer[s] adequate guidance, culture and inspiration to the millions that need it.”[1] However, the copy makes a slightly stand-offish turn by asking the reader if “your opinion is based on what you happen to hear instead of what you try to hear,” and postulating that a listener’s perception of radio being a medium that “is insensitive to its times” is a result of “listen[ing] carelessly, or [ignoring] the evidence.”[2] The advertisement includes a slew of programs that it considers buck the described criticism, and ends with suggesting that the listener ultimately is “not listening to the right station,” and should instead tune to 880, WCBS.[3]

I have turned to a bit of scholarship on advertisements (specifically, broadcasting-related advertisements) in an attempt to provide myself with an academic lens that could guide not just my analysis of this advertisement, but perhaps even help shed some light on the types of sources I could refer to during my quest for contextualization and understanding. Both Michele Hilmes and Cynthia B. Meyers have discussed the (often understatedly) massive role advertising agencies played during radio’s hey-day of the 1930s and 1940s, which essentially boils down to advertisers controlling a program, practically from soup to nuts.[4] As Meyers notes, this advertiser dominance within radio did not last forever. Around the time the advertisement in question was run (late 1946), the commercialism of and the advertiser’s place in radio was being reconsidered by networks, the US government, social scientists, and critics.[5] Each of these groups had their own incentives for and reasoning behind this “revolt,” as Meyers calls it, but one common thread is the notion of programming for public service.[6] From here, I’ve established a baseline for search for historical context. This advertisement clearly was not run out of the blue; it potentially could be a reaction to larger conversations surrounding commercialism and public service broadcasting, and Meyers has given me a few prime suspects I can look into as giving WCBS possible motive to push back against.

Locating (a bit of) Historical Context and Early Ruminations

As Meyers and others have noted, the post-war period of American radio was marked by a new (or, for some, renewed) prioritization of public service programming, which led to a number of groups to call for a rehabilitation of radio. The most high-profile of these crusades to reform radio was the Federal Communication Commission’s (FCC) Public Service Responsibility of Broadcast Licensees, more commonly known as “the Blue Book.” While the specifics and ultimate efficacy of the Blue Book can be discussed and debated in another forum, for my purpose, its mere existence as the product of a government-adjacent agency pushing for broadcasters to program in the “public interest, convenience, and necessity,” or else face possible issues when it came time to renew their broadcasting licenses, is noteworthy enough. With the FCC’s Blue Book making news headlines both in trade and popular press, it’s decently evident that this ad, which includes the phrase “‘in the public interest,’” is at least somewhat in response to the conversations surrounding public service programming.

Turning towards the industry, radio’s trade association, the National Association of Broadcasters (NAB), had their annual convention from October 21-24, 1946, just two weeks before the advertisement was published. At the conference, CBS chairman William S. Paley addressed the crowd with a speech that acknowledged the relative shortcomings of radio’s public service programming, and made a call-to-action for broadcasters to apply the same level of “ingenuity and imagination as we devote to entertainment shows.”[7] However, in the same speech, Paley acknowledged the criticism that was being lobbed at radio and called it justified, noting that only broadcasters themselves were to blame for its shortcomings.[8] Wait a minute….The advertisement—which was for WCBS, and touted itself as the “key station in New York of the Columbia Broadcasting System”—put the blame on listeners, not broadcasters….

Moving along to popular press, I searched the columns of notable New York-based radio critics, Jack Gould (of The New York Times) and John Crosby (from The New York Herald Tribune). In my research, I found that the advertisement ran in both the Times and the Herald Tribune, yet only Gould made mention of it in his column (did Crosby not comment on the ad in his daily column because his column was syndicated beyond the New York area? Did he think it was beneath his station?). According to Gould, the ad is a reflection of “persuasive self-righteousness,” that exhibited “broadcasting’s traditional condescension toward the highbrows.”[9] Gould continued lambasting WCBS, noting that “more than 70 per cent [of the programs listed in the advertisement] fall within time periods which radio knows[sic] enjoy a minimum listening audience—Saturday afternoon, Sunday morning, early Sunday afternoon, or late in the evening, etc.,” and argued this scheduling of programs forced listeners with a “selective” taste live to a “monastic existence.”[10] Ultimately, Gould concluded that radio as a whole needs to provide a better program balance during the popular listening hours of 6pm to 11pm, as if they “are the most popular listening periods for the majority, they are just as popular for the minority,” and that “if the discriminating listener is to enjoy emancipation, the primary responsibility rests not on himself but on those who hold him in bondage.”[11] Inappropriate equivalencies to slavery aside, Gould’s column further expands our considerations of the advertisement: we can think about broadcasters’ schedules, taste cultures, and accessibility in our analysis and understanding of this ad, public service programming, and other matters of the time. 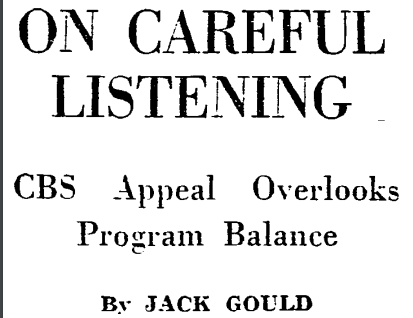 This short dive down a historical rabbit hole also isn’t just an exercise in contextualizing an advertisement. I view it also as a means to reconsider the ways in which I can use materials. Advertisements can be more than just paratextual or peripheral materials—they can also act as the focus of or launching pad for a project. I can turn to a critic’s work not just for a review of a program, but also commentary on a medium. Materials like advertisements, trade and popular press, critics’ columns, and conference proceedings are all multifunctional. While there will always be sources that I will not have access to (whether they don’t exist anymore, or perhaps never existed in the first place), this reconsideration and repurposing of materials that are available to us—especially during a time of quarantine—provides the potential to help flesh out a medium’s history from a micro- (and perhaps even macro-) level.