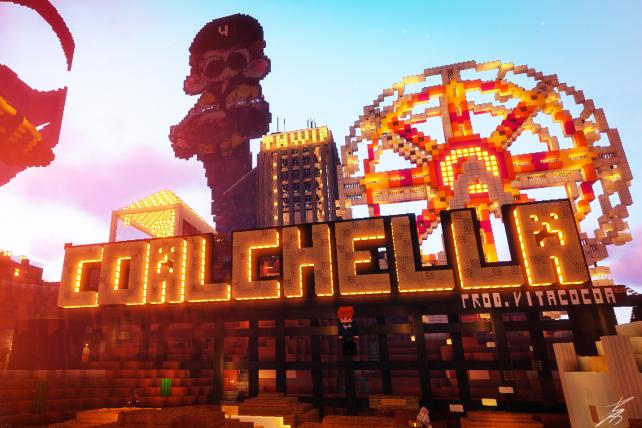 As music industry revenues radically shift due to COVID-19 related cancellations and the rescheduling of live touring aspects of the business, musicians have taken advantage of this time to test out various co-production techniques, increase their digital fan engagement practices, and host virtual hangouts and dance-parties. The latest of these experiments deals explicitly with this gap in the live music sector of the industry. Dubbed “the age of the virtual music festival” by Dazed’s Dean Mayo Davies, these events are positioned as the new frontier of the concert-going experience as the promise of virtual reality immersion becomes increasingly accessible.[1] These virtual music festivals, however, did not begin as a reaction to COVID-19 distancing measures, with some of the earliest examples coming from Berlin underground music collective Boiler Room’s collaboration with Google’s Daydream VR in 2016.[2]

Using dance music to form participatory structures aimed at strengthening and supporting collective politics is not a new phenomenon, as Open Pit is very much a part of a legacy of DIY innovators who used the affective and communal aspects of dance to create parties with a social and economic consciousness. Tim Lawrence’s Love Saves the Day: A History of American Dance Music, 1970-79 explores the pre-disco downtown party culture of New York City during the early 1970s. Detailing rise and fall cycle of iconic clubs such as the Loft, Sanctuary, Limelight, and Tenth Floor, Lawrence discusses the DIY roots of these early DJ cultures that utilized a “social and egalitarian model of making music in which the DJ played in relation to the crowd, leading and following in roughly equal measure.”[3] Early innovators including David Mancuso, David Rodriguez, and Steve D’Aquisto understood the role of the DJ was to create a sonic and spatial conversation with the audience, “a synergistic alliance” built through a co-production of mutual and equal ownership of the dancefloor.[4] This downtown party network quickly “formed a popular avant-garde that, in contrast to more insular cultural revolutionaries, wanted to spread their radical message rather than bask in their unpopularity.”[5] These creative ideologies of organic and equitable co-production very much reflects the “punk-edged Warholian electro-pop” sonic aesthetic of these virtual festival lineups.[6] With headlining acts like the “appreciate-everything-remix-anything” experimental pop duo 100 Gecs for their recent Square Garden festival, Open Pit’s lineups encompasses a new digital avant-garde that through their multi-valent job titles as DJ/artist/producer/promoter/event planner pays homage to the DIY ethos of dance music cultures of yesteryear.[7]

Connection within the context of these virtual music festivals operates as the organic product of the networked collaborations and creative co-productions echoed and enacted by Open Pit’s team. As the histories of early dance music illustrates however, these valuations of connection are also the social result of specific economic and cultural conditions that necessitate these spaces of bodily communion. Similar to how the popularization of discotheques in the mid 1970s were a reaction to “the conversion of industrial-based economies into neo-liberal markets,” the trend of virtual music festivals presents a framework of intersecting profit-based and creative ideologies of popular music industry in a society and economy depleted by a global pandemic.[8] Just as “work hard play hard” became the mantra of mid-70s consumer capitalism that necessitated the overcrowded dance floor, the self-entrepreneurial spirit of neoliberal flexible labor largely contributes to the participatory structures of the jammed virtual server.[9]

Recent political economy approaches to analyzing labor and commodity in the post-CD music industry provide generative frameworks to conceptualize the ideologies of capital implicit within Open Pit’s decidedly anti-capitalistic approach to music festival economies. Jeremy Wade Morris’s Selling Digital Music, Formatting Culture tells a history of technologies that construct the new digital music commodity. Rather than streaming devaluing or dematerializing music or previous business practices, Morris argues that digitization “transformed digital music files into conflicted, networked, information-rich, traceable, and manipulable cybernetic commodities.”[10] These “micro-materials” define a cultural understanding of these music economies as “free” when in reality, this “vision of computing as an act of personal expression and self-actualization” comes at an exchange of personal data and compliance with corporate surveillance.[11] Therefore, as these virtual music festivals are “free” in terms of monetary exchange, the cost of connection comes at a steep price for both the user and the artist-producer.[12]

Specifically addressing the precarities of the contemporary artist-producer, Leslie M. Meier’s Popular Music as Promotion: Music and Branding in the Digital Age explores the rise in “artist-brands” to examine the implicit economic logics of “360-degree monetization” of artists through sponsorship, licensing, and endorsement deals.[13] Meier argues as neoliberalist policies lead to greater privatization and deregulation, the flexible economies of post-Fordism only provide the record companies with greater mobility and profit, while enforcing precarious working conditions on artists. The promotional industries’ growing dominance over popular music illustrates that post-Fordism economic flexibility has constructed the artist-brand as a fiscal response to the digitization of music distribution under the guise of self-entrepreneurialism and customization, while Fordist industrial logics continue to reinforce rational utility of workers within this system of working artists’ commodification and exploitation.[14]

As Vice’s Lewis Gordon discusses in his article, “The Best New Music Festival Is in ‘Minecraft,’” Open Pit festivals like Square Garden are also beholden to the platform regulations and user agreements of Minecraft’s owner Microsoft. Gordon aptly points out, “Minecraft—a platform in its own right—enables such events to take place but their existence is contingent on Microsoft’s continuing goodwill and, more importantly, the synchronisation of mutual interests, the benefits of which will always be weighted in favor of the platform provider.”[15] While the promotional logics of Scott and Fortnite’s collaboration are much more transparent, this type of industry partnership presents a successful profit-based alternative to Open Pit’s egalitarian and communal festival economies. In the current music marketplace, where record labels and event companies alike are figuring out ways to recuperate massive loses in live music revenue, the feeling of connection in these digital spaces is a commodity quickly rising in stock value.

The latter-half of Lawrence’s history of early 70s dance music cultures illustrates that as the industry recognizes the value of connection within DJ-based co-productions of sound and space, the genre category of disco enforces commodified logics in production, reproduction, and circulation of these musical products. In connecting the trajectories of these early DIY dance music cultures, the creative ideologies of virtual co-production inherent in Square Garden and other virtual music festivals, and contemporary political economic approaches to digital music economies, I illustrate both the political power of DIY dance cultures throughout history while also presenting a cautionary tale for future industry intervention into this virtual music festival space.

As virtual music festivals are cost-efficient, immediately global in reach, and an environmentally friendly alternative, Open Pit’s events provide an inclusive and class-conscious reaction to the outpricing of fans while also presenting an ethical response to the large carbon footprint of these IRL festivals. In a way, this moment of collective understanding exposes the various inflations of the current music festival marketplace and reorients conversations around exchange values within the music industry. How talent buyers, concert promoters, booking agents, and labels choose to react to this cultural and economic moment of increasing concern for the collective will forever change the trajectory of the live music sector; a fiscally critical aspect of the contemporary music industry.