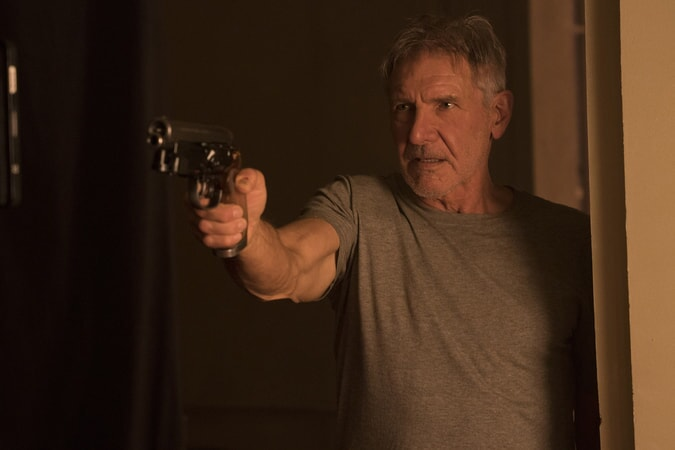 Harrison Ford reprises his role of Rick Deckard in Blade Runner 2049. Ford’s return to this and to the Star Wars and Indiana Jones franchises see his characters becoming fathers.

Having played and repeatedly reprised the role of charismatic rogue, Harrison Ford counts as one of Hollywood’s most popular franchise actors. His iconic characters Han Solo, Indiana Jones, and Rick Deckard have defined the Star Wars and Indiana Jones film franchises as well as two Blade Runner movies. Ford first portrayed these heroes in the late 1970s and early 1980s—the opportunistic smuggler Solo in Star Wars (Lucas, 1977), the adventurous professor of archaeology in Raiders of the Lost Ark (Spielberg, 1981), and replicant-hunting Deckard in Blade Runner (Scott, 1982). Until the late 1980s, he returned to play the roles in the Star Wars sequels The Empire Strikes Back (Kershner, 1980) and Return of the Jedi (Marquand, 1983), and in Indiana Jones and the Temple of Doom (Spielberg, 1984) and Indiana Jones and the Last Crusade (Spielberg, 1989). Several decades later, Ford brought the characters that made him famous back onto the big screen in Indiana Jones and the Kingdom of the Crystal Skull (Spielberg, 2008) (and a fifth installment that is currently scheduled for release in 2022), in Star Wars: The Force Awakens (2015, Abrams), and in Blade Runner 2049 (Villeneuve, 2017). In these franchise revivals, Ford’s characters return visibly aged, and, more importantly, they return as fathers.

Discussing the comebacks of aging white male actors such as Sylvester Stallone, Bruce Willis, and Harrison Ford in the new millennium, Philippa Gates identifies fatherhood as a common theme of franchise revivals. By resurrecting their most beloved characters from the 1980s—Rocky, Rambo, John McClane, and Indiana Jones—Gates argues, Stallone, Willis, and Ford managed to sustain their flagging careers. During the 1990s, the middle-aged, muscled action heroes these actors embodied had gradually disappeared from the box-office blockbusters, where a new generation of “smaller, slimmer, younger, and more sensitive action hero[es]” took their place (Gates 276). Gates speaks of a “shift to more vulnerable heroes in a retrospective apology for the ‘masculinity’ of the preceding decade” (276). Stallone, Willis, and Ford’s most recent movies accommodate this move away from the hard-bodied hypermasculinity of the 1980s at the intersection of aging and fatherhood. The films “explore the problems that arise when the will is strong but the flesh is not so, when fathers have grown apart from their children, and when lone heroes can no longer fight evil on their own” (277). In her book Postfeminism and Paternity in Contemporary U.S. Film (2014), Hannah Hamad suggests that fatherhood not only “enables the staging of credible reentries into the star landscape” (71). Fatherhood also “negotiates an otherwise abject process of physical decline and social obsolescence, instead recasting it as a boon for heretofore derogated aging masculinities” (27). And fatherhood, one could add, makes perfect sense because it fuels the storytelling engine of Hollywood’s decades-spanning franchise cinema.

Hypermasculine action heroes of the 1980s, such as Rambo, began to disappear in the 1990s in favor of more sensitive action heroes.

Hollywood’s model of cultural reproduction is defined by a serial logic of repetition, continuation, and renewal. The enduring popularity and profitability of long-running film franchises hence depend on the return of familiar characters and actors, while the passing of time simultaneously introduces an element of generational renewal into ongoing narratives (see Loock, “Reproductive Futurism”). Unless, of course, filmmakers opt for a remake, prequel, or reboot, i.e., forms of innovative reproduction that break with narrative continuity and the franchise’s linear understanding of time (or, if they rely on digital de-aging technologies). The serial unfolding of individual installments over many years and decades, however, must address temporal constraints and account for the aging of stars. This, too, explains how fatherhood and the theme of generational succession have emerged as key elements in the resurrection of 1980s action heroes. Their purpose is to keep the story going: son-figures (or substitute sons) serve as sidekicks that attract younger audiences, while the older action heroes (who tend to be acutely aware of their aging bodies) speak to the earlier movies’ original audiences and exert cross-generational appeal.

In the case of Harrison Ford’s franchise characters, I argue, fatherhood presents an unexpected narrative twist that leads to comic, awkward, or simply weird encounters with their respective franchise offspring. Unlike Rocky, whose son Robert Balboa, Jr. is born in Rocky II (Stallone, 1979) and can be seen in every sequel after that, or John McClane, whose children Jack and Lucy make their first appearance in Die Hard (McTiernan, 1988) and take on prominent roles in the two latest installments Live Free or Die Hard (Wiseman, 2007) and A Good Day to Die Hard (Moore, 2013), neither Indiana Jones nor Han Solo nor Deckard have been family men in the earlier movies. Their returns as fathers in franchise revivals are therefore puzzling—for audiences and, to a certain degree, for the characters themselves. Indiana Jones is completely unaware that he has a kid, Han Solo is estranged from his son, and Deckard believes that he must be absent as a father in order to protect his child. 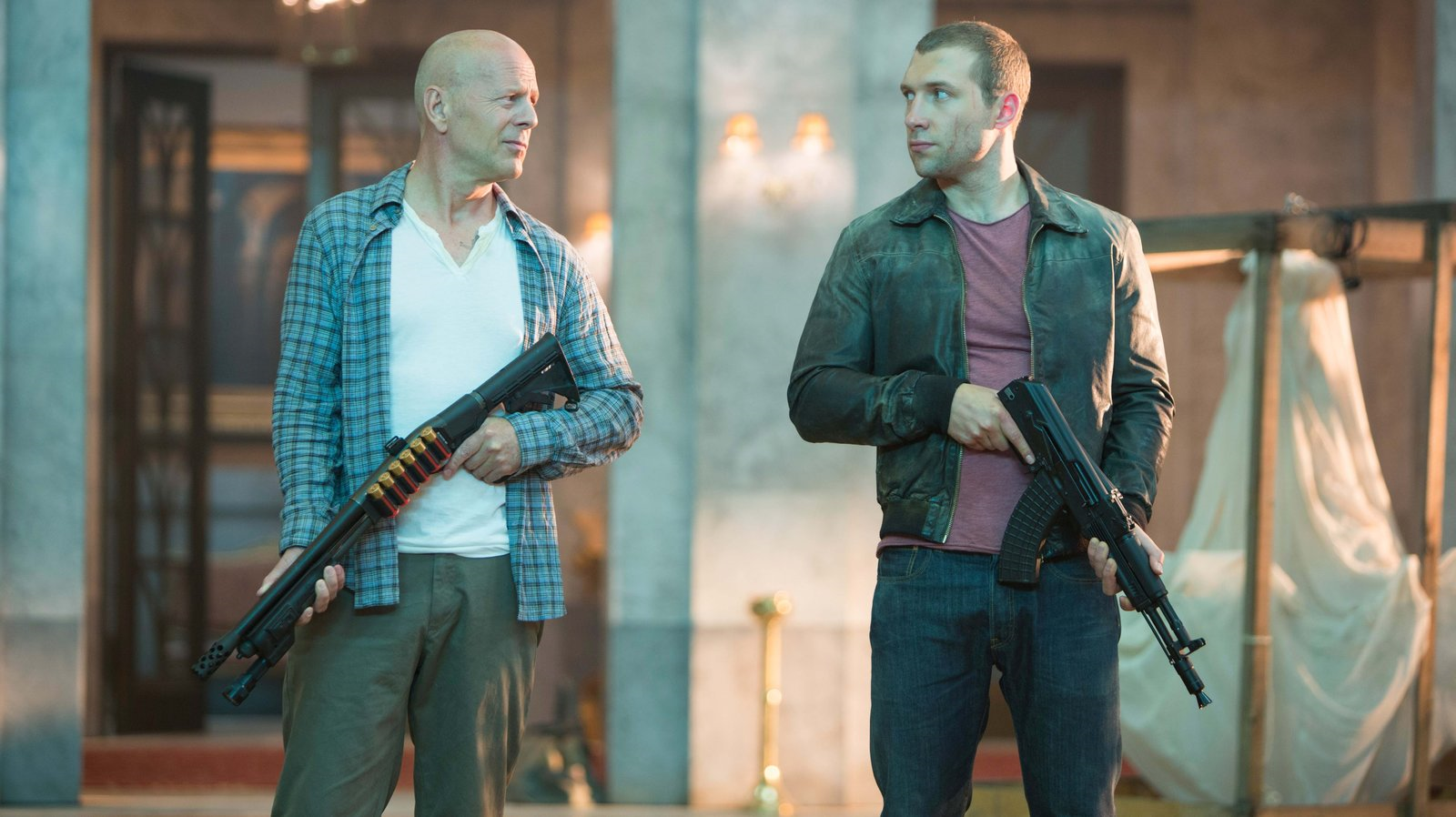 John McClane’s children, who originally appear as young children in Die Hard, are adults and central to the plots of later films in the franchise.

In Indiana Jones and the Kingdom of the Crystal Skull, Indy first discovers that his young sidekick Mutt Williams (Shia LaBeouf) is the son of Marion Ravenwood (Karen Allen), his love interest from Raiders of the Lost Ark, and is shocked when he later finds out that he is, in fact, Mutt’s father. Marion tells Indy about his son while they are both sinking into a dry sand pit. Once they escape from the life-threatening situation, Indy immediately takes on the responsibilities of fatherhood. Following traditional gender scripts and nostalgic ideas of family, heterosexuality, and reproduction, he insists that Mutt goes back to school (although he had previously encouraged Mutt’s free lifestyle) and marries Marion at the end of the movie. The Force Awakens presents Han Solo and Princess Leia Organa (Carrie Fisher) as failed parents of their already adult son Ben Solo, who now calls himself Kylo Ren (Adam Driver). Trained to be a Jedi by his uncle Luke Skywalker (Mark Hamill), Ben is seduced by the Dark Side and eventually murders his father Han when Han tries to convince him to renounce the Dark Side. In Blade Runner 2049, Deckard knows he has a daughter with replicant Rachael (Sean Young)—the first (and only) replicant-born baby. Rachael dies during childbirth, and Deckard keeps his distance from Ana (Carla Juri), who grows up in an orphanage and with foster parents to become a memory designer for the Wallace Foundation. Deckard is convinced that “[s]ometimes to love someone … you gotta be a stranger,” and only reconnects with the adult Ana at the very end of the movie.

For Harrison Ford’s characters, fatherhood doesn’t involve any actual parenting but instead sidesteps the paternal premises of postfeminist fatherhood in contemporary media culture (e.g., the men’s presence in the lives of their children and active involvement in taking care of them). Here, it serves as a narrative device that enables Ford’s comeback and ensures the continued existence of his franchises and their cultural and economic viability. The kids stand for the continuity and generational renewal of the franchises, and yet these revivals do not necessarily function as ‘legacyquel’—a “very specific kind of sequel […] in which beloved aging stars reprise classic roles and pass the torch to younger successors” (Singer; see also Albarrán-Torres and Golding; Loock, “Reboot”). When Mutt picks up his father’s iconic fedora and wants to put it on at the end of the movie, Indy makes sure that it stays on his own head “in a labored refusal,” as Hamad writes, “to cast Jones’ aging masculinity in terms of obsolescence” (77). Han Solo reappears in The Rise of Skywalker (Abrams, 2019), and Deckard’s reunion with his daughter Ana at the end of Blade Runner 2049 leaves ample room for further installments. These franchise revivals rely on the increased visibility of fatherhood and its reconfiguration as ideal masculinity in a postfeminist mediascape, but their representations of father figures seem to contradict related paradigms of involved fatherhood for the sake of franchise logic.

Singer, Matt. “Welcome to the Age of the Legacyquel.” ScreenCrush 23 Nov. 2015: http://screencrush.com/the-age-of-legacyquels/.