On Wednesday, October 16th, the Subcommittee on Communications and Technology and the Subcommittee on Consumer Protection and Commerce of the Committee on Energy and Commerce convened for a joint hearing of said committees in the Rayburn House Office Building, where most such hearings take place.[1] Largely unremarkable to the general public, particularly against such other governmental high proceedings as the building impeachment case against President Trump dominating the news, it likely went unnoticed by you, the reader. This is no surprise: despite its expansive and perhaps overly optimistic title, “Fostering a Healthier Internet to Protect Consumers,” the conceit of the event was actually much narrower in scope and of interest to a much more specialist, if not wonkier, crowd. The focus of the hearing was primarily on the specificities of a particular portion of legislation from the 1996 Communications Decency Act known as Section 230. Accordingly, those assembled as witnesses to the committee on the morning of October 16th were, to those who follow the barometer of public opinion toward Section 230 (as do I), recognized as a cavalcade of stars—for and against altering or elimination of 230 altogether, which quickly became the theme of the day.[2]

Despite the fact that this event, and others like it (carried, if it merits enough interest on a channel like CSPAN, but more likely accessible primarily via a government live stream and through written testimony) must assuredly constitute what stands for the phrase “inside baseball,” when it is derisively levied against conversation so esoteric as to shut others out, I am using this occasion of my FlowTV column debut to argue that few portions of legislation are so key to the nature of the internet as we currently know it: commercial, opaque, global and controlled by few. If you take me at my word, it would therefore stand to reason that any change to the legislation would undoubtedly yield in a status quo shift that, depending on where you sit in your relation to Section 230, would either free the internet from an American corporatist stranglehold, irrevocably destroy it as it devolved into a useless cesspool of unfettered “free expression,” or…something else. For this reason, what may, at first blush, appear to be a case of nothing more than D.C. wonk inside baseball is actually incredibly important, and more of us should be engaged in understanding what Section 230 is, what it has been, and what changes to it might mean. For something that most Americans may have never heard of, its power is immense, and it is now being wielded in new ways.

In 1996, as Congress hurried to respond to the moral and technological panics being wrought by the widescale adoption of internet service to the masses (and the concomitant and probably realistic suspicion that hardcore pornography was its primary engine), it passed the Communications Decency Act of 1996, believing that it was not possible to rely on extant telecommunications legislation to contend with these new media forms. Yet arguably its most enduring legacy (after its indecency mandates later faced, and lost, court challenges) came in the form of an addition to it, Section 230, which, in 1996, gave so-called “internet service providers” (or ISPs) largely total immunity in terms of being held responsible for material transmitted through their services. In the late 20th century, when ISPs were primarily and quite literally banks of modems that one dialed up from home to connect to a larger internet offering a variety of user experiences bounded mostly by technology, first, and imagination, second, this provision made good sense. Few could have conceived of an internet landscape dominated by a handful of powerful American companies who not only transmitted user-generated content, or UGC, but actually solicited it at a scale unimaginable to those of one generation earlier. And so Section 230 became a powerful mechanism by which the internet, dominated by private companies and their new services, and enhanced by those firms’ ingenuity and technological prowess, as well as a cozy relationship with the federal government, exploded. Since that time, the firms themselves and those who support them, as well as a host of lobbying groups from the Electronic Frontier Foundation to the American Civil Liberties Union, have actively and vociferously resisted any encroachment on Section 230 that might change the firms’ immunity, the very thing that has largely afforded them absolute discretion to decide what stays up and what must come down on their platforms. The resulting regime—the policies, practices and people actually implementing that discretion—is what is known as commercial content moderation, itself the subject of constant and polarized debate.[3]

EFF’s feelings about Section 230 are clear.

With this background in mind, it may now seem more critical than ever to understand it in order to better understand the contemporary American-dominated commercial internet ecosystem, how it has come to be, and under what logics (legal and otherwise) it is constituted and reconstituted. It also therefore becomes key to understand where various players invested in debates around the control of the internet sit, particularly with regard to its status quo as relatively underregulated in the American context, and in the endurance of an unmolested Section 230. To this end, the October 16th hearing was fascinating.

Upon a recent visit to Australia, I had occasion to speak to tech reporter and radio host Ariel Bogle about my work on the commercial content moderation of social media. She asked me, rightly, if the sum total of platforms’ content moderation rules, use policies, engagement in markets, and so on, constituted a form of American “soft power”[4] being meted out around the globe. I agreed, and described how the resulting patchwork of rules, affordances, operations and policies—not to mention the siting of commercial content moderation call centers around the globe—could fairly be considered as an example of American hegemony, tightly wrapped up and packaged, then exported seamlessly, in the form of technological platforms that rarely easily betray the politics embedded in their functionality and affordances, never mind in their prohibitions and constraints.

As I watched the House Subcomittee hearing on October 16th, hearing Boston University legal scholar Danielle Citron and Berkeley computer scientist and creator of PhotoDNA technology Hany Farid argue for sensible rethinking of Section 230, I was fascinated to hear the pushback. It came, predictably, from EFF Legal Director Corynne McSherry, whose organization has long been resistant to the notion of any tampering with Section 230. And it also came, no surprise, from Google’s representative, Global Head of Intellectual Property Policy Katherine Oyama. And yet, even an old cynic such as myself was surprised by what I heard.

In her statement, Oyama wasted no time in mentioning the positive economic impact to the United States that the tech (internet content) industry brings, with the both overt and latent suggestion being that it is Section 230 itself that fosters this incredible remunerative benefit—a powerful reminder to lawmakers who go to Congress and stay there largely on their ability to generate a healthy economy for the country.[5] 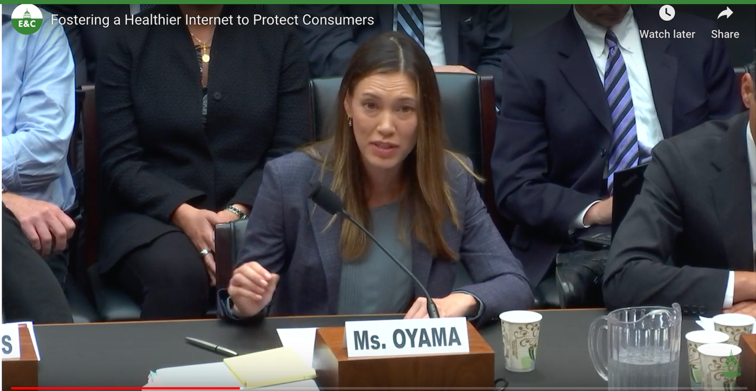 But it was in the subsequent back-and-forth questioning of the assembled experts by the Committee that took me by surprise, when, at a number of points in their dialog, Oyama made it clear that while Section 230 was under discussion and even ostensibly up for debate and review in this very House panel, Google and others were lobbying powerfully for section 230-like language to be included in trade agreements with countries like Japan and Mexico—trade agreements that largely remain secret and certainly that the American public, nor the citizens of their trading partners, have very little ability to intervene upon.

This was a fascinating new bit of information for me: outside of a fairly small group of specialists, many legal scholars and policy advocates who work in the social media or tech space have indicated a certain disinterest in conversations about 230 because they rightly point out that it is an American statute and therefore only pertinent in the context of the United States. Given that social media firms emanating from the United States are, more and more, subject to jurisdictional demands from outside the country, they have argued to me that the impact of Section 230 is destined to lessen as the demands from elsewhere ramp up.

Yet, as this testimony unequivocally proved, we learn that it is not simply a de facto and waning exporting of the US legal norm but it is indeed a literal exporting of it—codified in trade agreements that are developed and ratified far beyond the reach of citizens who are ultimately subject to them. The soft power of United States-based tech and social media firms therefore goes far beyond just what is seen on the user-facing side and, in fact, must now be tracked and traced through its extensive lobbying practices, as it urges representatives of the United States in trade and commerce agreements to force “partners” to adopt Section 230-like measures in their own countries. If this does not constitute the soft power of American tech firms, I am certain I do not know what does.